Zoom (ZM) will reports its fiscal Q4 earnings today after the close. The options market is implying about a $44 (about 11%) move between now and Friday’s close, most of that is for tomorrow’s post-earnings response. With the stock near $402.50, the March 5th weekly 402.50 straddle (the call premium + the put premium) is offered at about $45, or about 11% of the stock price. If you were to buy the implied weekly movement, you would need a rally above $447.50 or a decline below $357.50 by Friday’s close to make money.

Shares of ZM are up 19% on the year, but still down about 32% from its all-time high made in mid-October. The stock found some technical support last week at its 200-day moving average, after a brief breach of the uptrend that has been in place since the spring: 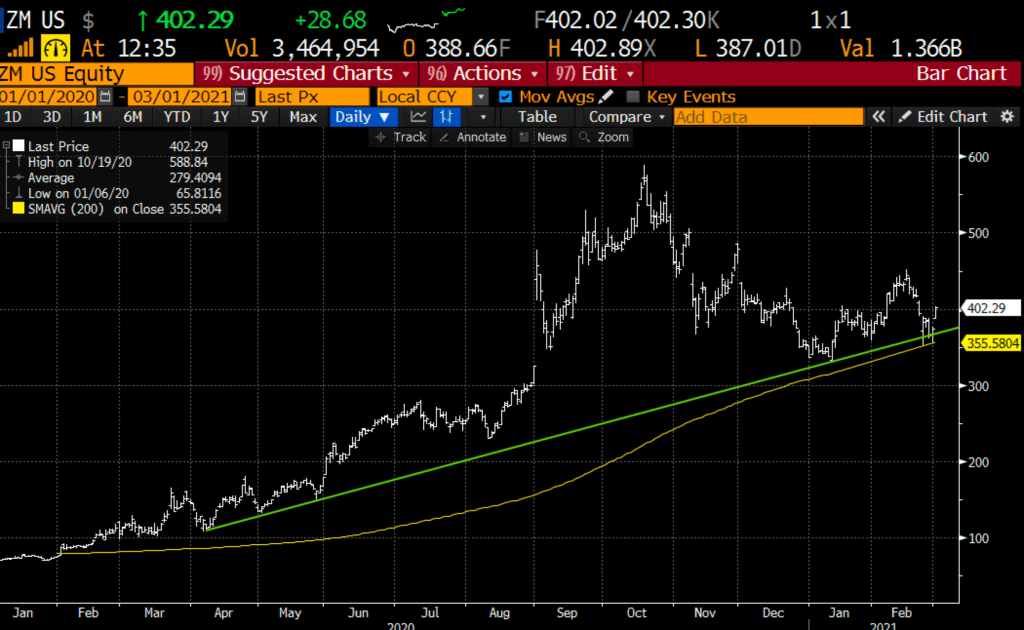 Wall Street analysts remain rather mixed on the stock with 11 Buy ratings, 15 Holds, and 3 Sells, largely the result of the stock’s valuation, trading at 135x next year’s expected eps and 33x expected sales (only expected to grow around 40%).  Deceleration will be a big story for companies like this that saw mass adoption due to acceleration during the pandemic.

SO what’s the trade? Your guess is as good as mine. With the stock up 8% as I write, the margin for error might be a tad narrow. For those with conviction about a directional move, then with at-the-money calls or puts in the weeklies, you would only need the stock up or down about 5.5% in the next four trading days to make money. That sounds like a lot, but not really in a stock like this, that moves a few percent a day when there are not earnings the night before, and has moved about 15% the day following its earnings since going public nearly two years ago. The company sold 5.6 million shares in January at $340 a share in a secondary offering. I would expect them to continue to raise a war chest as they are profitable, have basically no debt and will want to make acquisitions to broaden out their offering to better compete with large incumbents like Microsoft, Cisco, Google, and Salesforce, but I would not expect that to come for another few months, unless the stock was back above $500 soon.

If I were long the stock, and worried that any meaningful deceleration in growth of earnings, sales and users could cause a break of the uptrend and have the stock on its way back to $300, I might consider a collar, selling 1 out of the money call and using the proceeds to buy 1 out of the money put (vs 100 shares). I say this being cognizant that a 100 share position is a $40,000 position, but with a stock like this, that was $100 a year ago, there are many shareholders who have seen significant gains and might want to define their risk to the downside. To do this with a collar, with the intent of a low or no premium outlay, one would need to give up some potential upside, via the short call to achieve that, for instance:

Gains of the stock up to $500, or $97.50, stock called away at $500, up 24% in a little more than a month in a half, but on April expiration if the stock is above the short call strike, the long holder could always cover the short call to keep the long stock position intact.

Rationale: this sort of hedge strategy makes sense for long holders who do not want to pay for protection but are willing to give up some potential upside for defined risk on the downside. In this instance, the skew is towards the calls, meaning that it costs more for uspide than it does for the downside, which is allowing a 27.50 differential between the call strike vs the put strike, which is attractive.