What a Hunk of JNK

My good friend Peter Boockvar, CIO at Bleakley Advisors and author of the blog, BoockReport.com had a note out this morning with a mention of the price action in corporate bonds:

I talked yesterday about the record high duration in US corporate bonds and LQD yesterday, the IG etf, sold off for the 3rd straight day, by .7%. The close matches the lowest since June. The yield to worst of the Barclays IG index at 1.95%, still microscopic but is at the highest since mid-November. It was at 2.60% one year ago.

Here is the LQD over the last month, while not particularly significant in percentage terms it shows a clear sentiment shift: 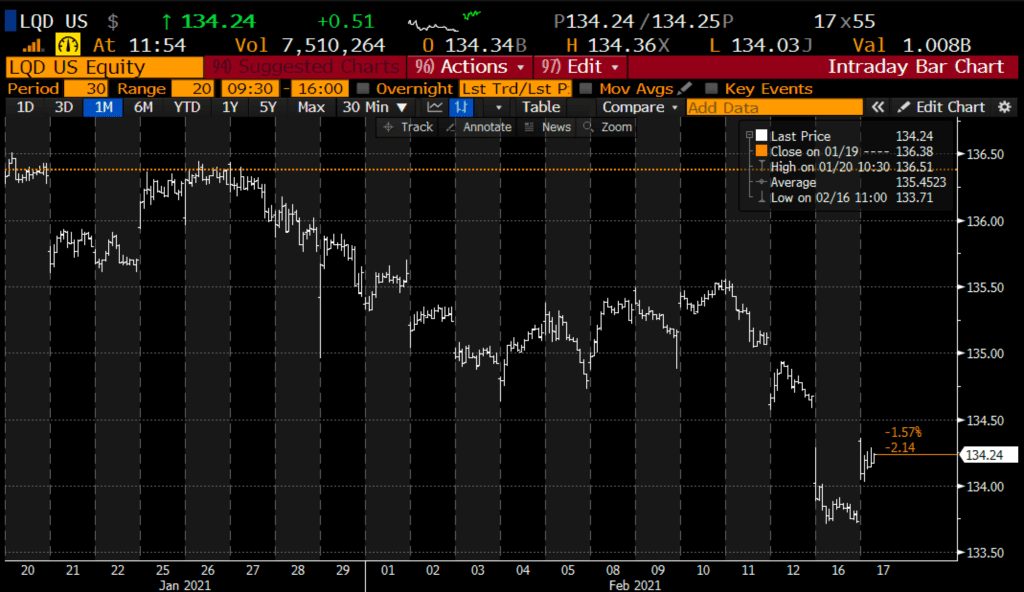 Looking at the LQD over the last ten years, there has clearly been volatility, but generally in a wide consolidation. The last bottom prior to the covid crash came the last time market participants were worried about rising rates in late 2018: 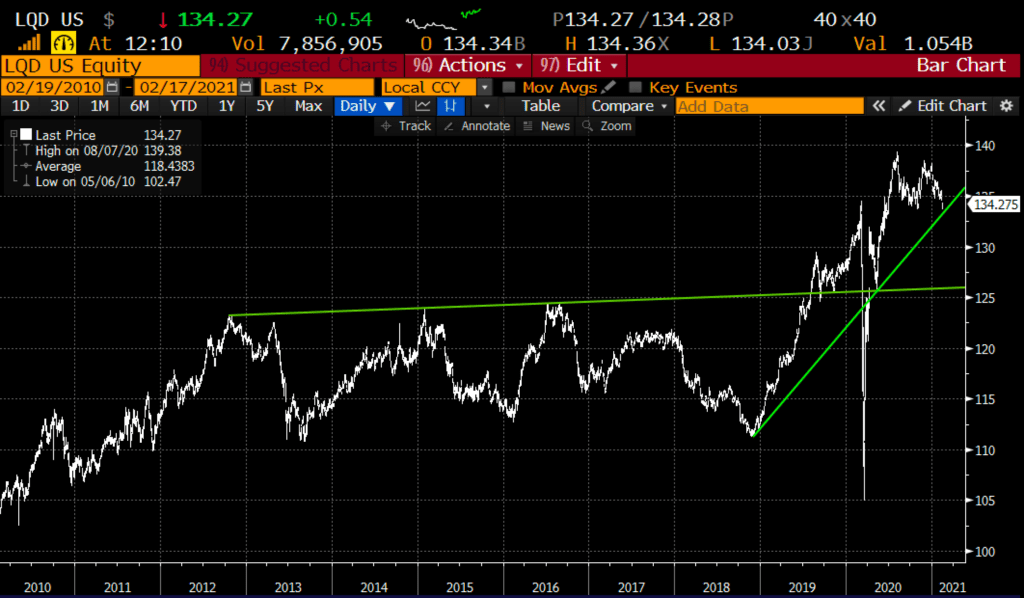 The chart below is the two-year chart of 30-day at the money implied volatility in LQD, as you can see prior to the covid crash a year ago, there was not a fear in the world as related to this product, with vol in the low single digits. Since the summer though, despite the series of lower highs and lower lows, implied have been re-set to the high single digits, likely due to more thorough hedging via this etf (and its options).

This leads me to a different place in the risk curve, high yield, and Junk… there is an etf for that too, the JNK, the SPDR Bloomberg Barclays High Yield Bond ETF.

In my email exchange with Peter this morning I said I was looking at LQD and JNK vol last week.. his response, “And the market will get to JNK soon if yields continue to rise”.

Last week I tweeted a few stores and on high yield and junk debt demand:

Have at it. Completely mental.

Money managers are having such a tough time getting their hands on debt in the $2.8tn market for junk bonds and leveraged loans that they’re calling up companies and pressing them to borrow, instead of waiting for bankers to bring new deals to them https://t.co/HjE6ZMLZd6

“The way the mar­ket is view­ing this right now is ba­si­cally say­ing, if all these triple-Cs can ac­cess fund­ing, they’re not go­ing to de­fault…The prob­lem is in­vestors are “hop­ing that this ar­gu­ment will work longer than it prob­a­bly will.”https://t.co/8SdYQeOo0m

Ok, so you get the point. While the JNK has not made a new 52-week high yet, it is less than 1% away, and for the life of me, I can’t think of a good reason why it would… 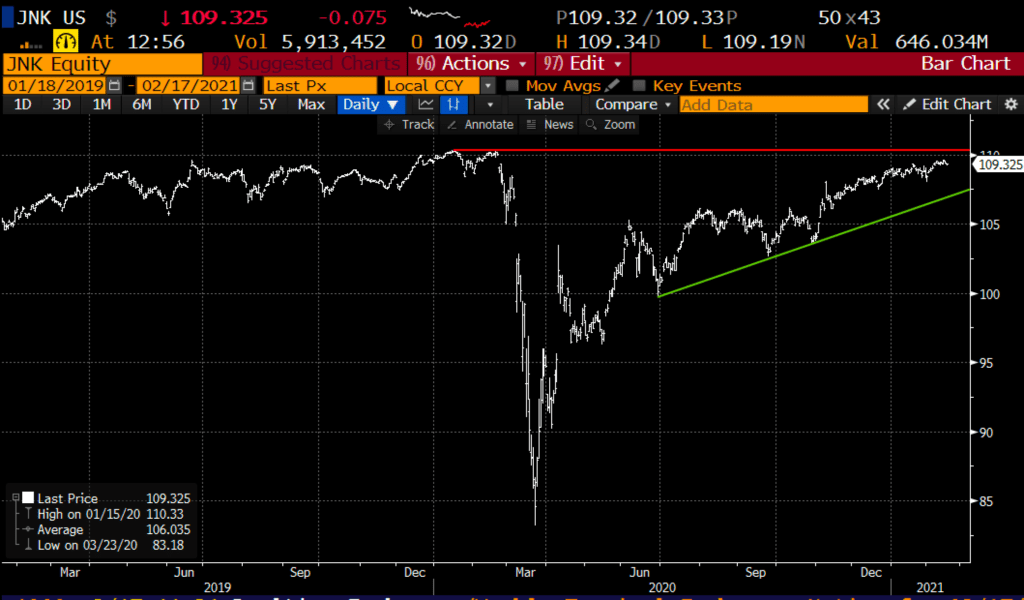 And if the 10-year treasury were to push through long term resistance, I could see alarm bells going off in varying places across the risk curve, first and foremost Junk Debt: 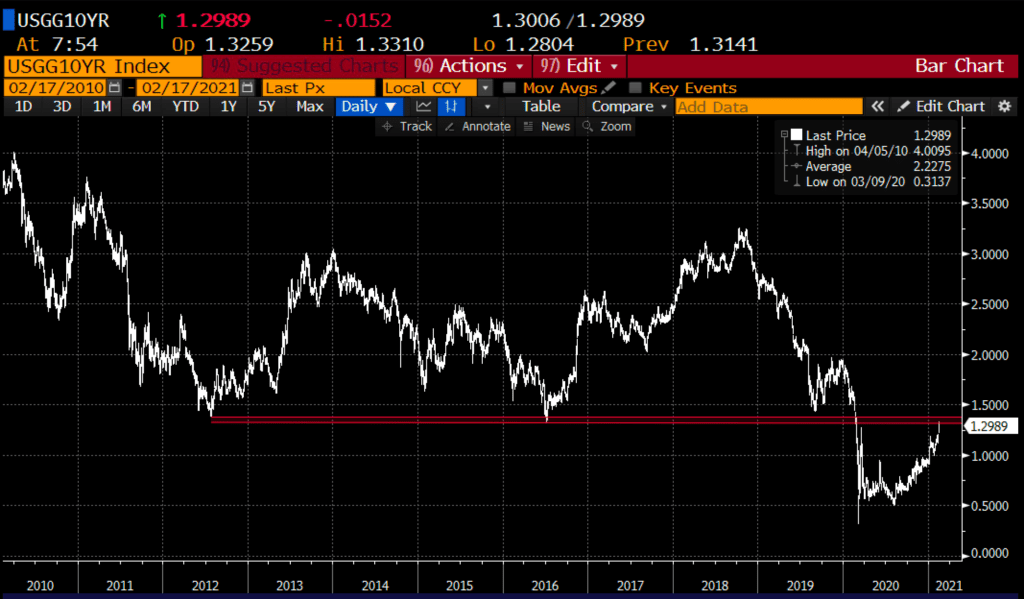 30-day at the money implied vol in JNK just bounced off of a 52-week low, vol is cheap on an absolute basis and relative to investment-grade… which seems odd to me.

So what’s the trade? If you are like me and think almost every risk asset is being explained away, the goalposts being moved, the rationale for pressing the long increasingly become YOLO, then spotting cheap vol and looking to lay for dislocations makes sense, JNK seems like a good as spot as any in my opinion.