In The Money with Fidelity Investments: XLI, UUP, TSLA

Macro: What the Fed Said, not what they did will be the big takeaway for market participants. Since Fed Chair Powell confirmed in an appearance on Capitol Hill in early April that the Central Bank would raise interest rates by a half a point at the May meeting, the stock market careened lower, closing the month down 9% in the S&P 500 and down 13% in the Nasdaq. If the Fed signals that its intent remains to tamp down inflation, but they may be less aggressive given the uncertain backdrop of the headwinds to the global economy, then stocks will likely rip the way they did following the March Fed meeting. But if they are to remain very hawkish then we could see a re-test of the recent lows and the continuation of a valuation reset for stocks that continue into the summer. A proper bear market.

Trade Idea #1: If the Fed is to remain intent on staying very hawkish in the near term in battling inflation, the fear is that they hike the U.S. economy into a recession. One group that could be particularly hard hit in that scenario is industrial stocks. The XLI, the etf that tracks the group is down in line with the S&P 500 from its highs, about 13%, but in my opinion could have risk to the mid to low 80s if Q2 economic data continues to get worse and investors start to price in the higher probability of a recession if we were to get a surprise Q2 decline in GDP, as we did in Q1. 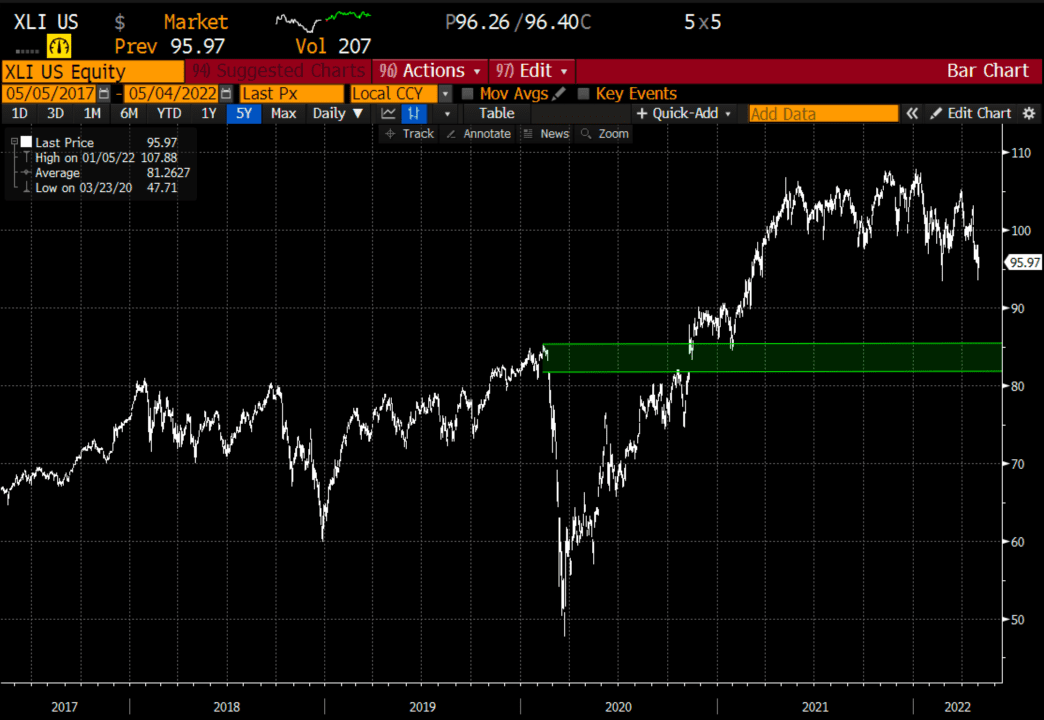 Rationale, This trade idea risks about 2.5% of the etf price and has a max potential payout of 3 to 1 the premium at risk if the etf is down 10% in two and half months.

Trade Idea #2: The first week of April I detailed a bullish trade idea in the UUP, the etf that tracks the U.S. Dollar.

Rationale: this trade idea risks a little more than 2% of the etf price but by rolling the prior gains we are actually reducing the premium at risk.

Lookback #2 – On March 23 when shares of TSLA were trading $995 I detailed a hedge idea for long holders of the stock:

Now with the stock near $900 it makes sense to manage this hedge idea. The stock is down 95. the May 1200 call that was sold at $34 can be covered for ~$1, and the put protection, the 830 put is worth about $28. it could make sense to roll this position out, taking the more than $27 gains and looking for a similar collar in June.