In The Money with Fidelity Investments: XLE, XLK, FXI

Macro: A few months ago as the Covid-19 vaccine rollout was becoming more widely available in the U.S. and other parts of the developed world it was widely believed by many economists and market strategists that the global economy would be inflecting higher given the trillions of dollars in both fiscal and monetary stimulus with the tailwind of pent up demand by both consumers and corporations. Equity and debt investors alike hit the pause button this week as fears of further mitigation attempts to combat the spread of the delta variant and have been evident in slowing economic data in China.

As a sort of proxy for global growth, keep an eye on Crude Oil, which last month broke the uptrend that was in place from its early Nov lows and now is threatening recent technical support just above $65, with the next real level of support near its 200-day moving average near $60: 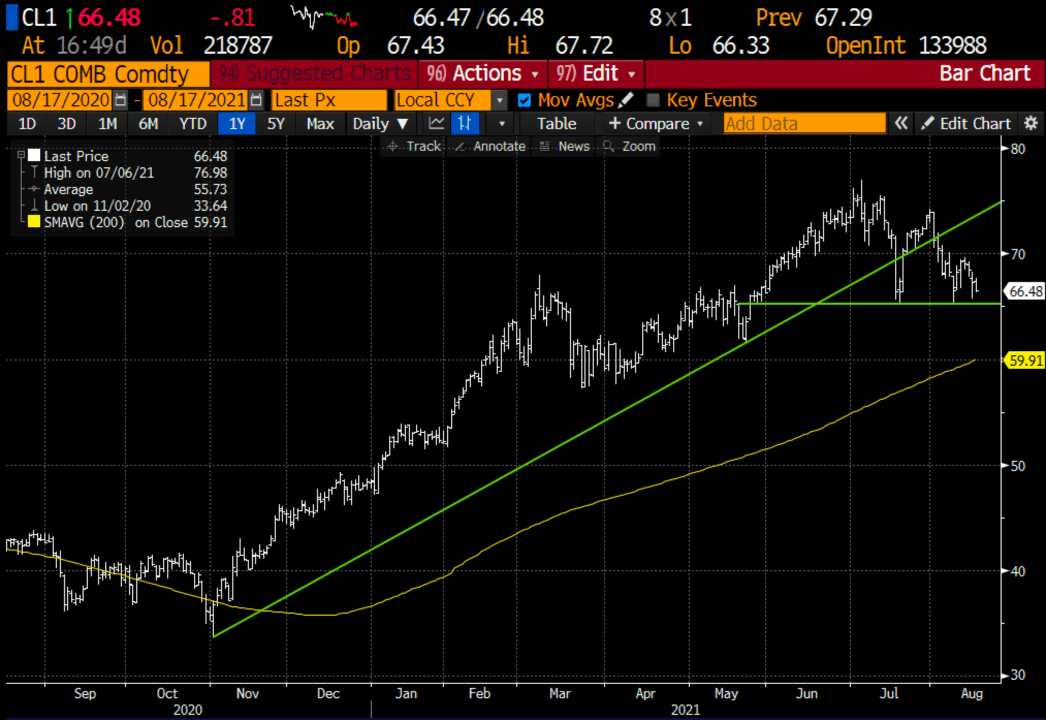 Trade Idea #1: Sell large oil stocks… the XLE, the S&P Energy Select etf has two stocks XOM & CVX that makeup nearly 50% of its weight. The chart of the etf is a bit of a trainwreck after breaking the uptrend from its October lows and now approaching its July lows near its 200-day moving average. 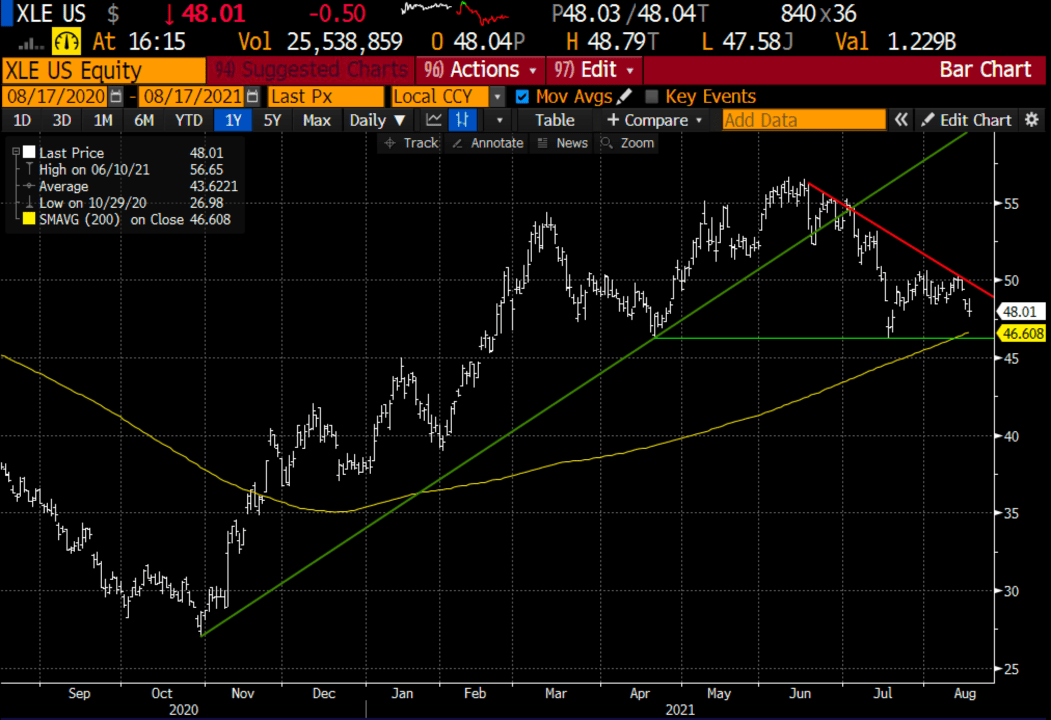 Rationale: this trade idea risks less than 3% of the etf price, has a break-even down 2.5% with a max potential gain of almost 6% if the etf is down ~9% in a month

Lookback #1: two weeks ago I detailed a bearish view on the XLK the etf that tracks the tech sector where AAPL, MSFT, and NVDA make up nearly 50% of the weight. Here was the trade idea from July 28th when the XLK was $153.30:

Since then XLK has did make a brief new all-time high and remains in the consolidation range of the last few weeks, but it is on the other side of the uptrend from its mid-May lows. 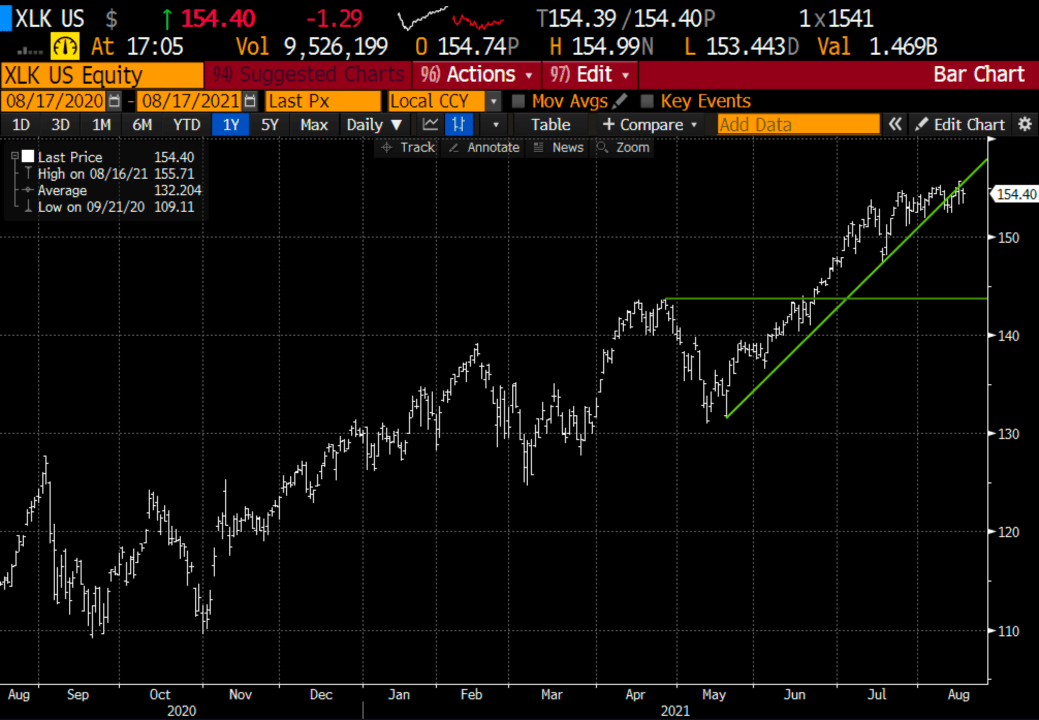 Today after the close NVDA, the third-largest holding in the XLK will report Q2 earnings, which are widely expected to be good. If the company were to disappoint on the quarter or guidance this could be the final straw to break this etf’s back and possibly cause AAPL to retrace some of its recent gains.

I like this short-biased trade idea better now than I did two weeks ago.

The breadth in the Nasdaq is bad, less than 50% of the Nasdaq components are above its 200-day moving average, vs the SPX at 84%

With the XLK near $154.50, up about 1% from the time of this trade, the Sept 150 put is now worth about $1.70, almost 50% of the premium originally paid. It makes sense to roll this up to a closer to the money strike, take a partial loss on the Sept 150, and buying to open the Sept 153 for about 2.50, increasing the probability of success on Sept expiration.

Lookback #2 – On July 29th I detailed a defined risk way to play for a bounce in large-cap Chinese stocks via the etf, FXI:

Now with the FXI $40 the Sept 41 all is worth 70 cents, it makes sense to cut your losses near the mental stop of about 50% of the premium paid for the initial trade. 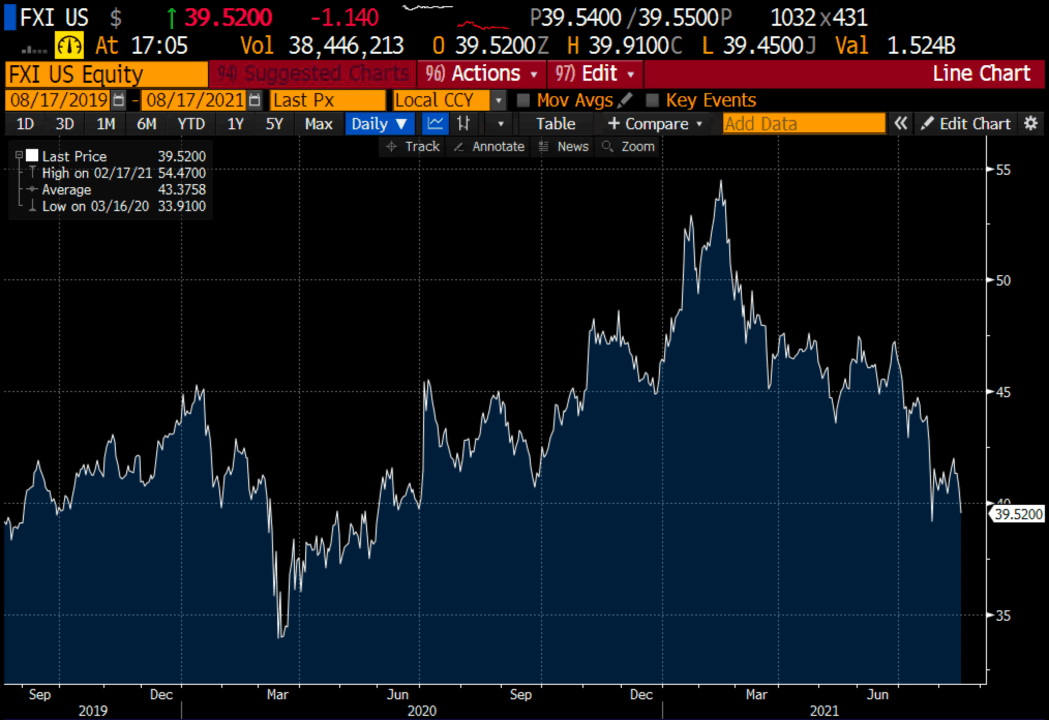