In The Money with Fidelity Investments: WMT, RIVN, AAPL

Macro: Stocks are trying to find some footing after a brutal four and half months, with the S&P 500 briefly touching the down 20% mark from its all-time highs made in January and the Nasdaq kissing the down 30% mark from its all-time highs from November, both have bounced more than 5% from last Thursday’s lows. Investor sentiment was downright horrible last week, with many readings nearing the 90th percentile, a bounce was inevitable. But now investors have to piece together how last week’s lows become THE lows in this bear market. I would submit that the lows won’t be in until Wall Street Analysts and Strategists capitulate on S&P Earnings estimates, which currently sit at 10% growth for 2022, and lower the estimates to account for 40-year high inflation, much higher interest rates, continued supply chain disruptions and the potential for a recession in Europe as a result of the War in Ukraine and possibly one here in the U.S. before.

Trade Idea #1: WMT – LONG – Yesterday one large important retailer in the U.S. and in China did just that, before giving analysts who cover the stock the chance to do so, Walmart (WMT) missed on the quarter just ended, and guided down for the balance of the year, citing the difficult macro environment, sending the stock down 11% the day after results. This is a massive reset to expectations and could set the stage for a beat in the months to come and a reversion back to the midpoint of the 18-month range near $145 which would also be a refilling of its earnings gap, near its 200-day moving average. 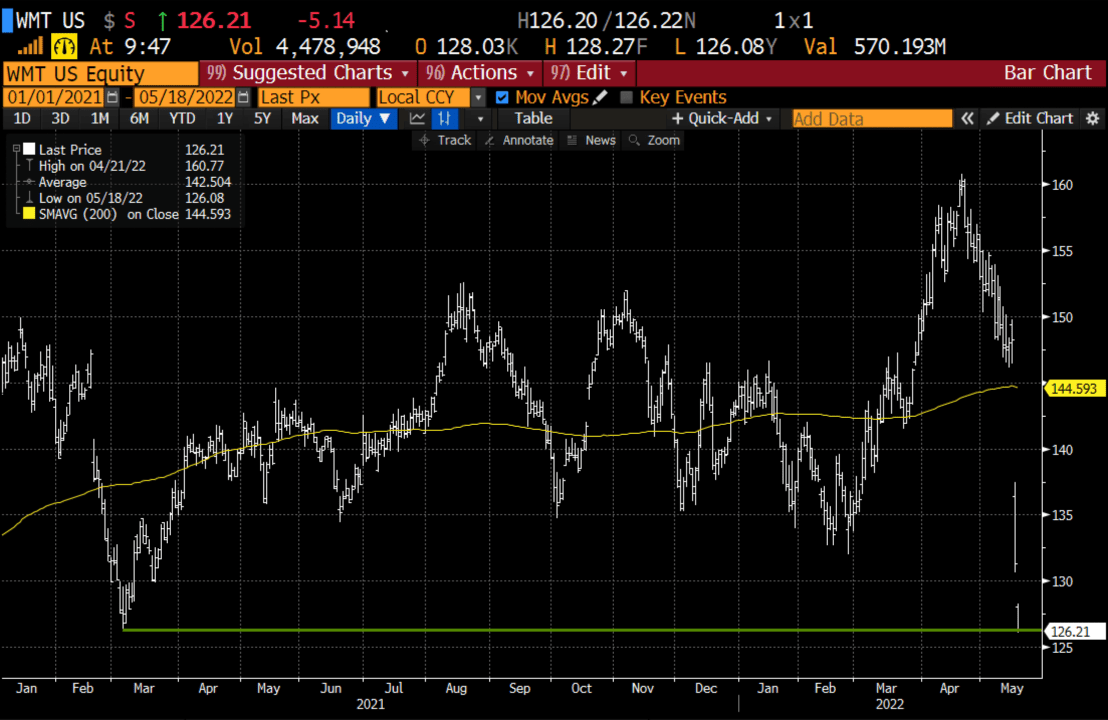 Rationale: this trade idea risks less than 3% of the stock price, has a break-even up 6%, and a max potential gain 4x the premium at risk if the stock is up ~15% in two months.

Trade Idea #2: Shares of RIVN, the electric car maker that has yet to ship many cars, that went public late last year is down 73% on the year, down 65% from its IPO price of $78 and down 85% from its post-IPO high of $179. The knock on the stock is that it had a valuation out of the gate in the public markets that would take them a decade to grow into and at the pace at which they are expected to ship cars, and the money they are expected to lose as they ramp up will continue to compress the valuation. But the sentiment is really bad, and short interest is very high, and after last week’s lockup, the stock could have a bit of a short squeeze if investors believe that the pendulum shifted too far to the other side.

The company has a very good-looking balance sheet with $16.4 billion in cash vs only $1.6 billion of debt, and with a market cap now of just under $25 billion, the company’s enterprise value is about $10 billion.

With nearly 30% short interest and a chart that looks like it is just picking its head up from a sustained downtrend, the stock could see a short squeeze on the slightest bit of good fundamental news: 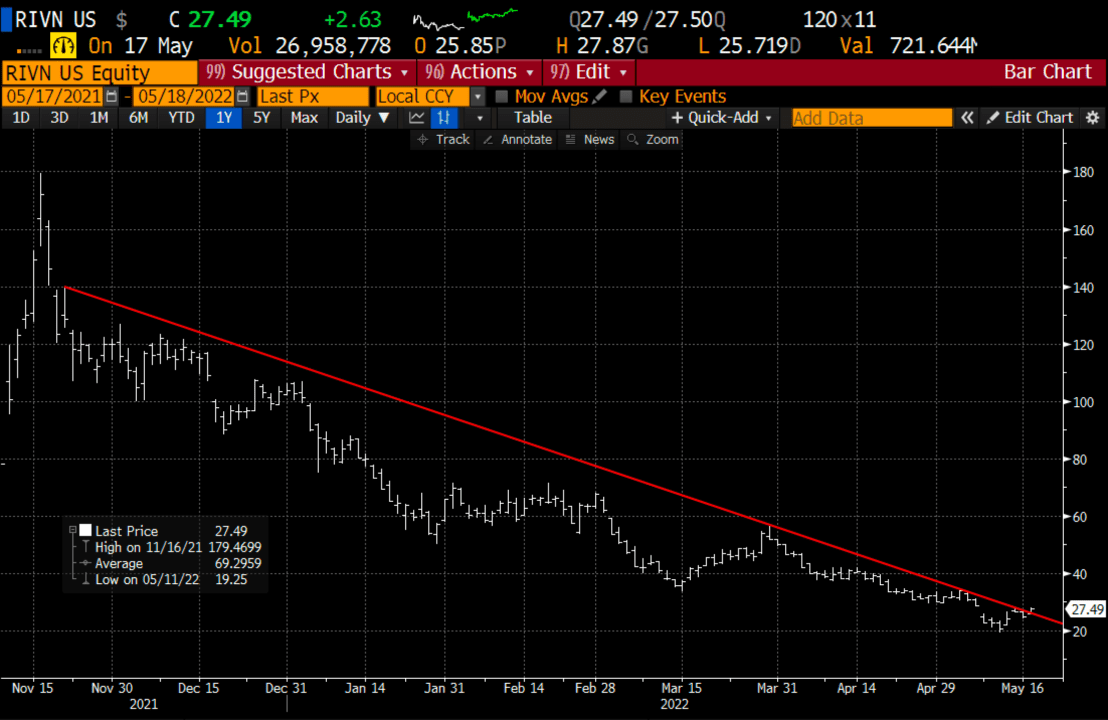 Rationale: this trade idea risks 5.5% of the stock price, and has a break-even up about 15% with a max potential gain of 30% of the stock price if the stock is up 45% in a month. This is clearly a speculative trade idea, one where you would be risking what you are willing to lose, but I would much rather express a bullish view in options in a stock like RIVN than long the stock if taking a near-term view.

Lookback:  On April 27th when AAPL was $158 I detailed a yield enhancement strategy for long holders of AAPL:

Now with a few weeks past and the stock near $150, after being as low as $139 last week, the short June 180 call is worth about 12 cents, it makes sense to close this short call position.

$150 which was past support is now technical resistance, if the stock gets through there it likely heads back towards its 200-day moving average just below $160, which could represent a good opportunity to once again overwrite shares of AAPL