In The Money with Fidelity Investments: TLT, T, LULU, COIN

Macro: Friday’s June job’s report will be very instructive to the Fed’s likely course of action for the balance of the summer. If we get a third consecutive weak reading, despite some hot readings on inflation, including housing prices, wage growth, and consumer confidence, the Fed will have cover to stick to their dovish message past the late July FOMC meeting and likely into the Kansas City Fed’s annual symposium in Jackson Hole the last week of August. This will be supportive of lower bond yields, with the 10-year possibly retracting back to its 200-day moving average, lending credence to the recent rotation back into growth and out of GDP exposed cyclical and financials which had benefited while rates were rising in Q4 2020 and Q1 2021. 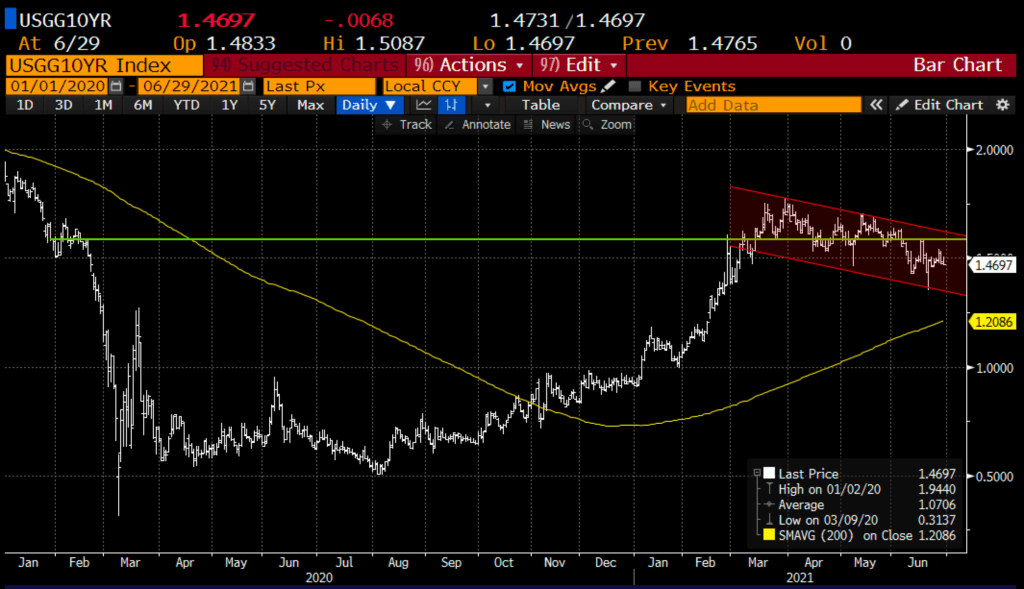 If rates are headed lower over the summer, investors may look to high-yielding stocks like AT&T, which currently sports a 7.2% annual dividend. The company recently announced its intent to spinout its media assets in an effort to pay down debt, reversing a massive buying spree over the last decade that included DirecTV and Time Warner. Initially, investors liked the idea, and the stock traded as high as $34 before it reversed and has barely seen an uptick in a month. $27.50 looks like decent near-term support, but I am not sure I would want to be long the stock below, which leads me to define my risk with calls or call spreads to play for a bounce-back for gap fill to $32. 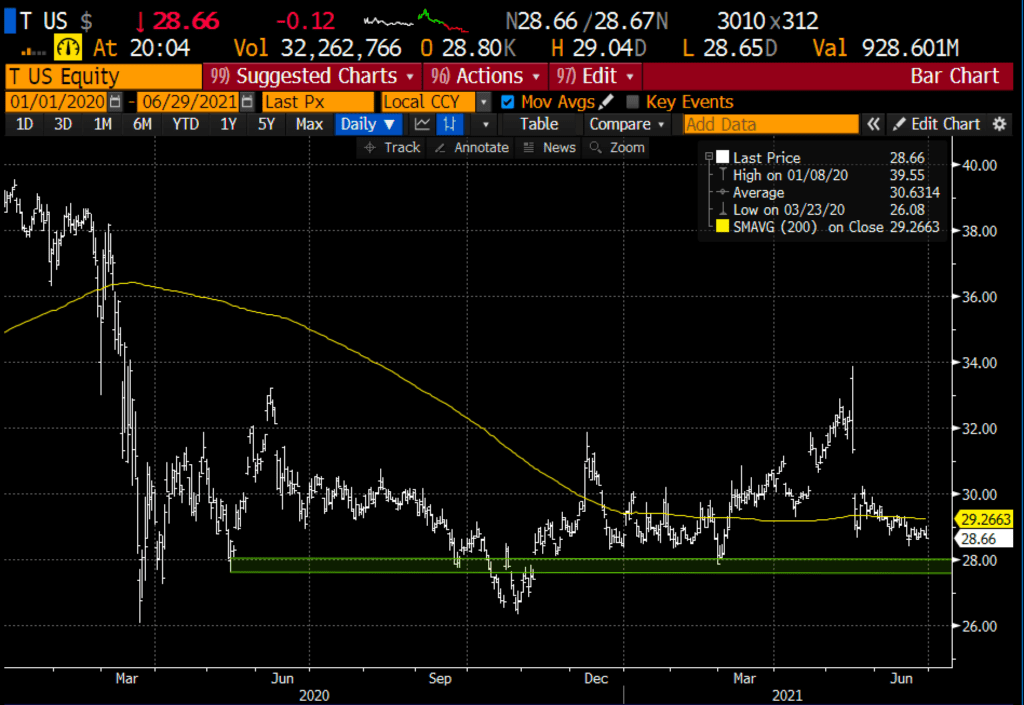 Last week shares of Nike (NKE) rocketed to a new all-time high in one fell swoosh… gapping up 15% on Friday following better than expected earnings and guidance. For those trying to extrapolate to athleisure peer Lululemon (LULU), I might consider taking a mulligan. Many of the trends that NKE’s results benefitted from are not exactly what LULU might be facing as the world reopens.

Shares of LULU trade about 45x next year’s expected 23% eps growth on 17% sales growth which is about 10 turns rich to NKE.

From a technical perspective, the stock is at an important sport, the downtrend from its all-time highs made last summer. 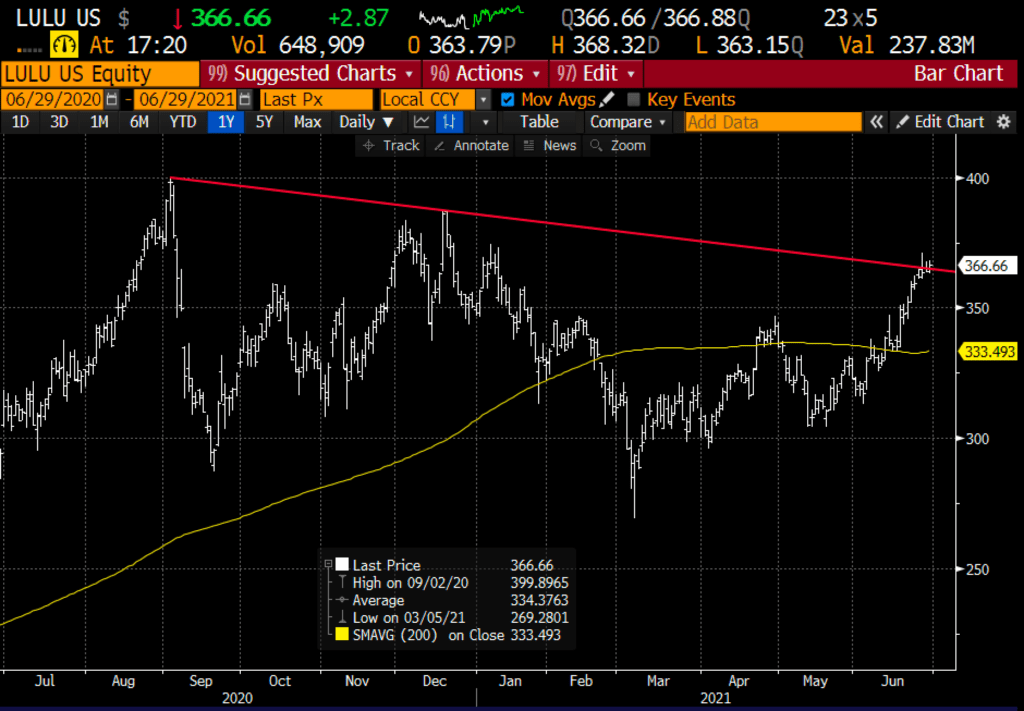 Rationale: this trade idea risks 2.7% of the stock price, breaks even down 4%, and has a max gain of up to 8% of the stock price if it is down 12% in a little less than 2 months. Risking one-quarter the width of the spread and targeting a move back to its 200-day moving average.

Lookback: Last week I detailed a bullish trade idea in COIN as a way to play for a near-term bottom in Bitcoin…

Well, Bitcoin did find some support and rallied 20% from last week’s lows. Shares of COIN have also bounced 20%, and the long call idea from last week has appreciated nicely. With the stock near $250, the now in-the-money call is now worth almost $10.50, it makes sense to take the profit and possibly roll some of the profit up and out playing for further gains. 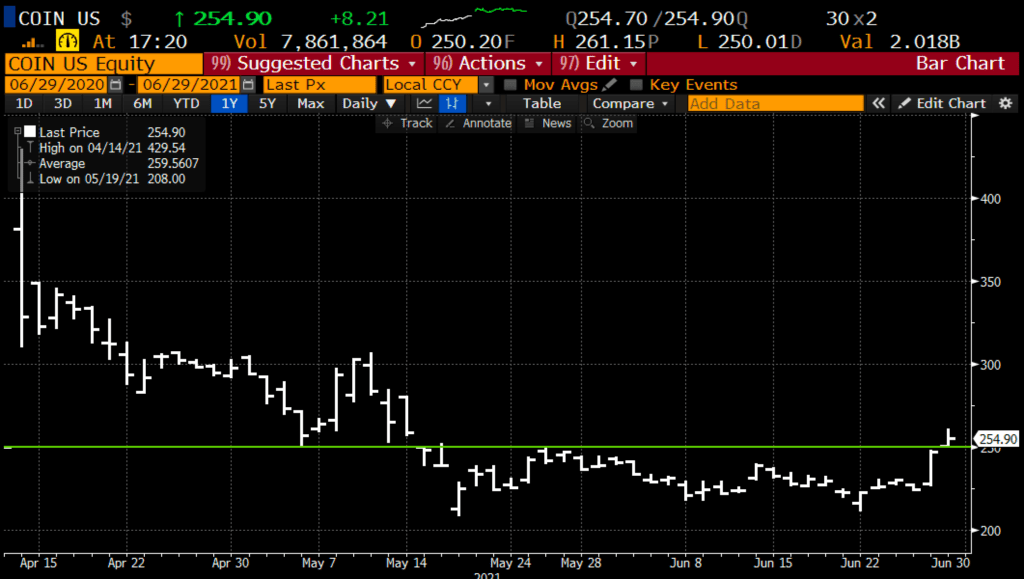