In The Money with Fidelity Investments: TLT, SPY, SPCE, SBUX

Macro: Despite last Friday’s better than expected June jobs report, the stock, bond, and commodities markets all took their cues yesterday from a slightly weaker than expected ISM services number for June, possibly signaling a weaker than expected second-half economic recovery.  For the last couple of months on ITM we have suggested that Treasury Yields are likely a better tell about economic expectations as opposed to the stock market.

The Ten Year U.S. Treasury Yield is approaching key technical support, its uptrend from its all-time lows made in 2020: 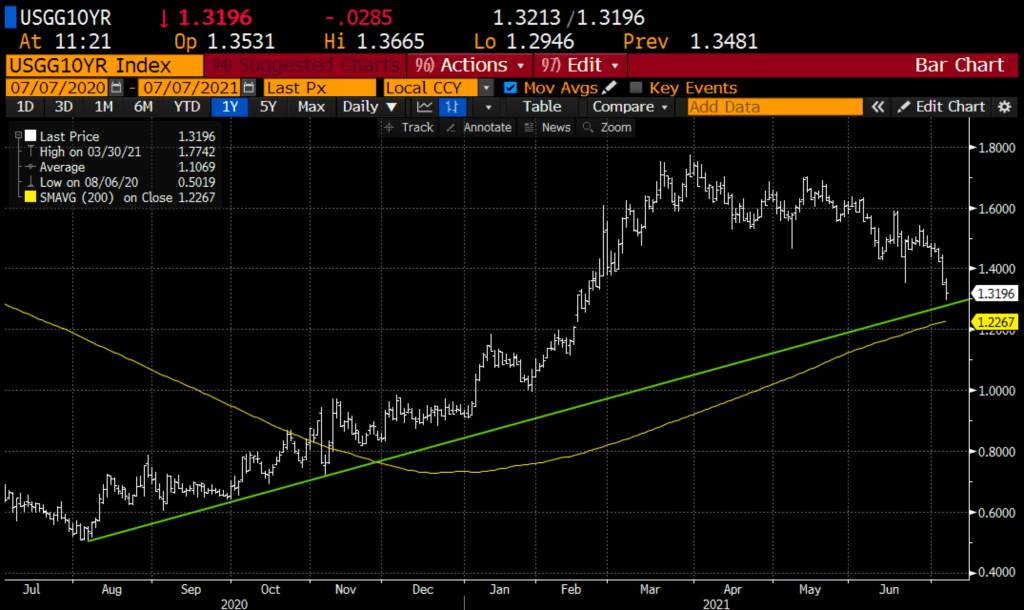 Crude Oil (Brent) has had a heck of a run after its 2020 crash, but despite news out of the OPEC+ meeting this past week that should have been supportive of oil prices, the commodity failed at key long term technical resistance: 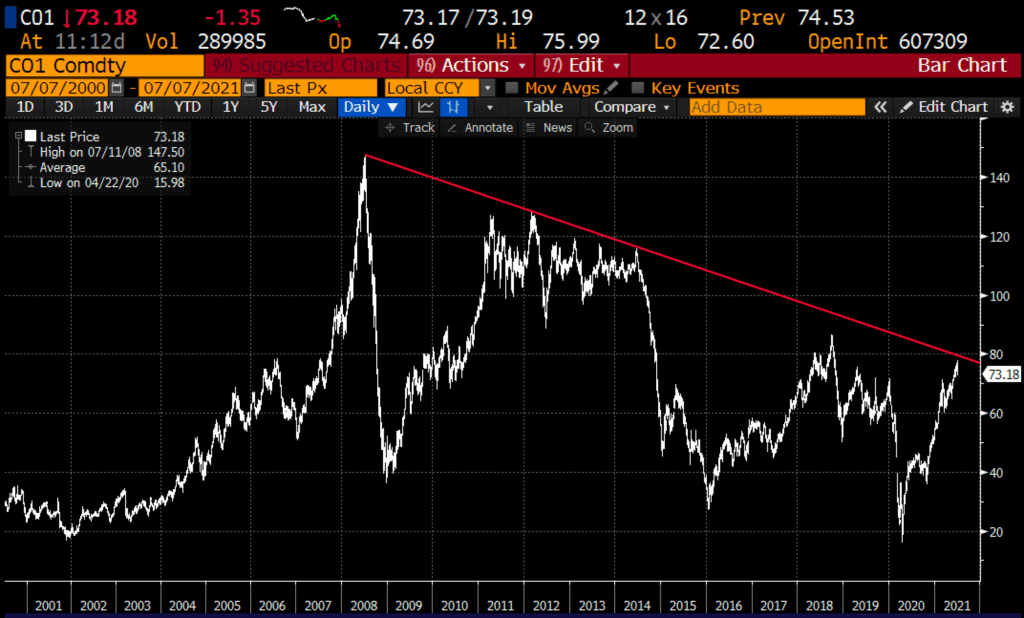 And the stock market (S&P 500-SPX) was barely bothered, down less than 1% from Friday’s all-time high, and interestingly up nearly 11% from the levels it was trading the last time the 10-yr U.S. Treasury Yield was trading at 1.35%.

But Small Cap stocks, the Russell 2000 (RTY), which have not confirmed the multiple new highs in both the SPX and the NDX is now nearly 5% from its recent highs, having gone sideways for months, with its all-time highs very near that of the 10-year U.S. Treasury Yield in March: 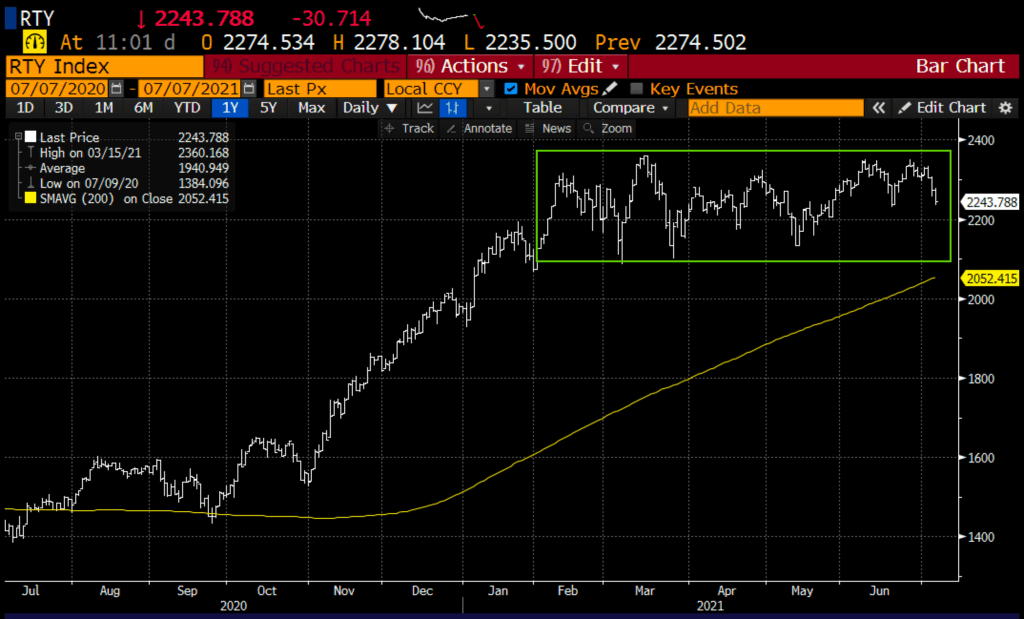 Trade Idea #1: Those very long the stock market might head the warning from the stock market as investors get ready to digest Q2 earnings in the coming weeks and possibly also quantify what slower second-half growth might look like for the U.S. economy, despite slower growth. Options prices remain fairly cheap in index ETFs like the SPY, which tracks the SPX, with 30-day at the money implied volatility in the SPY at just 11.5% suggesting less than 1% daily moves.

Options are cheap, the index is expensive, expectations and complacency are high despite warning bells screaming in silence. Target a break of the uptrend from the late March low that also coincides with the SPY’s 200 day moving average: 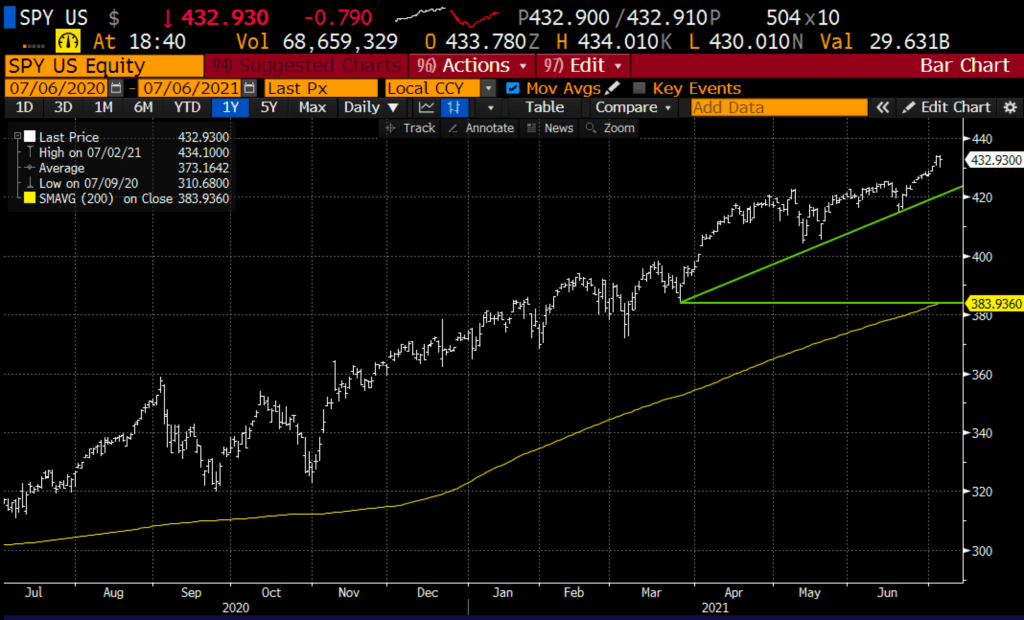 Rationale: this trade idea risks a little more than 1% of the etf price, has a break-even down less than 2%, and has a max potential payout of 8% if the SPY is down 10% in almost a month and a half.

Trade Idea #2: Let’s start to consider hedges for stocks that are up a lot, especially prior to events… like earnings or other highly anticipated goings on… like maybe a space flight… yep you heard me right, it’s 2021 and billionaires are going to Space in rockets that their companies constructed. Next week Richard Branson, the founder of Virgin Galactic (SPCE) will be on board for the companies first flight into space, not outer space, just somewhere up there where the passengers will have a little zero gravity action. I don’t mean to sound skeptical, I think this is a very cool company, I can’t speak to the stock’s valuation, sporting a $10.5 billion market cap with no revenues, but first movers in the commercial space race could wind up being the most valuable companies in the world in the near future.

Shares of SPCE have been on a wild ride over the last year, up about 90% on the year, up 220% from its 52 week lows made in May which came after a 76% peak to trough decline from its all-time highs made in February: 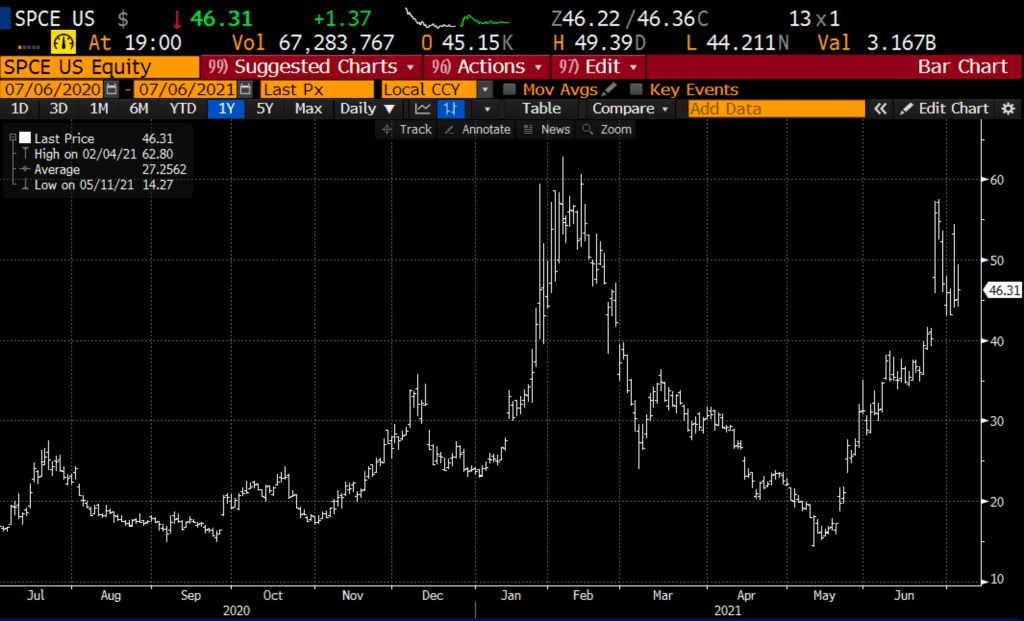 We are all hoping everything goes well on these upcoming manned flights, and the potential for delays due to weather or equipment are always possible, but if I were long, after the recent run the stock has had and the potential risks of disappointment I might consider a collar, a hedging strategy where an owner of a stock will sell 1 out of the money call (vs 100 shares long) and use the premium received to buy an out of the money put. This allows for gains of the stock up the short strike, and losses of the stock capped to the strike of the long put strike.

IN the example I am going to use below because there is so much demand for calls as opposed to puts, the hedge lines up very well where the potential upside to sell a call vs the downside of buying a put is VERY favorable.

Profits of the stock of up to 16 between 44 and 50 with-profits capped at 60 and the stock called away of above 60 on Aug expiration. The long holder of the stock could always cover the short all to keep the long position intact.

This is not a normal occurrence in the options market.

Lookback:  On June 23rd when SBUX was around $112 I detailed a near-term bearish view with defined risk

With less than two weeks to expiration and the stock near $117, the call spread that cost $1.50 has lost most of its value. Generally, we like to remind viewers to use mental stops when placing long premium options trades as the likelihood of seeking out a profit once the trade idea has lost 50% of its value is very low. With seven trading days to expiration, the break-even on this trade idea is down 5.5% at $110.50. If I were long and had not kept to my mental stop then I might consider letting it ride at this point as I would only get about 20 cents for it if I were to close. 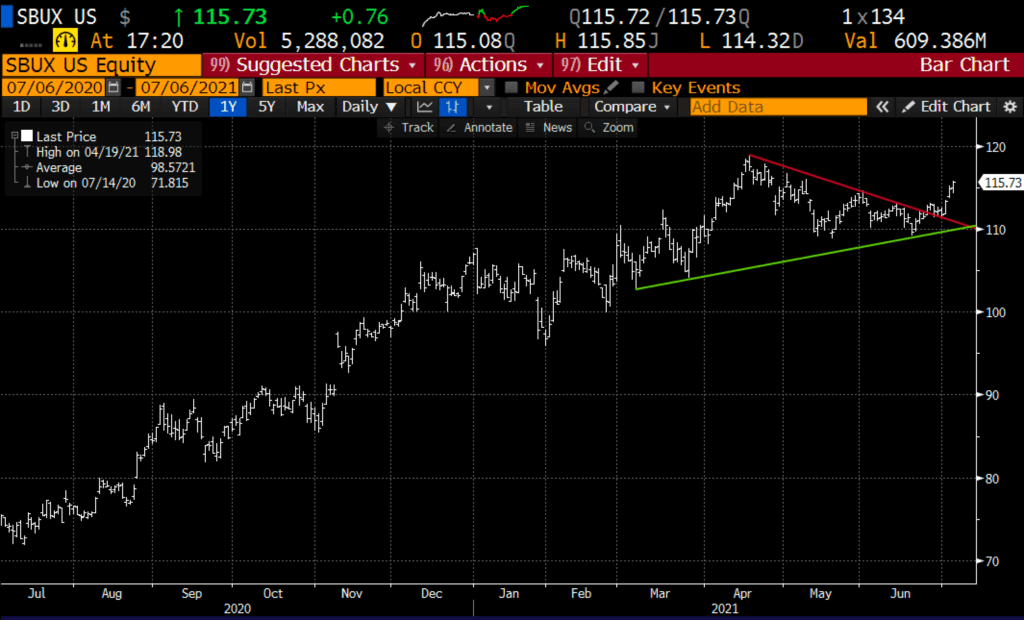