In The Money with Fidelity Investments: SPY, VZ, USO

Macro: Stocks appear to be taking one step forward and two steps back, despite only being down about 4% from last month’s all-time highs in the major averages. A 10-yr U.S. Treasury Yield near 1.6%, up from 1.13% just two months ago, $80 oil and other industrial commodities at or above 52-week highs, the persistence of the delta variant causing all sorts of supply chain bottlenecks, declining growth expectations for Q3 and Q4, and generally high stock market valuations as we head into Q3 earnings season is causing investors to hit the pause button.

The S&P 500 (SPX) feels vulnerable near-term back towards its 200-day moving average which would mark nearly a 10% peak to trough decline, and might prove to be a healthy pullback for those who expect lost growth this year to be made up next… 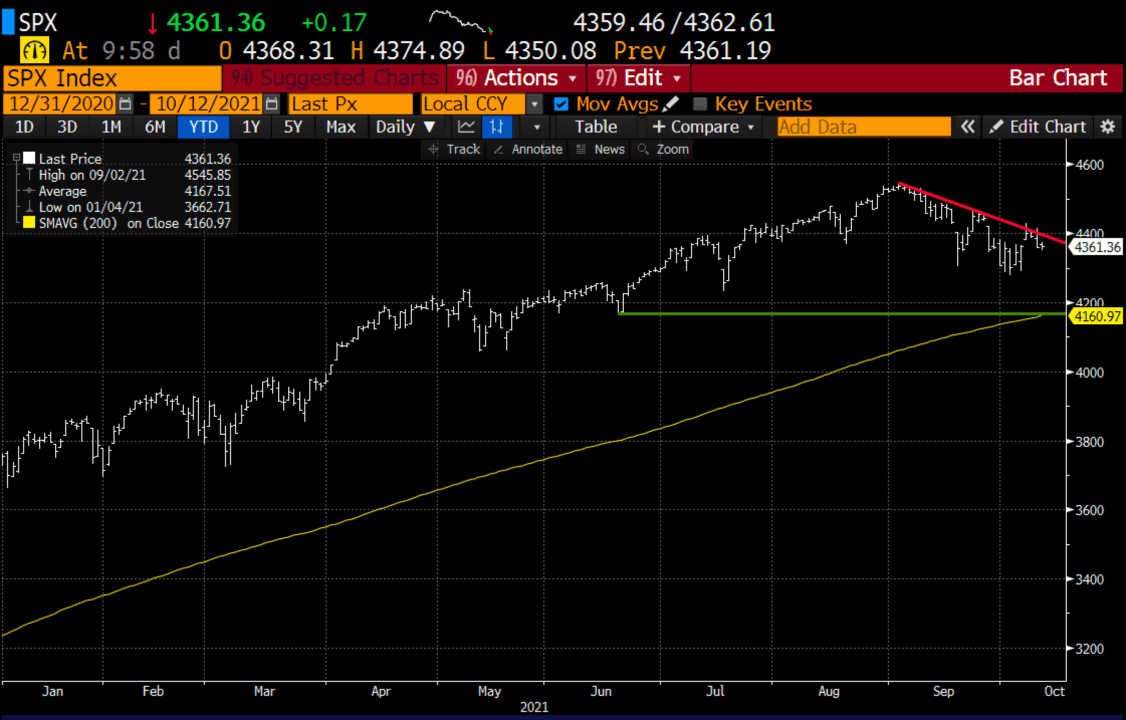 VZ is down 13% on the year, trading at a new 52-week low down nearly 7% in just the last week. What is fascinating is that there is NO specific fundamental news, while the rise in interest rates make high-yielding stocks like VZ look less attractive, the one-week plunge is not likely in response to the 10-year U.S. Treasury yield at 1.6%

Is it just a technical break? Maybe but it is worth noting that AT&T has dropped 10% in the last week making new multi-year lows. The stock’s 5% dividend yield could start to make it attractive after its sharp decline, especially if the rise in rates were to moderate a bit. 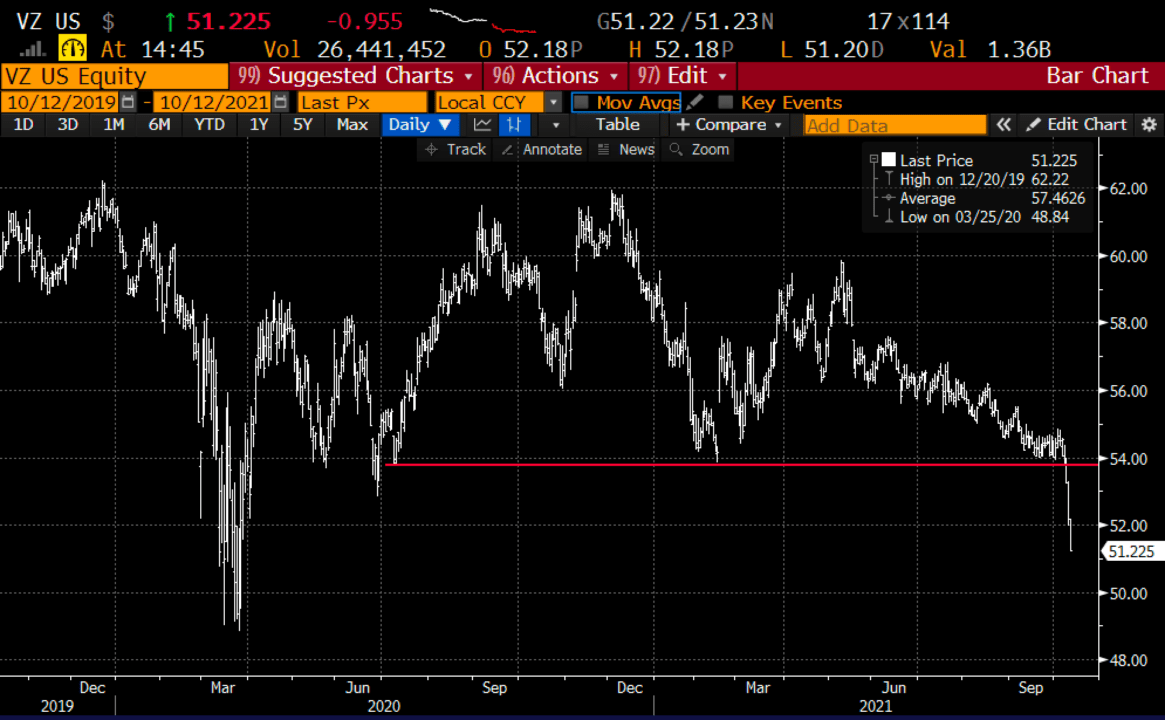 Rationale: this trade idea risks 2% of the stock price, has a break-even up 4.3%, and has more than two months to play out. an attractive risk-reward in my opinion given the recent sharp decline.

Trade Idea #2 One of the causes for the volatility discussed above is higher oil prices. There is talk in the Biden Administration that they may tao the Strategic Petroleum Reserve to elevate those prices pressures a bit of OPEC+ want to drill more and increase supply. Much like in July when the cries for $100 oil were last loudest, it appears that something is likely to give sooner than later. This past summer from a 52-week high crude, or in this case USO, the ETF that tracks WTI crude sold off nearly 15% as demand appeared to wane due to economic slowness due to delta variant. Since the Aug lows, the USO has rallied nearly 30%, I suspect the slightest bit of news on the production front of weak economic front and USO headed back its breakout level near $51: 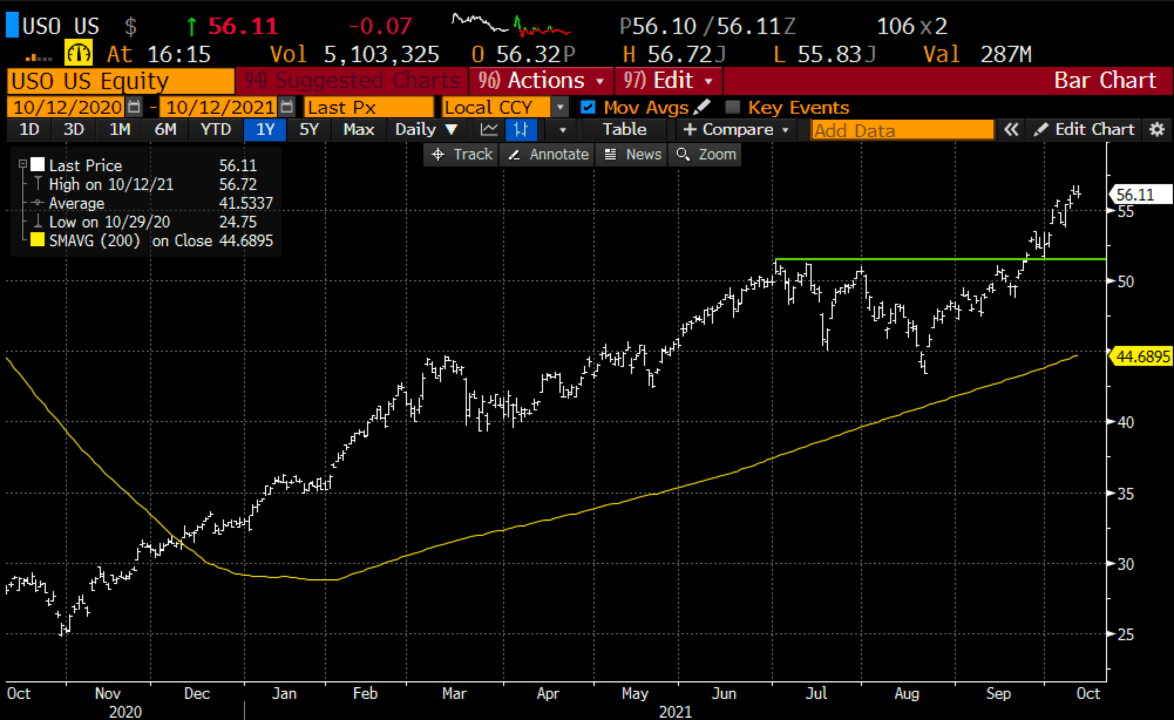 Rationale: this trade idea risks less than 3% of the ETF price has a breakeven down 3.5% and can profit up to 6.5% if the etf is down ~10% in a month. risk one to possibly make three.

Lookback – On Sept 7th I detailed a bearish trade idea in the SPY:

Now with the SPY $433 the put spread that cost $6 is now worth $16 with a few days left to expiration, this trade needs to be managed prior to Friday’s close. The Short 400 put is nearly worthless and you might think of buying it to close for 5 cents and then think about when to take profits in the long 450 put that is well into the money at this point. It really is a market call, how low you think the market can go over the next few days.