In The Money with Fidelity Investments: SPX, XLK, FXI, MCD

Macro: I am focused on two phrases, “as good as it gets…?” and “how low can it go?” The first might encapsulate the environment for stocks, as many companies that faced easy comparisons in Q2 from the prior year are likely to face tougher comps in the back half of the year, as investors contemplate just how low can yields go? The Fed at their meeting today will likely reiterate that they see upward pricing pressures as “transient” but they do recognize the risks to sustained higher prices for growth at a time when the delta variant is running rampant in parts of our country and the world with low vaccinations rates which could lead to non-linear recoveries. The longer we are dealing with the virus the greater the potential that the V recovery we have experienced due to unprecedented levels of monetary and fiscal stimulus could lead to a W aka a double-dip recession. Let’s see how super-cap tech stocks trade after results that were great but also expected to be so, thus the massive runs in the stocks over the last couple of weeks.

The S&P 500 (SPX) is getting extended, it has been more than 180 days without a 5% dip, the 50-day moving average has been support this year, but the rally’s breadth is not healthy, and let’s not forget the sharp decline last Sept when complacency was at its highs: 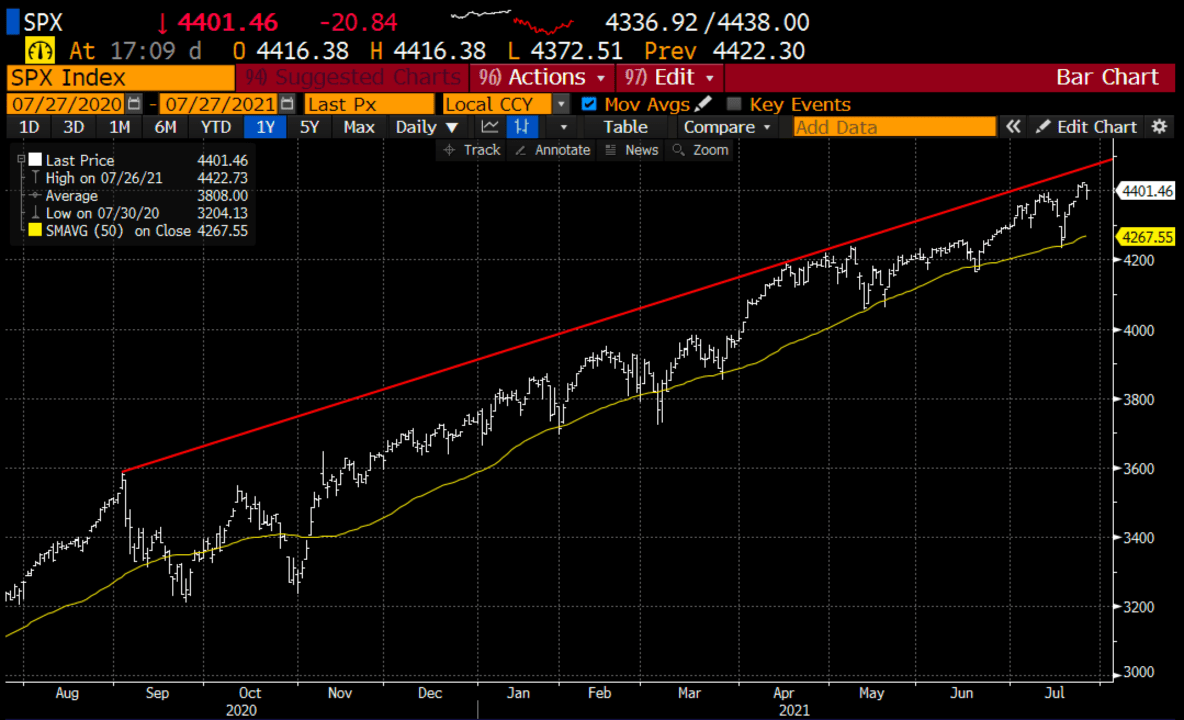 Trade Idea #1: “As good as it gets” let’s look a the XLK, the Technology Select ETF where 50% of the weight are AAPL, MSFT, and NVDA or about $5 trillion in market cap. What’s most interesting about this ETF is that AAPL, the largest stock on the planet actually massively underperforms the broad market, up about 10% YTD vs the SPX up 17% and the XLK up 19%. Second half comps get more difficult and the company trades 28x expected F22 eps that is only expected to grow 3% on 3% sales growth. XLK is a good way to play for a possible re-rating of mega-cap tech.

Rationale: this trade idea breaks even down 4.25%, risks 2% of the ETF price, on a move towards the strike I might look to spread the long put by selling a lower strike call in Sept expiration, reducing my premium at risk and lowering the break-even while also reducing the max profit potential. 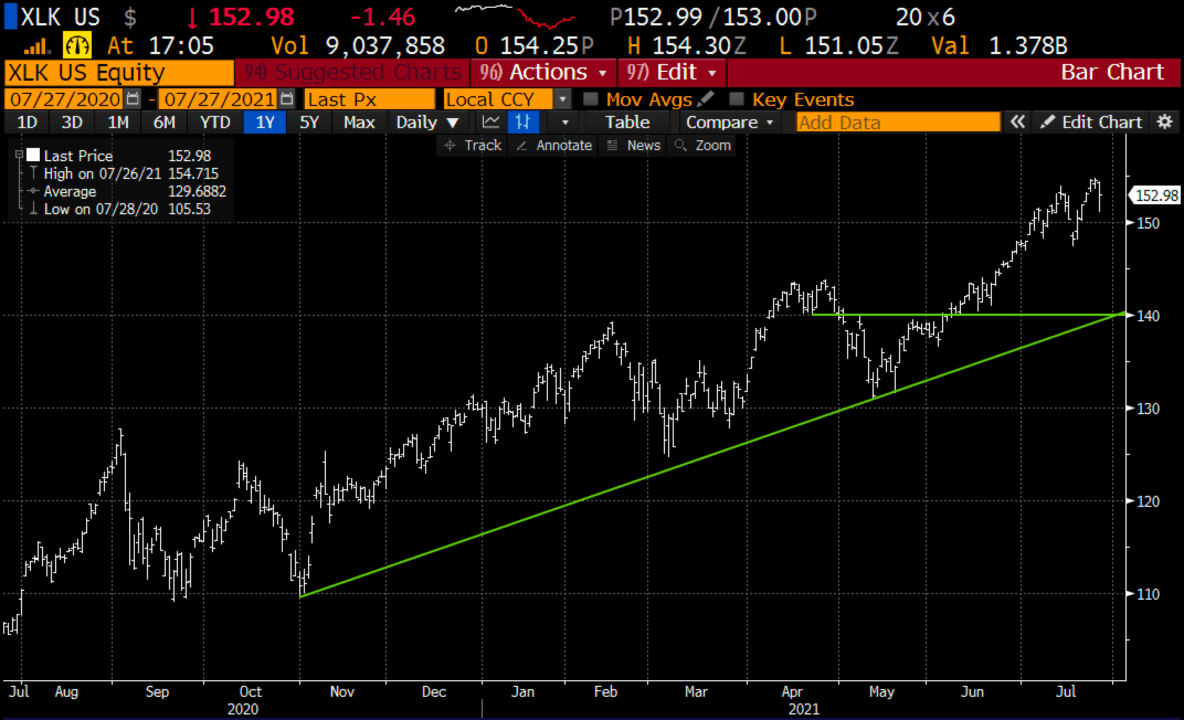 Trade Idea #2: How low can it go? The Chinese are in the midst of an aggressive campaign to reign in what many call their “tech champions” through aggressive regulatory action, specifically aimed at their internet-based companies. The FXI, the iShares China Large-cap ETF, which like the XLK has a large weighting among its top 3 holdings, Alibaba (BABA), Tencent, and Meituan, equalling about 25%. FXI is down nearly 17% this month alone as the rhetoric has reached a fever pitch, which I suspect will abate soon and the FXI will bounce… for those looking to play for a bounce I might target $45 in the coming months. 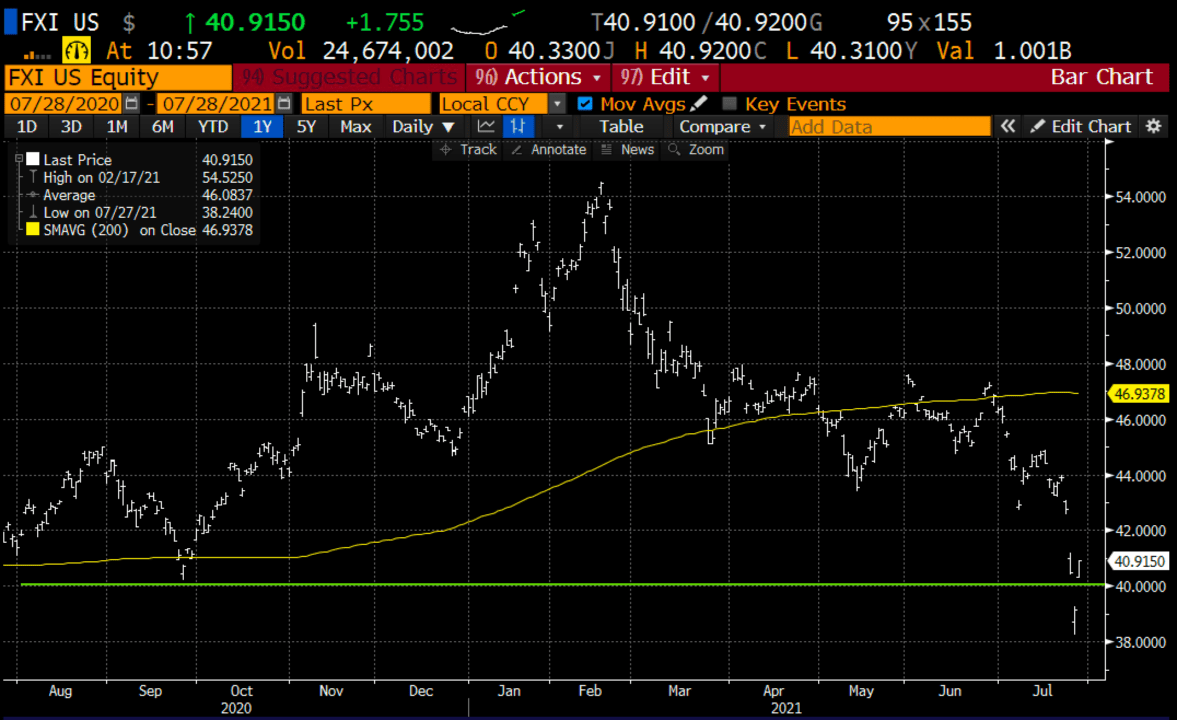 Rationale, this trade idea risks 4% of the stock price and breaks-even up 4% on a move towards the strike I might look to spread the long call by selling a higher strike call in Sept expiration, reducing my premium at risk and lowering the break-even while also reducing the max profit potential.

Lookback: Last week I detailed a bullish trade idea in MCD into their earnings report:

Well, earnings were this morning and the stock is trading just above $240 and the spread is worth ~$3.50 now and it really is a market call, the stock broke out ahead of earnings, if you think today’s price action is just a little digestion and the stock moves in the coming weeks towards $250 then you stick with it. But if you think the stock market corrects post earnings and MCD is ripe to fall back in the range it had been prior to last week then take the profit and move on…