In The Money with Fidelity Investments: SPX, RBLX, XLV, UUP

Macro: What’s different this time? Why can’t the Fed save the stock market? They kept rates and stimulus too easy for too long. They have painted themselves into a bit of a corner, raise too quickly and put the economy into a recession possibly with persistent inflation, which they have no real playbook for, especially when it comes to asset prices. But their dual mandate is stable prices and full unemployment…prices are anything but stable and unemployment feels like it is about to raise off of near pre-pandemic lows, which themselves were decades-long lows, into a weakening economy.

Investors in the stock market seemed to be a bit turned around. They have been selling the “pandemic winners” for months with many down 50-60-70-80% but until recently it has been the major large-cap indices that haven’t budged.

With the S&P 500 (SPX) down about 16% on the year and the Nasdaq 100 (NDX) down about 24%, it will be hard for the Fed to jawbone equity prices higher as they need to maintain any shred of credibility in their attempt to tamp down inflation.  Its been my view that stagflation, where prices stay elevated but higher rates slow the economy will be a bad setup for stocks and both the SPX and the Nasdaq could be vulnerable this year to pull back into a range near their pre-pandemic highs, for the SPX ~3450 and the NDX near 10,500, which would represent nearly 30% and 40% peak to trough declines respectively. Not saying it’s going to happen, but The Fed has few tools right now to stop the decline if the economic backdrop weakens. 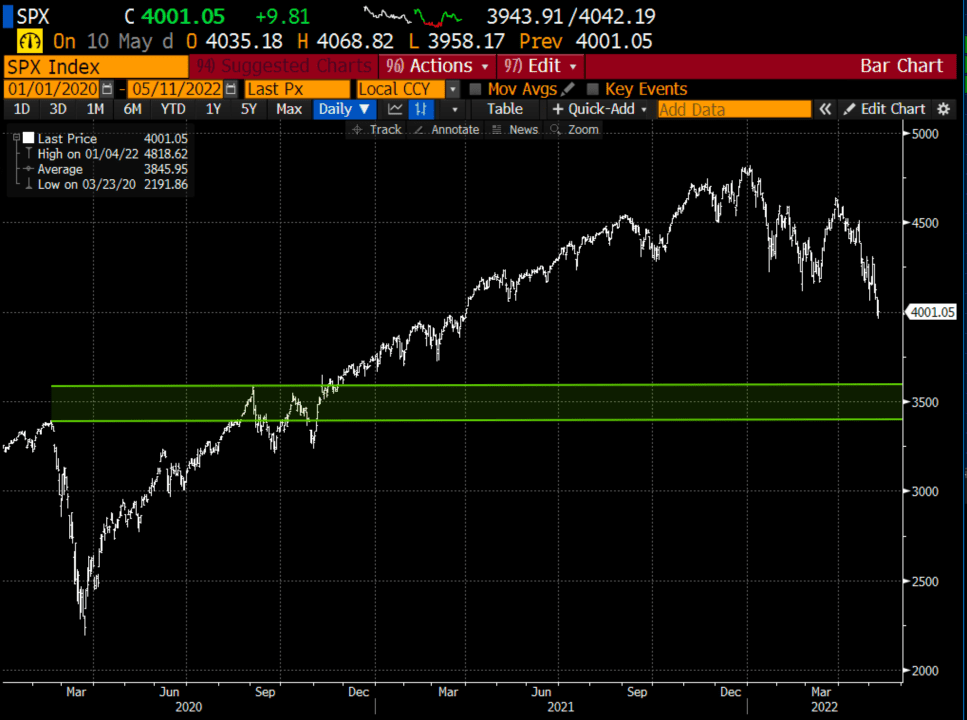 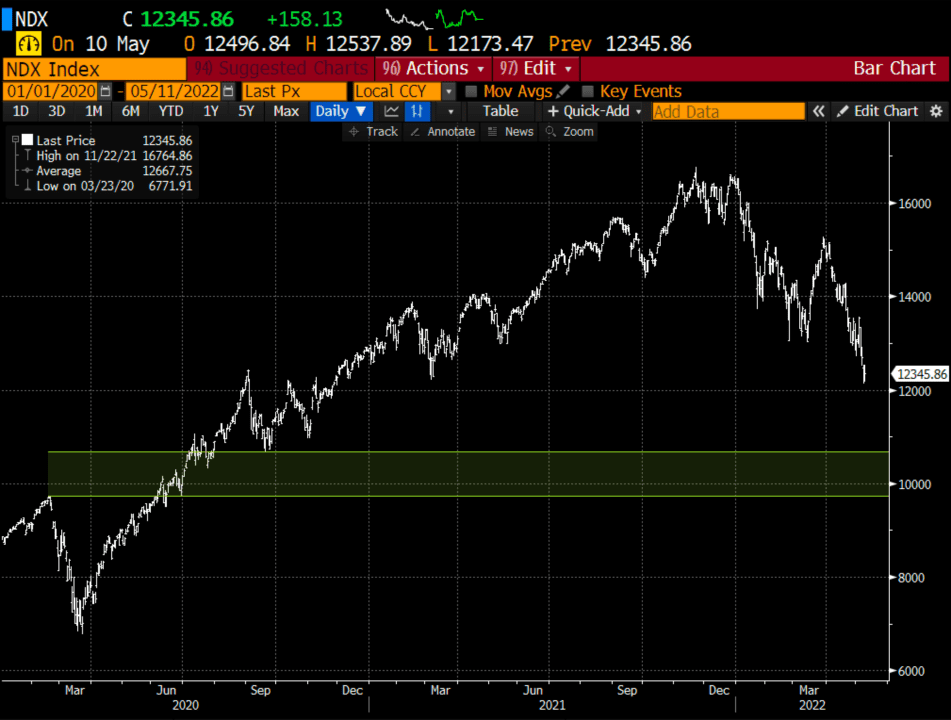 This was a trade idea that I wrote up Tuesday night following RBLX’s earnings when the stock was trading down a little near $22 in the aftermarket and options prices were as of a $23.20 close. When I went to record the video for Fidelity Wednesday morning the stock was up 15% from its pre-open lows and I scrapped the idea, but this is a name I want to keep on my radar.

Trade Idea #1: RBLX, a metaverse. The stock is down 77.5% on the year, down about 85% from its all-time highs last year. On Tuesday the company issued a revenue miss and suggested usage on their platform continues to slow. The stock is down just a tad post the results which are a win in a market where stocks that miss can go down an awful lot in one fell swoop. The stock has a $12B enterprise value with nearly 35% of its market cap in cash. This is a unique asset and could find itself as a takeover candidate for larger media platforms looking for ways to offer customers access to a metaverse.

Rationale, this trade idea has a break-even up 20%, but where the stock was trading on Monday. and the mad gain at $40 was where it was trading a few weeks ago. 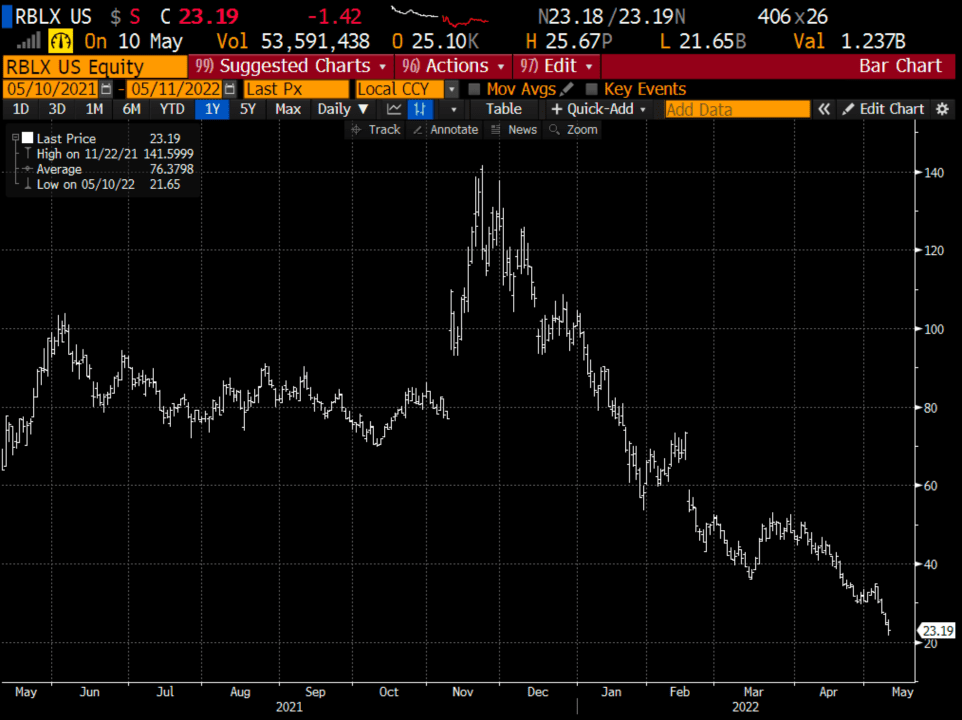 Trade Idea #2: Healthcare stocks offer a level of defensiveness, at a reasonable value at an attractive technical level. A quarter of the weight of the XLV, the Healthcare Select etf is UNH, JNJ, and PFE, three stocks that have very attractive valuations and fundamental catalysts, In the recent broad market sell-off the XLV was not immune but might be setting up for a bounce off of 1yr support with a target move back towards its 200 day moving average near $134. 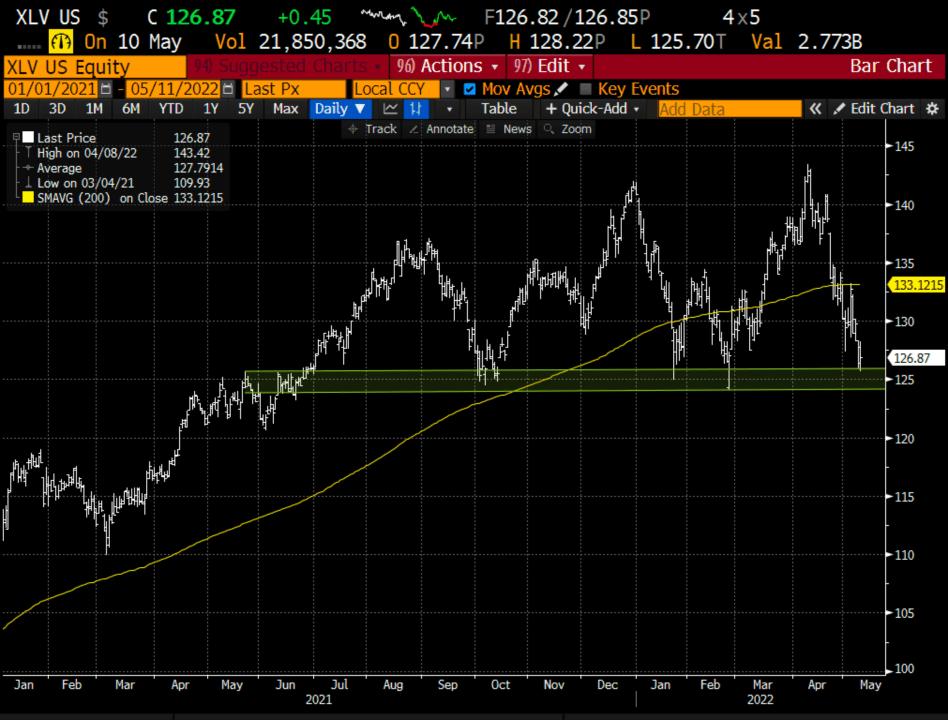 Rationale, this trade idea risks about 2% of the etf price and has a break-even up 4%, and offers a potential 3 to 1 payout if the etf is 140 or higher up ~8% on June expiration.

Lookback: Last week I detailed a bullish trade idea in the UUP, the etf that tracks the U.S. Dollar:

With the UUP a little higher the call is worth about the same as it was last week. I now want to exit this trade as I feel that near-term interest rates might have topped out and the U.S. dollar could pull back if inflation expectations were to moderate. Close at 57 cents.