Macro: The early action in both the bond and stock markets this year feels very similar to that of last year’s action with bond yields moving higher and highly valued growth stocks getting hit very hard. Equity investors have become very accustomed to easy monetary policy and now with inflation running very hot and the Fed finally focused on taking efforts to fight it, higher rates are causing investors to reconsider high valuations where it is clear growth is decelerating.

The S&P 500 (SPX), despite the concentration growing in a handful of names, with APPLE (AAPL) topping $3 trillion in market cap and nearing 7% of the weight of the index is not particularly bothered by the bludgeoning of high growth stocks. But a pullback to the uptrend, also the breakout level from late Oct is coming to a theater near you if rates rally too far too fast. 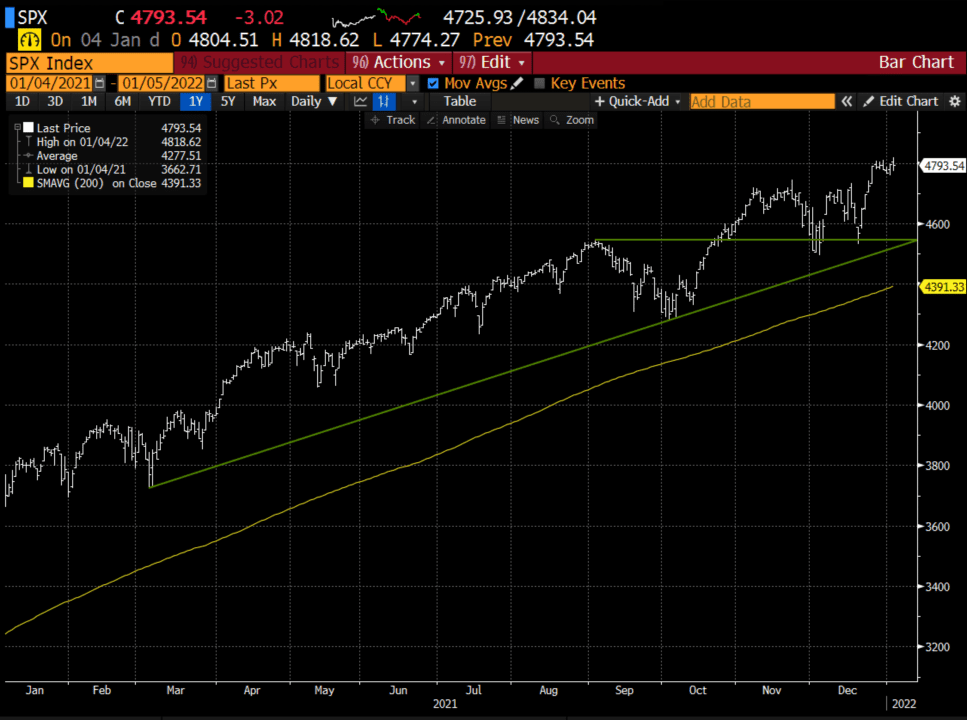 But despite heavy concentration in the Nasdaq 100 (NDX) by the same names, the weakness in dozens of stocks, has hindered the NDX from confirming the new highs in the SPX over the last month. 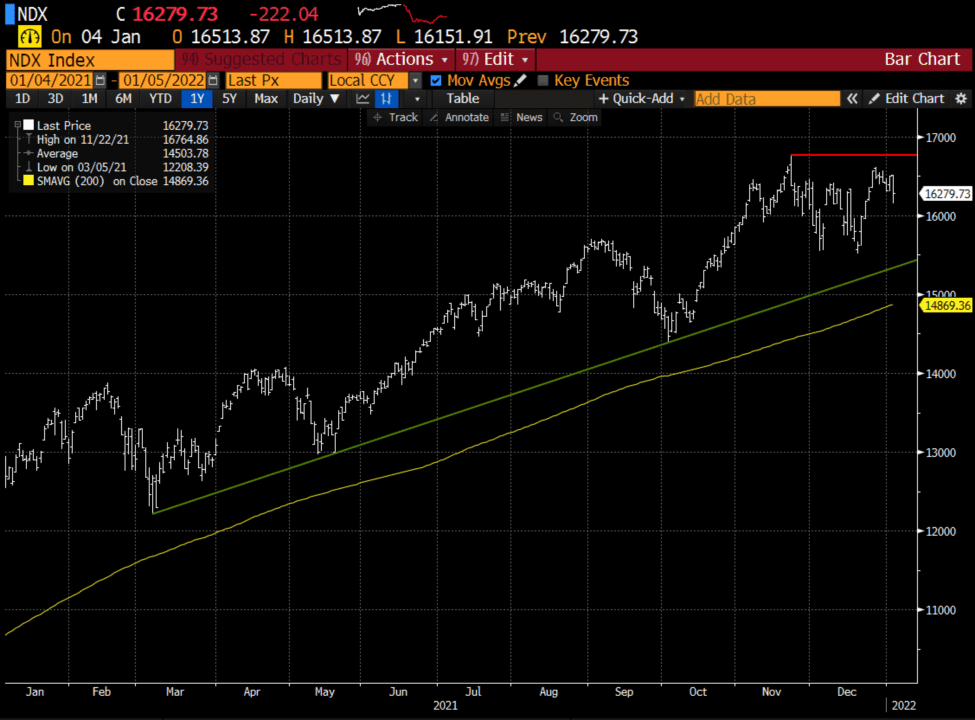 Trade Idea #1: The first trade idea of 2021 was a bullish one in the shares of Ford (F) when the stock was near $9. Then again in late August when the stock was $13. Well, the stock is up already 17% on the year on excitement about their ambitions in Electric Vehicles, which on both occasions last year was one of the main reasons why I was bullish on the stock. Well, the stock was up 130% last year, beating GM’s 40% gains and even Tesla’s 50% gains, Investors are excited about the CEO’s plans to increase production plans for the second time in a few months their fully electric F150, the best selling truck in America. I suspect the slightest disappointment when the company reports Q4 results, which we already know deliveries for and the stock pulls back towards $20.

Rationale: this trade idea risks ~4% of the stock price, has a break-even down 4%, and has a max potential gain of ~13% if the stock is down 17% in a month, or about unchanged on the year. 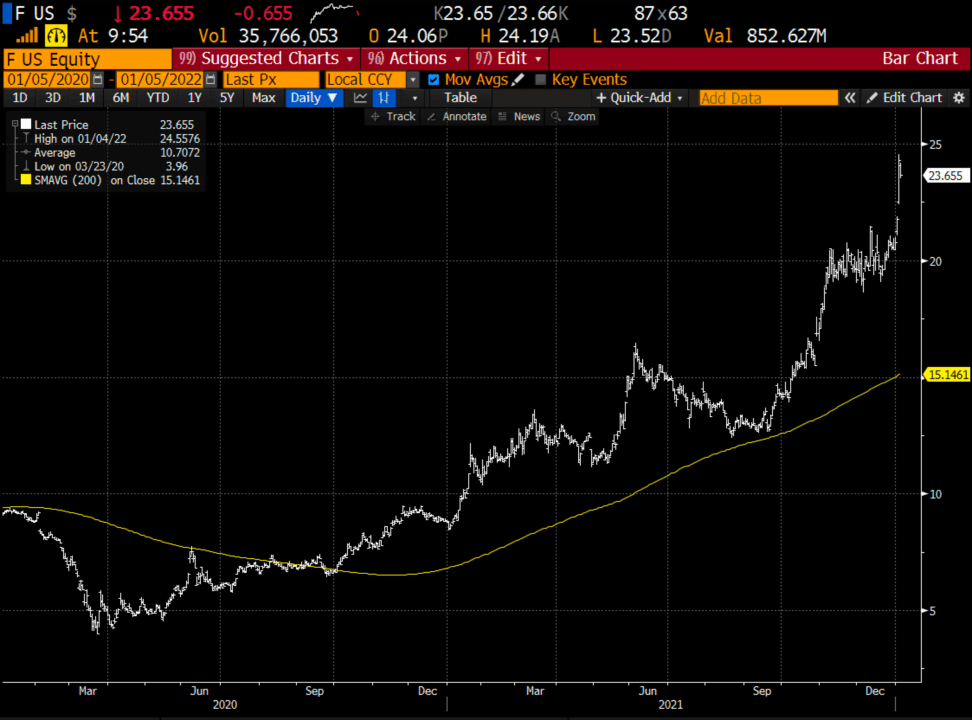 Trade Idea #2: Long SHAK, Shares of Shake Shake have massively underperformed man of its Quickserve peers over the last year in the markets despite expected sales growth of 40% in 2021 and narrower earnings losses, with the expectation of 33% sales growth in 2022, possible a return to profitability on expanding margins. The stock’s performance reflects a good bit of that skepticism, and Wall Street analysts for the most part are on the sidelines with only 8 Buy ratings 12 Holds, and 1 Sell. The chart though could be suggesting the stock is near an inflection point if it can hold the recent lows just below $70 then an upside break above the downtrend could have the stocks re-testing the 200-day moving average near $90 on the slightest bit of good news. 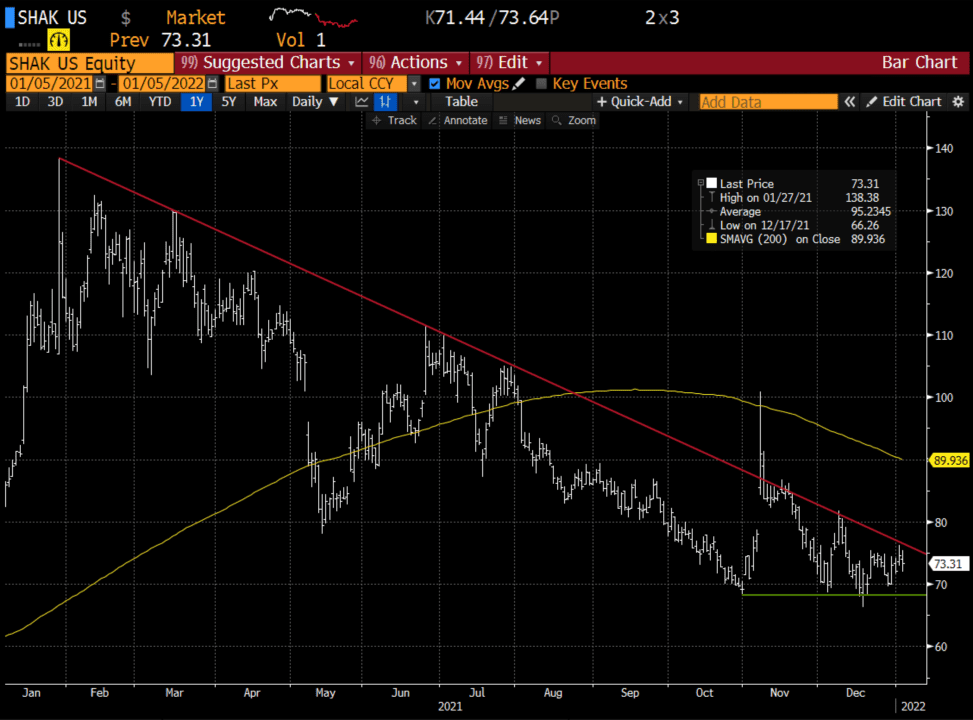 Rationale: this trade idea risks 7% of the stock price, has a breakeven up about 9%, and a max potential gain of 27% if the stock is up 36% in two months.

Lookback – On Dec 22nd I detailed a bullish trade idea in COIN when the stock was very near current levels:

Well, the stock first ripped to 280, briefly places the trade In The Money, but then has come back with the price of most cryptos. The trade idea is worth about $9 with the stock near $245, a small loss, so let’s keep an eye on this one using our mental stop of about 50% of the premium paid. My view has not changed, I still think it should bounce if Crypto bounces which could happen after those with big gains last year are done with profit-taking. A test of that trendline near $235 could be a reason to move your feet and cut losses. 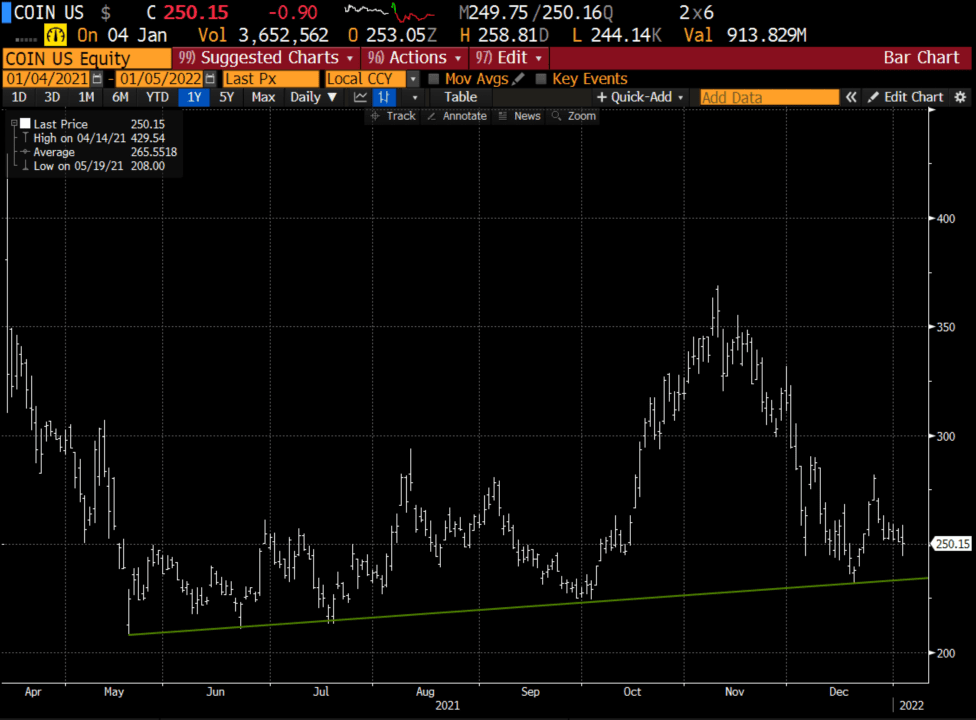 One for the road… I was considering this trade idea in DIDI, but the news last month of their de-listing from the NYSE and the uncertainty about when and how that happens and what that might mean for U.S. shareholders, and the options they have going forward may overpower any fundamental news that might have served as a catalyst with the passing of the latest covid variant which would lead to the end of widespread pre-Olympic mitigation attempts by the Chinese.  I left this in there for those considering doing more work on potential near-term outcomes for DIID:

While some stocks are getting fairly overextended (see Ford above) some others are getting clobbered. One such stock is the Chinese version of Uber and Lyft, which is listed here in the U.S., DIDI. Shares of U.S.-listed Chinese stocks have been under a great deal of pressure from the Chinese regulators as they would prefer they be listed domestically for a whole host of reasons. And additionally, China’s zero-tolerance policy when it comes to Covid has likely caused a slowdown in mobility. But with China hosting the Winter Olympics next month, and companies likely DIDI likely to benefit in certain markets, I suspect shares of DIDI that closed on the dead lows of the year, down from its $14 IPO price in June is poised for a sharp snap-back possibly back to its recent breakdown level near $8: 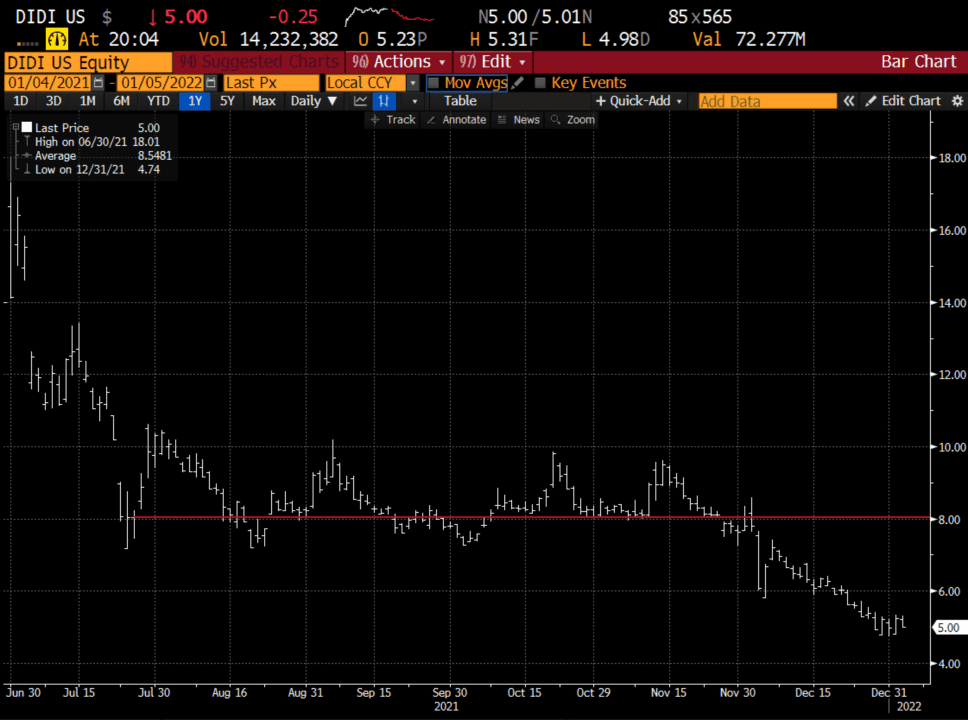 Rationale: this trade needs to be sized appropriately, just because it is a low dollar amount does not mean it’s CHEAP. but if the stock has a reason to really it should be headed back towards the overhead resistance offering the potential to sell a higher strike call to lock in some gains and reduce the premium at risk.