In The Money with Fidelity Investments: SPX, LYV, DIS, MSFT

Here are my notes from today’s show drafted this morning:

Macro: Global growth fears, spurred by fears of a credit contagion emanating from China, plus a continued spread of the C19 Delta variant and fear that the U.S. Federal Reserve may start to taper bond purchases soon caused investors to hit the pause button over the last week. Later today we will get some clarity from Fed Chair Powell at his post-meeting presser as to just how quickly the Fed will look to normalize interest rates, but before the Fed starts to move its feet investors will continue to wrestle with the uncertainty surrounding China’s regulatory crackdown on their “tech champions” and whether or not they will look to shore up Evergrande, the large property developer which has halted making interest payments on their $300 billion in debt.

All of this caused the trend to unfriend the S&P 500. 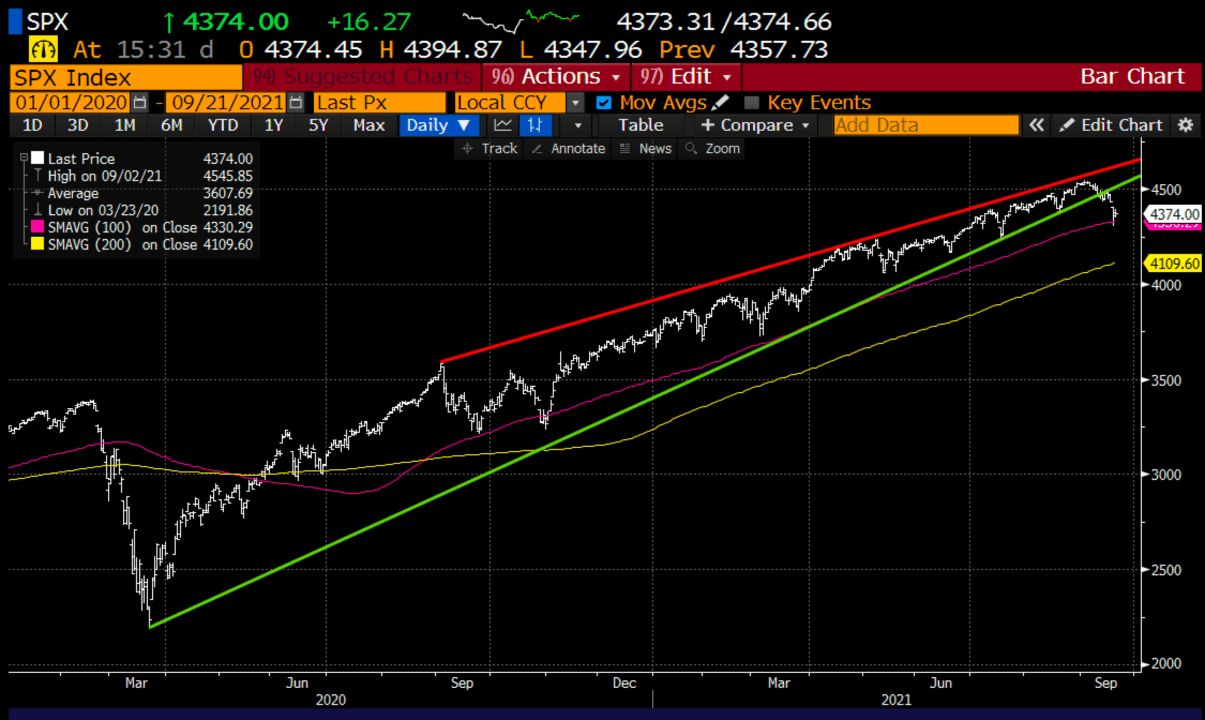 Trade Idea #1: Delta might still be raging, and lots of purchases for experiences might be slightly delayed, but there is one company that got rocked by the pandemic that is only looking forward and through their subsidiaries Ticketmaster and FrontGate Tickets they are racking up the fees for events in the future that will happen, and that’s LiveNation (LYV).

Personally, I can attest that one of my largest discretionary expenditures at the moment is tickets to concerts, festivals, and sporting events.

The company suffered steep earnings losses in 2020 which are continuing throughout this year, as revenues went from a peak of $11.55 billion in 2019 to just $1.8 billion in 2020 but are expected to rebound to a new all-time high of $12.7 billion in 2022 with GAAP eps to go to $1. This makes the stock look expensive after swinging from massive losses to gains, but the stock looks poised to break out of the range it has been in for the better part of the spring and summer as the events business has dealt with fits and starts from the delta variant.

The chart shows a bit of a triangle pattern forming with a series of lower highs and higher lows. If you think the fundamentals are about to inflect, then this stock could be making new highs by year-end. 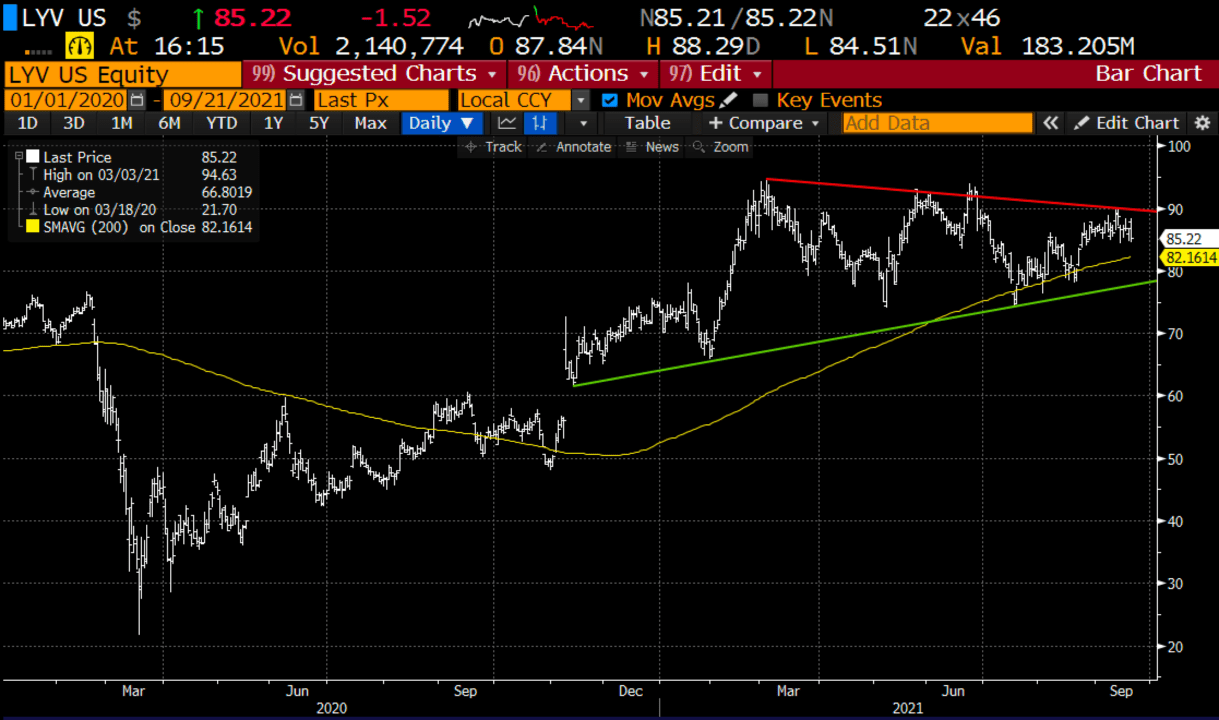 Trade Idea #2: Shares of Disney (DIS) were down 4% yesterday after the company revealed that Q3 and Q4 subscriber growth for their streaming Disney + service would be slower than previously expected.

The stock has been fairly rangebound over the last few months trading between $188 and $168, and now with today’s decline down on the year, and down about 15% from its all-time highs made in March. 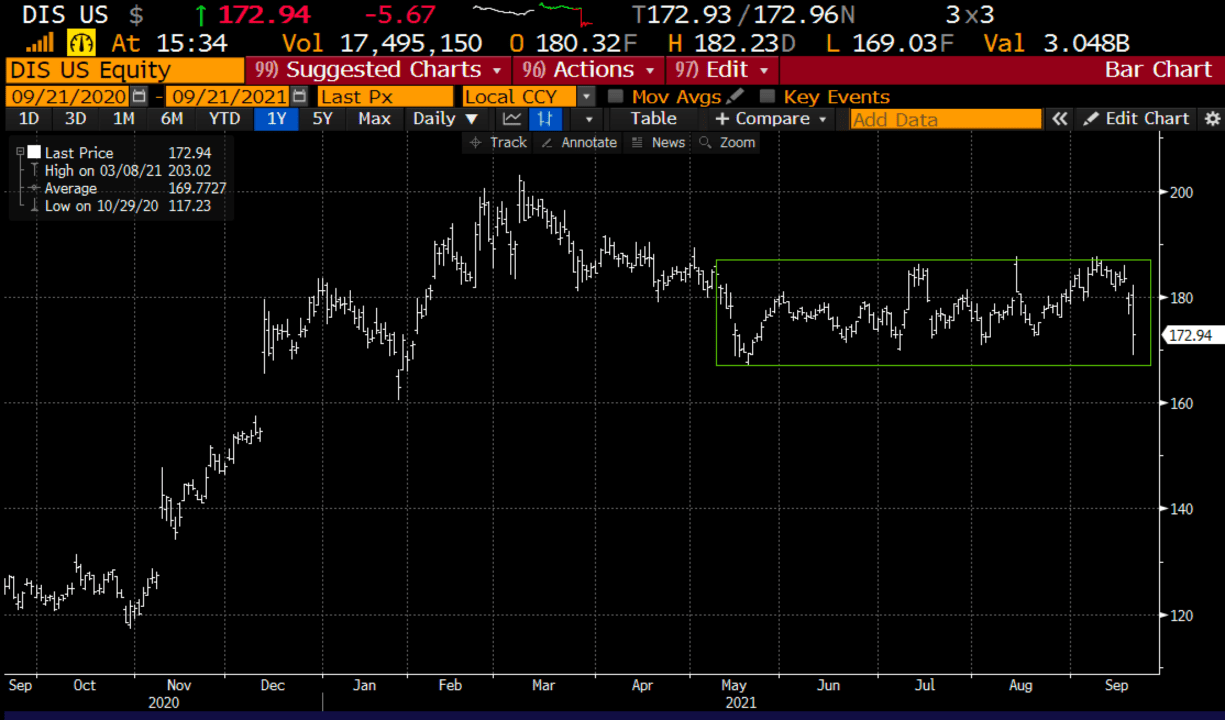 The company is not likely to give a meaningful update to streaming guidance until their fiscal Q4 results in mid-November. Long holders of the stock might consider selling out of the money calls (over-writing their shares) to potentially add yield in what is likely to remain a range-bound stock.

If the stock is 190 or higher on Nov expiration the 100 shares of stock that are long vs the 1 short call would match up and be called away, but the investor could always cover the short call and keep the long position intact.

The 2.10 in premium will serve as a small buffer to the downside.

Lookback – On Aug 31st I detailed a near-term bearish trade idea in shares of MSFT: 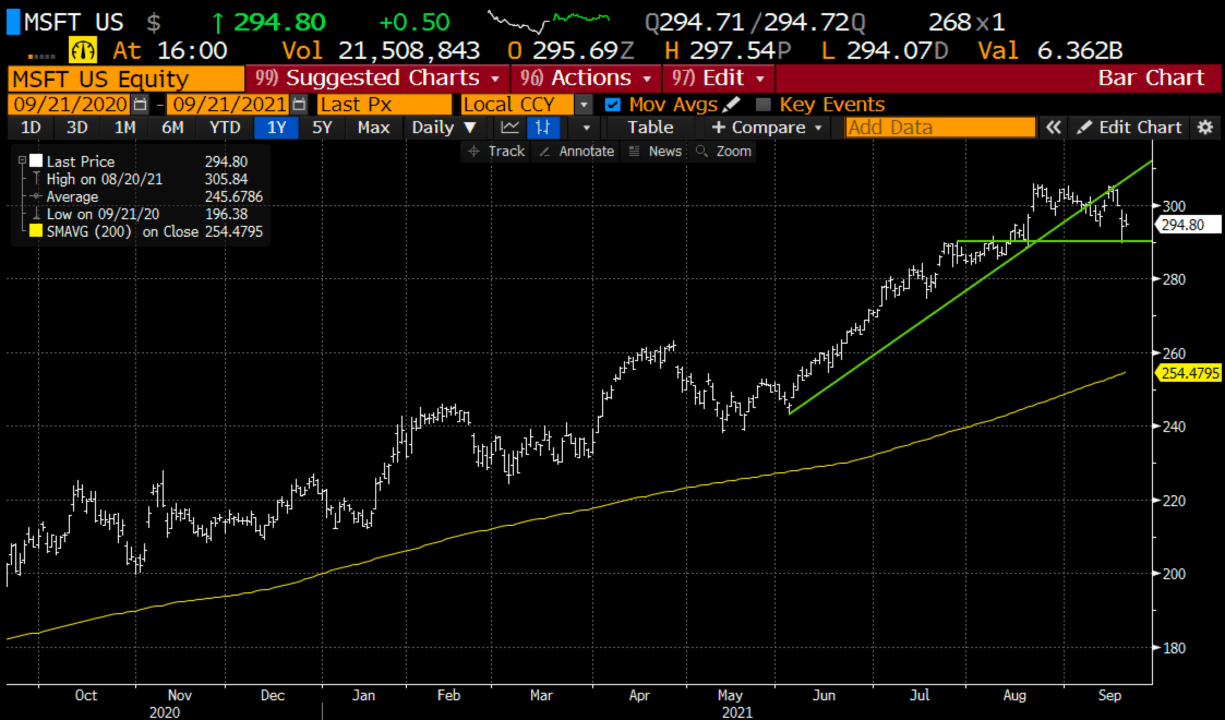