In The Money with Fidelity Investments: SPX, KR, F, XLE

Macro: Stocks at all-time highs, investors have Delta in the rearview mirror, but have likely given the Fed cover to push out Taper of their monthly bond purchases, which is why the 10-year U.S. Treasury yield is still below 1.3%, which is good for stocks. So everything is good for stocks. If another variant comes along, then-Fed cancels taper talk and does more QE. Rates go lower. Good for Stocks! Wake me up when September ends… I remember last Sept, there were also high levels of confidence in stocks and in complacency, the stock market sold off 10% from a then all-time high. 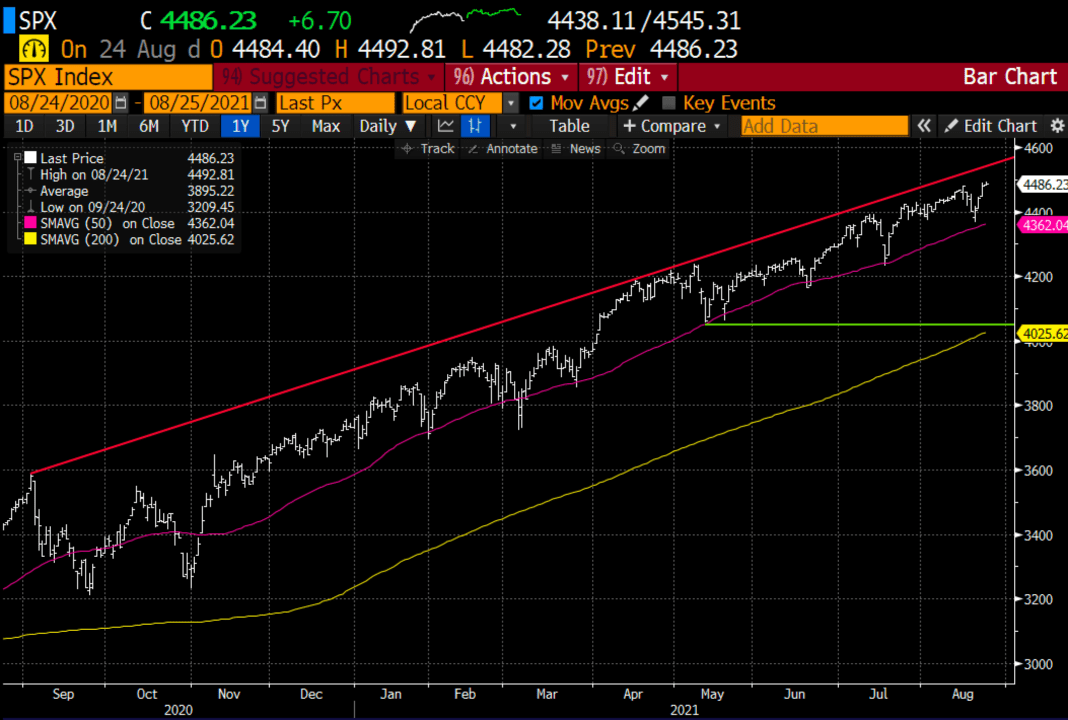 Trade Idea #1: Kroger (KR) recently broke out to a new all-time high as consumers appeared to pull back on eating out and apparently stocking up their fridges again…The stock is far from expensive on a valuation standpoint but might have gotten a bit ahead of itself if in fact delta is behind us and our economy does reopen fully in the fall.

From a technical standpoint, the stock is very extended, nearly 30% from its 200 day moving average, and up 12% in just the last month, placing the stock up 44% on the year. 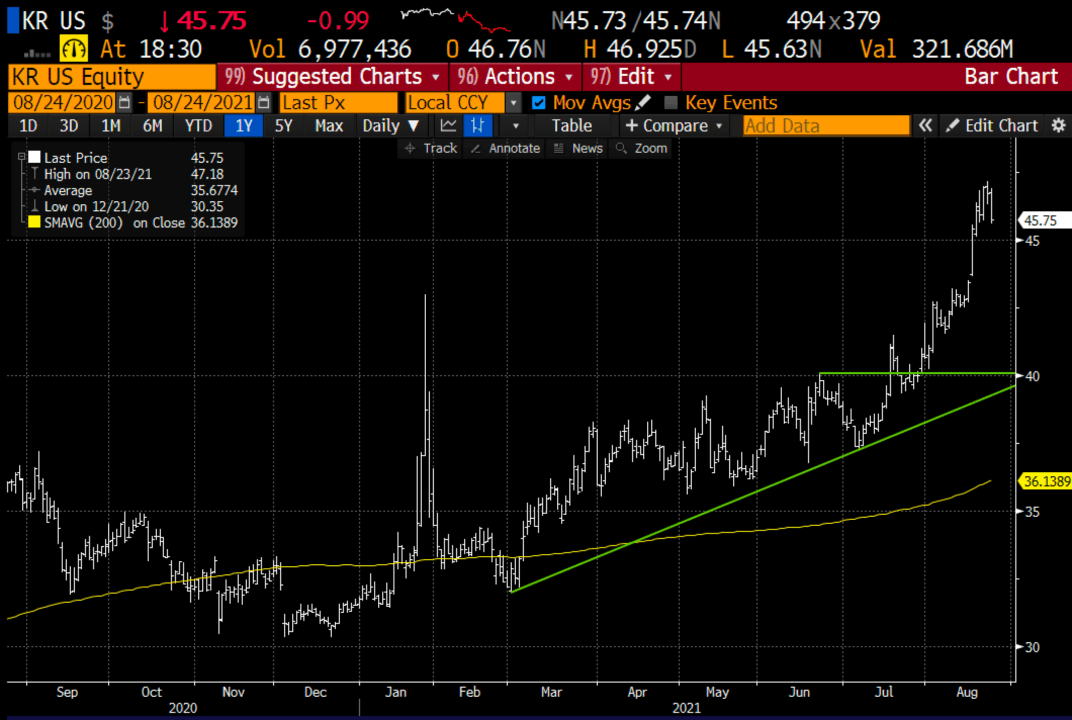 Rationale: risks about 2.5% of the stock price with a break-even down of about 4.3%

Trade Idea #2: Shares of Ford have declined 22% since early June on fears of production cuts due to supply chain issues making computer chips hard to come by. At the same time, the company is ramping up its ambitions in electric vehicles, reportedly doubling the production of the Ford F-150 Lightning.

Ford trades at less than 7x next year’s expected earnings that should grow 21% on 20% sales growth. A cheap stock with a strong history of making cars, if they do that well with EVs they might get re-rated to take on a little bit of the Tesla fairy dust valuation!

Technically you want to stop this trade out on the downside near its 200-day moving average at $12: 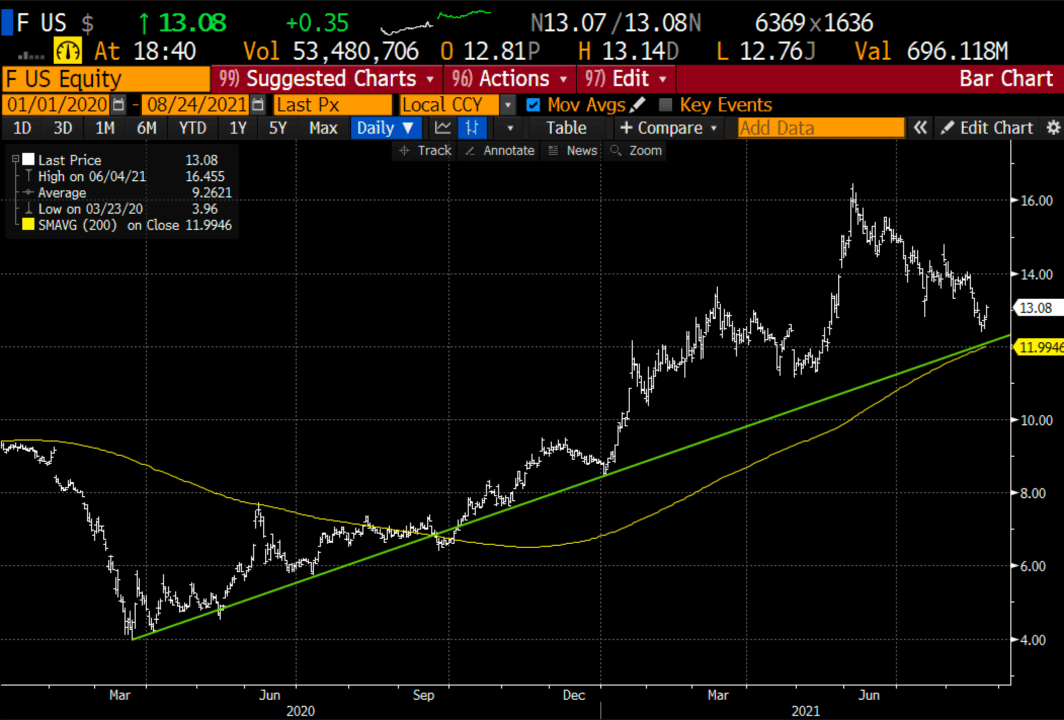 Rationale: risking 8% of the stock price with a break-even up less than that, but effectively stopping the trade to the downside near technical support.

Lookback: Last week we took a look at major oil stocks when the XLE was $48.40. Well, the XLE took a sharp dip and then bounced right at support near $45 and is quickly approaching the downtrend that has been in place since its highs in June: 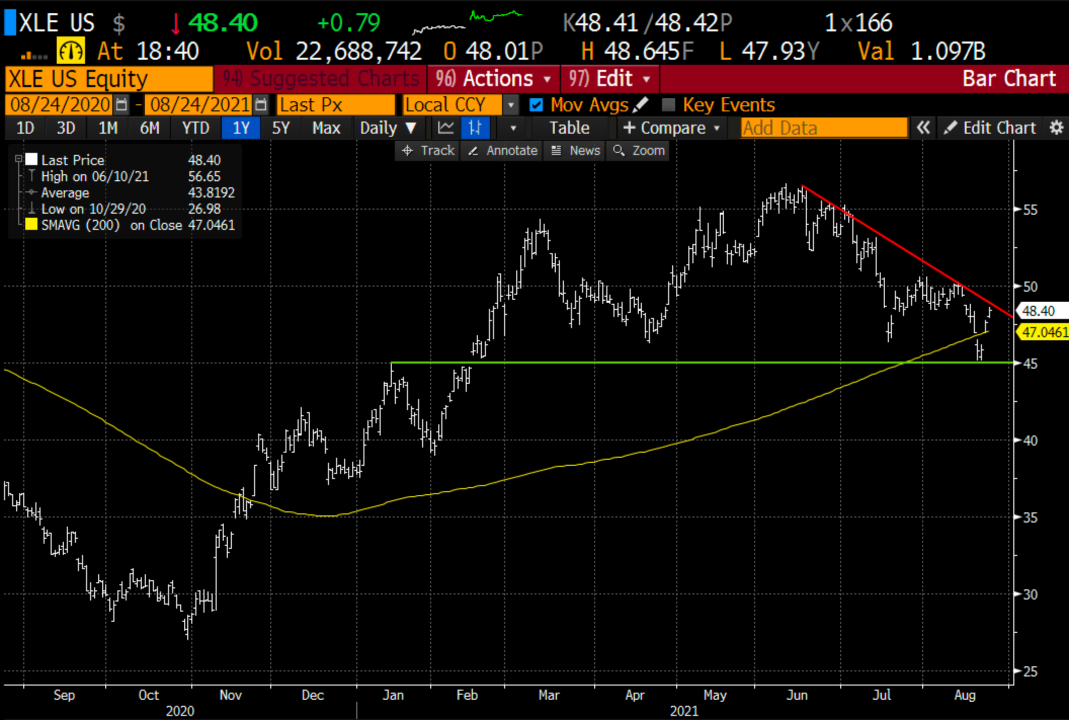 Here was the trade idea from last week: