In The Money with Fidelity Investments: SPX, GLD, XLI

Macro: The Fed pivoted, well they are staying the course on their inflation-fighting efforts but earlier this week they signaled that at today’s meeting they are going to get more aggressive, meaning faster tightening. By the time this video is out we will know what exactly they are prepared to do, and more importantly, what data points have caused them to rethink their prior stance on rates hikes articulated just weeks ago at their last meeting in early May. This is a growing theme in the economy and markets, that data is changing quickly, and this summer it will only get increasingly complicated as hotter economic data will make the Fed more inclined to act aggressively while those actions are likely to make business activity slow. The idea of higher rates and slower growth may be hard for investors to assign the appropriate valuations to stocks near-term given the high level of uncertainty. There will be very sharp rallies like the one we saw in late March post the Fed’s first rate hike of this cycle, but I still believe the S&P 500 (SPX) is not likely to bottom until it at least round-trips the whole move back to its pre-pandemic highs near 3400: 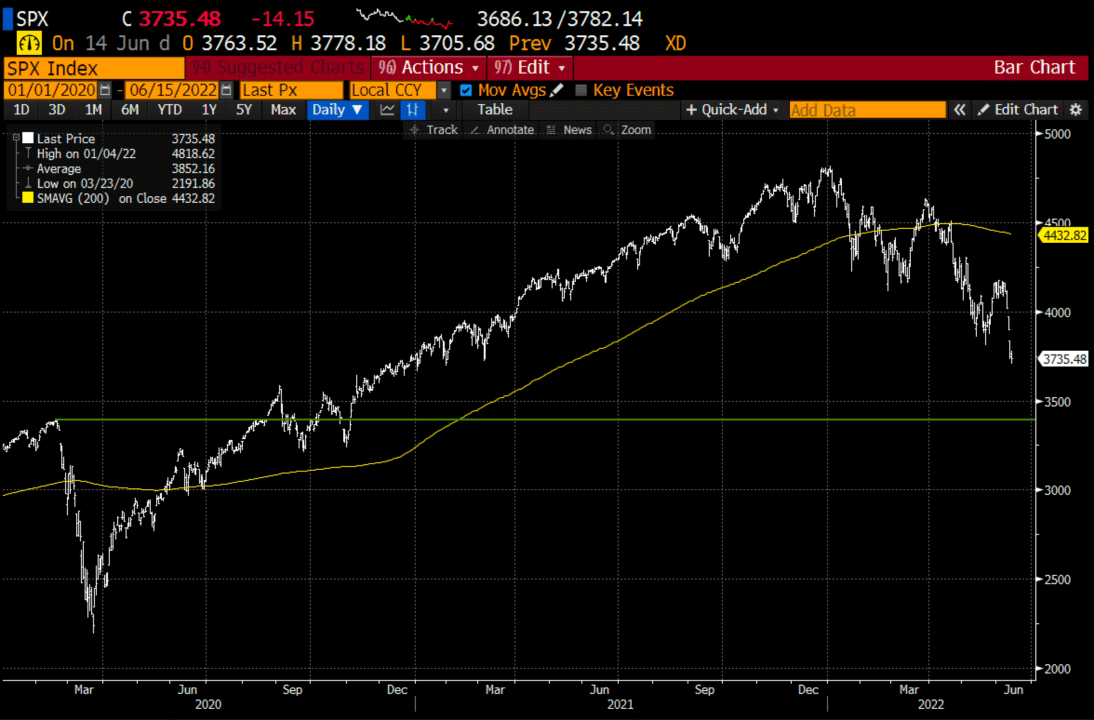 Trade Idea #1: Nothing is working in this market as the “everything rally” fizzles and nearly every asset bubble is buckling under inflation fears. Might Gold start to work again in this uncertain environment? Options prices in the GLD, the etf that tracks the shiny metal are fairly reasonable in a market where vol is blowing out in many different asset classes. Yesterday the GLD breached the uptrend that has been in place since September, but the quicker the Fed moves on inflation, the quicker market participants might start pricing in a slowing of rate increases which could benefit GLD. $175 is 1yr resistance, while a target on a breakout above that would be near $190: 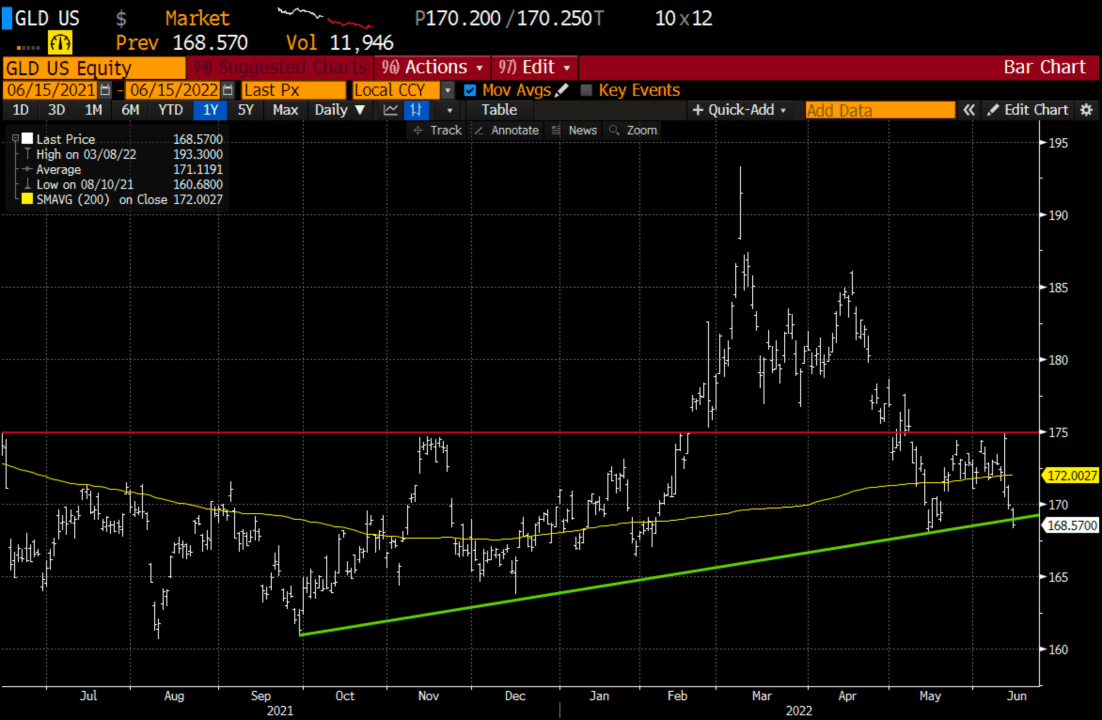 Lookback #1: On May 4th I detailed a bearish trade idea in XLI:

Now the XLI is 88 very near the short strike of the put spread with days to expiration and the spread should be closed. The $10 wide put spread that cost 2.50 that can only be worth 10 now trades around 7 with a month to expiration, risk-reward is no longer attractive to wait for the last bit. My target is still $85 near-term, would look to put back out on the short side on a bounce. 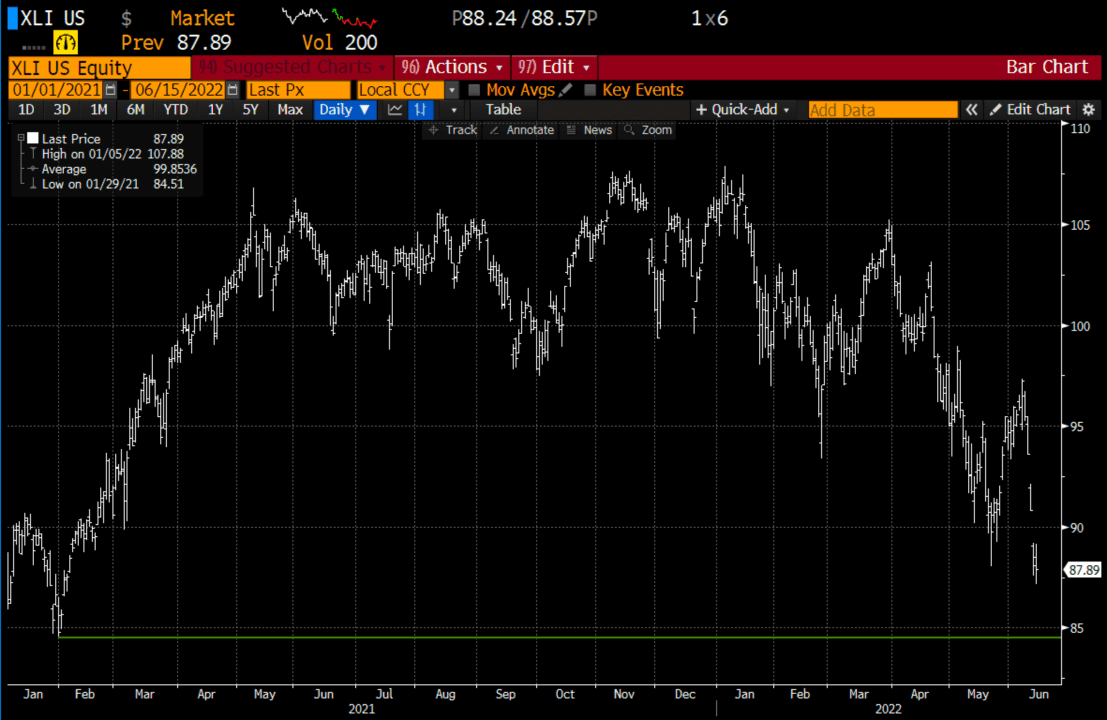 Lookback #2: On May 18th I detailed a bullish trade idea in RIVN:

At the time the stock was $27 and after a short 15% rally the stock is now once again $28.50 with days to expiration, and the spread is worth just 20 cents. it is worth noting that when the stock traded briefly above $32 in early June the June 30-40 call spread was worth more than $3, for more than a double. Trading positions, specifically short-term directional ones need to be actively managed. 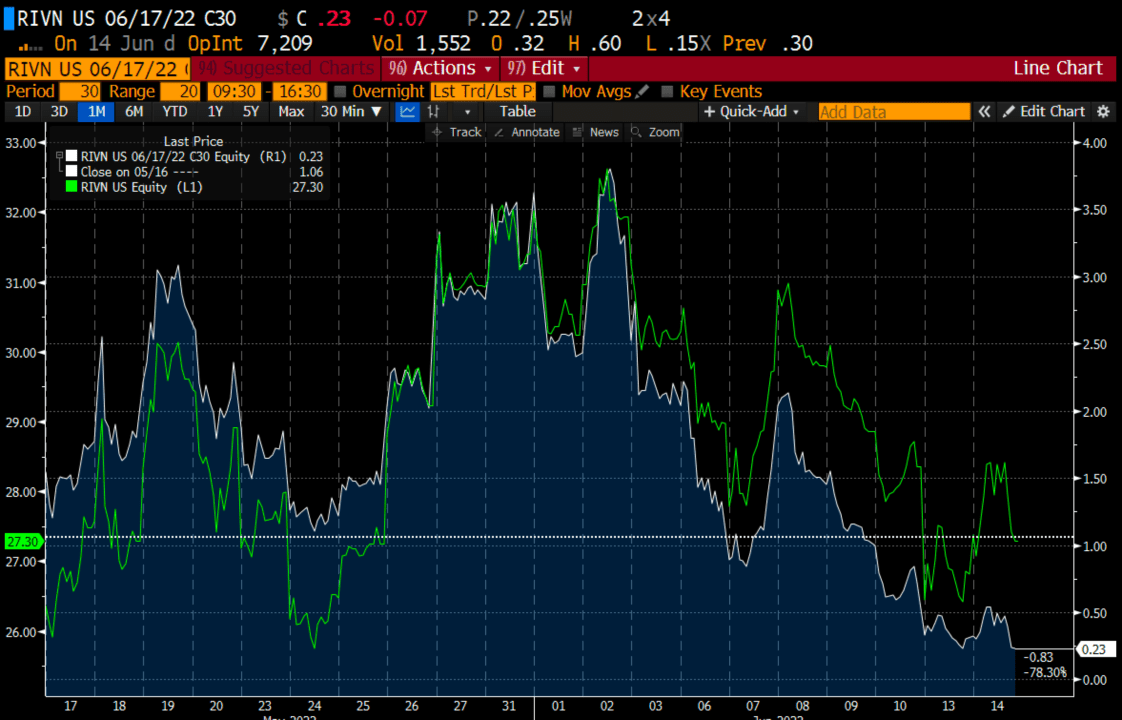