In The Money with Fidelity Investments: SPX, BX, FB, LYV

Macro: A little fear has finally entered equity investors’ purviews. Debt Ceiling, Budget battle, Infrastructure Bill all in question as consumer confidence is waning and prices of all sorts of goods and services are rising in the face of supply chain disruptions and bottlenecks. I suspect all of this passes in the coming months, but very soon investors will have to contend with what be peak profit margins as companies have to make a hard decision, to pass through high costs to consumers or eat the cost of higher wages and input costs. Q3 earnings season which gets underway in the next couple of weeks will likely be cause for concern or relief if the stock market is still well off of its highs. For the first time in a while, the S&P 500 has broken its uptrend: 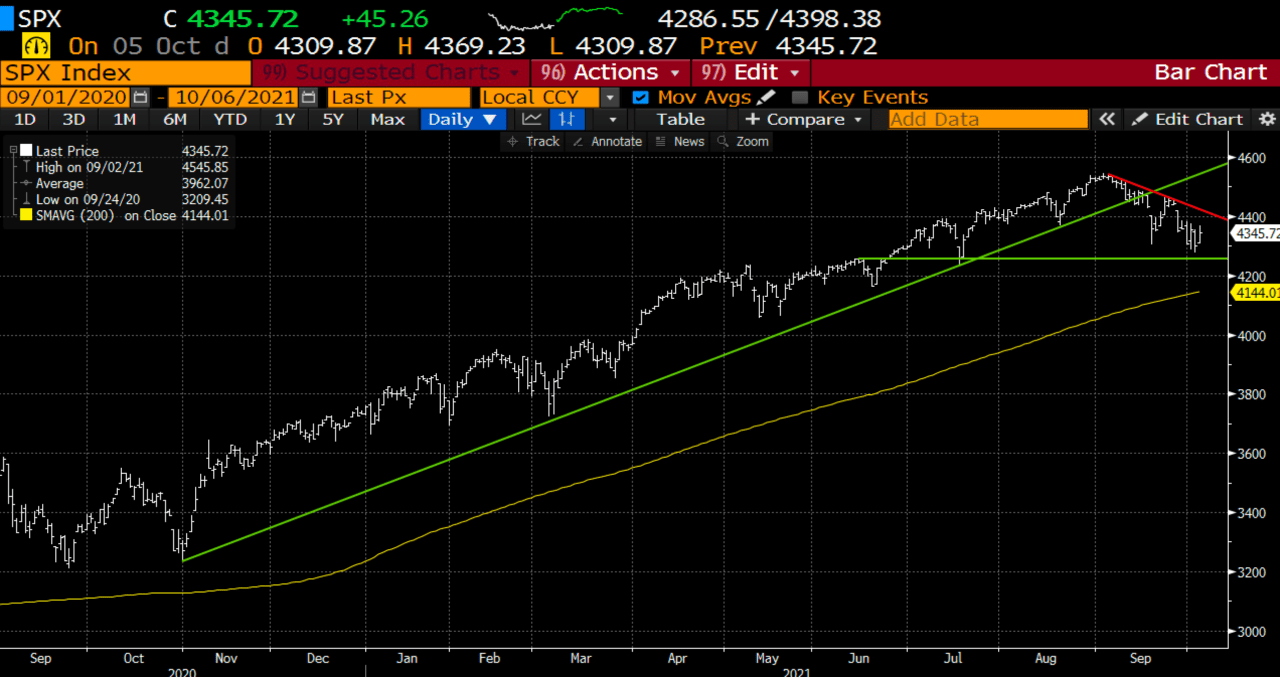 Trade Idea #1: Blackstone (BX) stock was on a monster run, sold off 20% from last month’s highs to Monday’s lows. The stock held at its 100-day moving average which happens to line up with August’s low. When the company reports Q3 earnings in late Oct I suspect it will be a very good report given some of the headlines about their entrance into new businesses like insurance.

Short-dated options which will catch their earnings look dollar cheap, so playing for a retest of prior highs if the market stabilizes and the company reports good Q3 results and Q4 guidance looks attractive with defined risk. 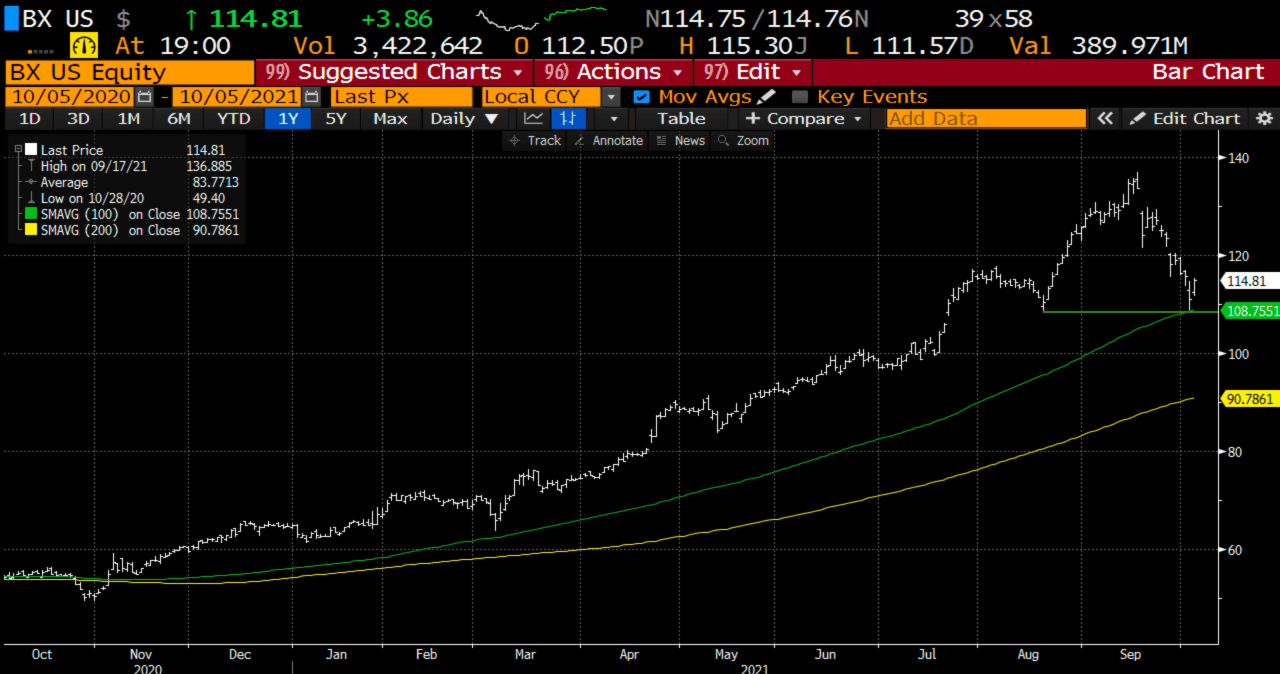 Rationale – the premium paid is very near Monday’s low and where I would want to stop a bullish trade if I were in the stock. This trade idea risks 6% of the stock price.

Trade Idea #2: Facebook has had a terrible no good very bad month. It started with a warning that changes to Apple’s iOS privacy settings could hit their Q3 results. The WSJ started a series critical of FB using leaked documents that suggest that the company knows of the mal effects on teens of their addictive products but chooses to do nothing, among other damning allegations. The woman who leaked the documents went on 60 minutes putting a face to the allegations and the stock sold off 5% Monday, during which a glitch caused their properties to go down worldwide. FB is a widely owned stock, it is now a very cheap stock due to its recent decline, but has no shortage of headwinds. For those who want to remain long the stock, selling calls to add yield near its prior high makes sense

Profits of stock up to 380 with the call-away level at 384, the short strike plus the premium, up 16%, placing the stock back near the highs of the year. The premium collected will serve as a small buffer to the downside. 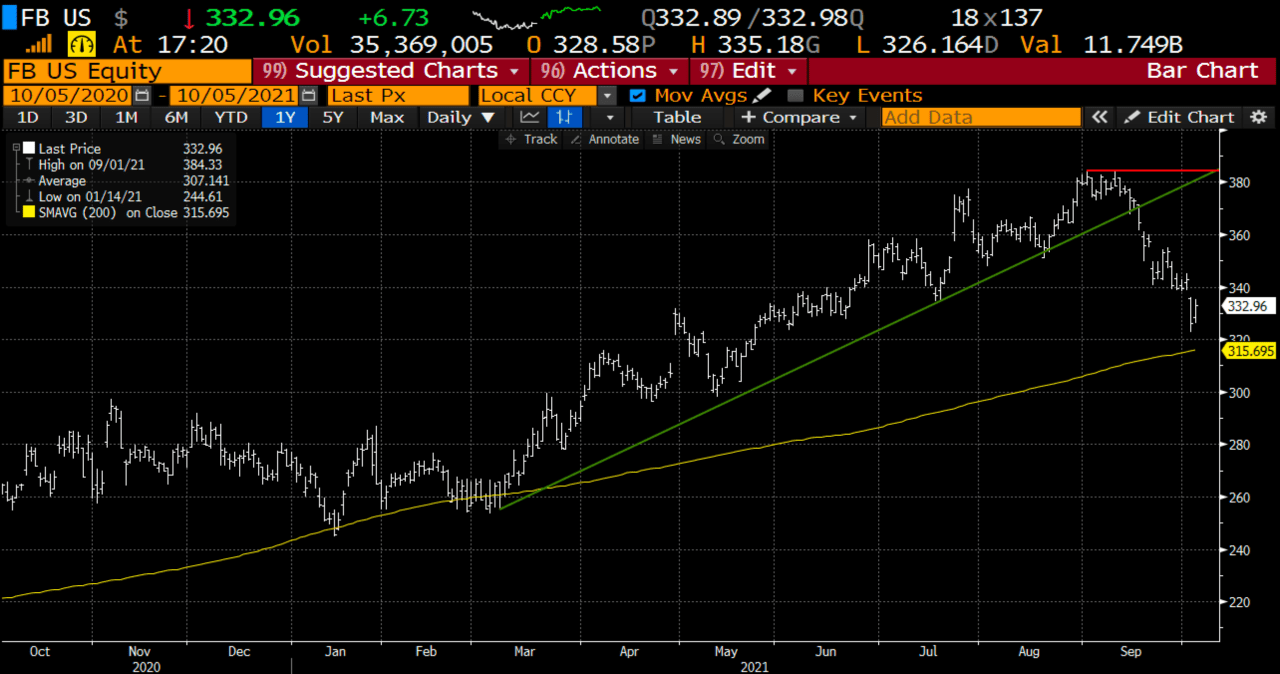 Lookback: On Sept 22nd I detailed a bullish trade idea in LYV… the stock has since rallied to new highs….

Now with the stock near $100 the call spread is worth about $11, it makes sense to close half and take the cost off table.