In The Money with Fidelity Investments: SPX, AAPL, AN, KR

Macro: As discussed last week, the breadth in the major U.S. indices is weak, a handful of names are doing the heavy lifting and they are extremely extended from a technical perspective, and vulnerable from a valuation perspective if growth were to materially slow and the idea of pent-up demand is met with the offset of higher consumer prices as confidence weakens. The S&P 500 has not had more than a 5% decline since March, and if the March decline were the deepest for 2020 it would mark the 4th shallowest peak to trough decline ever in the SPX. 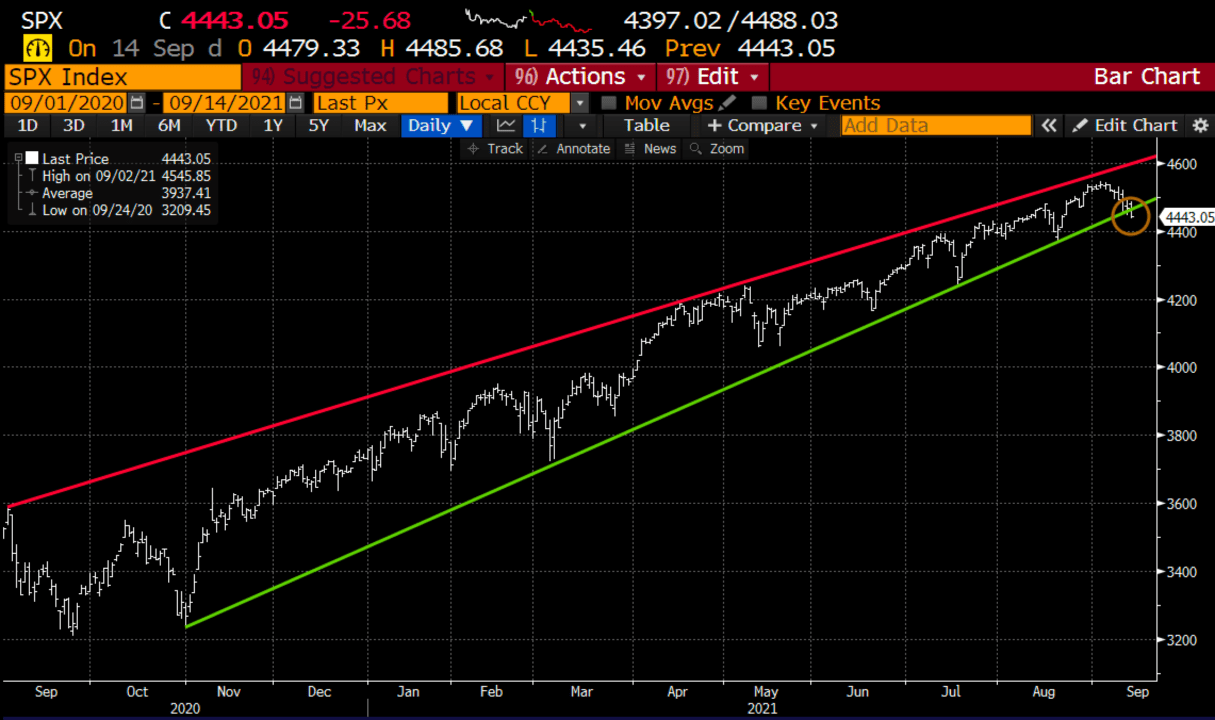 Trade Idea #1: Apple held its annual iPhone event yesterday, and frankly it was a real snooze as the products were merely iterative. Bulls will argue that they are augmenting their 5G offerings, which will further spur services usage, causing users to spend more in the App store and using their original services which is recurring revenue that should command a higher multiple for the stock. Well, services are about 20% of the company’s sales and they are not growing at the sort of rate that should command a premium multiple for a company that is only expected to grow earnings about 1% in fiscal 2022 and sales by 3%.

When the company reports earnings in late October we could hear about supply chain and shipping disruptions that could affect holiday sales and supplies.

The stock has underperformed the Nasdaq 100, which is up 20% year-to-date, despite being its largest component at 11%, up only 11%.

Oh, and the technical setup looks poor IMO. The one-year chart shows the stock breaking below the uptrend that has been in place since its lows in May, and quickly approaching its breakout level from early July which it has struggled until very recently to establish a new range. A break below and we could see a re-test of its 200-day moving average near $134. 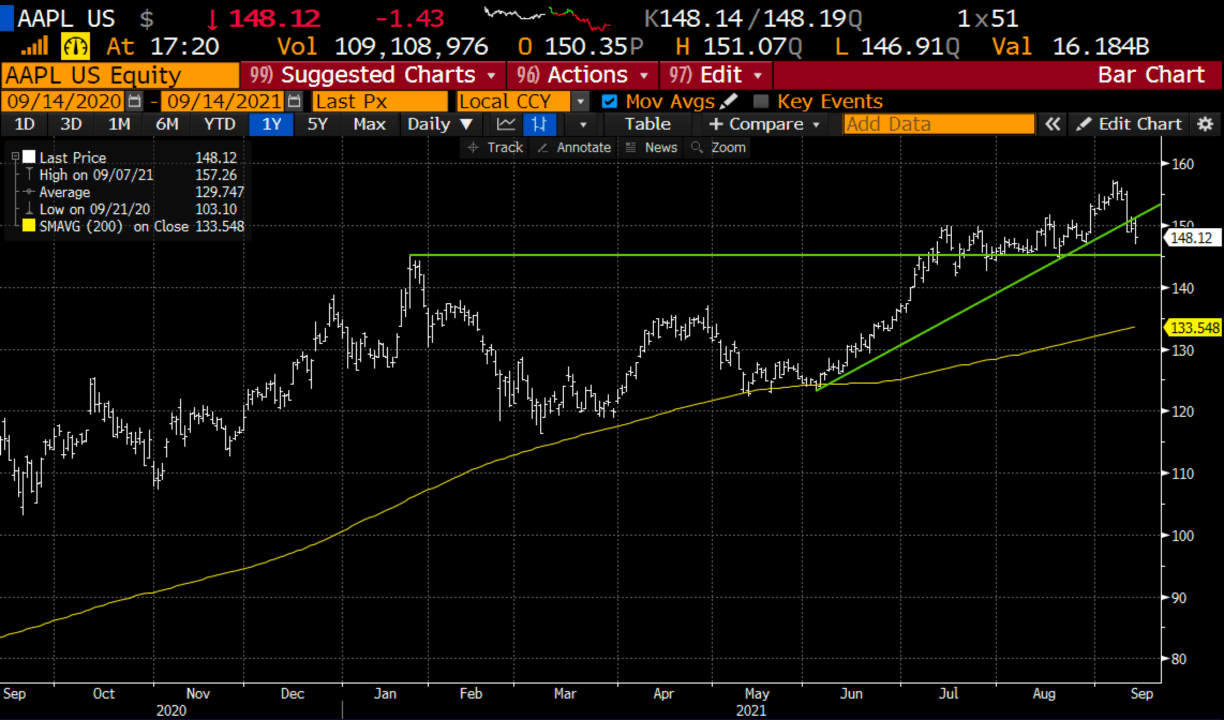 Lastly, the chart going back to January 2020 shows the clear rejection at the resistance from its 2020 highs and no real support until it gets near the uptrend from its September 2020 lows, which also lines up with its 200-day near $133 and a break-below that brings you to the March-May double bottom just above $120: 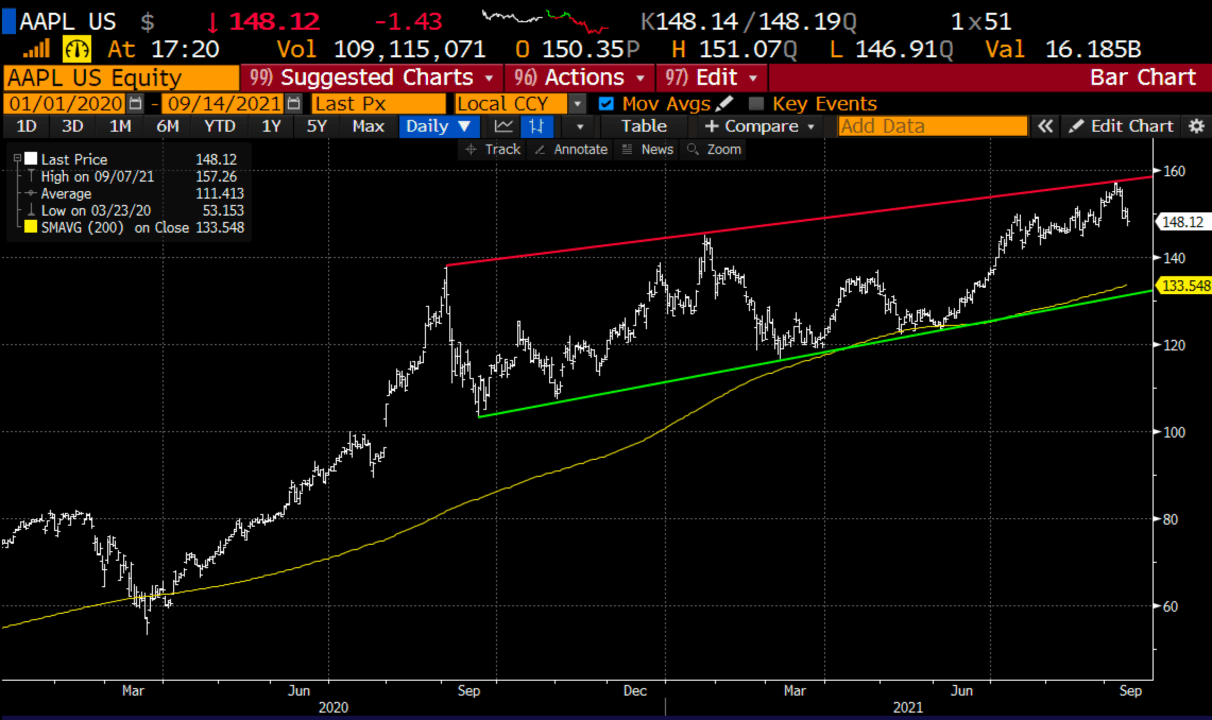 Rationale: This trade idea risks 3% of the stock price, has a break-even down 4.5%, and a max profit of 14% if the stock is down 18% in two months. It is worth noting that the stock has had four peak to tough declines from all-time highs over the last four years of at least 20%, 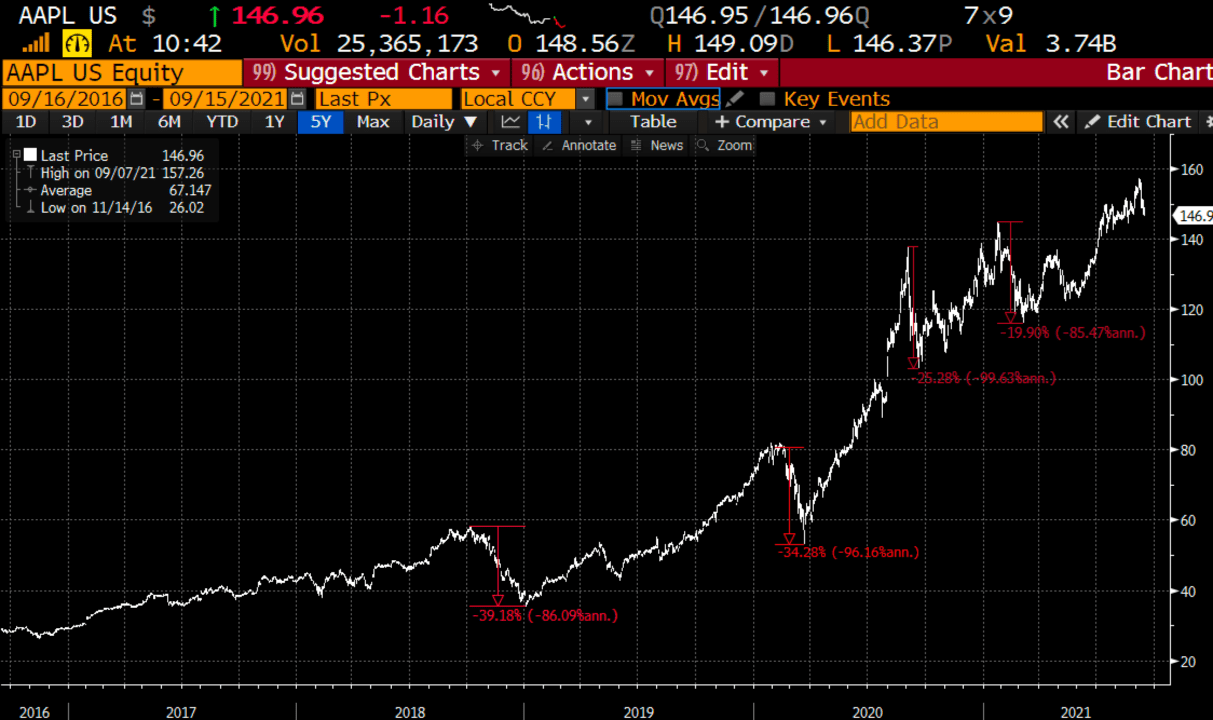 Trade Idea #2: Another consumer product that is feeling the sting of supply chain disruptions, like Apple, in the form of computer chips, Auto manufacturers are increasingly using them. Many manufacturers have had to stifle production due to the lack of them.

AutoNation (AN), which is the largest auto dealer and service provider in the U.S. is seeing an increasing mix shift towards used cars which has alleviated a great deal of pressure from new car shortages and is resulted in record eps and sales for the company, expected to be up 62% and 25% respectively this year. Additionally, while the company is quickly expanding its used car dealerships they have also successfully executed their expansion into digital sales, which was clearly accelerated by the pandemic, with more than half their sales originating online.

The stock trades at just 7x earnings and 3x sales vs Carvana (CVNA) which has about 45% of AN’s total sales, has never booked a quarterly profit, and trades 4.5x sales… so that is a $7.3 billion market cap compared to $53 billion. This makes no sense!

Also, AN from its lows in March 2020 has one of the best-looking charts in the market, as long as it holds that uptrend. 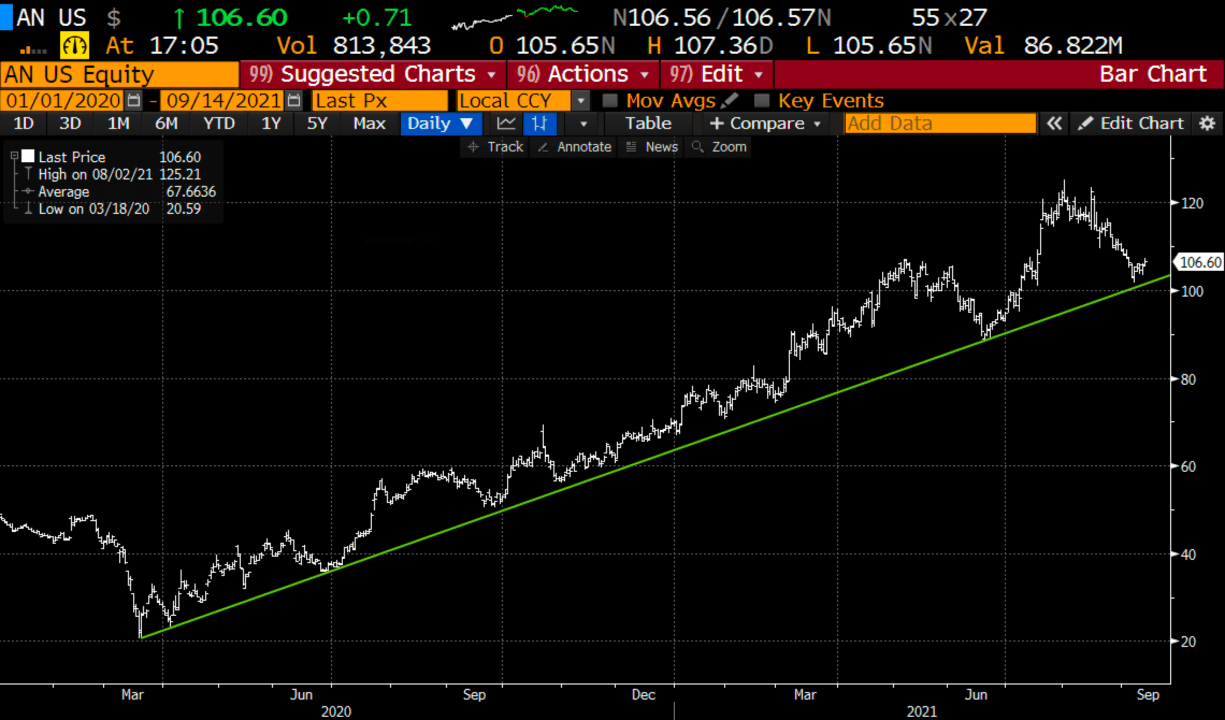 Rationale: this trade idea risks about 4% of the stock price and has a break-even up ~8%

Lookback – On Aug 25th I detailed a bearish trade idea on shares of Kroger:

Now with a few days to expiration and the stock just below $42 it makes sense to take the profit. The Sept 45 put is now worth $3.30. The stock could find support in the coming days near the uptrend from its March lows, just above $40. At this point, it is a near-term market call with the earnings news out of the way. 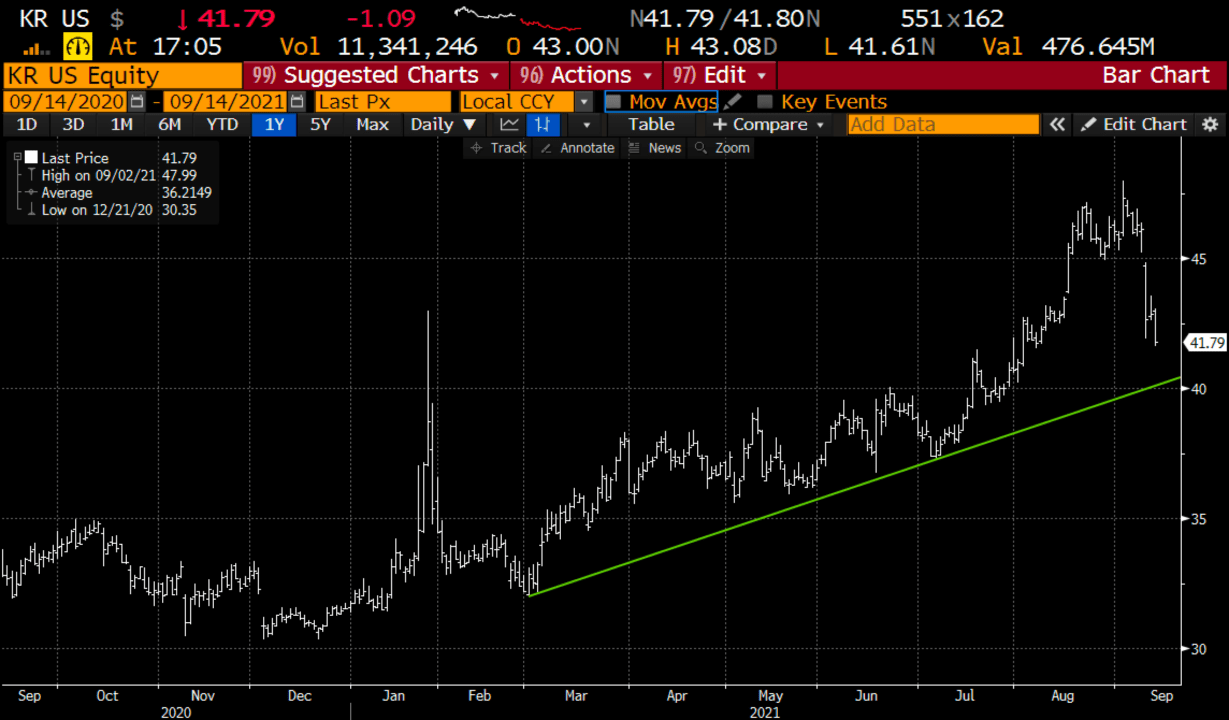