In The Money with Fidelity Investments: NDX, MSFT, TSLA, IYT

Macro: The S&P 500 has enjoyed more than 50 record highs so far in 2021, that with 4 months to go…1995 holds the record with 77! Since 1980 the S&P has averaged four and half 5% peak to trough declines, this year we have had only 1. But there have been some massive divergences between the SPX and the Nasdaq this year. The Nasdaq has its fewest number of stocks trading above their 50-day moving average since last September, suggesting weakening breadth, and has had two 12% plus peak to trough declines since last September.

And then there is this gem from my friend Carter Braxton Worth of Cornerstone Macro:

The recent rotation into tech, with rates, stuck below 1.4% in the ten-year U.S. Treasury Yield makes me think investors are getting a bit more cautious, crowding into the safest names. The 1-year chart of the Nasdaq 100 might give those who think we are off the races a bit of pause… 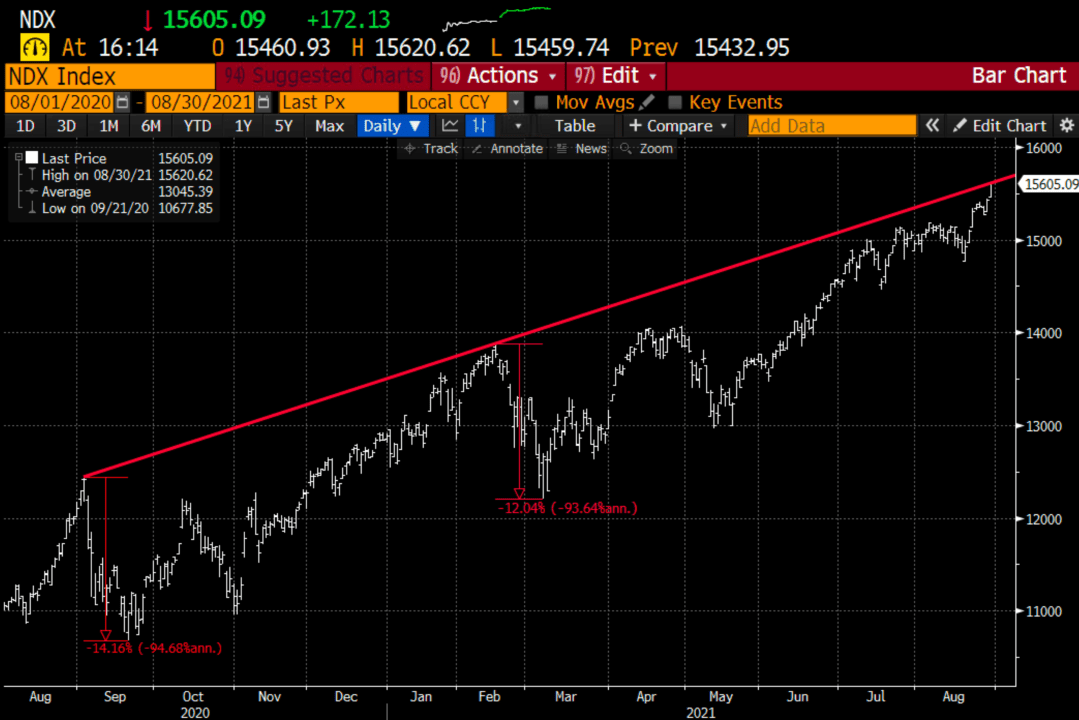 Trade Idea #1: Short, with defined risk MSFT, the second-largest stock behind AAPL. MSFT is up 36% on the year, doubling the performance of the Nasdaq, nearly 20% above its 200-day moving average, trading nearly 35x expected FY eps and nearly 12x sales, both 20-year highs and lastly 30-day at the money implied vol is nearing its 2020 pre-pandemic lows, Vol is cheap as chips. 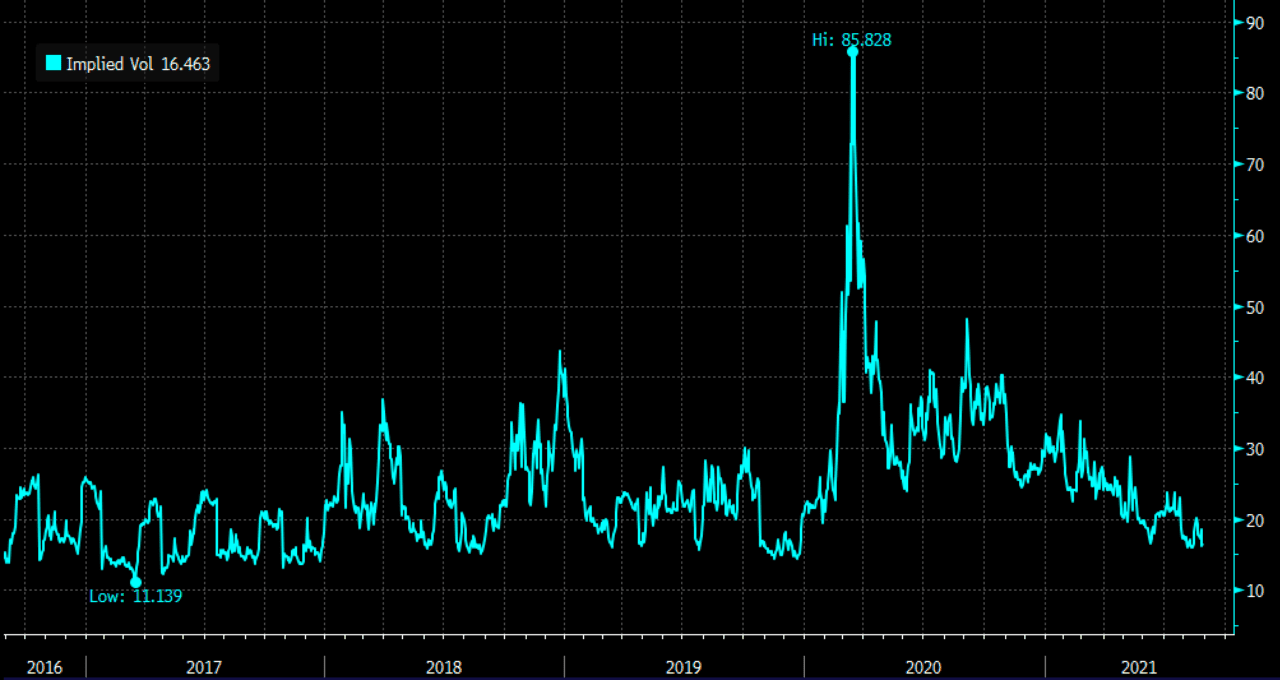 Play for a break of the uptrend from early June where much of the stock’s outperformance started and possibly for a move back to its breakout level near $265: 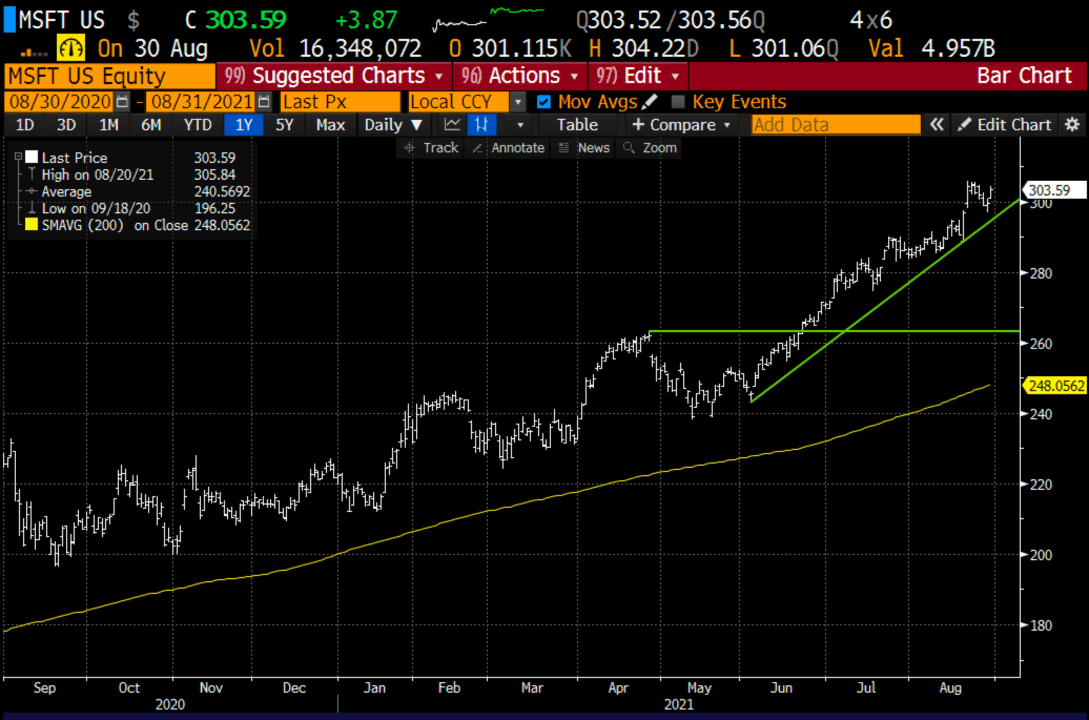 Rationale: this trade idea risks 2% of the stock price, and breaks even down 3%. Look to spread by selling a lower strike put if the stock were to sell-off.

Trade Idea #2: TSLA Collar… Tesla is one of the most controversial stories in the stock market, largely due to its valuation, with a $732 billion market cap, it makes up more than 50% of the market cap of all of the publicly traded auto companies globally, despite having its lowest EV market-share since 2019 and low single digits market share among all autos.

Shares of TSLA have underperformed the broad market year to date, down about 20% from its all-time highs made in January, but up nearly 1000% from its March 2020 lows. The stock though has held its uptrend from its 2020 lows very impressively, with little overhead resistance up to its prior highs around $900: 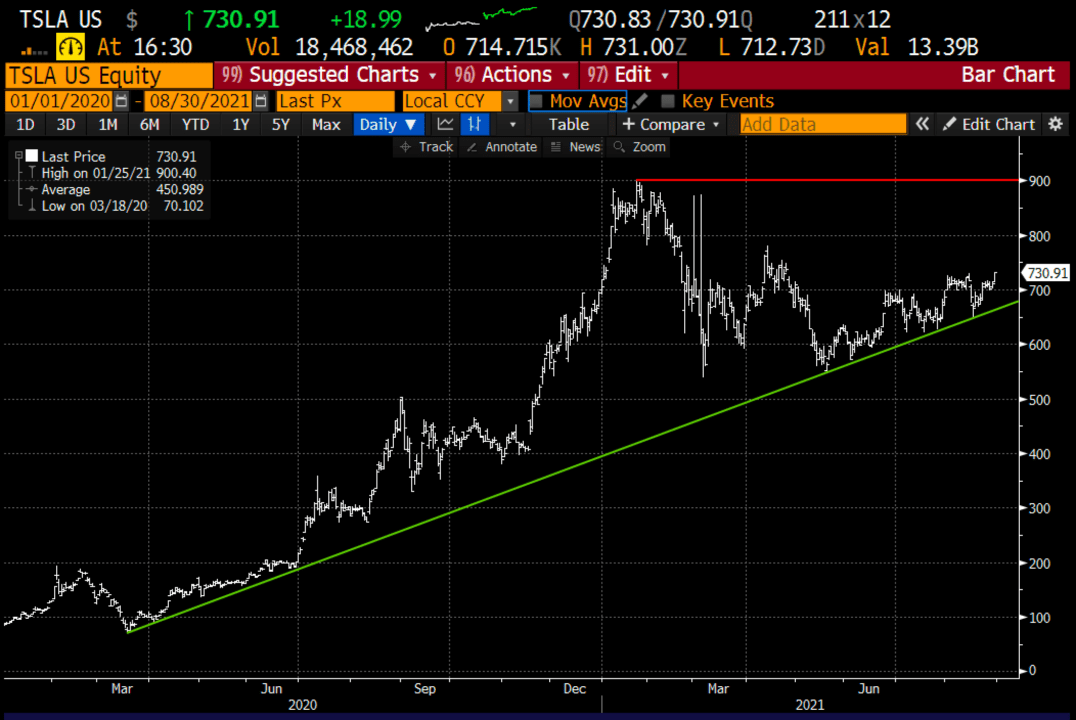 Losses of the stock down to $600 but protected below

This trade idea will show the mark to market losses as the stock rallies towards the short call strike as it will appreciate in value the closer it gets to the strike, as the long put will lose value. But will show gains the closer the stock goes towards the long put strike as the put will gain in value as the short call will lose value. All of this will be netted against the gains and losses of the stock.

Lookback: On Aug 1th, I made the case that if the broad market were to break out to new highs that the Dow Transports should follow to confirm… but they have not, and it’s time to cut the trade… 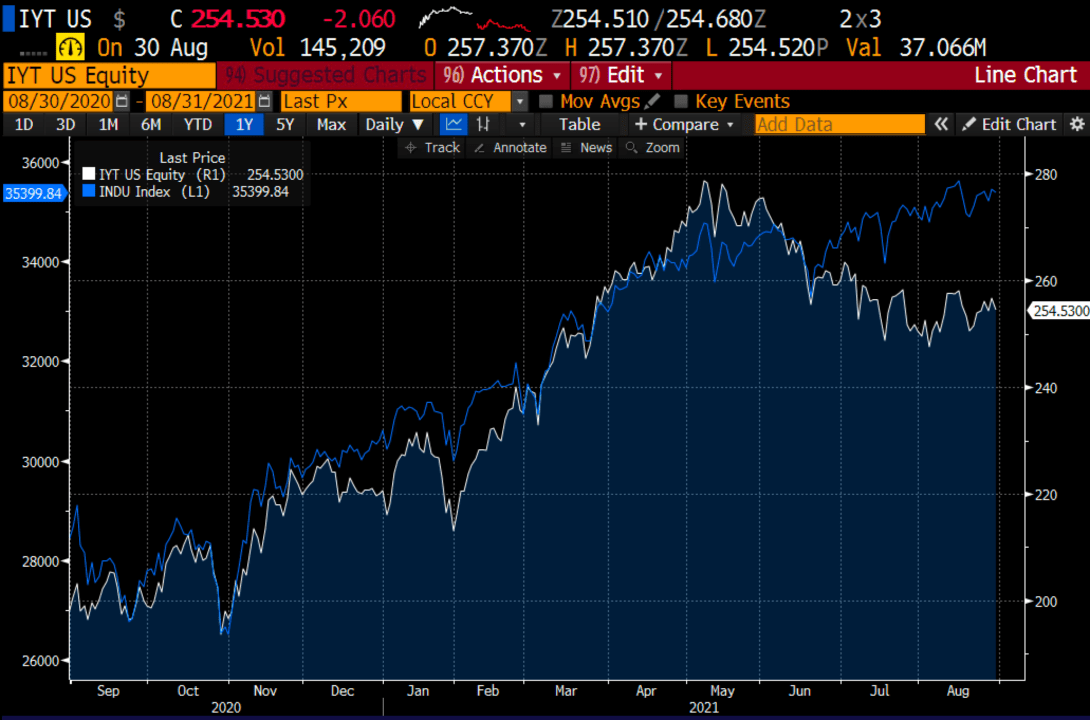