In The Money with Fidelity Investments – NDX, FXI, JPM, HD

Macro: There are two stock markets for tech stocks. There are the largest tech companies by revenue, who have garnered the largest market capitalizations the world has ever seen and the largest year-to-date gains. And then there is everything else, once great stories where there appears to be no bottom in sight. But if you are invested in the Nasdaq 100 (NDX), where six stocks, Apple (AAPL), Microsoft (MSFT), Alphabet (GOOGL), Amazon (AMZN), Meta (FB), and Tesla (TSLA) make up 50% of the weight and most of its gains then you are doing just fine. But if you are invested in what some investors have deemed the most “innovative” tech companies then you are getting trounced. See Kathie Wood’s ARK Innovation Tech ETF (ARKK) which is down about 40% from its all-time and 52-week highs made in February and down 24% on the year, vs the NDX which is down only 5% from its all-time and 52-week highs made just last week and up nearly 24% on the year, despite most of the stocks in the index down well more from their highs. The spread between the NDX and ARKK is astounding. 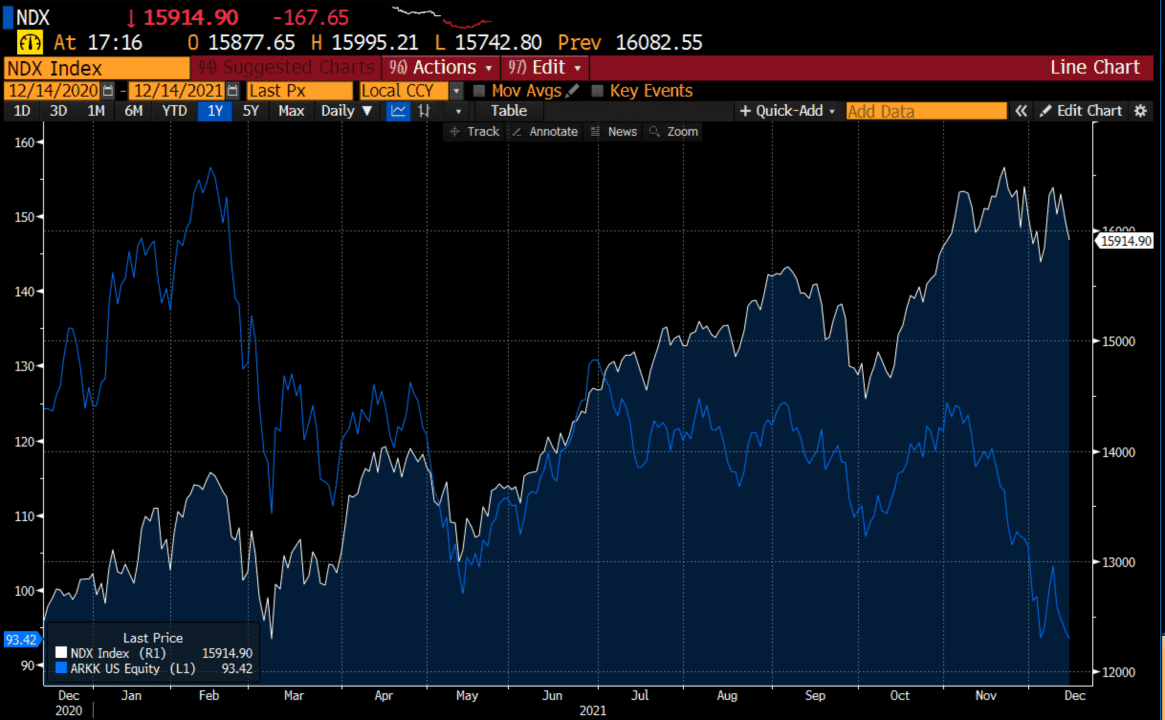 Trade Idea #1: Earlier in the week on CNBC’s Fast Money my good friend and chartist extraordinaire Carter Worth highlighted the increasingly attractive technical look of Chinese stocks, particularly those listed on the Shanghai Composite. 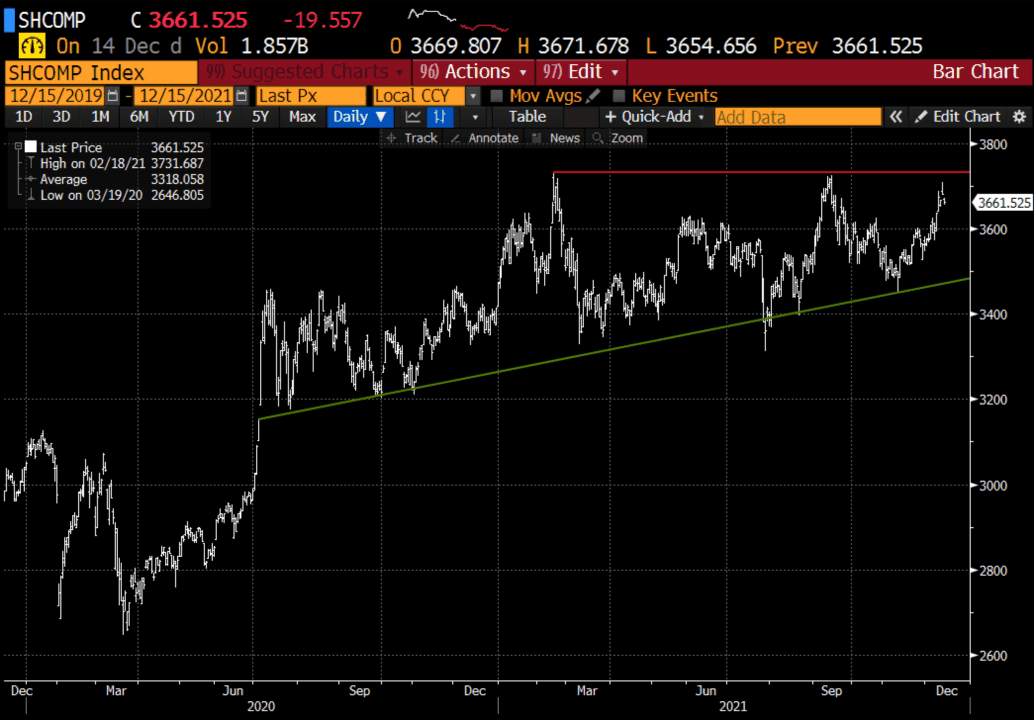 But much like the Nasdaq, as not all U.S. tech stocks are alike, neither are Chinese stocks. The FXI, the iShares Large Cap China ETF that is heavily weighted towards mega-cap tech has traded very poorly in 2021 due to the heavy hand played by Chinese regulators. The FXI is down 30% from its 52-week highs made in March and down about 17% on the year. With the FXI just above $37, it might find support where it has on numerous occasions over the last five years. Might a bounce in the new year have the ETF re-testing its 200-day moving average near $43 from a very oversold position? 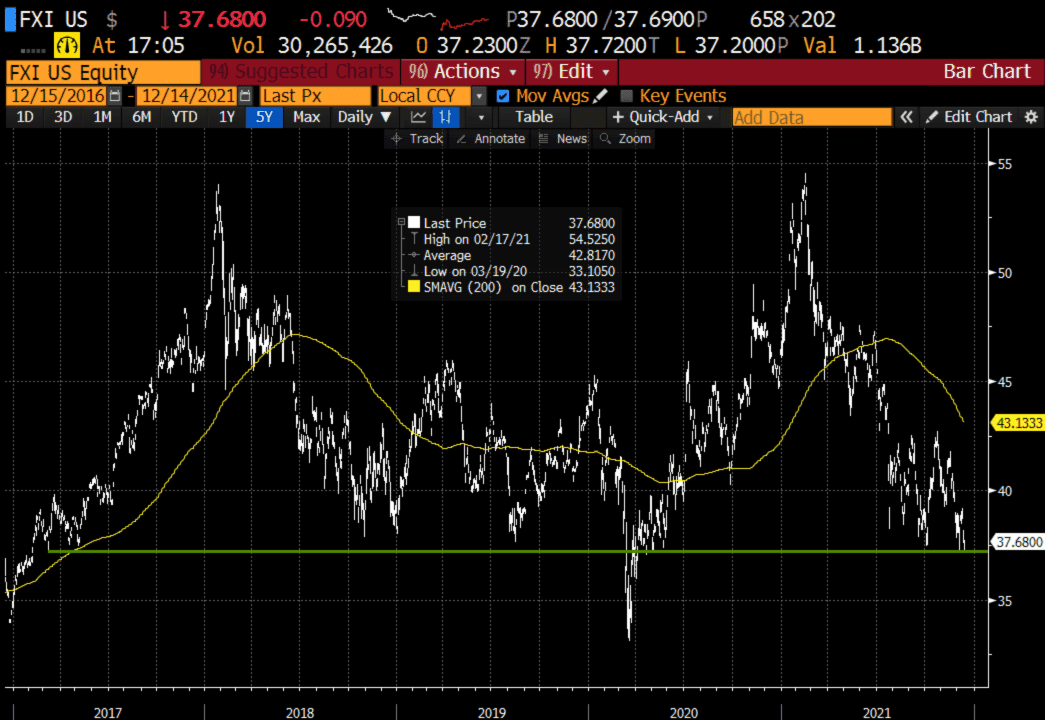 Rationale: this trade idea risks ~3,5% of the ETF price, has a breakeven up ~5%, has a max potential gain of nearly 3x the premium at risk if the ETF is up ~14% in a little more than 2 months.

Trade Idea #2: JPM looks heavy. Investors don’t exactly know what to make of the flattening yield curve with short rates going up and longer rates going down. Despite the stock being up 25% on the year, it’s sitting right on its 200-day moving average, 3.5% below its 50-day, and down 8% from its all-time highs made in late October. While JPM slightly outperforms the SPX’s 23.5% YTD gains, the SPX is 7% higher than its 200-day moving average and a few percent above its 50-day where it has found technical support over the course of 2021. JPM’s leadership is waning. The company will report its Q4 earnings on Jan 14th, and their results and guidance could set the tone for a different return regime in 2022. 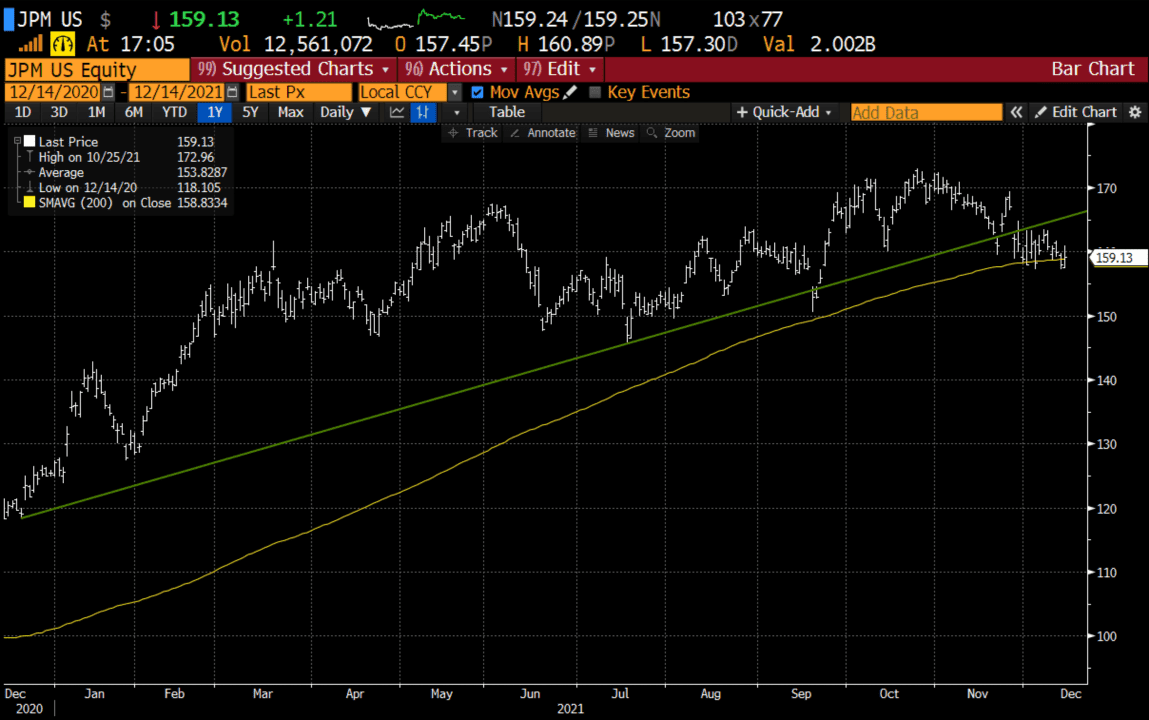 Rationale: this trade idea risks less than 2% of the stock price, has a break-even own of about 4,5%, and a max potential gain of 3x the premium at risk if the stock is down about 10% in a little more than a month.

Lookback:  Last week I took a bearish view of HD

Shares of HD are now just above the put strike, down 13 and the put spread is worth ~8, it makes sense to keep an eye on this spread as the potential for a quick break below $400 might offer the opportunity to take a quick profit. 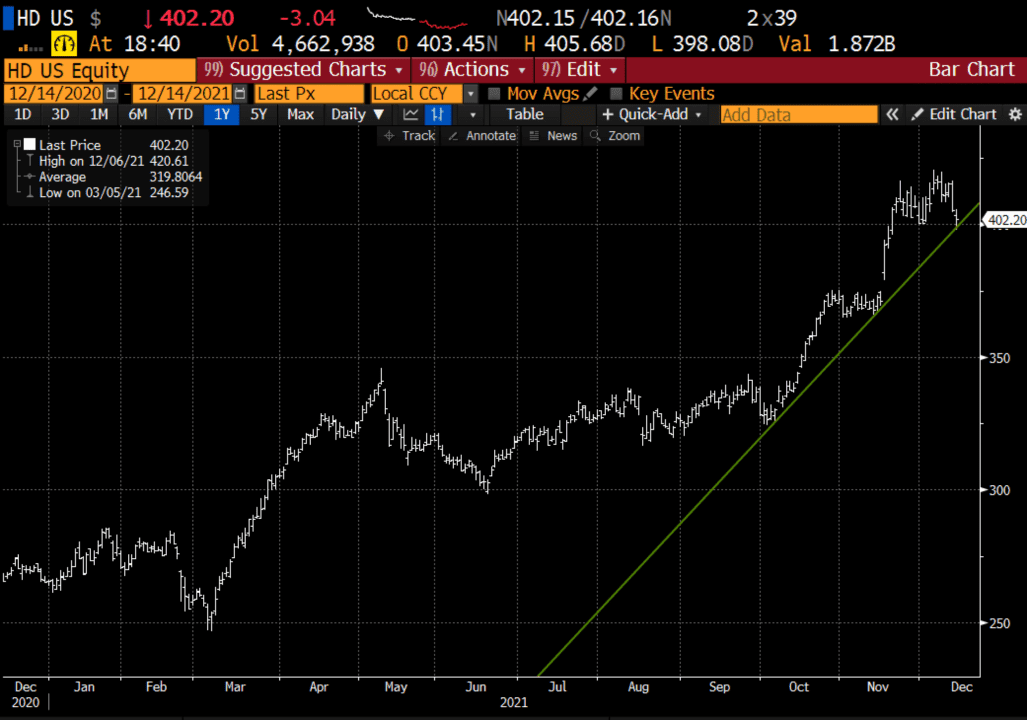