In The Money with Fidelity Investments: DIA, IYT, NVDA, GLD

Macro: There is no shortage of odd sayings and lingo on Wall Street, many of which date back to the turn of the century, the other century, the 20th century. One of those idioms is The Dow Theory, dreamed up by the first editor of The Wall Street Journal and founder of Dow Jones in 1896, basically suggesting that if the Dow Jones Industrial Average is making a new high, the Dow Jones Transport Average should follow suit. The inability for the Transports to confirm the high in industrials could suggest that the broad market could head lower. Now that is some old-time stuff and very few equity investors even follow the Dow as it is a price-weighted index of 30 large-cap stocks vs the S&P 500 which is market-cap weighted of 500 stocks. But make no mistake, the Dow Jones Industrial Average, up 15% on the year is in a nice uptrend. 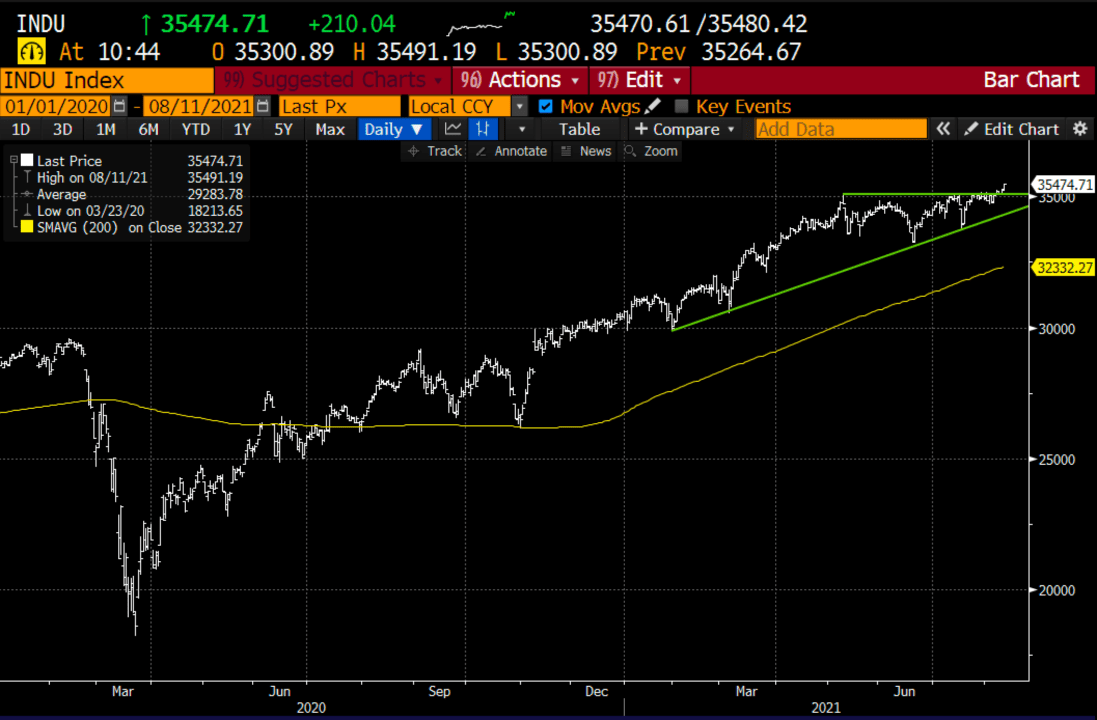 Trade Idea #1: So let’s look at the Transports or the ETF that tracks the group, the IYT, which is up nearly as much as the Dow, but down about 10% from its all-time highs made in May. Might X mark the spot and set up for a retest of the uptrend near $275? 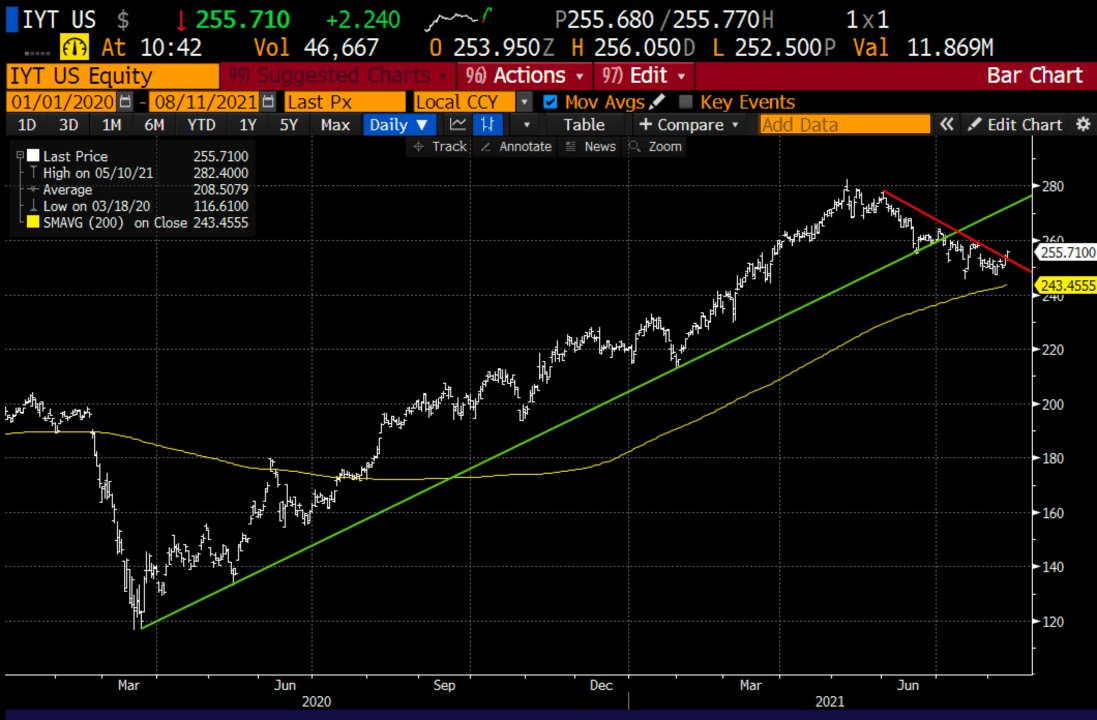 Rationale: this trade idea risks 2.3% of the ETF price and has a break-even up a little less than that as it is in the money with a max potential gain of 6% if the ETF is up 8% in a little more than a month.

Trade Idea #2: Sell Nvidia (NVDA), with defined risk of course… Shares of the semiconductor company are up 53% on the year and up 32% from its 200-day moving average where it was trading just two months ago. From a valuation perspective, the stock trades extremely expensive at 46x expected FY23 eps that is only supposed to grow ~10% and 18x sales expected to grow about 11%.

From a technical perspective the stock failed to make a new high last week and it looks poised to pull back and retreat its mid-July low near $180 and if it were not to hold there then it could re-test its early June breakout level near $160: 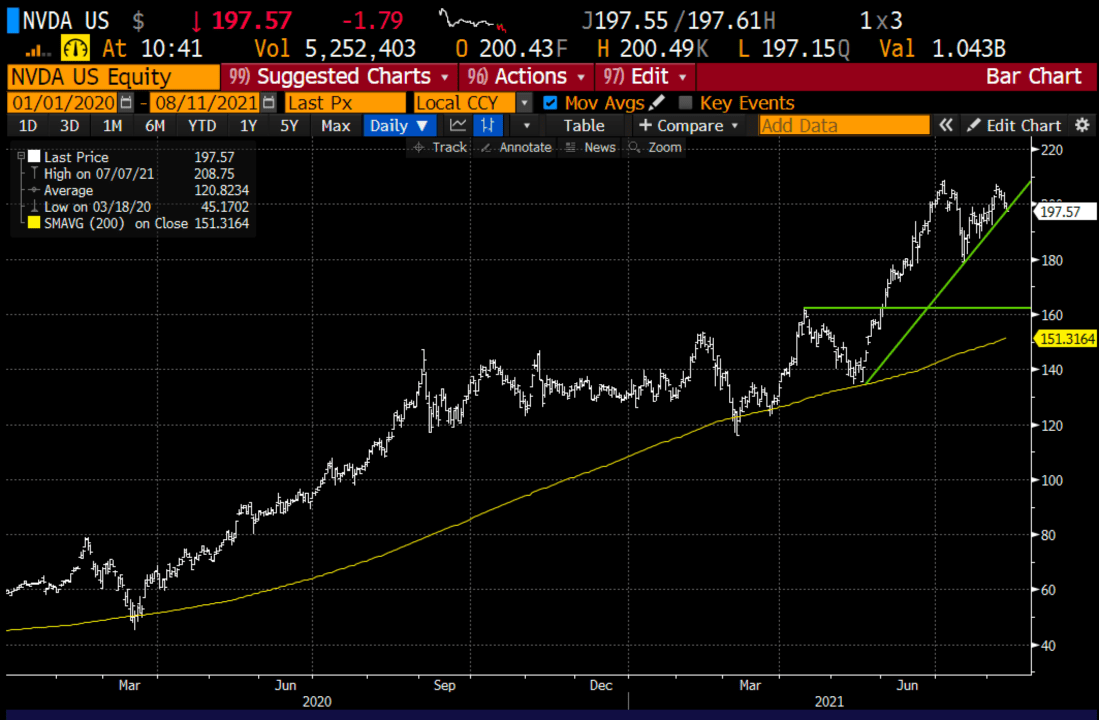 The company is expected to report Q2 results next week, Aug 18th.

Rationale: this trade idea risks 3.5% of the stock price, breaks even down about 5% and has a max potential gain of nearly 12% of the stock price if it is down 16% in a little more than a month. The options market is implying about a 6% one-day move the day after earnings. The stock has had SIX double-digit peak to trough declines from all-time highs in the last year….with the smallest being about 13% and the largest about 23%.

Lookback: On May 19th when GLD was $176 I detailed a bearish view on the ETF that tracks the shiny mental –

Now with the GLD  just above technical support near $160, with more than a month to go to expiration, it makes sense to take the profit in this trade idea. At $163 the $20 wide put spread that cost $5 is now worth about $12, I’d likely take the profit and look to re-short on a bounce. 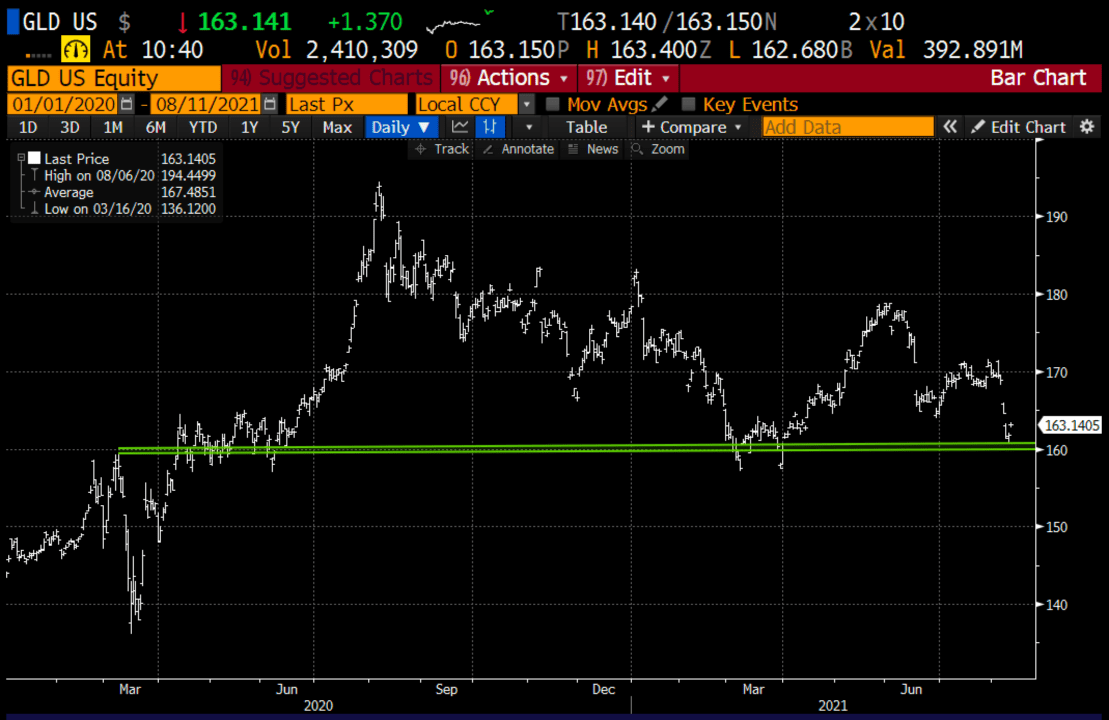