In The Money with Fidelity Investments: AAPL, SPY, XLP

Macro: Markets are in turmoil, specifically equities markets since last week’s speech on the hill from Fed Chair Powell confirming the Cental Bank’s intent to raise Fed Funds by 1/2 a point at next week’s meeting. This will mark the first time the Fed has raised by 1/2 a point since…wait for it, May 2000. Now if you are new to markets, you might not know that back in 2000 the stock market had just capped an epic multi-year run, and the Fed started to raise rates to stem further inflating an asset bubble, sound familiar? At the time there were a handful of stocks that had been doing much of the heavy lifting for the broad indices, and when they have it up in mid-2000, the bull market was over and a two-year bear market commenced. The Nasdaq is in “bear territory” down 20% on the year with the S&P 500 showing fairly decent relative strength to the Nas, only down 12%, but I suspect we will see the SPX down 20% on the year in the not too distant future. Investors are grappling with rising rates, rising prices of all sorts of goods, commodities, and services, and a rising dollar. This is turning into a tricky situation for the Fed, by signaling that they will be aggressive in raising rates to tamp down inflation they may put the economy into recession, and while that remains a possibility, stocks will likely have more downside.

Hedge Idea #1: AAPL will report earnings after the close tomorrow, Thursday, April 28. The options market is implying about a $9 move in either direction or about 5.5%. When the company reported its fiscal Q1 results in late January there were many of the same macro concerns that there are now, but the war in Ukraine and further lockdowns in China were not part of the equation. The stock is in a very similar spot now than it was then. The stock has been fairly range-bound for 2022, despite being in a fairly wide range between 180 and 150: 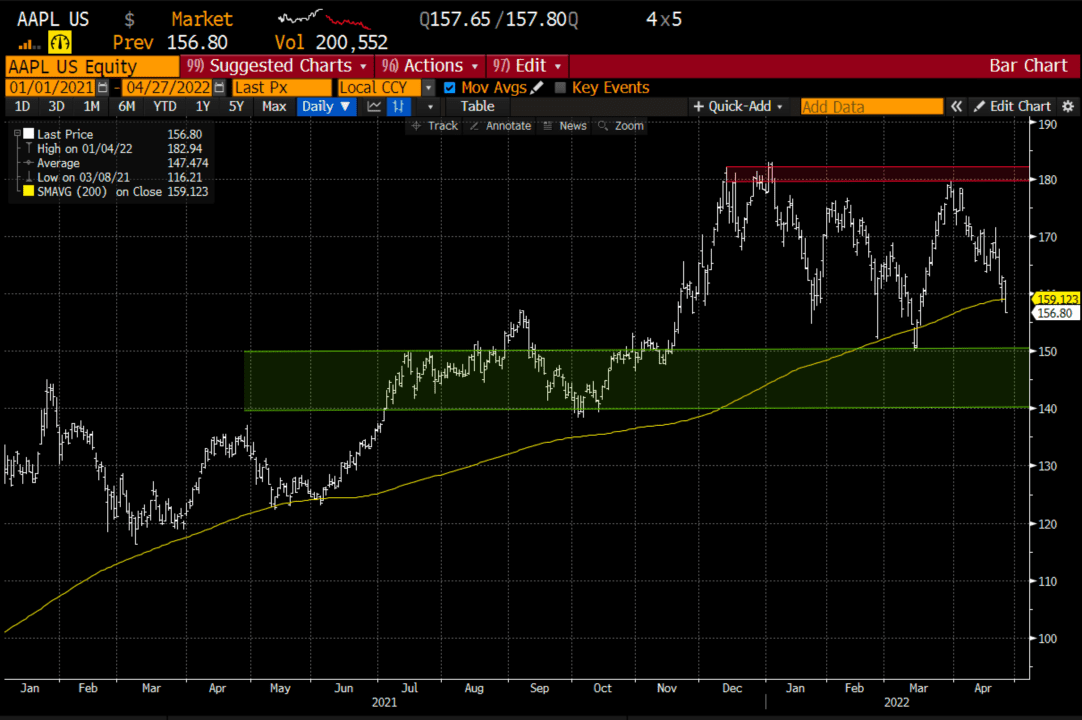 Long-term holders of the stock might consider adding some yield to the stock by selling an out-of-the-money call against their long stock to take in some premium.

Profits of the stock up to 180, capped above that, but really at 181.58, up about 15% at 181.58 (the short call strike plus the premium received). The stockholder can always cover the short call prior to expiration to keep the long stock position intact.

Losses of the stock below current levels, but the $1.58 in premium received acts as a small buffer.

Rationale: options premiums are elevated and taking in a little more than 1% in two months vs an existing long position that you have no intention to sell makes sense as long as you think the stock is not likely to rocket through 180 between now and then. Annualized this sort of yield enhancement strategy could add close to 6% if done every two months.

Lookback #1: On March 23rd when the SPY, the ETF that tracks the S&P 500 was near $449, I detailed a bearish put spread to be used as a potential hedge. Now with the SPY near $420 with a few weeks to expiration it makes sense to reconsider this protection:

This spread is now worth about ~$25, it makes sense to close this as it gets close to the short strike and re-establish a hedge on a bounce, possibly back towards the 200-day moving average. 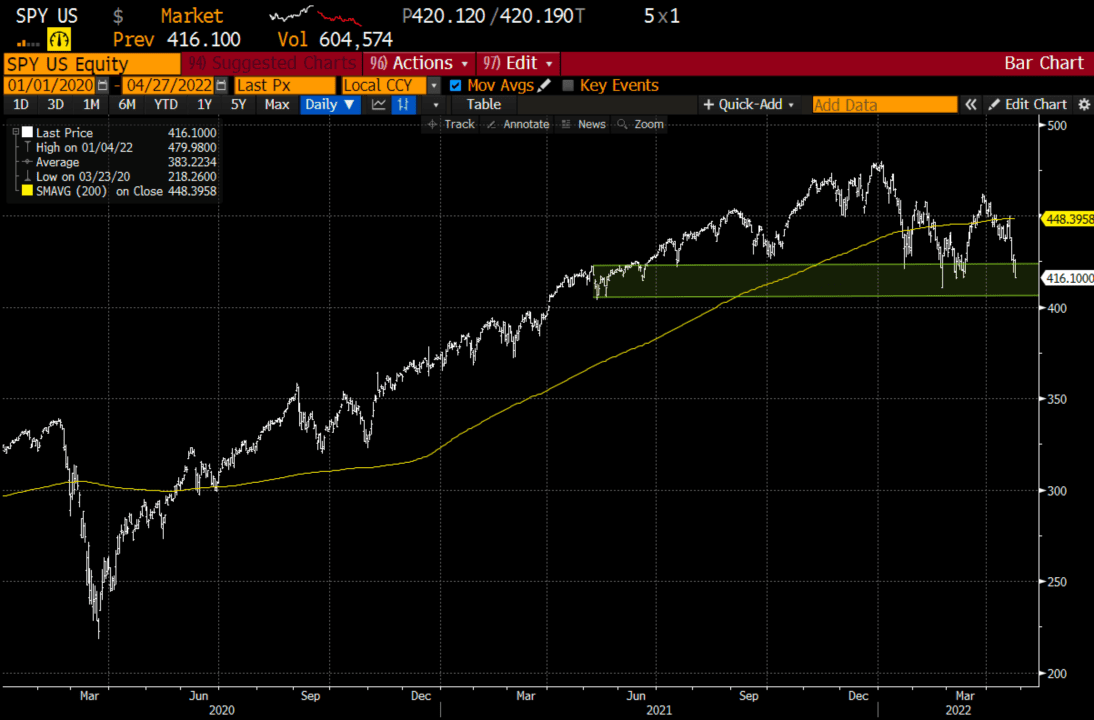 Rationale: rolling the gains out of the prior hedge and allowing for far more time and potential downside makes sense.

Lookback #2: On Apr 13 I detailed a bearish trade idea in XLP, the etf that tracks consumer staples.

Two weeks later the etf is around 79, but the spread is worth about 90 cents, why? well, the prices of options have gone up.

After the trade is a quick loser, it is now backed to unchanged, and with the break below the steep uptrend and approaching the breakout level it would now appear a correction could be in the cards. Stay the course. 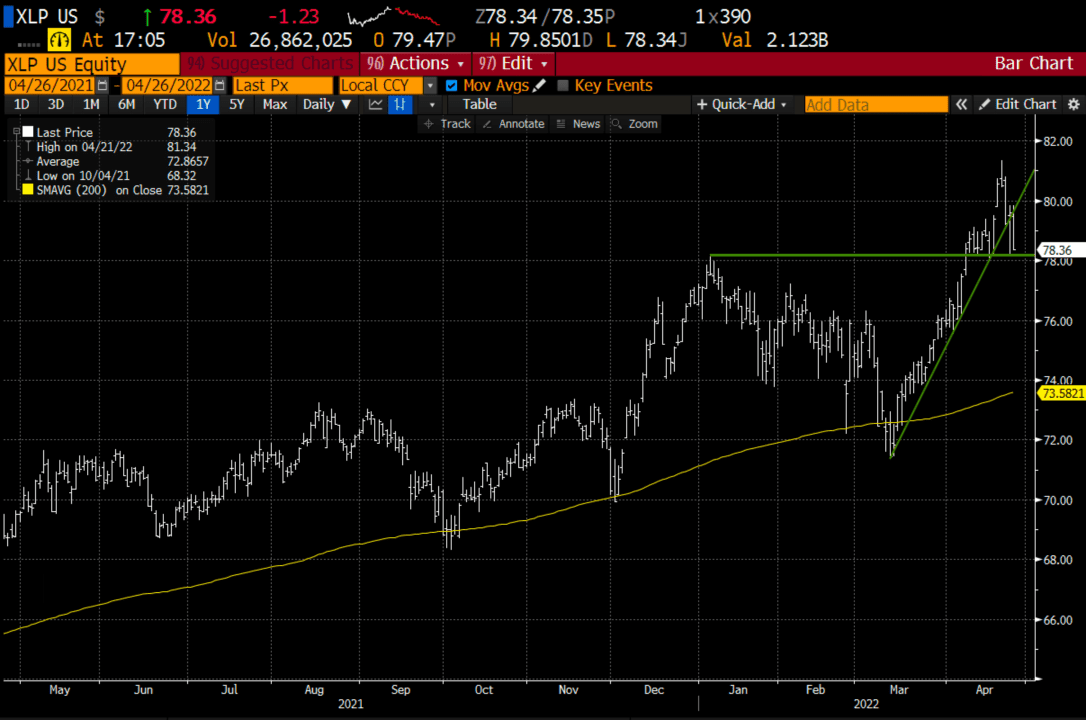