Things got weird in the stock market last month. There are a lot of new entrants to the market, many with their own set of beliefs about how trading and investing should work, I only know the ways in which I have learned over the last nearly 25 years in the markets. I try to learn every day and be adaptable. The job of also opining on markets, stocks, and other risk assets daily on either RiskReversal.com, CNBC, Podcasts, and of course Twitter make it a full-time job of continuing to challenge the core of my own beliefs. One of the main take-aways from the r/WallStreetBets / $GME / Robinhood thing has been a shot at the perceived establishment, the suits, the regulators, the established order. I understand that, and I think I have been very clear, mostly on CNBC and Twitter, that I think that voting with your wallet via trading in toxic situations using leverage is probably not the best way to prove those points. For every Redditor/Robinhoooder who made a fortune in the last month, there will probably be 1000 who lost well more than they can afford to lose. How’s that for “democratizing” investing and the financial services industry? I DO NOT MEAN TO BE GLIB. I have no agenda with my commentary, I am not shilling for Wall Street, what the hell is “Wall Street” anyway? If you think the NY, Chicago, Silicon Valley, and Washington guys are all in bed together, then you are probably right in some way, shape, or form, and that comes down to incentives, but I am not sure the last month’s market activity will change much of that.

For those individuals who think they have been ignored by the financial services industry, or that in some way it is stacked against them, the best way to beat it is to find the lowest cost way to enter, create repeatable behavior with an eye towards capital preservation in challenging times and going out the risk curve a bit when the environment seems amendable. That does not mean gambling on the short-term direction of a stock because a mob on the web who you identify with thinks it is a great idea to stick it to the man.

This leads me to an exchange I had yesterday on Twitter with someone who did not agree with my commentary. I was a little confused with his rationale, but I am happy to hear it, understanding how other market participants view stories or markets should be a useful input to your own analysis.

Will is justifying owning GME at current levels based on a multiple of sales that is not one that has ever deemed to be suitable by the suits on Wall Street. 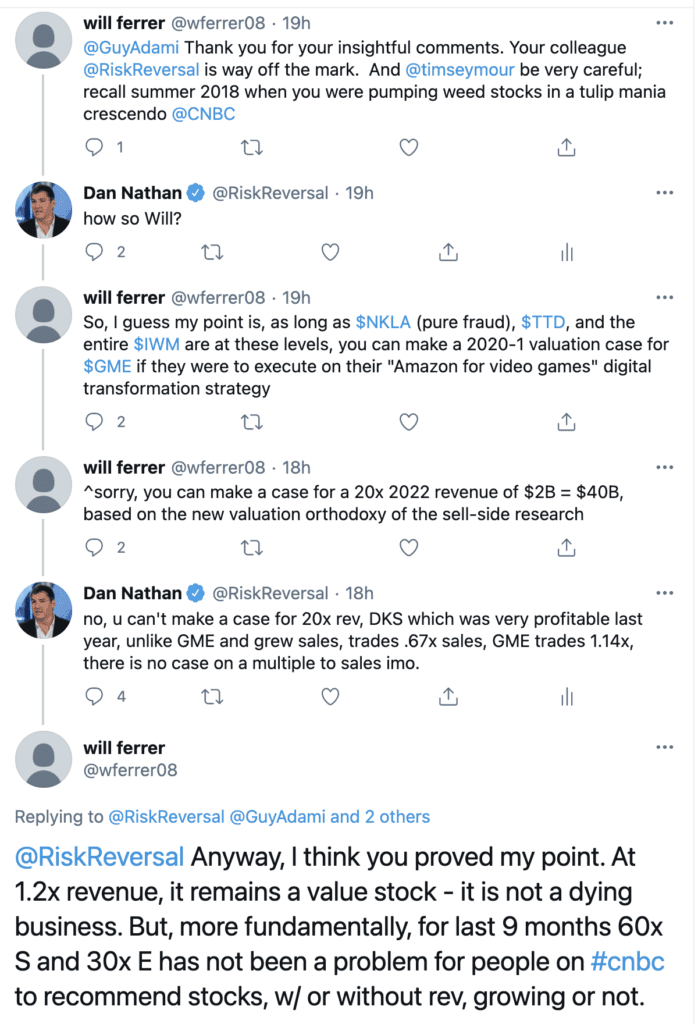 So while we are on companies that trade 60x sales, let’s look at one… C3.AI (AI) which went public at $42 in early December, traded as high as $180 and now sports a $15 billion market cap that places it about 60x expected 2022 sales of $250 million. The company checks all the boxes in this current market environment for the sort of thing that both institutional and retail investors want to invest in, but up 250% from its IPO in two months, trading at a multiple it can never really grow into and one that a strategic would never buy them for, I am not sure how this stock has much more room to the upside.

But if retail investors are playing by new rules and if 20% short interest is more important than 60x price to sales, then this stock could be a rocketship as the kids say. I have no position, and will not have a position in this stock or their options. If I didn’t know anything about the company, its valuation, or much else, I would look at this chart and say that is a really nice uptrend and base and looks poised to test the prior highs and breakout. 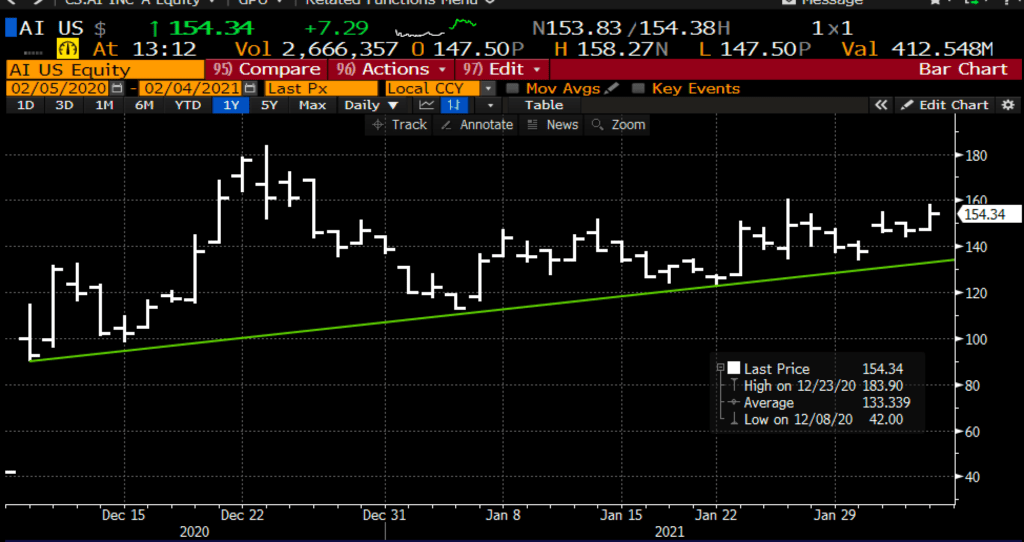 The company will report its first quarterly earnings as a public company in mid-March, the options market is pricing a $44 dollar move in either direction (or about 29%) for AI between now and March expiation. The March 155 straddle (the call premium + the put premium) again is offered at $44, so if you bought the implied move because you thought the stock was either going to rip or crater by March expiration you would need a rally above $189 or a decline below $111 to make money. Alternatively, if you wanted to define your risk to just a call or a put for a directional play, it would cost you $22 or about 14%. To do any of the above, you better have some serious near-term conviction and faith in your newfound metrics – or as Redditors are calling it, Diamond Hands!