In The Money with Fidelity Investments: SPX, USO, PYPL, GLD

Macro: A potential war in Europe is top of mind for investors, and separating the risk of the human toll a war between Ukraine and Russia could bring, the disruption in energy markets would further exacerbate inflation concerns and prolong supply chain disruptions, which will put the U.S. Federal Reserve in a tight spot. The Fed has mapped a course to battle inflation at 40 years highs by putting an end to their pandemic bond-buying response and raising the Fed Funds rate, which they brought to near zero at the start of the pandemic nearly two years ago. The Fed’s normal crisis playbook says to ease monetary policy in times of crisis, but this time is different as inflation is the key concern, which presents a tricky situation for equity investors as the S&P 500 (SPX) nears correction territory, down 10% on the year and the technical set-up increasingly vulnerable. 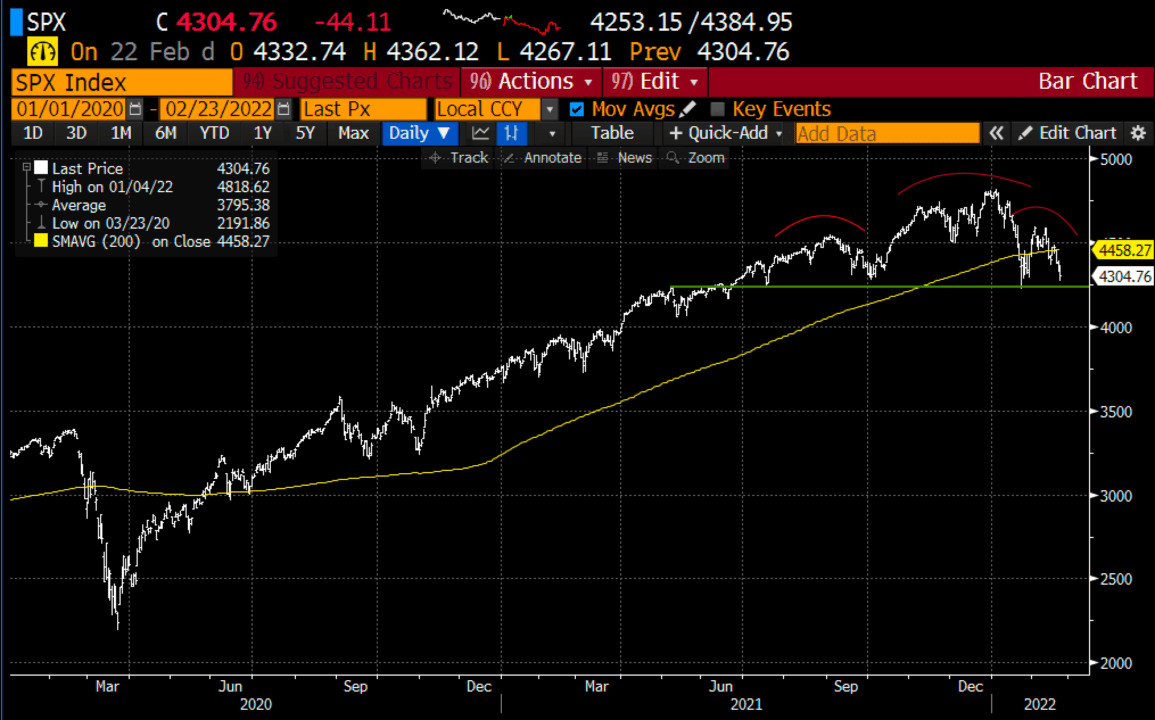 Trade Idea #1: In my 25 years in the business I can’t think of one geopolitical event that was predicted that had a lasting impact on markets. For months pundits have been eyeing this exact scenario that is playing out in Ukraine, even suggesting that Putin will wait until the Olympics are over, which is what he did in 2014 with Crimea. I suspect we see a diplomatic resolution that results in the pullback of oil prices. Crude prices have had their largest 3-month rally in years since the start of December, following the Biden Admin’s release of oil from the Strategic Petroleum Reserve, up 50%, now contending with 1-year technical resistance. 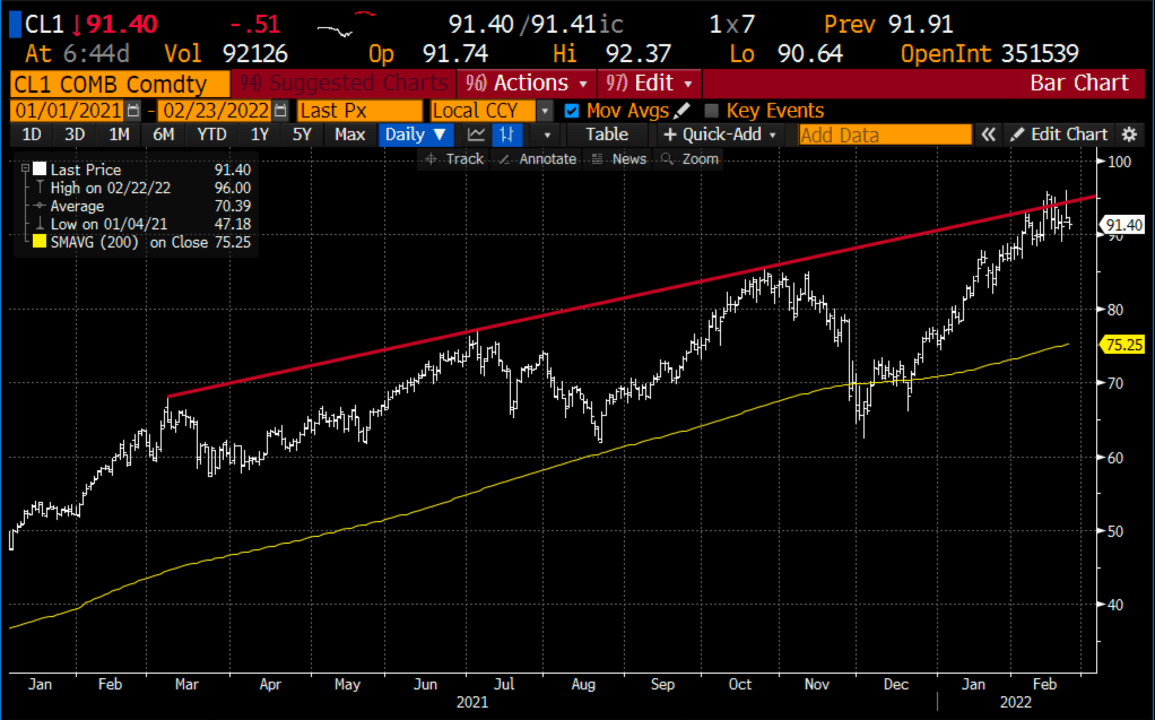 I want to play for a near-term pullback in the price of oil and use the USO ETF to express this view, with defined risk.

Rationale: This trade idea breaks even down 4.5% and has a max gain of 3x the premium at risk or about 9% of the etf price if the commodity is down 13% in a little less than a month.

*The ETF should track the percentage performance of WTI Crude Oil Futures.

Trade Idea #2: Back to the Tricky situation with equities. Some of the most loved stories that lead us out of the pandemic malaise in the stock market have absolutely been destroyed. Shares of PayPal (PYPL) are down 65% from their all-time highs made last summer. 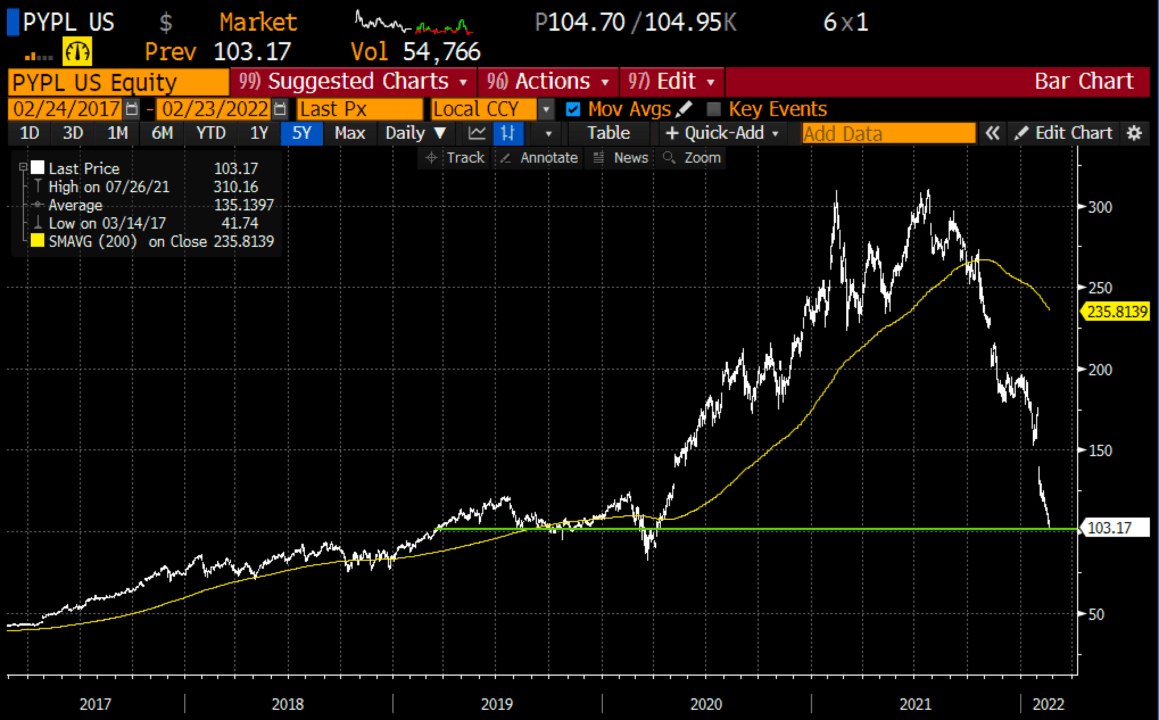 If estimates have come down enough, with consensus calling for flat eps growth this year and only 16% revenue growth with their lowest gross margin ever, then investors might start to look past 2022 and see a stock trading 15x next year’s expected eps growth of 26% on sales growth of 20%.

Rationale: this trade idea risks 4% of the stock price, has a break-even up ~10% with a target of a gap fill back towards $150

Lookback: Back on Jan 13 when GLD, the etf that tracks Gold was around $170 I detailed a bullish trade idea:

Now with GLD approaching the upper strike of the call spread it makes sense to close this trade idea. With the GLD near 178 the call spread can be sold for a little more than $4.