In The Money with Fidelity Investments: NDX, GM, AMAT, XLE

Macro: BIG TECH, the very group that masked tremendous weakness for much of the last six months in high valuation tech, is doing its part to keep the broad market from totally collapsing. Last week Microsoft (MSFT) and Apple (AAPL) posted strong earnings and guidance, and on Tuesday night so did Alphabet (GOOGL). If Amazon (AMZN) is able to guide higher when they report on Thursday after the close, then tech investors in Indices like the Nasdaq Composite or the NDX  will be forced to decide whether the weakness outside of big tech will drag down the Big names with their good news out of the way, or whether the worst is over for high valuation tech, with many stocks having been cut in half. If beaten-up former high-growth tech stocks like ZM, SQ,  and ROKU make new lows soon, I suspect they will drag the handful of relative strength leaders lower.

While the jury is still out on this tech wreck, it might make sense to focus on some stocks that have valuation support in a rising rate environment that would benefit from easing supply chain issues.

Trade Idea #1: Long GM ($54) on their earnings call on Tuesday detailed their plans to further accelerate their EV build. Since making a brief new all-time high at the start of January, the stock pulled back at its lows about 25% and is now down about 20%. The stock has good technical support between $50 and $48 but below that there is risk down to about $40: 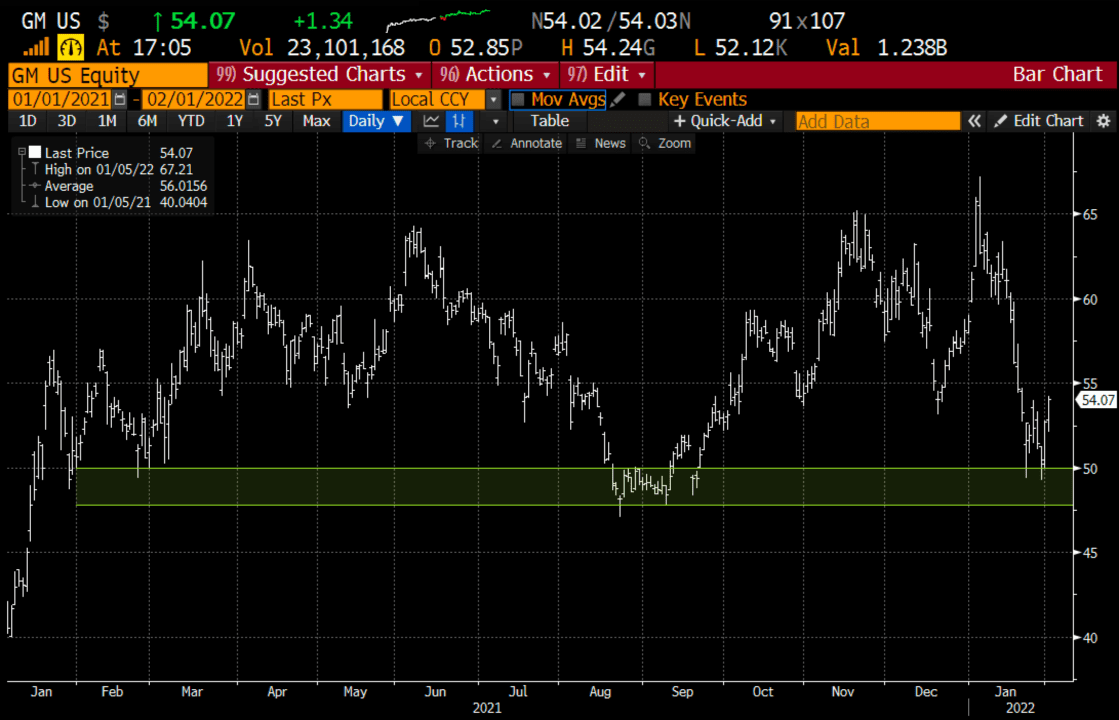 GM trades at about 8x earnings that are expected to decline 3% this year, after a 55% ramp last year, despite sales growth expected to be about 18%. The company has had to deal with supply chain issues impacting their chip supply while also guiding too much higher spending in an effort to expand EV production, which is weighing on earnings. If these fears abate then the stock should work higher in the coming months.

Rationale: this trade idea risks ~4% of the stock price, has a breakeven up ~10%, and has a max potential gain of 4x the premium at risk if the stock is back near its prior all-time highs on April expiration.

Trade Idea #2: Long AMAT ($140) The semi-equipment provider is down 15% from its recent all-time high made last month, finding support last week at a level the stock has bounced from on numerous occasions over the last year: 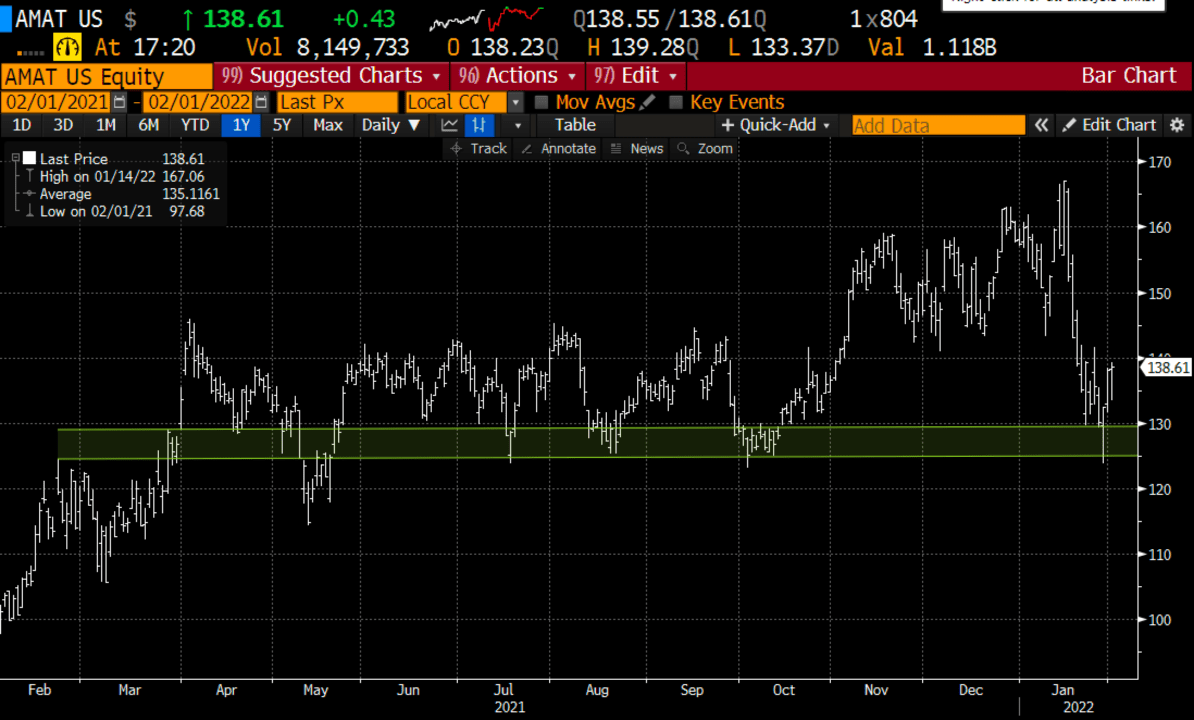 The stock got a boost late last year as many makers of semis indicated that they would be building new fabs to help offset supply chain disruptions. I would also add that the potential for a conflict between China and Taiwan following the Bejing Olympics next week raises the potential for equipment orders for Fabs outside of China and Taiwan. If there is no dust-up, and the global economy re-opens then AMAT is also likely to see increased orders. The stock trades below a market multiple and many of its peers at just 17x, vs expected eps growth of 18% and sales growth of 14%. The company will report the week of Feb expiration, a beat and raise and the stock is likely back above $150.

Lookback:  On Jan 19th i detailed a bearish trade idea on the XLE, the etf that tracks energy stocks:

Well, I have been very wrong on this, with the XLE now $67.25, up about 5% the $8 wide put spread that cost $2 is now worth about $1.30, it makes sense to use a mental stop of 50% of the premium spent and cut loses if the spread is worth about $1. There is still time for this to play out but must plan to exit on a losing trade.