Yesterday, on a new Twitter handle that will be curated by me and Guy Adami, @_TradingSpaces, I posted a chart on Micron (MU). This morning, the company pre-announced a better than expected quarter and I tweeted this:

$MU: positive pre-release was expected, or at least upside when then reported later in the month. Let’s see if it was as good as the whispers… can the stock hold pre-market gains? pic.twitter.com/x8bzFBelQI

The stock has been volatile today: flat, up, down, flat again as I write, I would note in a weak tape for the Nasdaq (currently down 1.5%)… 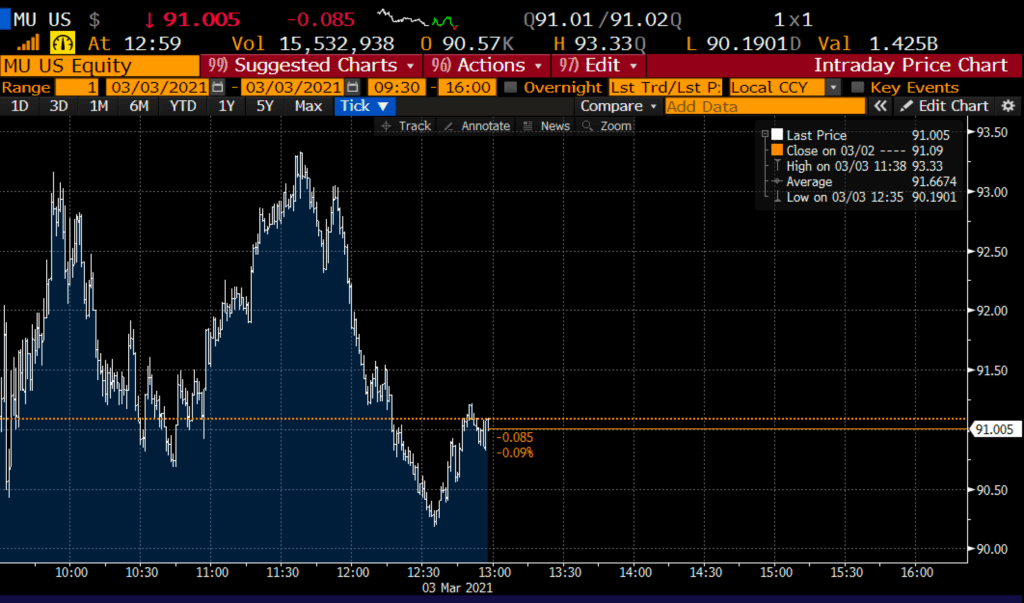 But you get the point. The stock was running into news, while this was a few weeks soon (the company wasn’t expected to report for a few weeks), investors were anticipating this, and it was a sort of “buy the rumor, sell the news.”

This played out the last couple days in Zoom (ZM), following their blowout earnings and guidance, also as tweeted:

$ZM: priced to perfection? as good as it gets? use whatever cliche you want… but 369% yoy sales growth only means decelerating growth going forward, at 33x sales I am not sure who the incremental buyer is on frontloaded FY guide. pic.twitter.com/JWfDEt85L9

The stock has barely seen an uptick since yesterday’s open. 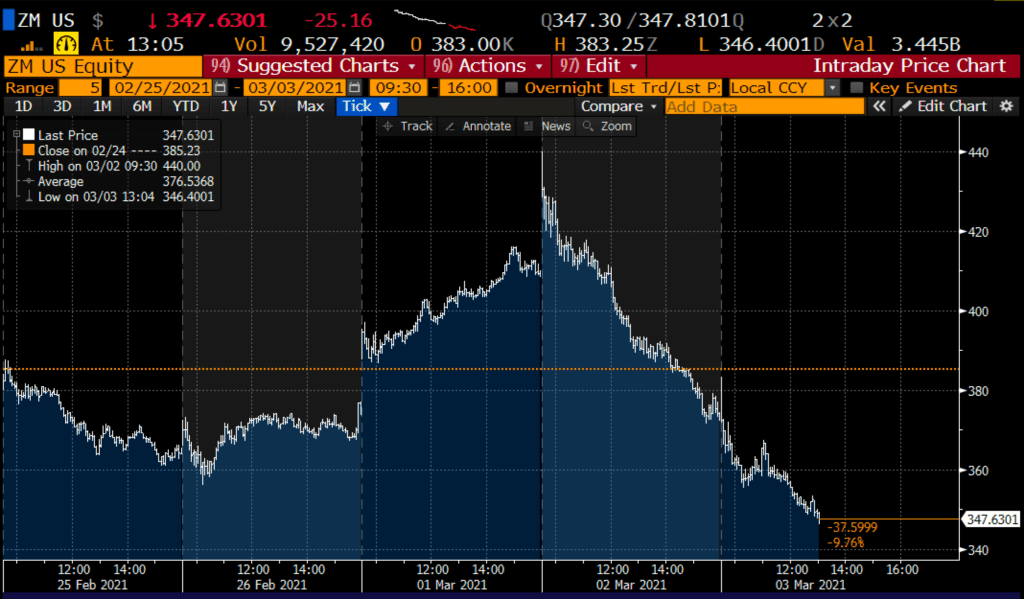 My friend @WallStCynic had something similar to say following their results:

(2) My point being that if your concern is a slowing second derivative growth function for a stock at 35x revenues, that concern is still valid post this “beat and raise” quarter. $ZM

This brings me to my last tweet, from Liz Anne Sonders of Schwab this morning on earnings reactions…

Companies have been beating earnings estimates but investors haven’t been excited … shares of S&P 500 companies that have beaten estimates have, on average, traded flat as per @FactSet@FT
[Past performance is no guarantee of future results] pic.twitter.com/0XABHa2fNE

The fly in the ointment might be interest rates, the fairly quick rise in the ten-year U.S. Treasury Yield from 1% to 1.5% in the last few weeks, which has caused equity investors to rethink valuations, but also consider the potential headwind to growth we might see in the back half of this year despite the optimism of a reopening trade. The bond market is telling us that they are NOT going to wait for the Fed to change their stance on inflation, essentially getting more hawkish. The last time the Fed was in tightening mode when the U.S. Ten Year Yield got above 3%, the S&P 500 dropped 20% in a straight line in Q4 2018. This is a big reason why mega-cap tech stocks have been lagging of late, while more cyclical groups that benefit from rising prices and interest rates have done well, notably energy, materials and banks.

As we get towards the end of Q1 in the coming weeks and start to focus on Q1 earnings, which will get kicked off the week of April 12th with almost every major bank reporting, we might have witnessed a BUY the reopening rumor and SELL the reopening news.

I just got done taping my weekly In The Money segment for Fidelity Investments, which should drop after the close. Look for a contrarian play to fade bank stocks into Q1 results and bullish trade idea on a beaten up pharma name.