Today I joined Tom Lee of Fundstrat for an FSInsights webinar. Click below to watch and see my notes below the video: 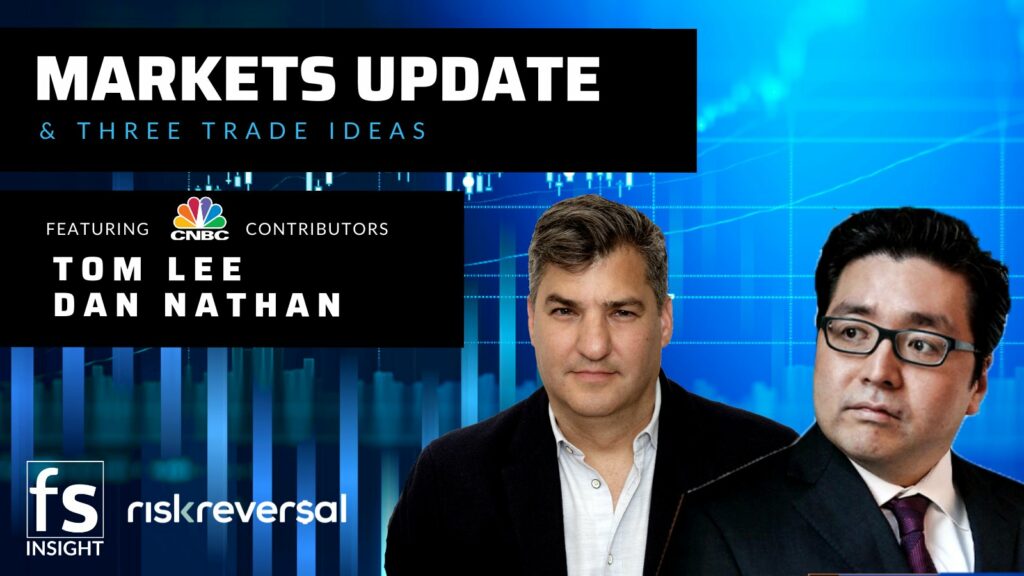 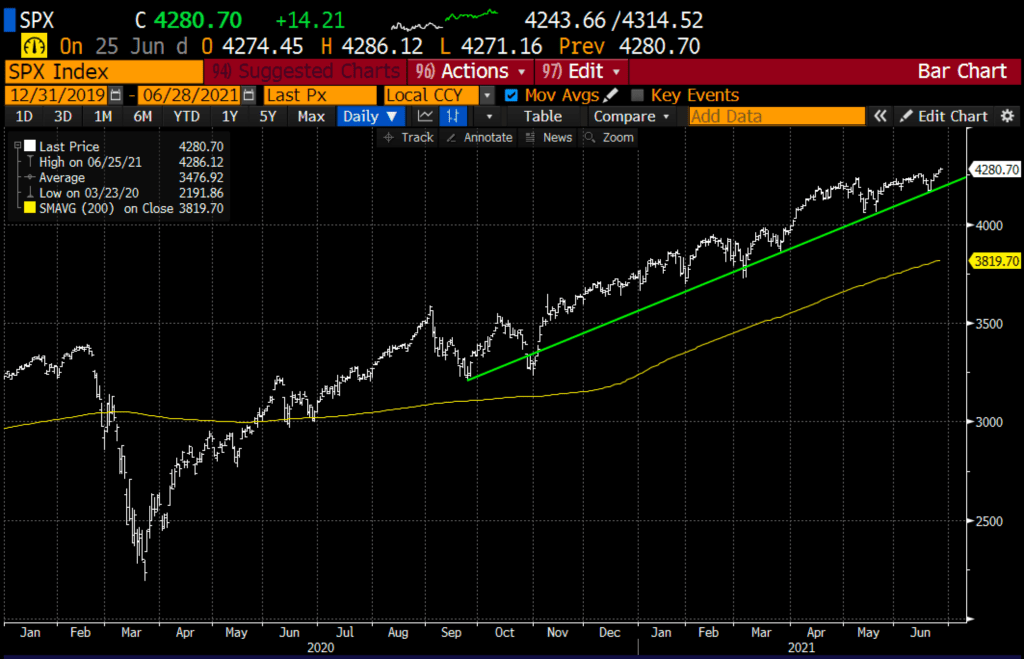 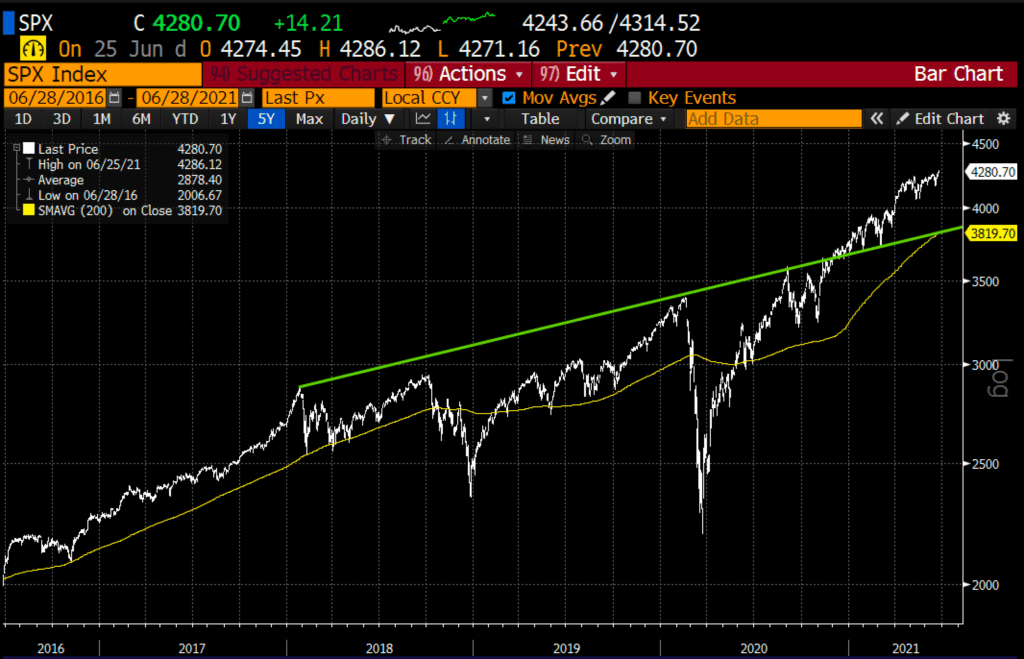 SPX 30-day at the money Implied Volatility (the price of options) 5-year chart, very near its pre-pandemic crash levels. 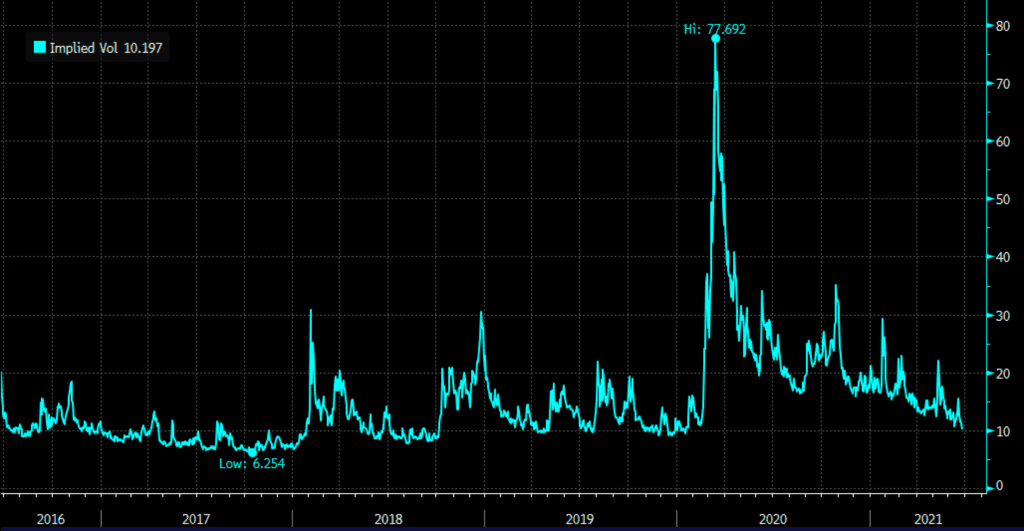 What is the options market saying about near-term risk?

With the SPX at 4280, the July 30th, one month out (which catches 1/3 of S&P 500 Q2 earnings and a Fed meeting) at the money straddle, (the call premium + the put premium) is offered at $120. If your bought that, and thus the implied movement between now and July 30th you would need a rally above 4400 or a decline below 4160 to make money, or a little less than 3%. That is what we would call, cheap as chips in the options pits.

SO if you were looking for near the money protection over the next month, a at the money put would cost only $60, or less than 1.5% of the index, and if you were looking to lever up and define your risk playing for a runaway breakout that would cost you only $60, or less than 1.5% for one month. Seems fairly cheap considering how much we are up in front of near-term catalysts, recent volatility in the U.S. Dollar, and 10-year U.S. Treasury yields, which might also signal some complacency.

While we are on cheap vol, and weaker than expected rates of late… it is worth taking a look at the 10-year U.S. Treasury Yield chart which Tom has highlighted in a downtrend since March when the consensus was clearly 2% in 2021!  At this point, test a slightly more hawkish tone by the Fed, a test of its 200-day moving average near 1.20% feels more likely than new 52-week highs near 1.80%. 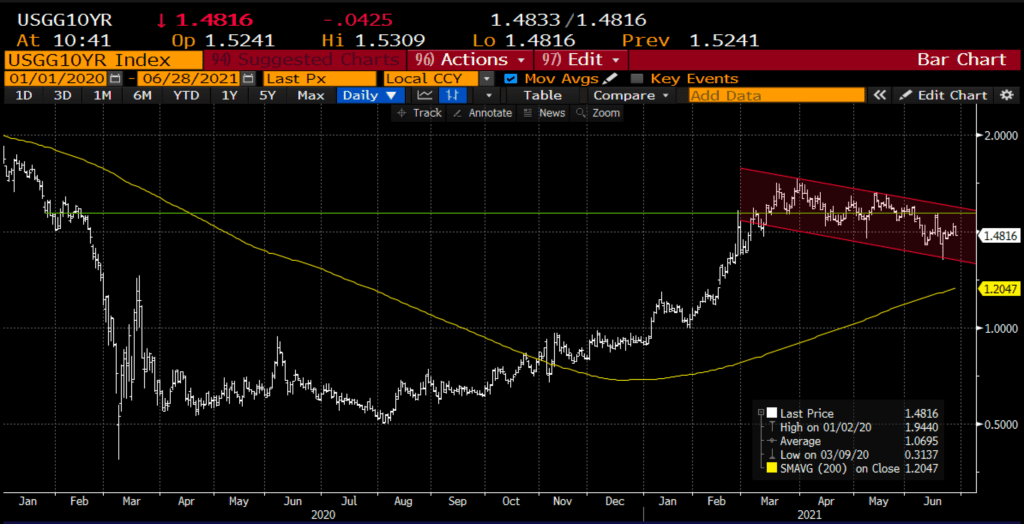 The TLT, the iShares 20-year U.S. Treasury ETF which trades inverse to yields just broke the downtrend from its August 2020 highs. A move in the 10-year back towards 1.2% would likely have the TLT slicing through its 200-day moving average just below $150. 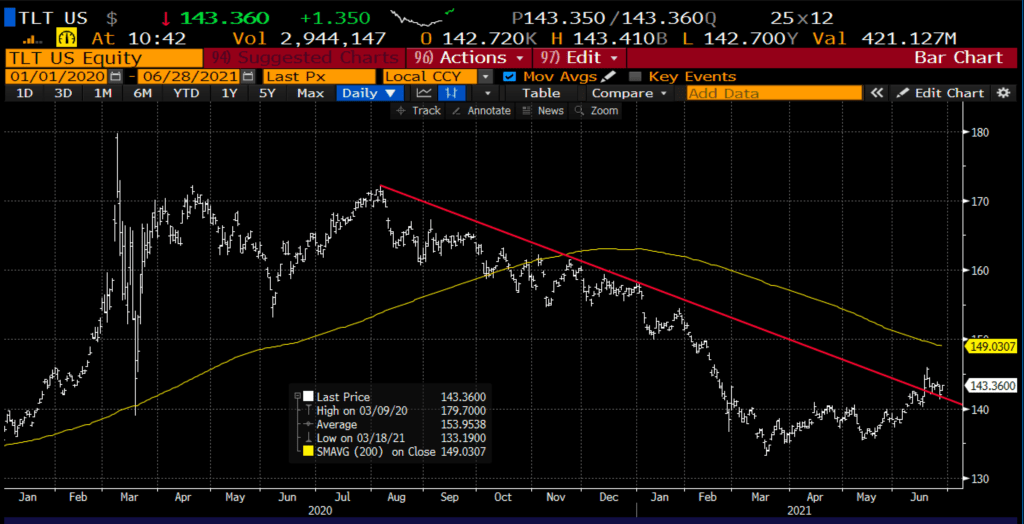 It is notable that implied volatility on the long-dated U.S. Treasury bond etf is greater than that of the S&P 500! 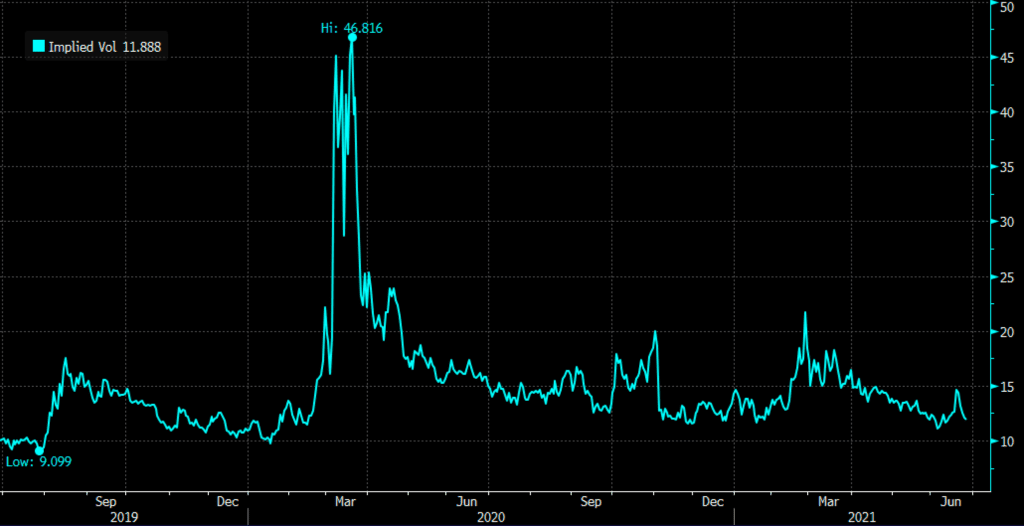 If you were of the mindset that continued weak jobs data could overshadow hot reads on inflation over the course of the summer, thus giving the Fed to remain Dovish in their commentary at their July meeting and low expectations for Jackson Hole, then yields likely head lower, TLT tests $150.

Into the Fed’s meeting two weeks ago Tom made a fairly prescient call, downgrading Banks and upgrading Tech stocks. That was a heck of a call as investors shot banks first and ask questions later immediately after the Fed meeting. They have come back, but the move into large-cap tech has been a big market theme over the last couple of weeks. 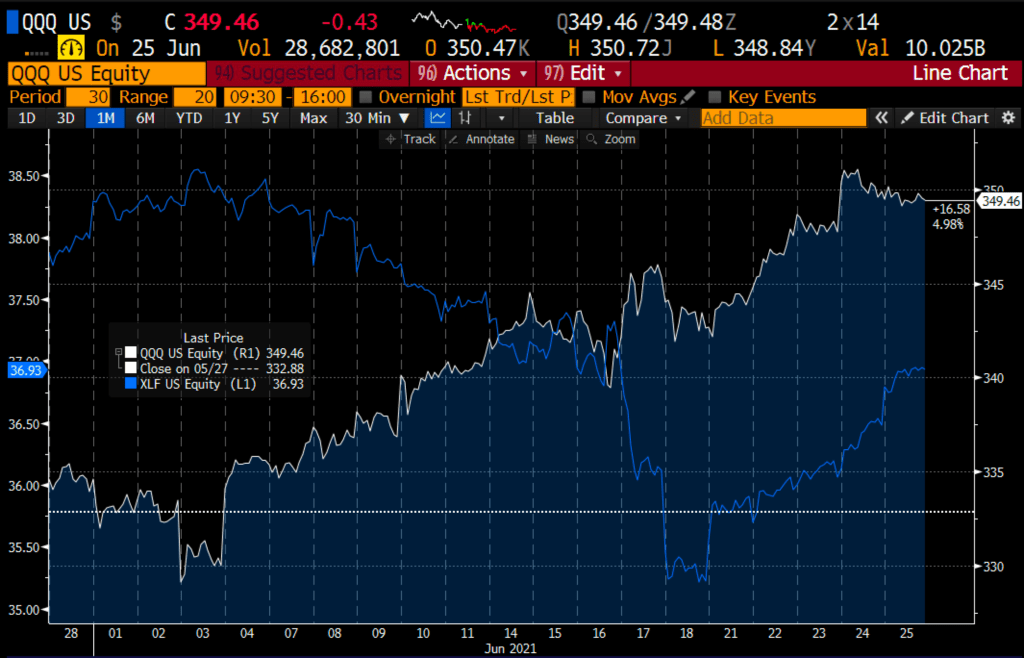 Is it defensive, a move back into recurring revenue, big balance sheets, mega-moats, and basically monopolies? And despite this week’s announcements of cash return by the banks and some more loan loss releases when they report next month, might we see a massive deceleration in their trading and banking.

As for Tech, the higher they run into Q2 results the harder it will be for them to go up after, might we see some digestion in the weeks after results?

For those who have portfolios that are heavily levered to the big 5 (I call them F’MAGA; FB, MSFT, AAPL, GOOGL & AMZN, which make up 40% of the weight of the NDX, Nasdaq 100, or the QQQ the etf that tracks it), they might consider some near-term tactical downside protection. The chart looks like a thing of beauty, a well-defined uptrend with a series of higher highs and higher lows, now some 11% above its 200-day moving average. 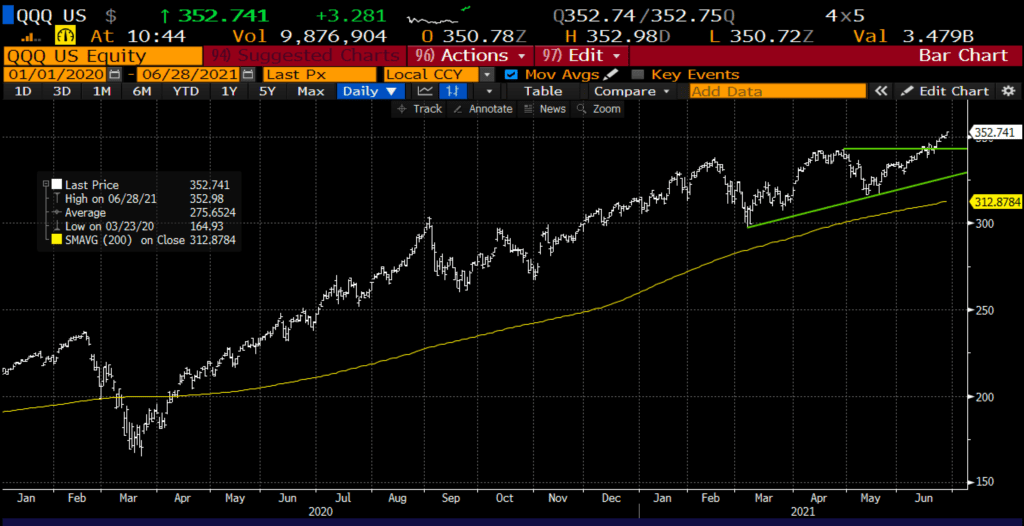 The big Kahuna, Bitcoin was down about 55% at its lows last week from its all-time highs made in mid-April. $30k to $40k appears to be an important range on the chart, which just saw a “death cross” the 50-day moving below its 200-day moving average: 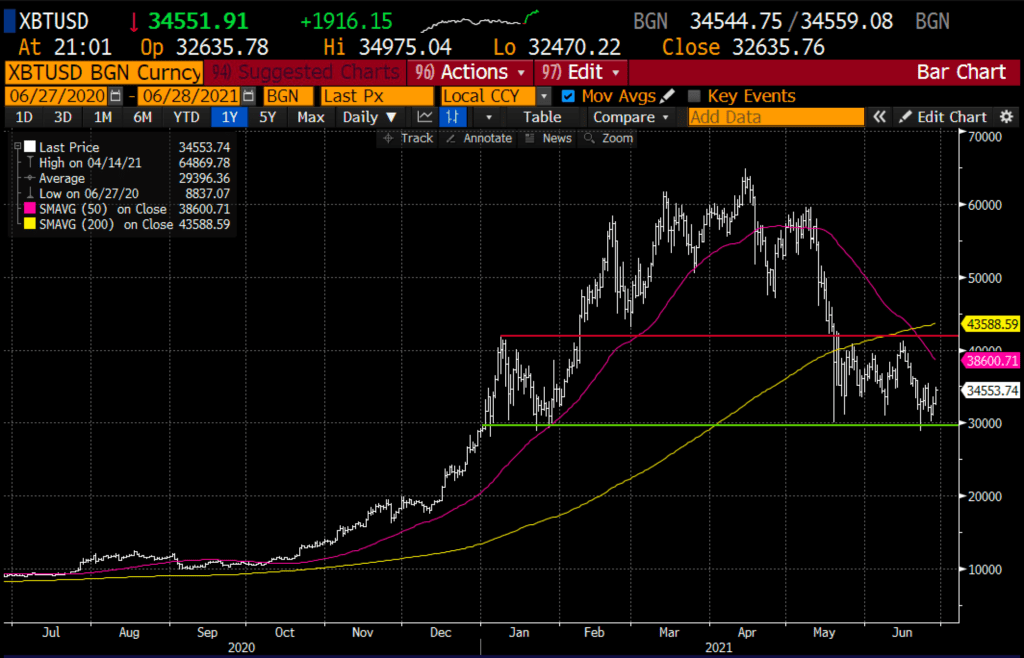 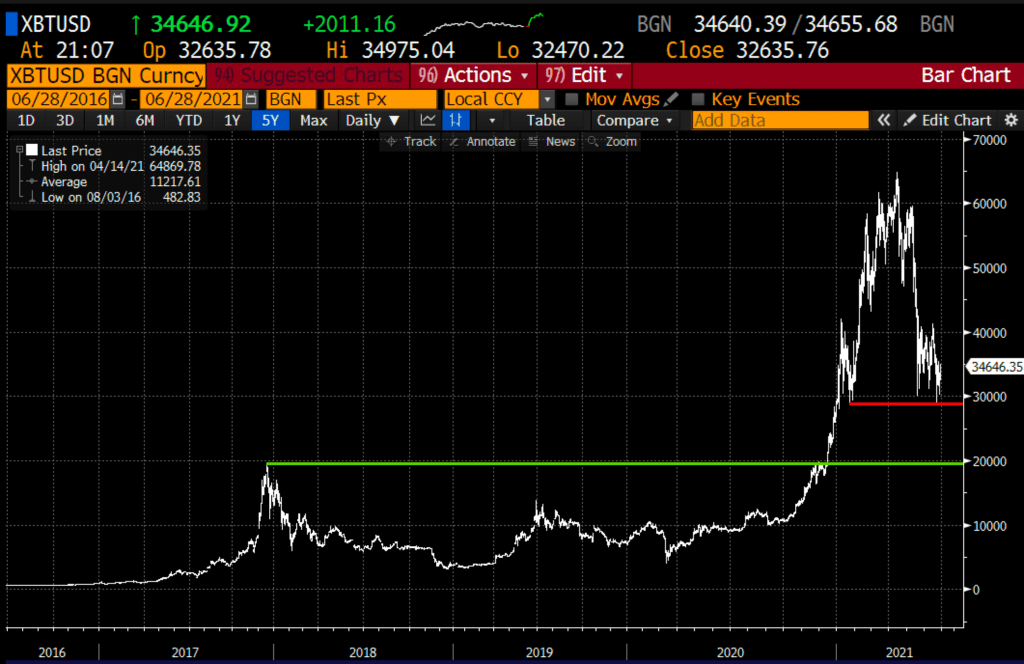 The day Bitcoin topped wasn’t just any day in the markets, it was the day of Coinbase’s hotly-anticipated direct listing IPO that had a reference price of $250 and saw its stock trade as high as $430. Last week at its lows it was down about 50% from its April 14th highs. Coinbase has tracked BTC’s performance since its IPO.

For those who are attracted to the crypto space, but can’t stomach the volatility, as Tom as mentioned of late in his notes, sees ways in the stock market that offers exposure to crypto, but in some instances without some of the idiosyncratic risk of an individual crypto asset.

With just two and half months of trading data for COIN there is not much to go on, other than what might be a psychologically important direct listing reference price of $250: 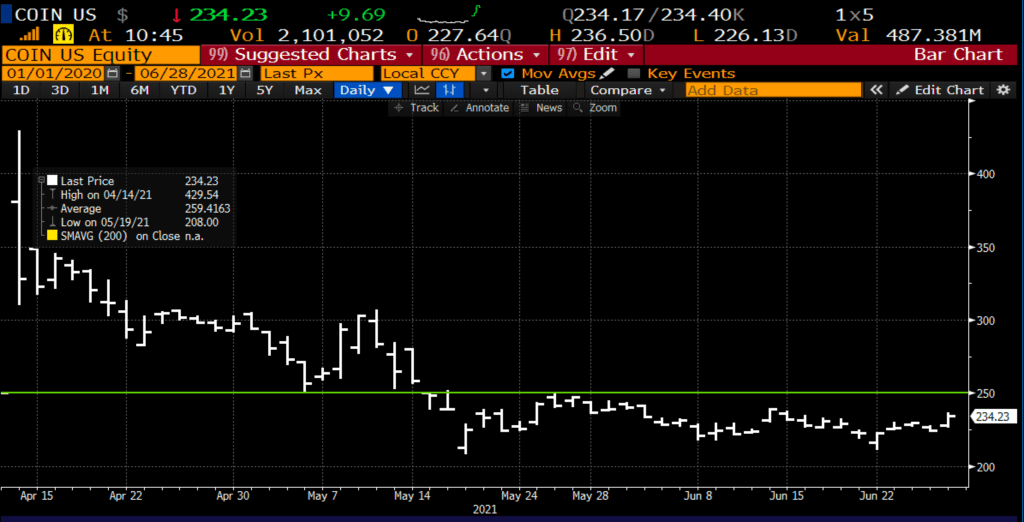 COIN is expected to report its 2nd quarter as a publicly-traded company in mid-July if the company can put up good results and guidance which I expect it should given the vol in crypto markets since its last result, and Bitcoin, in particular, can find some support, then I suspect we COIN back of $250 on its way to $300 over the course of the summer.

Rationale: this trade idea breaks even up 8%, and risks less than 2% of the stock price, it’s a bit of a lotto ticket, but if Bitcoin has bottomed and moves higher, so should COIN, and if the company’s earnings do fall in July expiration and they beat and raise I suspect the stock is above 250 post results.