Markets feel funky. I have been saying that for a while now, and while I am generally fairly optimistic about the back half of the year as we see the full impact of the 3rd round of fiscal stimulus since the start of the pandemic and a population reaching herd immunity, the euphoric behavior in most risk assets, the disregard of the risk part, and the FOMO about the asset is likely to strike a different tone sometime very soon. In the meantime, stocks levitate at all-time highs, despite interest rates and commodities rising, which should usually serve as headwinds to equity valuations as a competition for return and greater than expected input costs, which could weigh on margins.

At times like these, I find it interesting to see divergences. For instance, the Nasdaq 100 (NDX) already up ~7% on the year at all-time highs, while the largest stock in the market, Apple (AAPL), which makes up 11.6% of the weight of the index of 100 stocks, is looking just a tad tired after a very long haul over the last year up 150% from its March 2020 lows.

AAPL at 11.65% of the NDX is basically unchanged in the year, down about 8% from its all-time high made last month, today breaching the uptrend that has been in place since early November. The chart below shows the stock below the recent breakout level and what might be a massive air pocket below the uptrend downturns the Nov low which also happens to be very near its 200-day moving average near $111: 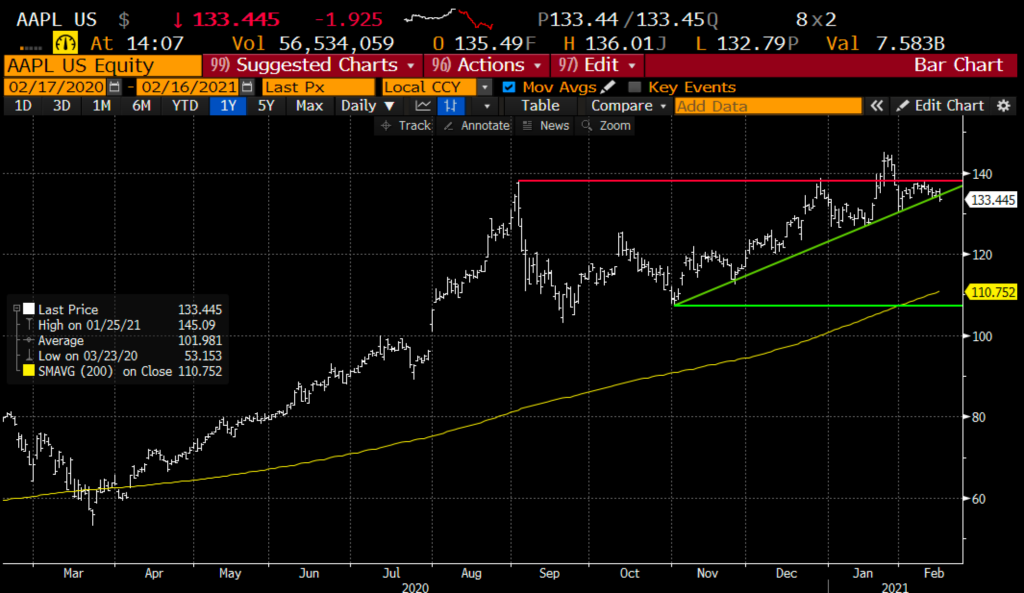 AAPL longs who think the Q1 results might be as good as it gets for a while as the company sees a normal season lull following new iPhone launches, but don’t want to sell, may find the stock’s failure to keep pace with the market and that the weak technical setup might warrant a hedge. Consider collars, selling an out of the money call, and using the proceeds of the sale to finance the purchase of an out of the money put, for instance:

Profits of the stock up to 150, stock called away at 150 (long holder could always buy to cover short call on expiration or prior to ensure the long stock position stays intact), so up to 16.50 in gains (less the 75 cents)