Like many consumer discretionary stocks, Starbucks (SBUX) broke out to a new 52-week an all-time high on Monday, Nov 9th following the news about the Pfizer (PFE) coronavirus vaccine. Since then the stock has been consolidating between the mid to highs $90s and ~$108. The one year chart below shows Friday’s high matching nearly to the penny its early Jan all-time high and the stock’s bounce last week from the uptrend that has been in place since its March lows. Technical support should come again at the uptrend just below $100, but $90 which was the Feb 2020 high, and obviously, the breakout level from Nov will soon converge with the stock’s 200-day moving average and serving as healthy long-term support: 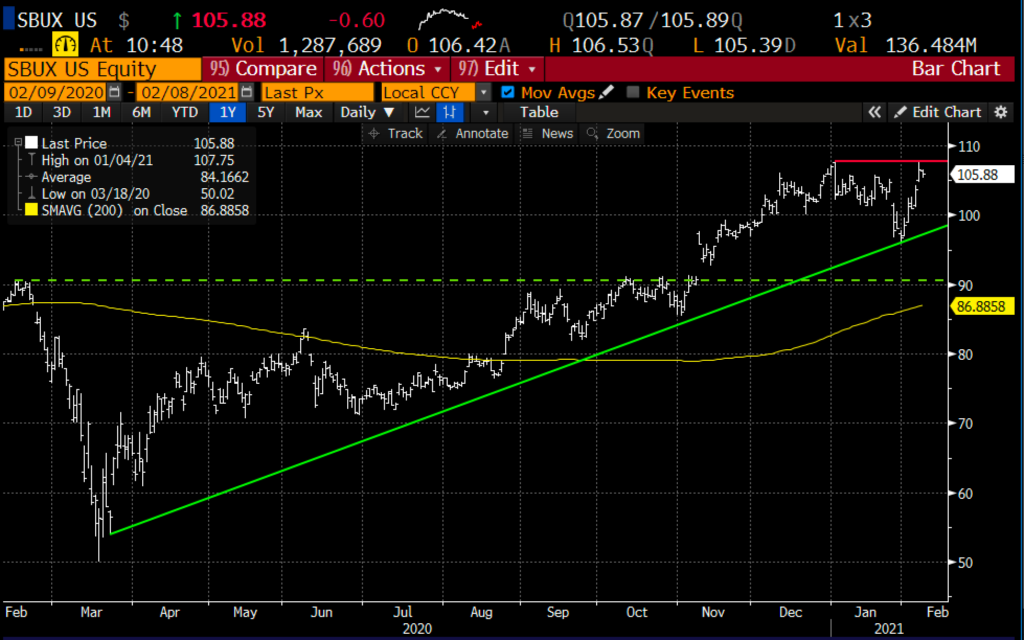 The fact that the S&P 500 (SPX) has been seemingly making new highs daily for the last two months, and that SBUX’s decline from its Jan high doubled that of the SPX’s and that it has been rejected at resistance suggests to me that the stock could be prone for another correction, especially if the broad market were to correct.

It is worth noting that short-dated options prices have fallen below that of realized vol. The chart below shows 30-day at the money implied volatility at about 26% (blue line), down from about 35% in the last few weeks, while 30-day at the money realized volatility (white line, how much the stock has been moving) remains elevated near 33%, suggesting options prices look cheap for those looking to express directional views: 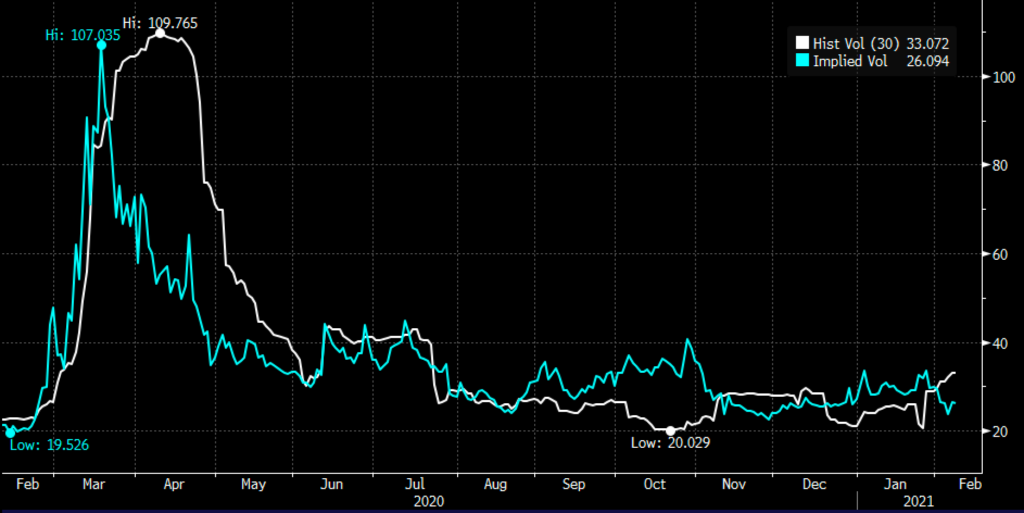 The next identifiable catalyst for the stock will be their fiscal Q2 earnings on April 27th. In the meantime, any positive movement on further fiscal stimulus and vaccination rollout should benefit consumer discretionary companies like SBUX. On the flip side, if the stimulus were to be much smaller than the Biden admin is hoping to put through via budget reconciliation and the virus continues to surge extending global lockdowns and the vaccine rollout falters and/or new strains are found to be impervious, then consumer discretionary stocks like SBUX could struggle.

I would add one more point, investors can’t come up with too many reasons why the market might correct. At some point, interest rates creeping up (the 10-yr U.S. Treasury yield is at 1.16%) might cause investors to rethink valuations.

If I were inclined to play for a pull-back in SBUX back to the uptrend and possibly as low as the breakout level and its 200-day moving average over the next couple of months, I might consider the following put spreading April expiration:

Rationale: this trade idea risks less than 4% of the stock price, has a break-even down of about 4.5%, and has a max gain of 15% if the stock is down 20% in a little more than two months.