Macro: Last week saw investors’ confidence briefly shaken by some fairly speculative activity in a small number of stocks that for a moment felt like could have ripple effects across our stock market. As it appeared this speculative fervor was set to subside, investors rushed back into large-cap tech stocks, banks, and industrials. But we are not out of the woods yet… ISM manufacturing this week was disappointing and we could see a retraction in economic activity as employment gains have waned… so near term bearish on the economic outlook, closer we get to mid-year then stocks start to discount any continued virus hiccups.

As for large-cap tech, MSFT, AAPL, GOOGL & AMZN, more than $7 trillion in market cap (37% of the weight of the QQQ & 20% of the SPY), they crushed earnings… stocks having a hard time breaking out to new highs despite the QQQ very near all-time highs, some might say that is bullish as rally broadening out beyond leaders, I see an air pocket back to $280: 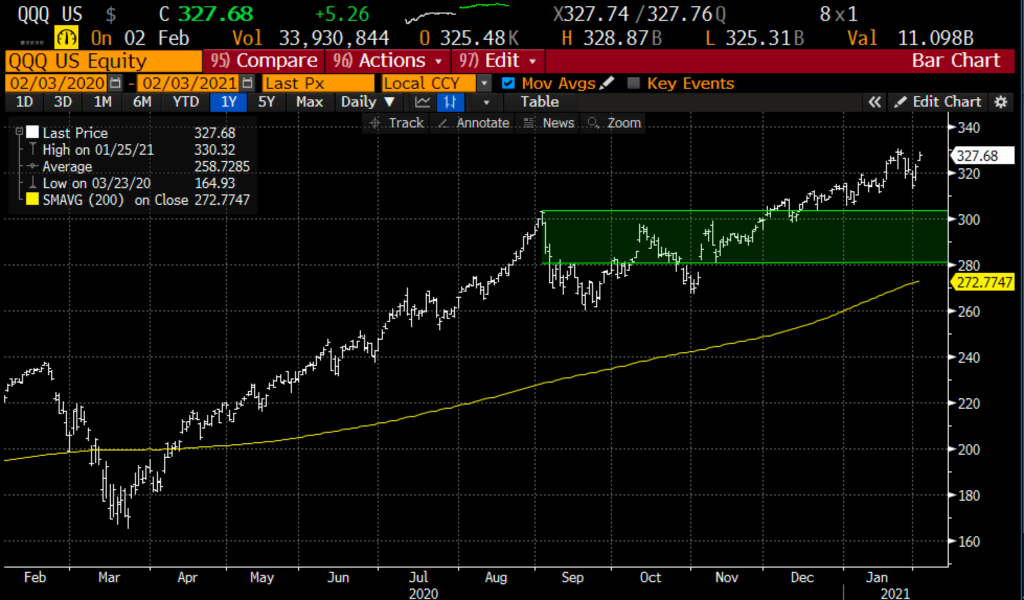 AMZN 3rd largest component in SPY & QQQ reported Blowout numbers last night, the options market was implying about a 5% one day move today…. stock is basically unchanged…. Their Founder CEO Jeff Bezos announced that he will be stepping down as CEO in Q3 but remain as an executive chairman…. between now and July expiration in the start of Q3 the options market is implying about a $600 move in either direction or about 17.5%. The announcement did no change any analyst’s minds on the stock with 54 BUY ratings, 1 Hold, and NO SELLS.

The chart is constructive! 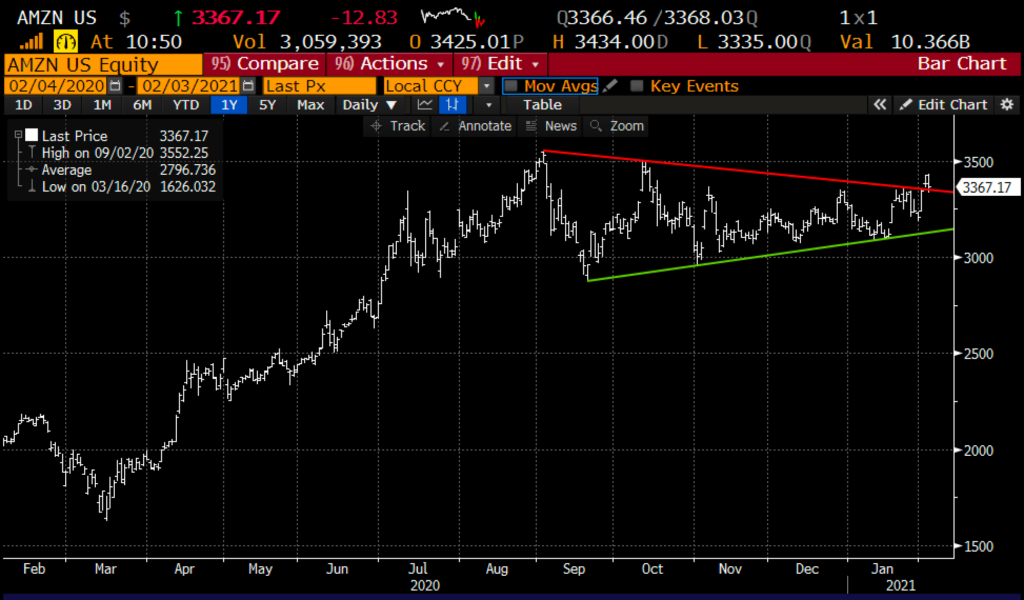 Last week the company put up a solid quarter, showing strong relative performance to MA in terms of gross purchase volume, but guidance lacked visibility relating to the uncertainty of the Pandemic. Positive catalysts include improvement and acceleration in the rollout of the c19 vaccination, better weather in the spring to tamp down cases that could open more businesses, increased spending on leisure and travel, and of course the expectations for a large stimulus bill to pass in the coming weeks.

The stock has spent the better part of the last 6 months trading between $195 and $220 with obvious technical resistance at its all-time high made on Dec 30th at $220, while also finding support near its 200-day moving average at $195: 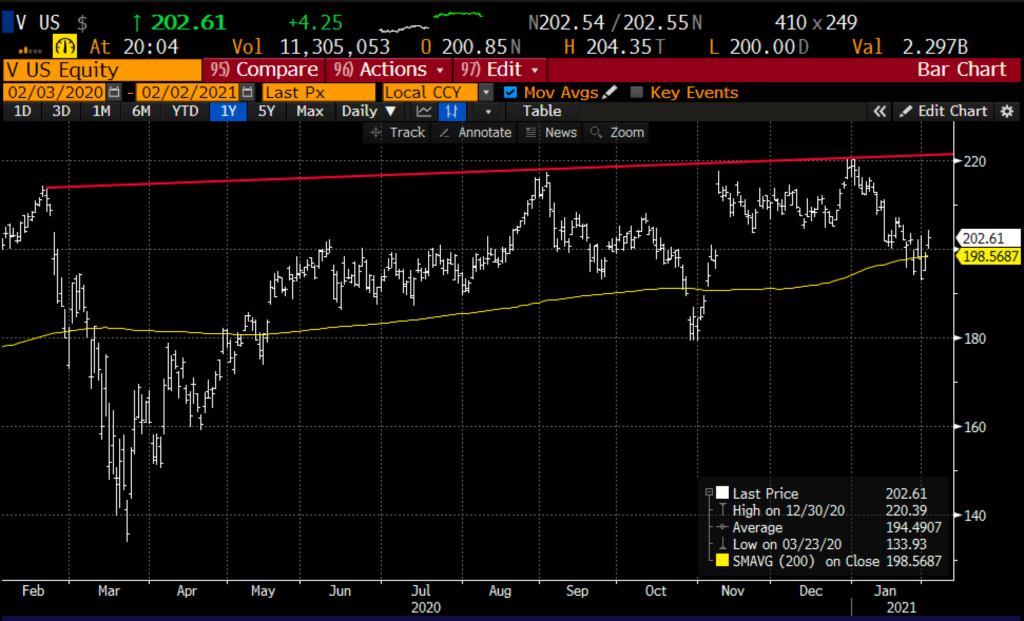 Lookback: On Dec 23rd when UPS was $175 I detailed a bearish trade idea in the stock:

Now with the stock $157.50 the spread is worth about $18… the stock bounced a little yesterday after decent earnings but frankly given how much the stock has sold off from its recent highs we want to keep a close eye on this one… I still like playing for a break of the $160 support but let’s not let a nice winner turn into a loser.

The stock has technical resistance at $165 at its converging 50 and 100 day moving averages and support down near its 200-day at 143 which is also its July gap: 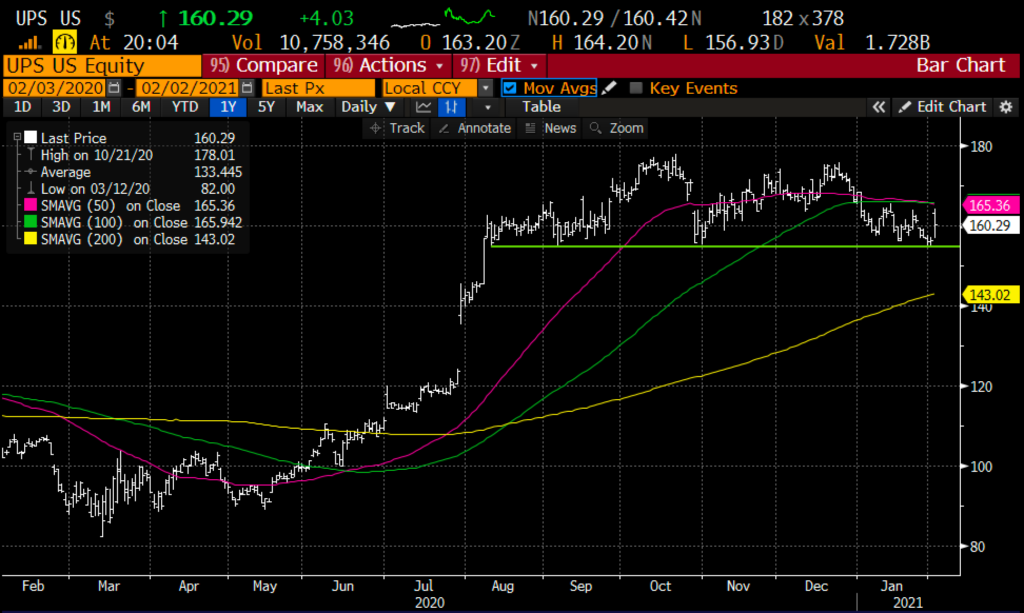