Over the weekend it was reported that the two largest integrated oil companies in the U.S., Exxon (XOM) and Chevron (CVX) discussed a merger in the last year, per WSJ:

The chief executives spoke about combining the oil giants after the pandemic shook the world last year, according to people familiar with the talks, testing the waters for what could be one of the largest corporate mergers ever.

Chevron Chief Executive Mike Wirth and Exxon CEO Darren Woods discussed a merger following the outbreak of the new coronavirus, which decimated oil and gas demand and put enormous financial strain on both companies, the people said. The discussions were described as preliminary and aren’t ongoing but could come back in the future, the people said.

Such a deal would reunite the two largest descendants of John D. Rockefeller’s Standard Oil monopoly, which was broken up by U.S. regulators in 1911, and reshape the oil industry.

A combined company’s market value could top $350 billion. Exxon has a market value of $190 billion, while Chevron’s is $164 billion. Together, they would likely form the world’s second largest oil company by market capitalization and production, producing about 7 million barrels of oil and gas a day, based on pre-pandemic levels, second only in both measures to Saudi Aramco.

But a merger of the two largest American oil companies could encounter regulatory and antitrust challenges under the Biden administration. President Biden has said climate change is one of the biggest crises the country faces. In October, he said he would push the country to “transition away from the oil industry.” He hasn’t been as vocal about antitrust matters, and the administration has yet to nominate the Justice Department’s head of that division.

These two companies make up 25% of the weight of the XLE, the S&P Energy Select etf. I think it is safe to say that this discussion was not born out of a position of strength.

XOM’s chart is starting to look a tad tired, today breaching the uptrend that has been in place since its late October lows that yielded a 65% gain to the stock’s recent highs last month. 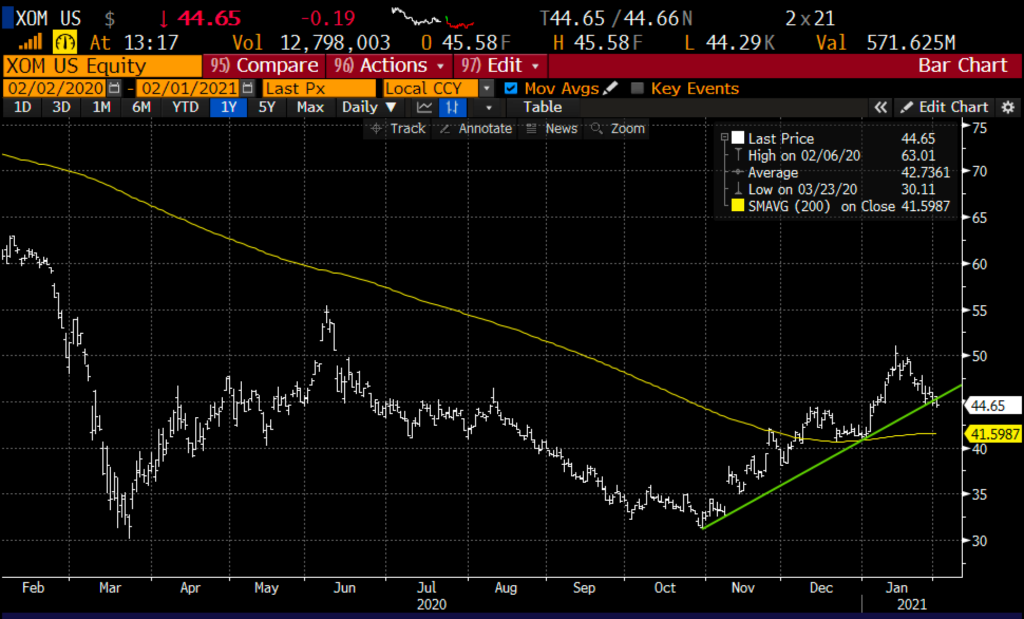 XOM will report Q4 results tomorrow morning. The options market is implying about a 4.5% move between now and Friday’s close, or about $2 in either direction. Shares of CVX declined 4% on Friday following its Q4 report.

Short-dated options prices have ticked up in the last week as the VIX has gone from 20 to nearly 40 and now back below 30, but if we were on the precipice of a growth scare, then 45 vol may prove to be attractive for those looking to express defined risk directional views in the name:

I would also add that this morning’s ISM manufacturing number, while still good nearing the multiyear highs, and coming way back from its 2020 depths in the low 40s is starting to miss expectations, which could be a leading indicator for energy demand as much of the world is locking down to mitigate the spread of the coronavirus as the rollout of the vaccine in many industrialized companies like the U.S. is not going well, pushing out hopes of pre-pandemic highs in 2021 (despite the CBO’s projections today): 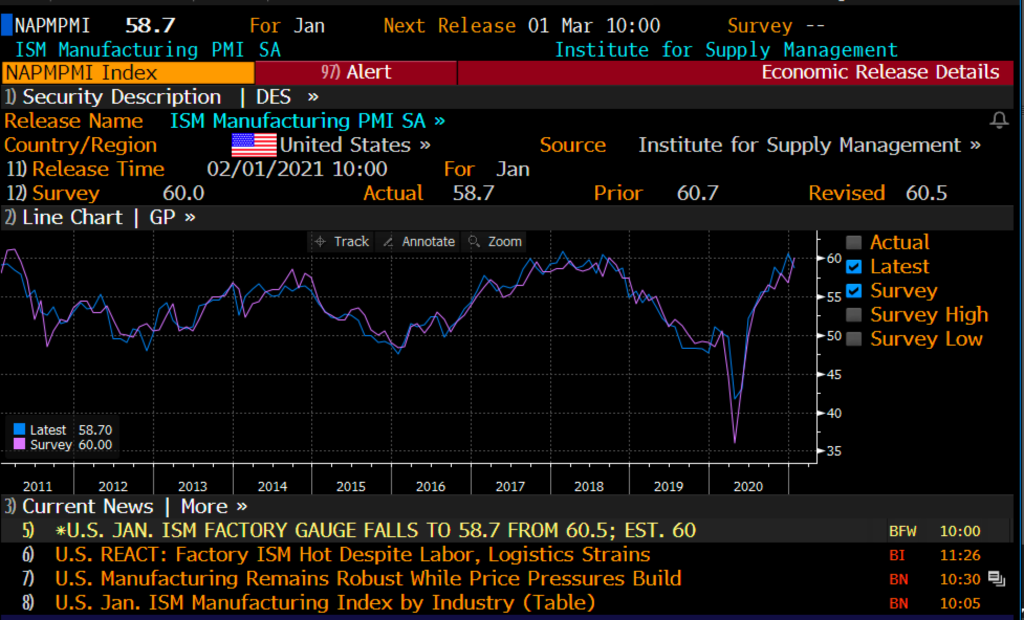 SO what’s the trade? Play for a miss and weak guide on earnings and a move back towards $40 in the coming weeks.

Rationale: this trade idea risks 3.3% of the stock price, breaks-even down 5%, and has a max gain of 8% of the stock price if it is down 13% in two weeks which includes tomorrow’s earnings event. I like the risk-reward of risking 1 to possibly make up to 3x the premium at risk if I were to get the fundamentals and the technical direction correct.