Today after the close INTC will report its Q4 results. The options market is implying about a 5.7% one day move tomorrow. With the stock around $59, the Jan 22nd weekly 59 straddle (the call premium + the put premium) is offered at $3.50 or 6% of the stock price. If you bought that, and thus the implied move for earnings, then you would need a rally above $62.50, or a decline below $55.50 to make money. The stock has moved about 9% on average over the last four quarters, with the last two a decline of 10% and 16%.

Shares of INTC are up 18.5% on the year, with a chunk of those gains coming last week after it was announced the company’s CEO Bob Swan was stepping down in place of VMware’s Bob Gelsinger, causing investors to re-evaluate the company’s path forward after years of poor execution on key growth opportunities and poor integration of large acquisitions per CNBC:

During Swan’s tenure, Intel has suffered blows from competitors. Over the summer, Intel reported that its latest generation chips would be delayed while AMD’s were already shipping inside laptops. Apple announced in the fall that it will use its own proprietary chips in its Mac computers, breaking a 15-year partnership with Intel for its chip supplies.

Third Point urged Intel to divest from “failed acquisitions” and criticized Intel for its “loss of manufacturing leadership.” The firm recently took a roughly $1 billion stake in Intel, according to Reuters.

A month ago on CNBC’s Fast Money when INTC was in the mid $40s I made the case that the stock’s performance was so poor relative to the broad market and its peers and that the sentiment towards the stock from the Wall Street analyst community equally atrocious (16 Buy ratings, 19 Holds & 9 Sells) that the stock could set up as a good “Dogs of the Dow” play early in the new year.

Intel could be a good “dog of the Dow” play after dropping on news that Microsoft will make its own chips, says @RiskReversal. He explains why it’s the worst chart in the market. $INTC pic.twitter.com/K4sjlN41zd

Despite the stock’s recent strong performance, it is still down about 16% from its 52-week highs made last January vs the SMH which made a new all-time high yesterday. The two-year chart below shows last week’s gap above the downtrend that has been in place from last year’s multi-year highs. The stock’s 200-day moving average intersects with that trendline, which should serve as very healthy near-term technical support near $53.50, down about 9%: 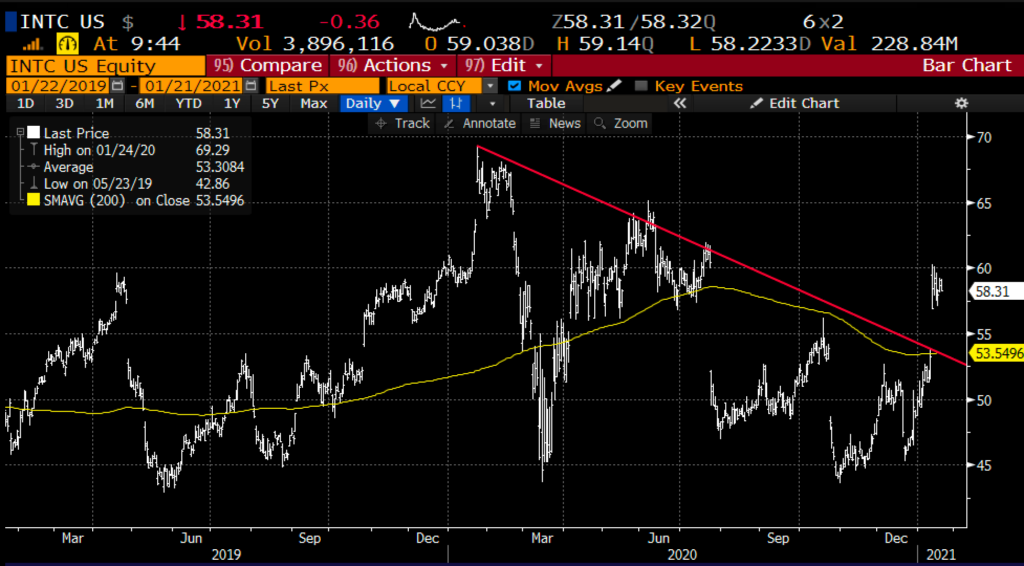 Given the company’s Q4 pre-announcement last week that the company would beat the guidance they gave on their Q3 call in Oct, and the likelihood that they will not give too specific forward guidance, or at least beyond the current quarter until the new CEO takes over next month, I think it is fair to say that expectations are not particularly high, but there is also not likely to be too much new news aside from a “progress report on their 7nm process” the company alluded to in last week’s press release.

My friend Jared Weisfeld, Tech Specialist from Jefferies and frequent Fast Money guest highlighted the following into tonight’s print in a note to his clients this morning:

Given ongoing PC and DCG strength, buyside is looking for upside in-line with historical surprises, call it 3-5%, or about $18BN in revenue for Q4. Given that Gelsinger won’t assume the role until February 15th, buyside is NOT expecting a formal strategy update or a full year FY2021 guide. Given press reports on core i3 outsourcing to TSMC 5nm, could the Company specifically mention that INTC has decided to outsource select CPU products to TSMC? Definitely possible but I’d be very surprised if we got an update on their formal strategic review prior to Gelsinger coming into the role.

Heading into Q1, demand checks remain firmly positive and PC / DCG growth is expected to continue. However most are expecting a conservative guide to provide some air cover for Pat to beat his first quarter. The street is sitting in a very good place for March at -8% q/q, -18% y/y, and folks are looking for modest upside here – call it $16.5BN in revenue vs. the street at $16.2BN. Gross margins are a total wildcard given the ongoing strategic review and progress on 10nm – the street is looking for a ~100bps increase sequentially to 56%.

So what’s the trade? If I were long the stock, I might look for ways to add yield in the event that the stock consolidates some of its recent gains before investors get a sense of the new CEO’s path forward which won’t materialize for at least a few months. Yield enhancement in the form of an overwrite, selling 1 out of the money call vs 100 shares of stock also serves as a buffer to the downside equal to the premium received for selling the call, for instance:

Profits of the stock up to $63, with an effective call-away level of $64.20, up ~9%… what does call-away level mean? Well, when long stock and short call if the stock were to be at 63 or higher on Feb expiration, then 100 shares of stock would be paired off vs 1 short call and in this case at $63. But remember, you received $1.20 for selling the call, so really you have profits till $64.20, the short call strike plus the premium received. The investor could always cover the short call prior to expiration if the stock is above the strike to keep the long stock position intact.

If the stock is below 63 on Feb expiration the long holder takes in $1.20, or 2% of the stock price, also serving as a small downside buffer. Not bad if that was annualized, considering the stock’s annual dividend yield is 2.2%.

If the market were to correct, and INTC’s “progress report” on their 7nm process were to disappoint, the stock could easily head back to support identified above, and investors might consider near-term hedges using a collar, selling an out of the money call, and buying an out of the money put, allowing for potential upside in the stock to the short call, the downside in the stock to the long put, but protected below, for instance:

Profits of the stock up to $62, stock called away at $62 or higher, but investor can always cover the short call prior to expiration to avoid being called away on Feb expiration.

Losses of the stock down to 56, protected below

Rationale: an investor would do this if they were more worried about near-term extreme downside over the possibility of upside over $62, giving up some potential upside for defined risk to the downside to a certain point.

The ideal scenario is that the stock closes just below 62.50 on Feb expiration, then left owning April 62.50 call for $1.25 and allowing for upside above 62.50 beyond Feb expiration