Netflix (NFLX) will report its Q4 earnings after the close. The options market is implying about a 7% move in either direction or about $34.50. With the stock near $503 the Jan 22nd weekly 502.50 Straddle (the call premium + the put premium) is offered at $34, if you bought that and thus the implied weekly movement you would need a rally above $537 or a decline below $468 to make money by Friday’s close. NFLX has moved about 5% on average over the last four quarters, all four moves lower.

Shares of NFLX are already down about 7% on the year, and despite numerous tries to retake its all-time highs made in July near $575, the stock has failed on three attempts well below in the last four or five months, not keeping pace with the numerous new highs in the S&P 500 (SPX) and the Nasdaq 100 (NDX). It is notable that since breaking out to new highs in early July, the stock has found support on numerous occasions (July, Aug, Sept & Nov) just above $450: 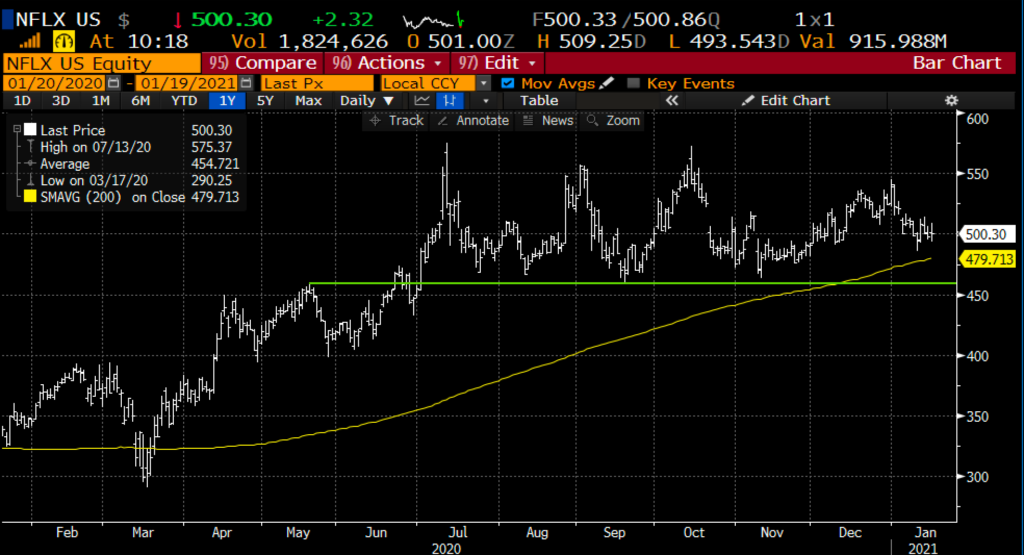 What to expect, from my friend and frequent Fast Money guest, Jared Weisfeld Tech Specialist at Jefferies:

The good news? Shares are on 6 month lows vs. the QQQs as investors worry about difficult comps and a more competitive OTT landscape – expectations are in a very reasonable place. Taking a step back, in Q3 NFLX added 2.2mm net memberships vs. guidance of 2.5mm and NFLX guided Q4 paid net adds to 6.0mm. NFLX has consistently said that they believe 1H 2019 record first half paid net additions would result in slower growth in 2H 2020 and if the Company achieves its Q4 forecast, it would yield a record 34m paid net adds for 2020, above the prior annual high of 28.6m in 2018. NFLX guided Q4 operating margin to 13.5% and restated its intention to grow OPM each year on average by 300bps.

From a FCF perspective, as productions increasingly restart, NFLX guided Q4’20 FCF to be slightly negative and full-year 2020 FCF to be approximately $2 billion, up from their prior expectation of break-even to positive (primarily due to higher OPM% and content push out). NFLX also gave a preliminary 2021 FCF guide of -$1 billion to break-even. Buyside and consensus estimates are in a very good place.

Consensus is looking for ~6.05mm net additions in the December quarter (essentially in-line with guidance) and is sitting at ~7.4mm in the March quarter. Buyside is looking for slight upside in December, call it 6.5mm+ but ~13mm cumulative net sub additions across the December and March quarters should be good enough for shares. More importantly, after the March quarter guide, we’re now just 1 quarter away from lapping the difficult comps with FCF inflecting and an improving slate…all while shares have lagged. This print *should* be a relative non-event given benign to slightly better intra-quarter 3rd party data but the set-up is looking increasingly favorable as we enter 2021. 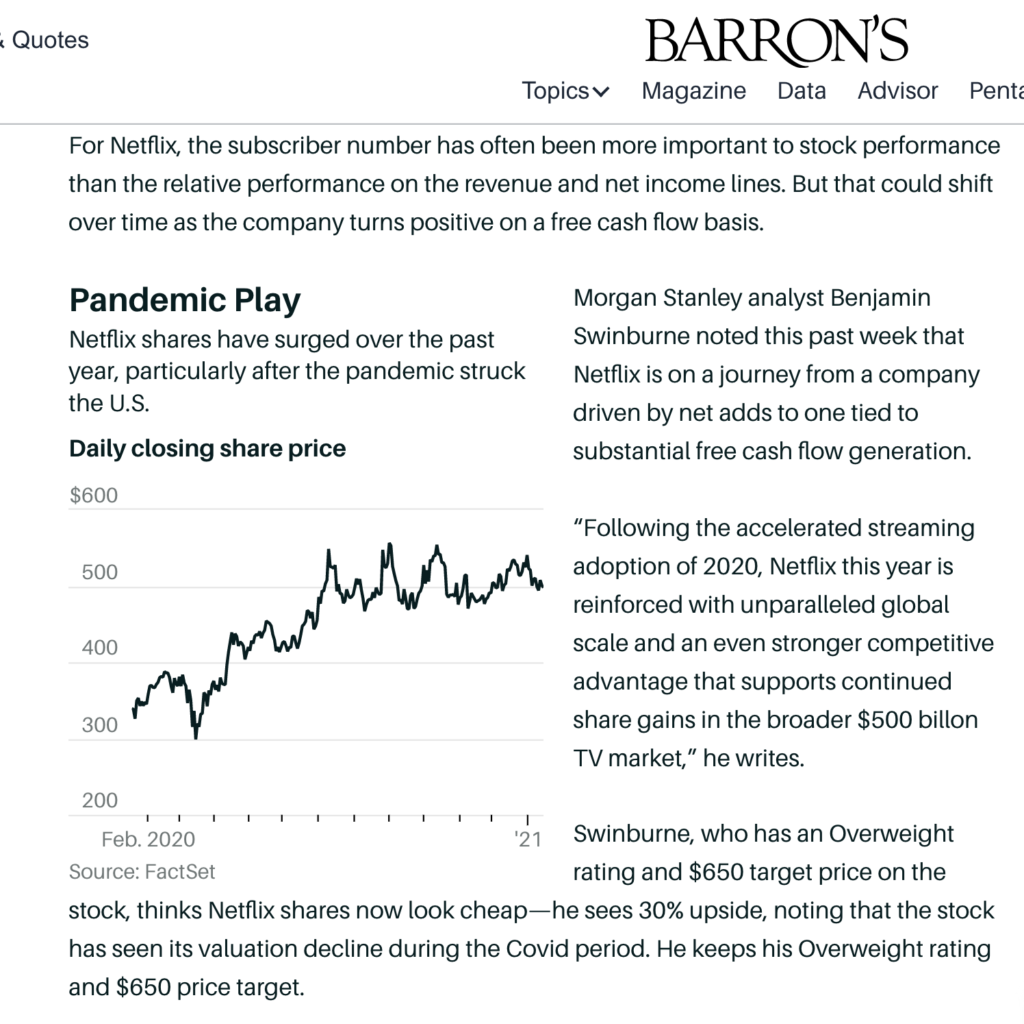 My Take: I suspect there is little in the print tonight that causes the stock to break out above resistance up about $75, as It would take a meaningful beat and raise for the stock to rocket 15% above a 5-month range after such a long period of underperformance. What is clear to me is that Disney’s (DIS) 45% rise since mid-July, when NFLX was at its then highs has clearly stolen some thunder from the NFLX story. One of the pillars of the bear-thesis on NFLX for years was the eventual competition from old media as they transitioned their libraries to an OTT model while pulling back their content from NFLX and competing on price to lure users to their nascent platforms. It is worth noting that NBCUniversal’s Peacock made some big strides in Q4 on subs while HBOMax also launched some blockbuster movies on their platform. The question is what does an OTT bundle look like for most consumers when they are no longer forced to stay at home with far more options for entertainment IRL?

On the downside, a miss and guide lower for 2021 and the stock could easily be approaching downside support near $450 in the coming days…

Long holders might consider overwriting their stock by selling out of the money calls, for instance…

Profits of the stock up to $555, 100 shares called away at $555 with the effective call-away level of $565 (strike + premium received for call sale), up 13% in less than a month. If the stock is below $555 on Feb expiration receive the $10 in the premium or 2%, annualized that is a pretty healthy return, especially for a range-bound stock like NFLX, If the stock is $555 or higher and the holder wants to keep long position intact than can buy to cover the short call prior to Feb expiration.

Losses of the stock below current levels, but really below $493 as the $10 in premium received for the call sale will serve as a 2% buffer to the downside.

If I were looking to play for a retest of the five-month range to the downside I might consider a short-dated put butterfly targeting $450:

Trade Rationale: this trade idea risks 2.9% of the stock price for 3 trading days into a potentially volatile event with a break-even down 3%, or less than half the implied move.

I’ll offer my normal disclaimer for long premium directional trades into events like earnings, you need to get a lot of things right to merely break-even, first and foremost direction, then magnitude of the move, and of course timing. Get the direction wrong tomorrow on a trade like this and this trade will quickly be near worthless.