Hey everyone, Spencer here. Dan and I were discussing this stock and think ORCL is trading at an interesting level here. We’ll watch it over the next few weeks and we wanted to highlight it to you as well. Please hit us back with any thoughts or feedback!

We’re keeping with the theme of undervalued companies in a well-performing sector as a means to generate trade ideas. Earlier this week, Dan outlined a bullish case for ViacomCBS (VIAC) based on this undervaluation theme given how hot streaming has been in general, and ROKU has been in particular. Enterprise software has been a hot area in private markets for years, and this sector shows no signs of slowing down with companies like Snowflake (SNOW), Sumo Logic (SUMO), Asana (ASAN), JFrog (FROG), and others going public at sky-high valuations.

It may take years for these companies to grow into these valuations. ASAN trades at 28x sales, SUMO at 15x sales, FROG at 41x sales, and SNOW at a staggering 171x sales.

In most cases, these companies are yet to even post a profit. We’ll see how well these stocks fare as some of the lock-up periods start to end when venture capital and private equity firms that backed these companies are able to start selling their stakes.

Rather than bet on more speculative trades soon after their IPOs, let’s look at some more established enterprise software names. Even here, you’ll notice that one of these does not look like the other.

ORCL is trading below 19x earnings, with ADBE, INTU, and VMW trading nearly or more than double that, and CRM and ADSK trading at more than 100x earnings. Further, on a sales basis, ORCL trades below 5x revenue along with VMW, whereas the other players trade close to or well above 10x revenue.

Of course, revenue growth forecasts for ORCL are weaker than they are for these competitors. However, ORCL has an 80% gross margin in line with its competitors and is expected to grow EPS by more than 13% in the next year. ORCL is currently profitable and is scaling responsibly, with a clear path toward the cloud and improved profitability metrics.

At some point, valuation has to matter, and for long-term investors looking to take this approach, ORCL seems to be approaching an attractive entry point with near-term support. For shorter-term traders perhaps looking to play this with options, the same argument holds, and we can take a look at the chart to think about more specific levels. 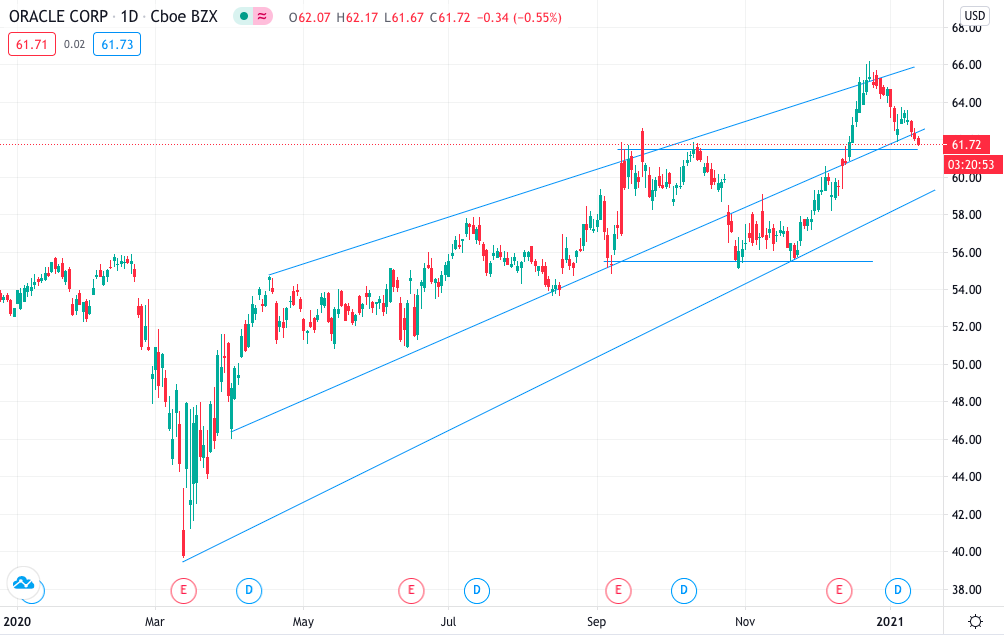 The company is up about 55% since the March low, and has since made a series of higher highs and higher lows with the stock stalling a bit from late October to mid-November. At that time, it had strong support at the $55 level and has since bounced. I’d expect the same at the $61 dollar level as well. As you no doubt know, it is always difficult if not impossible to pick the bottom for a stock. But we can use levels of support from our chart to inform when putting on a trade might be attractive and to think about these risk-reward dynamics.

It is of note that ORCL has also been in the news recently on headlines of 1) an announced move of their HQ to Texas and 2) all the TikTok “deal” headlines the past few months. On TikTok, a preliminary agreement was reached a few months back, with ORCL and Walmart (WMT) anticipated to acquire a combined 20% stake in the new “TikTok Global” (12.5% for ORCL). ORCL would be set to host all US user data on its cloud platform. This would be a massive contract for ORCL, but negotiations are not yet final and CFIUS approval is still pending.

So what’s the trade? The next identifiable catalyst will be their fiscal Q3 earnings which should fall between March 12 and March 18th. The stock has retraced a little more than a third of the move off of its recent lows in late November in the mid $50s, and at the moment it would appear to be in “no-mans-land”, but if the stock were to become near-term oversold, playing from the long side for a valuation re-rating relative to its group makes sense to us. ORCL is on our radar. Stay tuned!