About a month ago I detailed a bullish trade idea in Autonation (AN) by first detailing my bearish view on Carvana (CVNA) or at least its comparative valuation (Read here). What’s interesting about this way of thinking about idea generation, as long as they are not pairs-trades, you only need to be right about the one, that in this case I felt was under-appreciated. Since the Dec 17th post, shares of CVNA are up 6%, while shares of AN are up 16%. But here is the thing, AN was the sorely lagging CVNA off of the March lows, up then about 200% vs CVNA up more than 1000%, which is while I looked at the comparative valuation and technical set-up.

Today I want to look at a high-flyer in the digital media space, Roku Inc (ROKU), not because I am interested in getting long, or even short for that matter, I don’t get the story. On numerous occasions over the last year, I have suggested on CNBC’s Fast Money that this company’s hardware and service will eventually be thrown on the trash-heap of technology no longer needed, see Tivo Inc.

Shares of ROKU are up 25% already in 2021, up 200% in the last year and up 600% from its March lows, sporting a market cap of $52 billion, trading at 22x next year’s sales which are expected to decelerate to 40% from the past two year’s 53% growth. The company is not expected to turn a profit until 2022. I am not stating all of this because I think the stock is a short. If I had unlimited investable capital and no concerns on the risk management front, I would short the crap out of it, but it is a stock market mania, rewarding the craziest stories at the moment, and I have kids to feed and educate.

There is no overhead resistance, while support is back towards last week’s lows at the uptrend from the early Nov lows, which it has since doubled from: 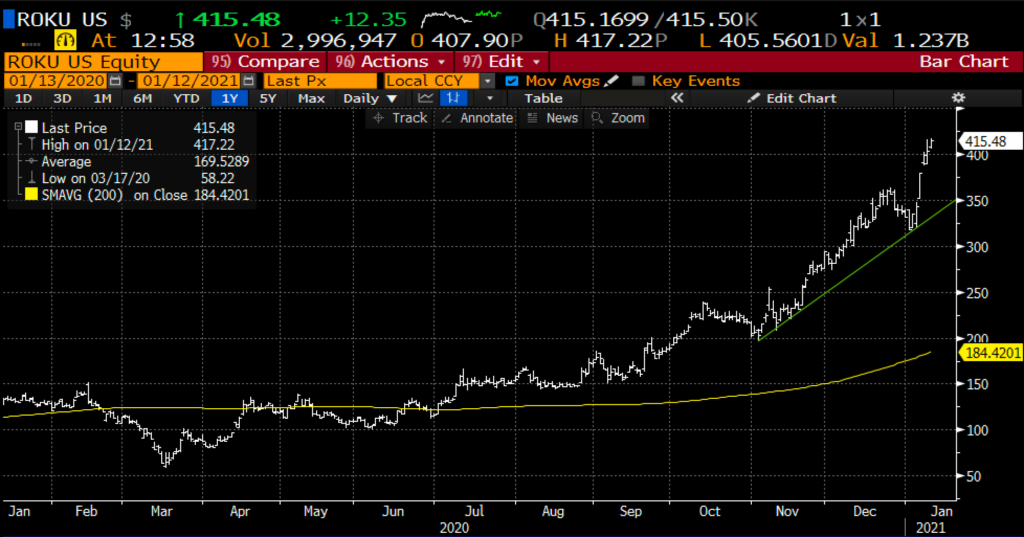 This leads me to a laggard in the media space, ViacomCBS (VIAC), obviously, a content producer, but also very much in the over the top game of delivery. VIAC sports a market cap of half of ROKU’s but throw in their net debt and their enterprise value is $45 billion. Comparing their valuations are apples to oranges with VIAC at nearly 1x sales, 1.6x ev to sales, and 10x earnings. But it is worth noting to most of its media comps it is very cheap.

Shares of VIAC are up 13% on the year, up 320% from its March lows, but interestingly just today making a new 52-week high. The one year chart below shows the near-term technical resistance at the Jan 2020 high, but also the very healthy support at the intersection of the uptrend from its March lows and the stock’s breakout in Nov above $35: 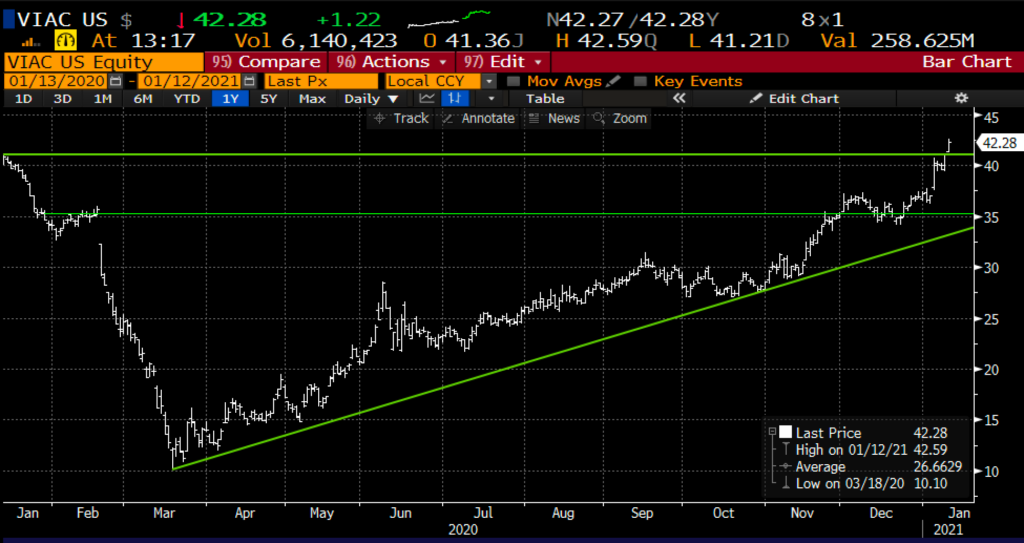 Zooming out a bit to the 5-year chart of VIAC, one can see the stock threatening the downtrend that has been in place since the all-time highs from 2017 near $70, which also coincides with $40 which was a massive breakdown level dating back to 2019: 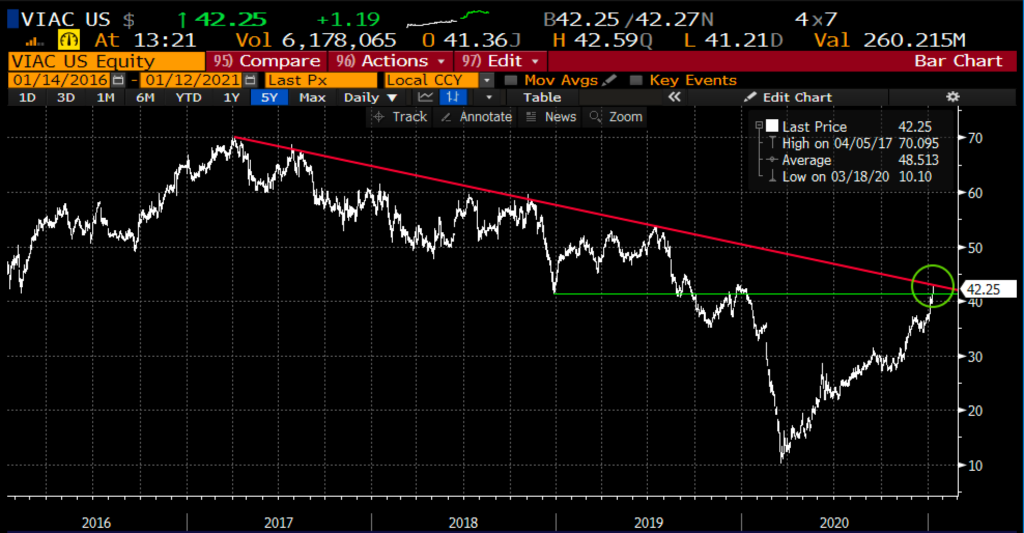 Aside from relative valuation and an improving technical setup, the sentiment is still lousy in the stock with only 10 Buy ratings from Wall Street analyst, 15 Holds and 4 Sells with short interest at 21% of the float. There is no shortage of investors on sites like SeekingAlpha that think the company is a prime takeover candidate, just google it, and I agree with that. The next identifiable catalyst will be the company’s Q4 earnings which should fall around Feb 20th.

So what’s the trade? I like the idea of playing for a breakout of a long downtrend, the potential for sentiment to improve as the economy gets better over the course of 2021, as investors may continue to look for cheap laggards with takeover potential.