Last month Apple (AAPL) introduced their new Macbook Air with an M1 chip, designed by them, NOT Intel (INTC), bringing to an end a 15-year partnership between the two companies where INTC designed and made the chips that went inside AAPL’s bestselling laptops.

This past Friday shares of INTC got creamed on reports that Microsoft (MSFT) would start to design their own chips, with a comment from a spokesman adding fuel to INTC’s silicon fire, per CNBC.com:

“Because silicon is a foundational building block for technology, we’re continuing to invest in our own capabilities in areas like design, manufacturing and tools, while also fostering and strengthening partnerships with a wide range of chip providers,

AAPL is a 7.5% customer of INTC’s by revenue where MSFT is much smaller at about 1%, but its software runs on hardware OEMs like Dell, Hewlett, and LG that make up 40% of their sales, which might influence their choice in chips, if MSFT software starts being written for different microprocessor technology. I would also add that Alphabet (GOOGL) at nearly 3.5% of revs could be next in line to move chip development in-house, which I suspect they are already, as teased by CEO Sundar Pichai in October.

As you might expect, INTC trades horribly, as it must be one of the worst, if not the worst perofmring stock in the Dow Jones Industrial Average, down 23% on the year, down 33% from its 52-week highs made in January and up only about 5% from its 52-week lows made on Oct 30th.

The one year chart is a mess, possibly the worst looking chart of a mega-cap tech stock with a very well defined downtrend, with a series of earnings gaps and now approaching a key re-test of support of the March – Oct double bottom: 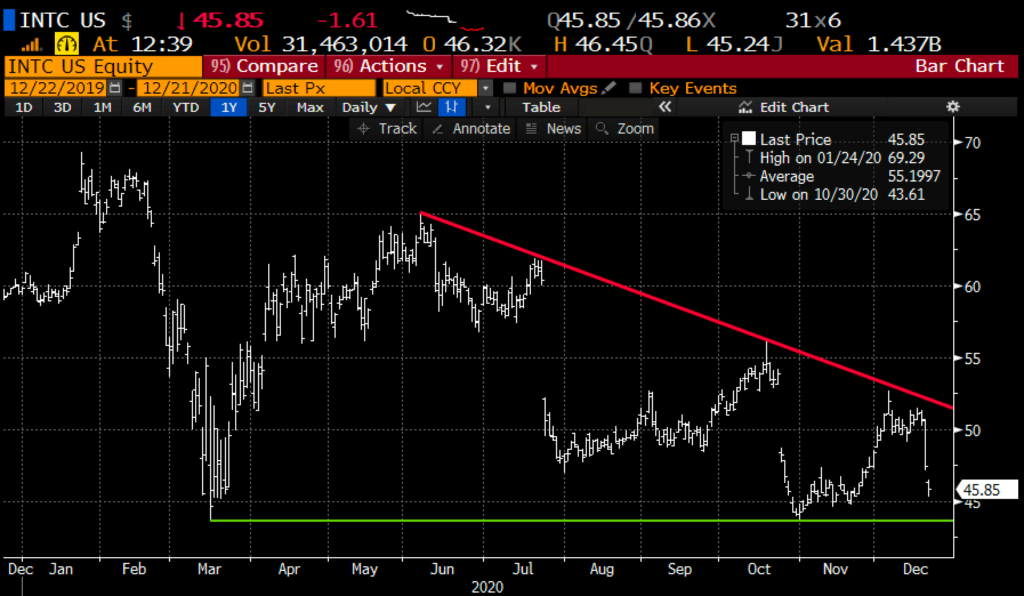 The five-year chart below shows just how important the $42-$43 support level is dating back to its late 2017 breakout:

INTC is as unloved by Wall Street as it has ever been with just under 30% of the analysts who cover the stock rating it a Buy, 45% a Hold, and 25% a SELL, not a rating seen too often on a once Blue Chip tech stock. Heck, 33% of the Wall Street analyst who covers IBM rate the stock a Buy and only 11% a Sell.

INTC’s EPS is expected to essentially be flat year over year, while their sales are expected to increase 5%, while both are expected to fall 6-7% next year. The real problem here is the collapse in Gross Margins down 3.3 percentage points from last year to an 11-year low at $56.74, down from their 2017 peak just below 64%, with just a 1% increase expected for 2021. The news from AAPL and possibly MSFT will give investors little confidence that the company can right the ship as upstarts AMD and Nvidia have been taking share not only by being more nimble from a fabless perspective but also from their miss-execution on new technologies, especially their 7nanometer process technology.

Shares of INTC trade at about 10x earnings, with no growth expected, they are divesting non-core businesses. The company has a good balance sheet with $22 billion in cash, vs $36 billion in debt on their $188 billion market cap, leaving them room to continue to aggressively buyback their stock, but not likely make acquisitions as they are still digesting their massive spree that included about $16 billion each for MobileEye in 2017 and Altera in 2015.

So what’s the trade? INTC likely re-tests the recent and multi-year lows between $42-43, but it is certainly a hard press on the short side here with sentiment and the news flow so poor.

INTC might be viewed as a sort of “dogs of the Dow” candidate heading into the new year, especially if it were to grind lower towards technical support.

If the stock were to be close to $43 in a week, the Feb 45 – 52.50 call spread might look attractive playing for a new year bounce and the slightest bit of good news causing shorts to cover.

Over the next week or so I will be writing up some ideas that might be viewed as contrarian, but that are worth keeping on your radar.