Shares of online used car dealer Carvana (CVNA) are trading up 5.5% today, to a new all-time high, placing it up 200% on the year, 1143% from its March lows, sporting a market cap of $44 billion. The used car market has emerged to be a massive bright spot in the “pandemic economy” as public transportation in many urban areas has ground to a halt and fears of virus spread through rideshare has turned the proposition of car ownership on its head in a very short period of time. Despite the boom, CVNA’s 2020 sales growth is expected to decelerate meaningfully from the last two year’s 100% plus growth to 36% this year but then re-accelerate to 47% next year. CVNA trades at about 8.4x this year’s expected sales of $5.4 billion and 5.6x next year’s expected $7.9 billion. Despite that hefty sales growth, the company has never had a profitable quarter, with last quarter’s 10 cent loss, or about $17 million on about $1.5 billion in sales, and current consensus does not call for an adjusted gain until 2023 when the company is expected to print $15 billion in sales.

Looking at this chart from CVNA’s IPO in 2017, and this year’s epic run from the lows you’d think they developed a vaccine for the coronavirus. 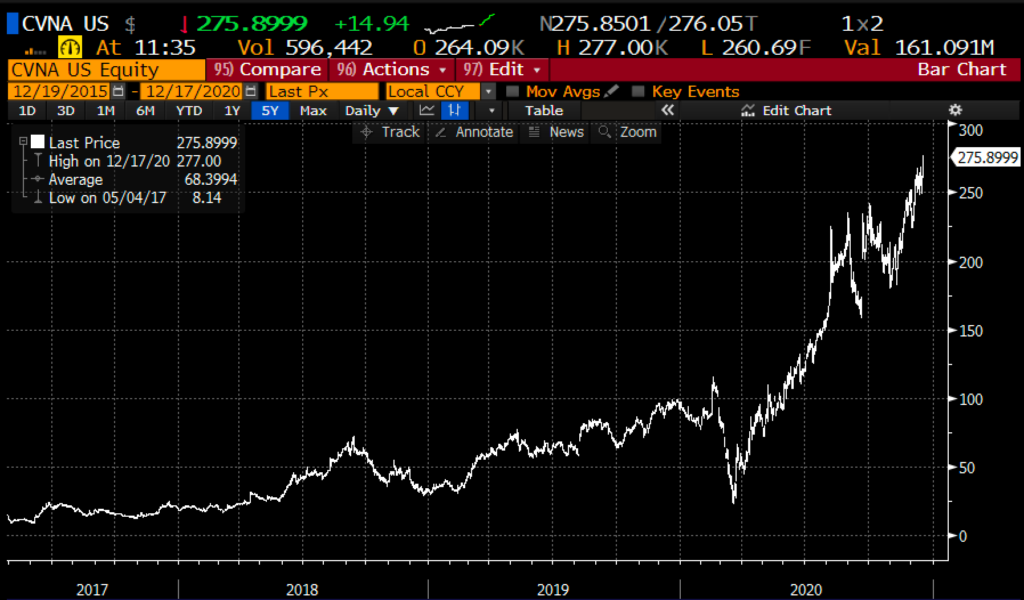 A couple of weeks ago, Jefferies John Colantuoni initiated coverage of CVNA with a Buy and a $300 price target, suggesting:

A Shiny New Model that’s Speeding Past Competition; Initiate at Buy. John believes the $550B market for used vehicles is ripe for disruption, and view CVNA’s scalable model and ability to reduce purchase friction as helping drive share gains. CVNA is also a rare secular beneficiary of COVID with easy comps, putting it on an impressive trajectory next year. In addition, he believes the stock could double if CVNA continues expanding market share at a historical pace.

That might all be true, but it will also suggest that Autonation (AN), the largest used car dealer in the U.S., which saw its online sales this year go from 30% of sales to 40% and rising, is likely very undervalued – trading at just .29x its expected sales of $20 billion. While AN’s sales are expected to decline 5% this year due to closings of many of their showrooms in the spring and the costs associated with furloughing thousands of employees, their earnings are expected to increase 40% with an expected net income of $600 million. AN’s gross margins are 17.6% vs CVNA at just 15%, I suspect a rerating for AN, trading at a little less than 10x earnings could be in the cards in 2021 if the company continues to move operations online. CVNA’s market cap nearly 10x that of AN.

It is worth noting that AN invested in online car sales company Vroom (VRM) before its June 2020 IPO and has held onto the position, worth $288.5 million as of September 30. VRM’s market cap is $5.1 billion, down from almost $10 billion in Sept at its post-IPO highs, and now is nearly equal to that of AN’s $5.9 billion market cap. AN has nearly 10x the sales of VRM.

Prior to the VRM investment, the company set its sights on the autonomous vehicle space with two investments in Alphabet’s autonomous driving unit Waymo, totaling $50 million in two rounds. Aside from the investment, the companies also entered into a service agreement to provide longtime vehicle maintenance and repairs for some of their fleets, which may prove to be a very valuable entre into a much-hyped but yet to be disruptive theme in the automotive sector.

Shares of AN are up 36% on the year, but up 222% from its March lows, and this past week consolidating just below its 52-week and all-time highs made in October.

The one year chart is a thing of beauty holding its uptrend from March lows like a boss: 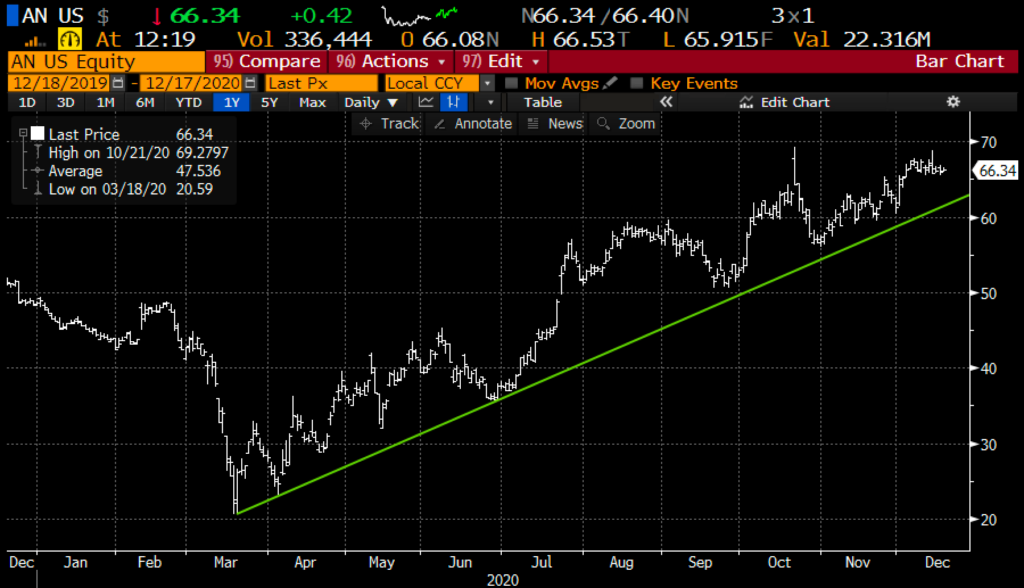 The ten-year chart below shows the stock breaking its downtrend from its prior all-time highs made in 2015, pausing at that high with an obvious support range down to the 2018 high near $62: 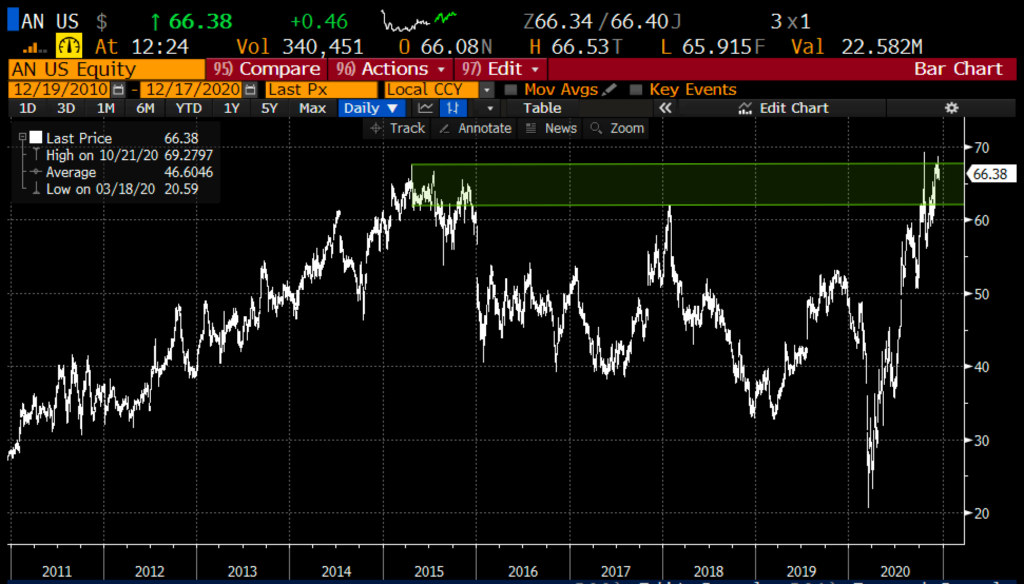 So what’s the trade? I suspect AN will continue to push further into online sales in 2021, reducing its store footprint, opening up new markets at a much lower cost. If I were inclined to play for a breakout to new highs in the new year I might consider a call spread in Feb expiration: