The S&P 500 (SPX) is having a little dance with technical resistance from its February, September & November highs, now within 1% from last week’s all-time highs: 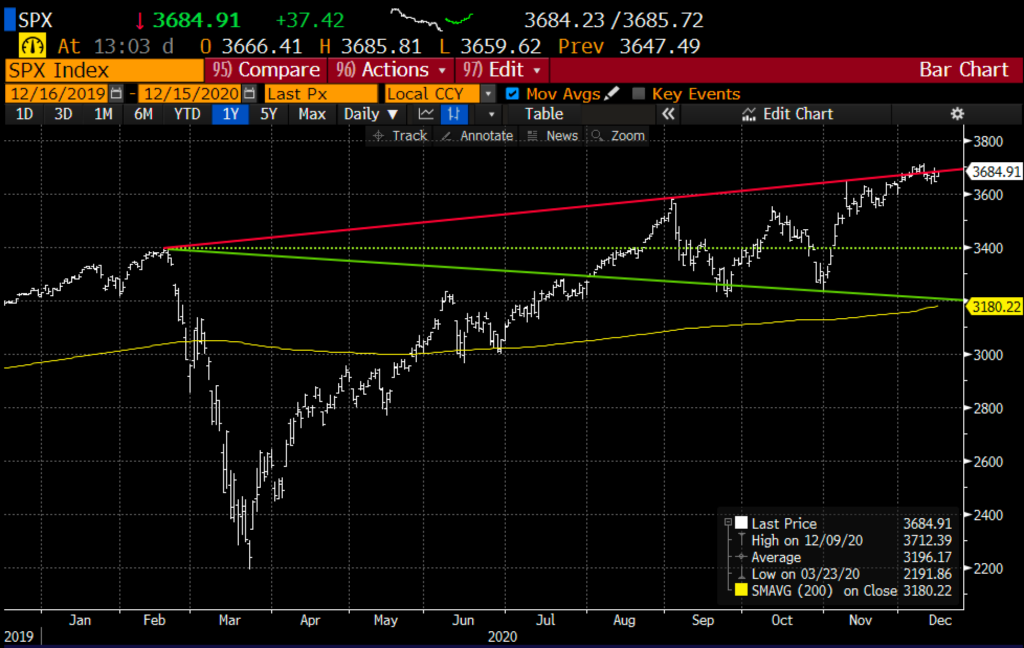 To my eye, a pullback toward the February high near $3400 would be perfectly healthy, setting the stage for further consolidation as investors get a better sense for how the vaccine distribution is going, how long virus mitigation will be in full force as it is in many parts of the country again and what the outlook is for further fiscal stimulus to help consumers and small businesses who have seen expanded unemployment and PPP benefits run dry as the virus is at its worst level in our country. If there are any hiccups with the vaccine, and an impasse on fiscal stimulus and it appears the Dems might take both seats in the Georgia runoff ensuring control of the Senate, then downside support comes near $3200, the Sept and Nov lows and very near its 200-day moving average.

Last week when the SPX was near $3700 I detailed a hedge idea in the SPY on RiskReversal and on my collaborative series with Fidelity Investments, In The Money:

From Dec 9th, these prices are about the same as they were last week and I still like this idea as a hedge for a portfolio into the new year:

Today’s bounce in the SPX, up 1.1% is on the heels of vaccine optimism, and rumblings of fiscal stimulus meetings on Capitol Hill are also helped by AAPL’s 4.5% gain on unsubstantiated rumors of better than expected iPhone 12 builds into the new year.

But all eyes remain on Tesla’s upcoming addition to the S&P 500 Index on Friday’s close, which has caused a frenzy in the stock, a panic by shorts to cover, speculators to buy in front of indexers, and indexers trying not to pay the top tick after a nearly 60% rip in the last month alone since the announcement that it would go into the index. The YTD chart below shows the stock’s 80% rip from its August lows to its Sept 2nd highs and its subsequent 34% drop, making its 3rd meaningful correction of the year.. what will next week bring? 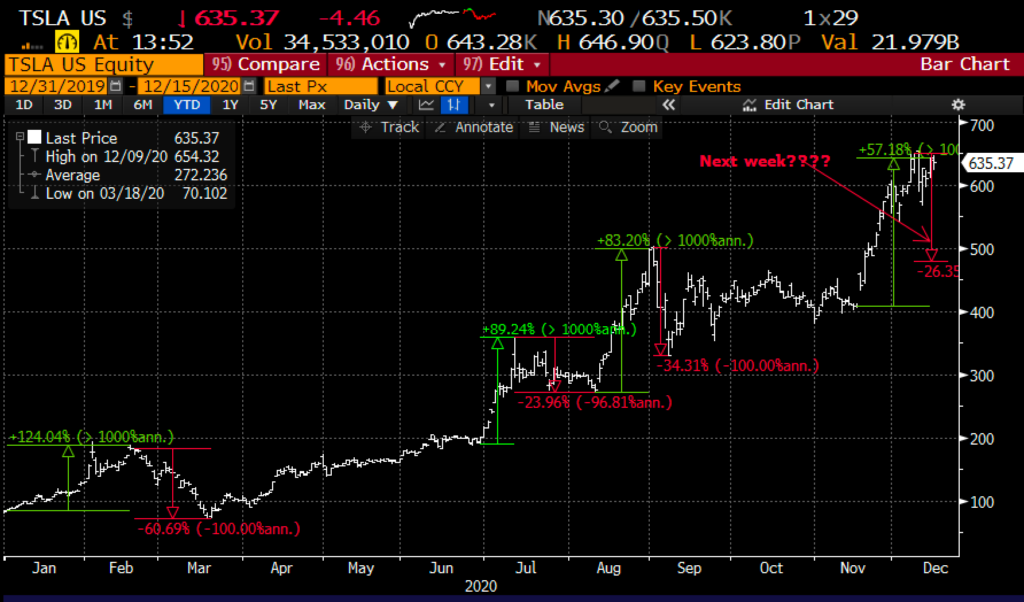 It is worth noting that with a $615 billion market cap, it is the fifth-largest holding in the Nasdaq 100 (NDX or the QQQ ETF that tracks it) at 4.7%. The top 6 names (MSFT, AAPL, GOOGL, AMZN, FB & TSLA) make up 50% of the weight of the QQQ and represent $8 trillion in market cap. This comes as the NDX is up nearly 44% on the year, with tremendously speculative price action in IPOs that will soon find themselves in the NDX/QQQ. Last week Airbnb (ABNB) and Doordash (DASH) IPO’d and briefly had combined market caps of $175 billion, now $125 billion. Snowflake (SNOW), an enterprise software company that IPO’d in mid-Sept at $120, briefly traded as high as $429 last week with a market cap well over $100 billion and is now only $90 billion. Palantir (PLTR), a 15-year-old money-losing software company with large contracts with the U.S. government, went public at $10 through a direct listing in Sept and traded as high as $33 last month, now with a market cap of $45 billion, or 42x this year’s expected sales. This excludes the more than $77 billion that has been raised with SPACs this year, more than 200 blank check companies looking for private companies to take public, many of them competing with each other driving up valuations, with many targets likely not suitable for public markets.

It is also worth noting that as stocks like MSFT, AAPL, and AMZN have gone sideways for months, the Russell 2000, the small-cap index has massively outperformed large-caps as we have seen a rotation into value and more economically cyclical groups like energy, financials transports, and industrial, those hardest hit by the pandemic.

Ok, I get it, land the plane… I am kind of torn here… I see a re-rotation and NDX outperformance, and I think the best set up for those bullish on 2021 is for the market not to close on the dead highs, so a correction back to 3400 in SPX would be healthy. I look at the 1-year chart of the QQQ and I say to myself that is a heck of consolidation as its leaders digest some of the massive year-to-date gains in uncertain times, but I want to own that breakout. But when I put it all together, I see the potential for a massive reversal in TSLA, profit-taking in some of the 2020 IPOs and SPACs and maybe the underperformance in mega-cap tech suggests valuations are stretched and a massive pull forward in demand this year causes investors to start to consider deceleration in 2021.

The QQQ could be setting up for a very sharp fall, but a buyable one, shaking out some weak hands, with very healthy support between its Nov and Sept lows: 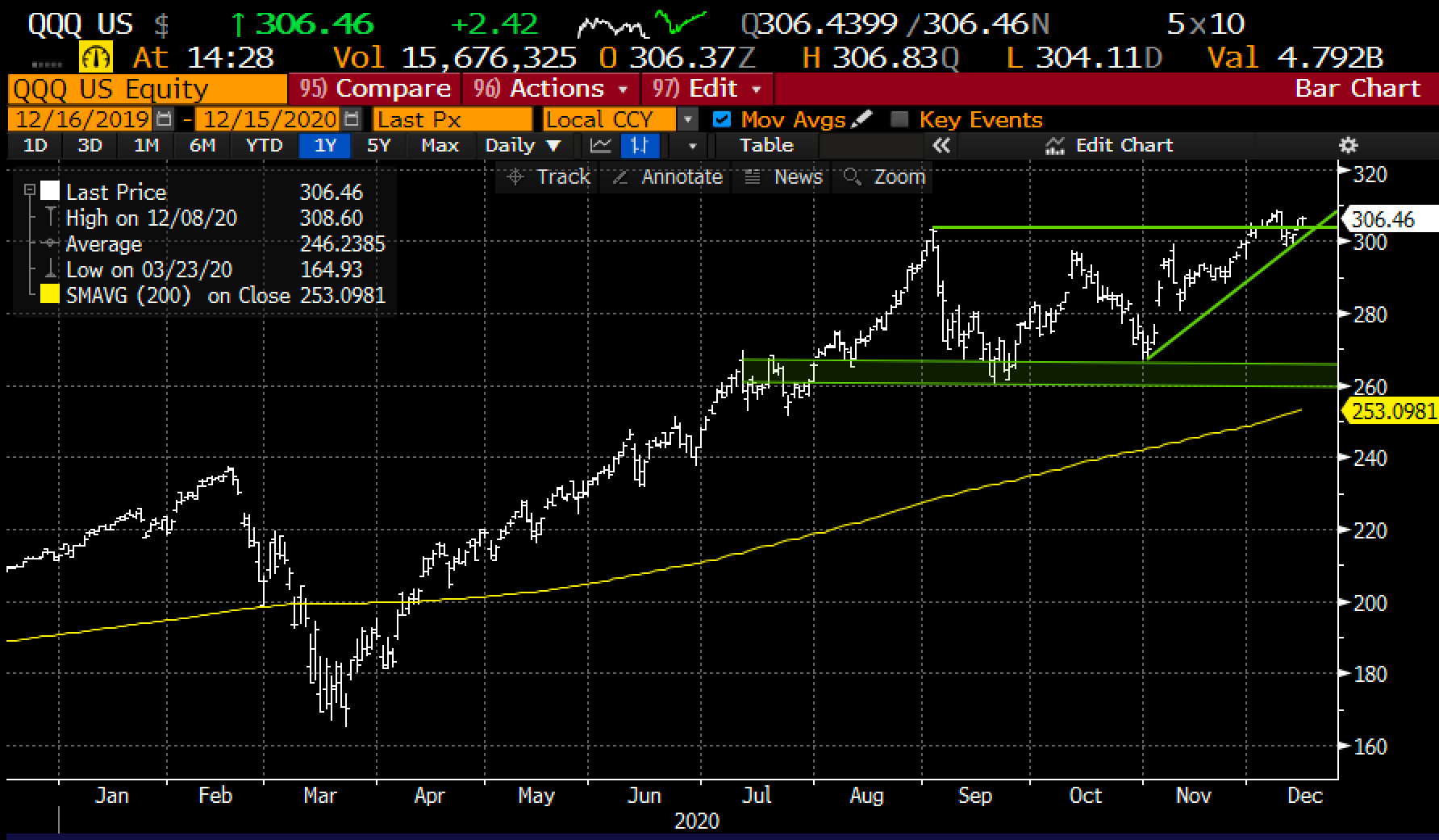 Let’s see how the market trades after the Fed’s comments tomorrow that are likely to remain very dovish, let’s also see if we get any news on the fiscal stimulus that Fed Chair Powell so badly wants Congress, Treasury, and the White House to push through, let’s see how tech, specifically Tesla trades into Friday’s addition and the rebalance… and then we will trade!