Over the last few months, I have had the pleasure of having Spencer Korek work with me in his senior year as a finance major at the University of Pennsylvania in the Wharton School. Spencer has been assisting me on some strategic projects as it relates to Risk Reversal, but he has also been doing some research on trade ideas and here is the first one that he and I worked on together.

I agree with Spencer’s fundamental and technical analysis on the streaming market and specifically on AT&T. He and I arrived at what we think is an attractive, defined risk way to play the catalysts that he outlined and the technical setup over the next couple of months.

Please hit us back with any thoughts or feedback, happy to hear it!

There’s been a lot of news regarding traditional media companies and their streaming platforms over the last week. While Disney (DIS) and their investor day has caught much of the attention, there were a few announcements on AT&T (T) as well.

As AT&T is digesting their $85 billion Time Warner acquisition which closed in 2018, they’re looking to divest non-core businesses and reduce their debt load. They’re selling off their anime streaming service Crunchyroll for $1.175 billion per the WSJ.

The deal with Sony’s Funimation Global Group comes as AT&T focuses its attention on its own mainstream HBO Max video service, which launched in the U.S. in late May. Some details of Sony’s pending purchase were reported in October by Nikkei News.

And the WSJ also reports they’re looking to sell off DirecTV – a bigger cash inflow that’ll help AT&T pay off more of their debt from the Time Warner acquisition a few years back.

AT&T Inc. (T) got bids for its DirecTV unit valuing the satellite-TV service at more than $15 billion including debt, said people familiar with the matter, as the widely watched auction winds toward a resolution.

Among the top bidders were Churchill Capital Corp. IV (CCIV) a blank-check company run by former banker Michael Klein, and private-equity firm TPG, the people said. Apollo Global Management Inc. (APO), long seen by many as the front-runner, submitted a bid valuing the business at less than $15 billion, some of the people said.

Given the slow-growth, utility nature of AT&T’s mature legacy businesses, WarnerMedia is emerging as the growth engine behind AT&T. This is an asset that has TV channels (CNN, TBS, TruTV, TNT and others), Warner Bros. studios and related properties (including DC and Warner Bros. gaming unit), movie exposure for a reopening play and, more presciently today, HBO and HBO Max. Subscriber growth on HBO Max is accelerating since the product launch in May earlier this year. Since September 30, HBO Max has added 4 million subscribers, lifting their subscriber count from 8.6 million to 12.6 million users in just over two months’ time. With former Hulu CEO Jason Kilar at the helm of WarnerMedia, he’s looking to rotate this business into one that’s attractive to the markets: the recurring revenue subscription model.

Late last week, AT&T announced their intention to simultaneously release 2021 movies on HBO Max as well as in theaters. While this decision has come under fire from content producers (most notably Christopher Nolan), this is a win for AT&T. They are serious about remolding the way this media company does business – but doesn’t require much additional investment from them. This content is shelved and ready to go. All it needs is a premium platform to be released on: enter HBO Max. It is a no-brainer decision given the state of the pandemic, and one the market will reward over the long-term in my opinion.

There is, however, a short-term catalyst I’m looking for in the next few weeks: HBO Max has not yet reached a deal with Roku. They just got onto Amazon Fire TV devices a few weeks ago, and it sounds like they have every intention to get onto Roku ASAP. Given last week’s announcement to release new movies on the platform, we’re very likely to reach a deal in the next few weeks before we hit the 2021 slate of movies. Roku’s stock has gained 145% this year, is up 460% from the March lows and now sports a market cap of $42 billion, nearly double that of ViacomCBS. This is a powerful platform that will accelerate HBO Max’s growth to the next level. As of last month, Roku reported they had 46 million monthly subscribers on their platform in the US. Notably, Roku is the last streaming device platform that does not yet have a downloadable HBO Max app.

The access to Roku, coupled with the release of Wonder Woman 1984 on Christmas Day, could serve as an accelerant to subscriptions in the way that The Mandalorian did for Disney+.

Speaking of Disney, shares are up 14% today, and up 22% on the year after their investor conference smashed content expectations for the next few years. 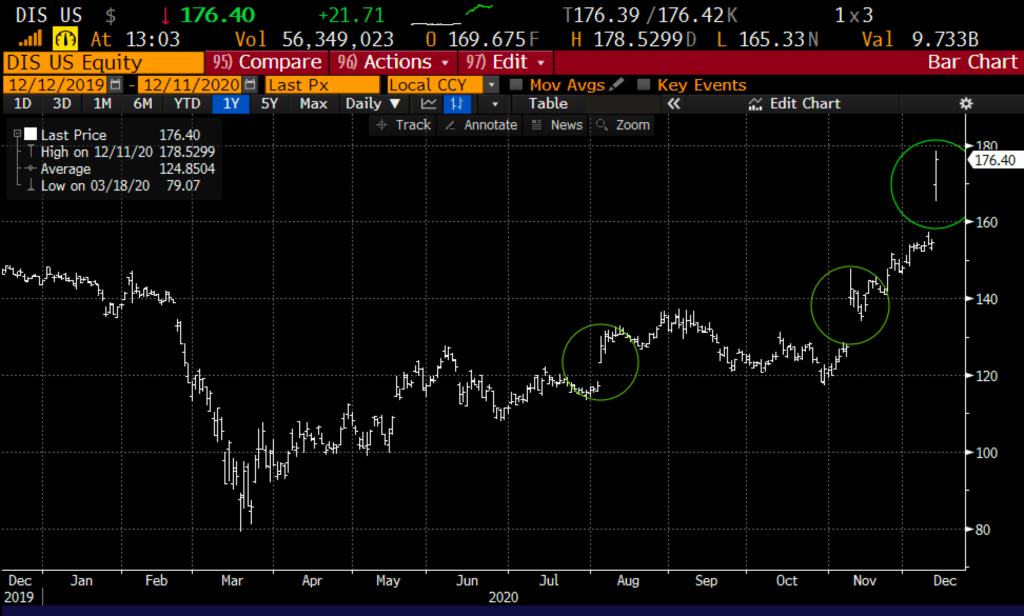 The three gaps over the last six months highlighted above are specifically related to progress reports on their Disney+ streaming endeavors that have come in better than the company’s forecasts and clearly beaten investor’s expectations.

Let’s take a look at where the stock has been and some technical levels that might inform what the next move might be.

Looking at the 1-year chart, since making a new 52-week low in late October, the stock has risen 18% and is now trading near a four-month high, this week closing above its 200-day moving average for the first time since early March, suggesting an intermediate-term momentum shift. Despite the stock’s recent gains, it is still down 20% on the year but we could be looking at a breakout given the underlying fundamental story. 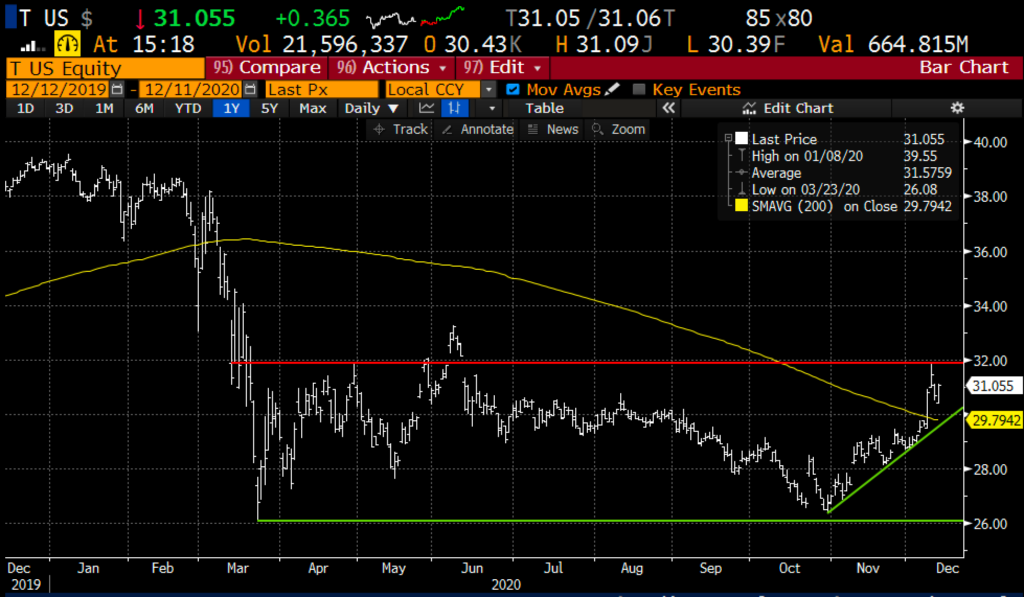 Zooming out a bit to the five-year chart, it becomes clear that beyond the June highs, there is little overhead resistance until you hit the high 30s. 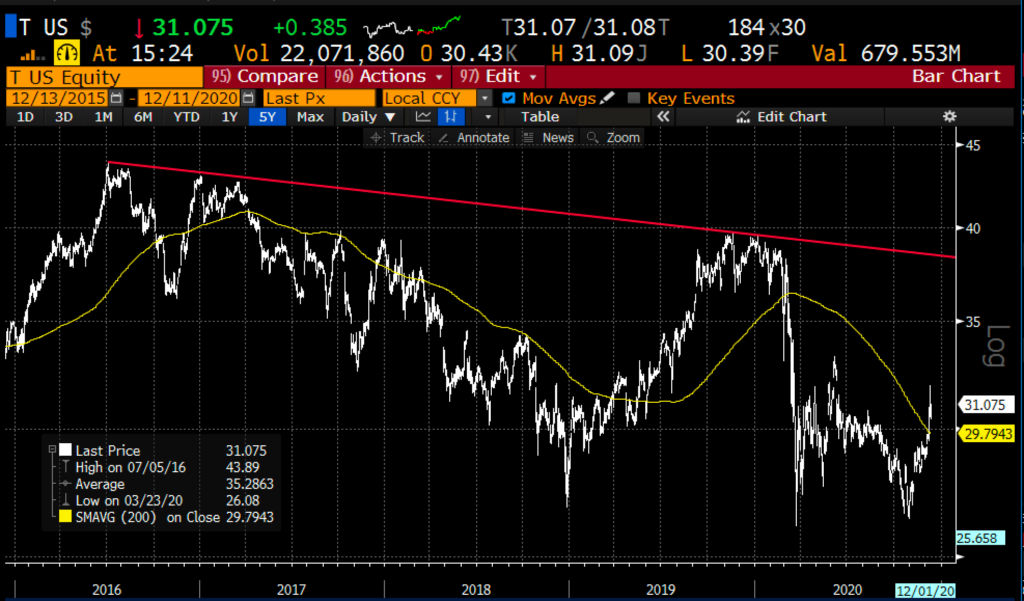 We are seeing the growth of streaming services through this pandemic, and though they may be a late entrant because of the holdup in closing the AT&T/Time Warner deal, the pandemic has accelerated this transition (as it has so many others). The bottom line is: HBO Max has legs and AT&T stock has room to run. With my expectation of accelerated subscription demand in the next few months, AT&T is well positioned for investors to start repricing their digital streaming assets the way they have in Disney over the last six months.

For those intermediate to longer-term investors attracted to AT&T’s 6.67% dividend yield, this might be an attractive entry point to the stock using $28 to the downside as a near-term stop. At its current dividend level, if one were to hold this stock for a year, the dividend would serve as slightly more than a $2 buffer to the downside.

Or, if you’re inclined to express a bullish view using options, you might consider a call spread playing for a near-term breakout above $32 resistance.

To play this with options, I’m looking at a February call spread, for instance: