Shares of The Home Depot (HD) are up 21% on the year, a year that has seen a massive spike in demand for new homes, sales, and improvements as people moved from urban centers during the pandemic and spent stimulus money to fix up their existing residence during lockdowns and continued work from home.

HD is down about 10% from its late-August all-time high, having made a series of lower highs and lower lows since, but this week finding some technical support at its mid-July breakout level: 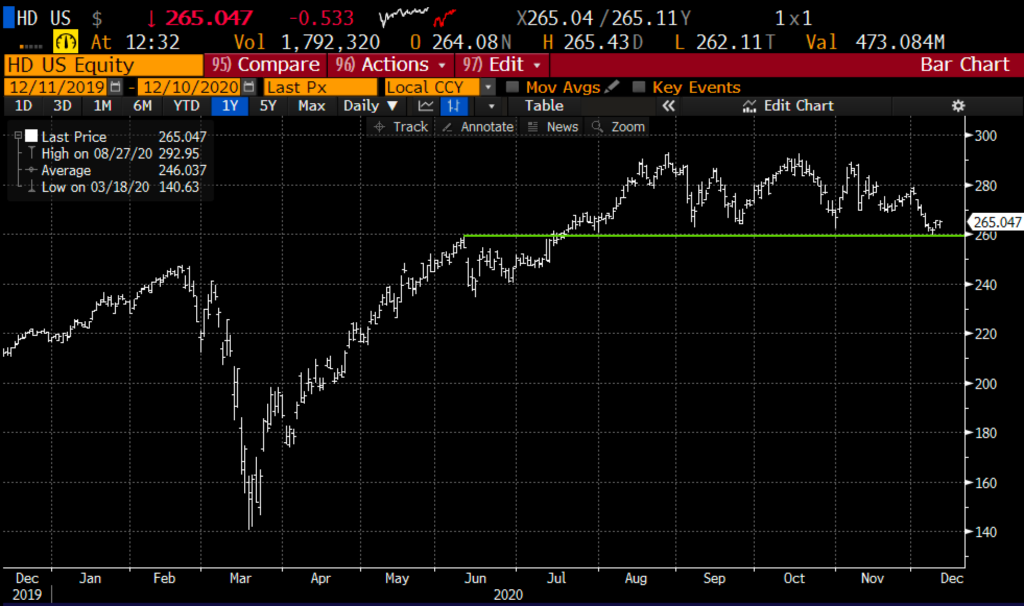 The loss of momentum over the last few months, not keeping pace with the S&P 500 (SPX), made a new all-time high late last month above its prior high on Sept 2nd and is now down just 1% its all-time high made yesterday, is notable. This underperformance over the last 6 weeks is likely due to the uncertainty about the near-term fiscal stimulus.

This technical set-up is a bit treacherous, in my opinion. If you think that we are not going to get meaningfully fiscal stimulus for months and that recent economic data that shows waning job growth, consumer spending, confidence, and savings rates could lead to a double-dip recession in the first half of 2021, then playing for a break of support and retest of $240 makes sense down about 10% from current levels.

But if you see some bi-partisan deal before Biden’s inauguration in January, the virus calming down, and thus reduced mitigation attempts taking pressure off of the economy and better than expected timing on vaccines, then shares of HD could be testing the prior highs, up about 10% near $293 in the coming weeks/months.

With the stock near $265, the Jan 265 straddle (the call premium + the put premium) is offered at about $17, or about 6.5% of the stock price; if you bought that and thus the implied movement over the next month, unsure of direction, but conviction the stock would love more than 6,5% in either direction, then you would need a rally above $282, or a decline below $248 by Jan expiration.

Buying straddles in a dull market is a tough way to consistently make money, especially for those who are NOT scalping deltas daily, trading delta neutral. Still, it is worth noting that with the stock down 10% from its all-time highs, that short-dated options premiums are very near the levels they were before the market crashed in February, with 30-day at the money implied volatility (blue line below), trading at the level of realized volatility (white line below, how much the stock has been moving) making options appear cheap for those who are looking to express defined risk directional views:

Choose your own home improvement adventure; it may be easier than agreeing on that coat of paint your wife prefers for the home office 😉

This stock looks poised to move.