DocuSign (DOCU) will report its fiscal Q3 results today after the close. The options market is implying about an 8.5% one-day move tomorrow, or about $19.50 in either direction, which is basically in line with its average one-day post-earnings move since going public in 2018.

With the stock around $230, the Dec 4th straddle (the call premium + the put premium) is offered at about $19.50, if you bought that and thus the implied earnings move you would need a rally above $249.50, or a decline below $210.50 by tomorrow’s close to make money. If you had a strong conviction on a move higher or lower, buying the at the money call or put you would only feed a 4.25% move to break-even, or half the implied move of 8.5%.

Shares of DOCU are up 210% this year, spending the better part of the last four months in a trading range between $190 and $250, despite a short-lived blip in early Sept, prior to the market’s sharp reversal. 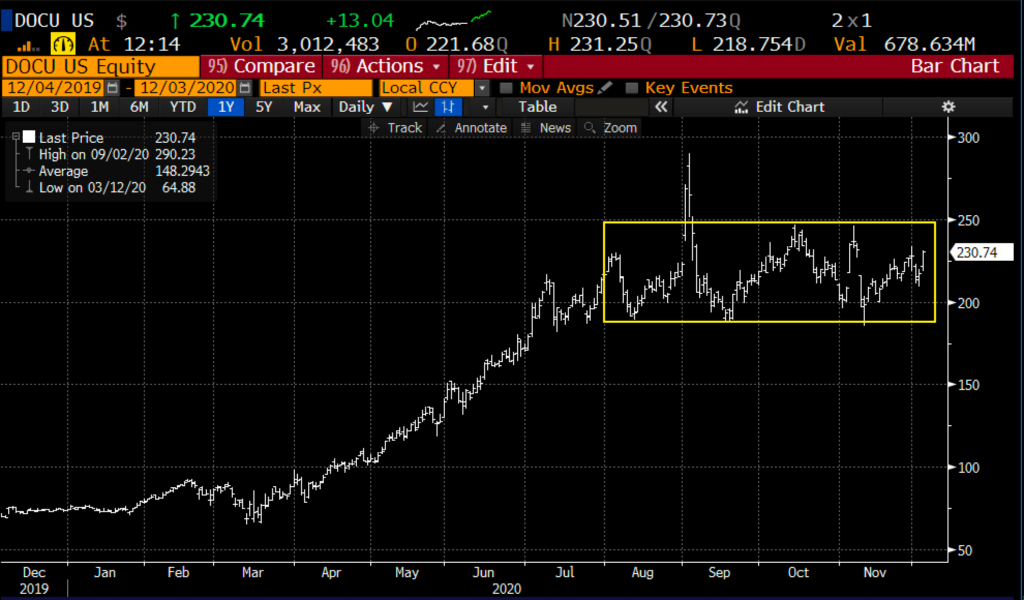 The stock’s performance largely came in April/May/June as it became very clear that the work from home trade would be a fixture of the remainder of 2020, and possibly beyond. The stock’s consolidation since though is largely due to with the company’s topline growth rate in the mid 40s% not as dramatic as soon of its WFH peers like Zoom (ZM) who had been posting 350% yoy growth on a much larger revenue number. This disparity is also visible in the valuation gap with DOCU trading 30x FY2021 vs ZM trading 45x, and that after the stock’s 30% decline over the last month.

Wall Street analysts are fairly positive on the stock with 123 Buy ratings, 5 Holds and 1 Sells with an average 12-month price target of about $247, very near the recent technical resistance level.

Here is the problem with the way I see DCOU, up 250% from its March lows, sporting a $42 billion market cap, trading 30x sales of ~$1.3 billion in the current fiscal year, growing 42% YoY with net income of $115 million, or a loss of ~$190 million on a GAAP basis is that the stock has gone from what would have been a great feature on a larger platform, or a part of a company like Adobe (ADBE) or Salesforce.com (CRM) to being impossible takeover. Now the company is like to scrutiny regarding its valuation as investors contemplate what decelerating revenue growth looks like, as Wall Street consensus has it going down to about 32% next year in fiscal 2022.

So what’s the trade? This is a pretty tough one. Back on Sept 1st DOCU gapped fro the prior day’s close at $223 to close at an all-time high at $268, up in sympathy with ZM’s blowout earnings and outlook and treadin as high as $293 the next day before reversing with the broad market On Sept 3rd following their own results the stock closed down 10% which woud be the startof a 35% peak to trough decline in the stock over the next couple of weeks. As stated above, the stock has been rangebound, but that range has been wide. I suspect the optins market is prciing the pitential movement corectly, and I could easily see a 8-10% move in either direction tomrorow,

But expressing short-dated directional views in front of earnings is costly, with not a great risk-rward for instance if you thought the company would beat and raise, and NOT sell off the way ZM did earlier in the week, and oculd be up 10% tomorrow, then the Dec 4th weekly 235 – 255 call spread would cost $5.50 vs stock at $231.50. Risking $5.50, for a break-even at $240.50, up 4% and can make 6% of the stock price if the stock is up 10% in one day. That is NOT a great risk-reward. The options market is saying there is about a 20% chance that the stock will be above $255 on tomorrow’s close.

This is a great example of why we routinely steer away from short term trading into events using long options structures, you need to get a lot of things right to merely break-even, first and foremost direction, but also magnitude of the stock’s movement and timing.

For those with conviction though, risking what you are willing to lose, getting as near to the money as possible makes sense but understading if the stock is below or above your strike by just a penny on expiration the premium goes poof.