My Notes and charts:

Macro:  S&P 500 is up 13% and the Nasdaq is up nearly 38% on the year with less than a month to go in what has been one of the craziest years the world, let alone the market has seen in a long time. To combat the health and economic crisis the Fed went big starting back in March, avoiding depression and minimizing the length of the recession. Now a new economic team is coming in with the new admin, the head of the Treasury is the former Fed Chair, investors are betting that this will mean more fiscal stimulus in lockstep with easy monetary policy which should serve as a tailwind to risk assets like stocks. 3600 is a key level to watch for support, then 3400 which was the Feb high, and below that is the 200-day moving average which is closely watched by trend followers and just below the Sept and Oct lows near 3150. 14% above the 200-day is a historically high level…

Trade Idea #1: Bullish MSFT – The stock has consolidated over the last five months, spending most of its time between $200 and $220. This week Salesforce.com (CRM) announced a nearly $28 billion bid for Slack (WORK) the collaborative work software provider. This combination might prove to be a competitive threat for MSFT in the years to come, but not yet and the deal likely speaks to more of MSFT’s own collab offering Teams’ success.

The stock looks poised to break out in the new year 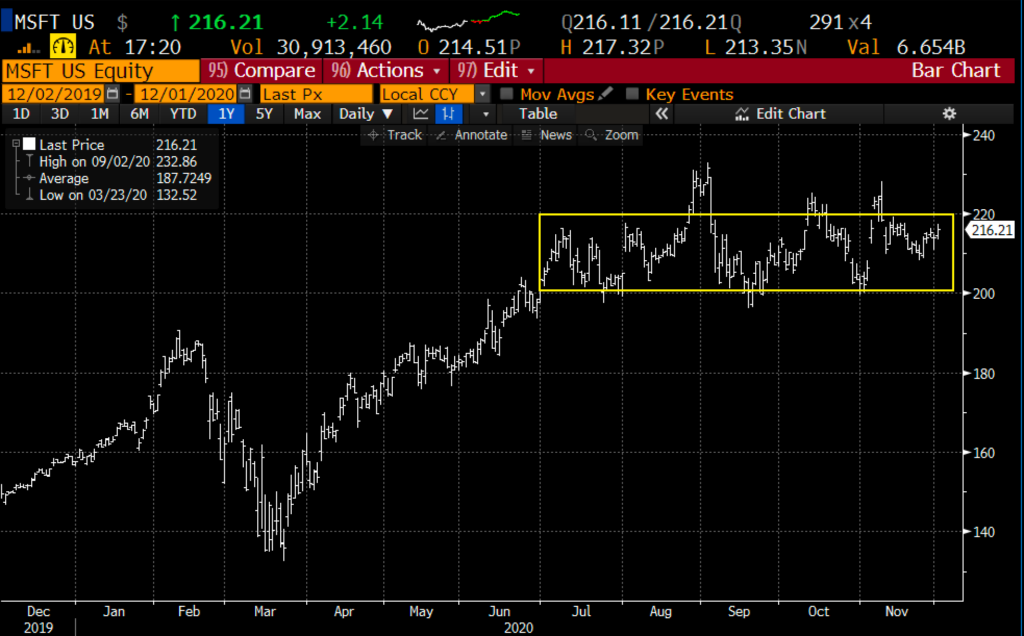 Short-dated options prices are as low as they were at the start of the year, highlighting the relative cheapness for those interesting in using options to express directional views while also defining their risk:

For those who are long the stock, have enjoyed gains that they could not have possibly imagined this quickly, do not want to sell in 2020 to incur a large tax bill on the gains, but want to define their risk to the downside might consider a collar, selling 1 out of the money call (vs 100 shares long) and using the proceeds to help finance the purchase of one out of the money put. The hedge structure allows for gains up to the short call strike, losses down to the long put strike but protected below, for instance:

Profits of the stock up to $660. At or above 660, 100 shares of stock (per 1 call short) would be called-away. If the stock is at or above $660 on Jan expiration you could always cover the short 660 call to keep the long position intact.

Losses of the stock down to 500 but protected below.

Rationale: collars make sense for long holders who are more worried above extreme near-term volatility to the downside over extreme upside, usually into an event like earnings. This hedge structure allows for the potential of $100 of gains (18% upside) between now and Jan expiration and only $60 of losses (11% downside).

The most important takeaway is that the skew towards calls is allowing for no cost defined risk allowing for far more potential upside than downside. 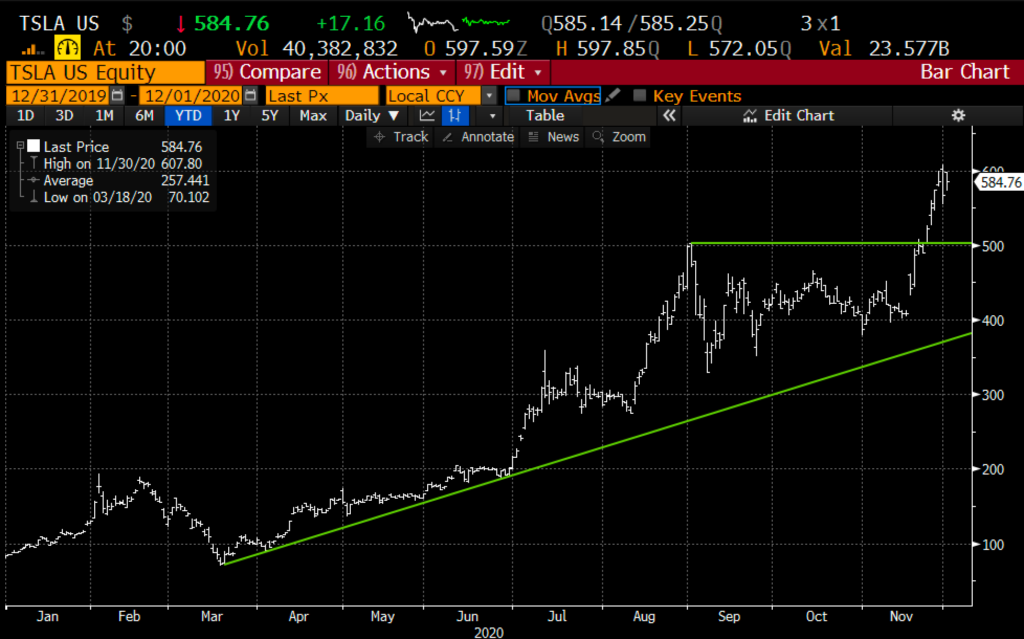 On Nov 18th I detailed a Bullish Trade idea on BABA when the stock was $254:

Today BABA is trading $261 and with a little less than three weeks to expiration, the Dec 235 put is offered at 90 cents. The option has a 9 delta, which basically means that it has less than a 9% probability of being in the money on Dec expiration. This trade idea has captured almost 80% of the max value if the stock is above $235 on Dec Expiration.

Action: I think it makes sense to cover the short put, booking the profit but also taking off the very low probability of a potential loss if the stock were to fall below $235.