As my good friend and fellow Fast Money panelist Guy Adami likes to say… “heavy is the head that wears the crown”… for the purposes of the conversation, I’ll add ‘market cap’ before the word crown. Of course, we will be talking about Apple (AAPL), which despite being down 17% from its all-time high made on Sept 2nd, the stock still holds the market cap title at $1.95 trillion, still well above both Amazon (AMZN) and Microsoft (MSFT) around $1.5 trillion with Alphabet (GOOGL) at $1.1 trillion and Facebook (FB) pulling up the rear in the F’MAGA complex.

For the most part, F’MAGA stocks trade heavy, especially relative to the S&P 500 (SPX) which the give make up close to 25% of its weight, with MSFT down 10% from its Sept high, AMZN and FB down about 13% from their Sept highs, while GOOGL is the only one in this group that made a new high with the SPX in the last two months, and is only about 5.5% from its all-time high earlier in the month.

At their highs the F’MAGA complex made up nearly $8 trillion in market cap, per Bloomberg, breaking the uptrend from the March lows, showing very poor relative strength to the broad market: 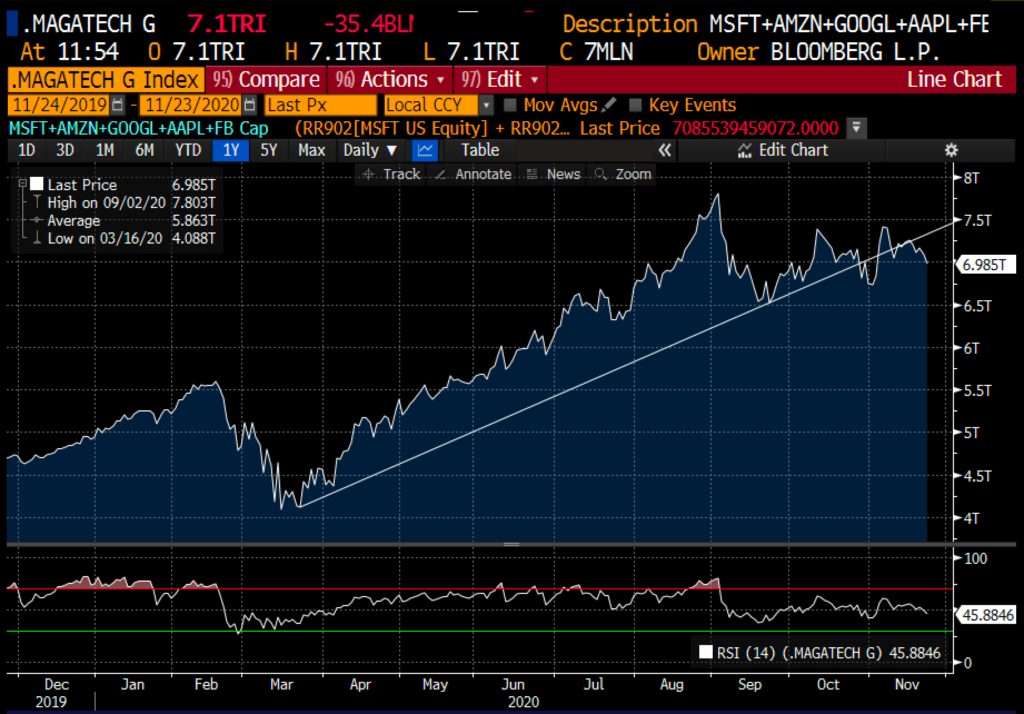 Back to AAPL, which is clearly leading the underperformance, despite making a series of higher lows since its late July FQ3 earnings gap, the stock has made a series of lower highs from its all-time highs. Last week on CNBC’s Fast Money I made the comment that it appeared that AAPL was poised to break out above that downtrend, but has momentarily failed and now seems poised to retest the uptrend near $110, with an air pocket below that if it breaks to the Sept low near $103: 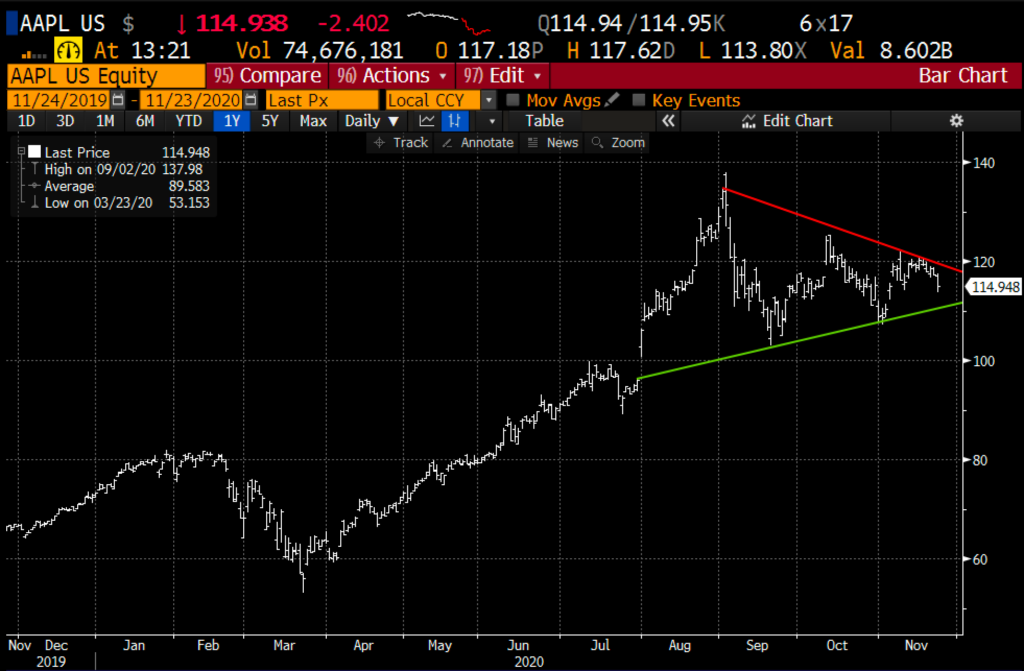 AAPL is up 56% on the year, and up 115% from its March lows. The stock’s P/E multiple has expanded massively, as the eps projections have come down while the stock price has gone parabolic. At 29x current fiscal 2021 eps that is expected to grow in the high teens, its valuation is trading at levels not seen since the financial crisis. 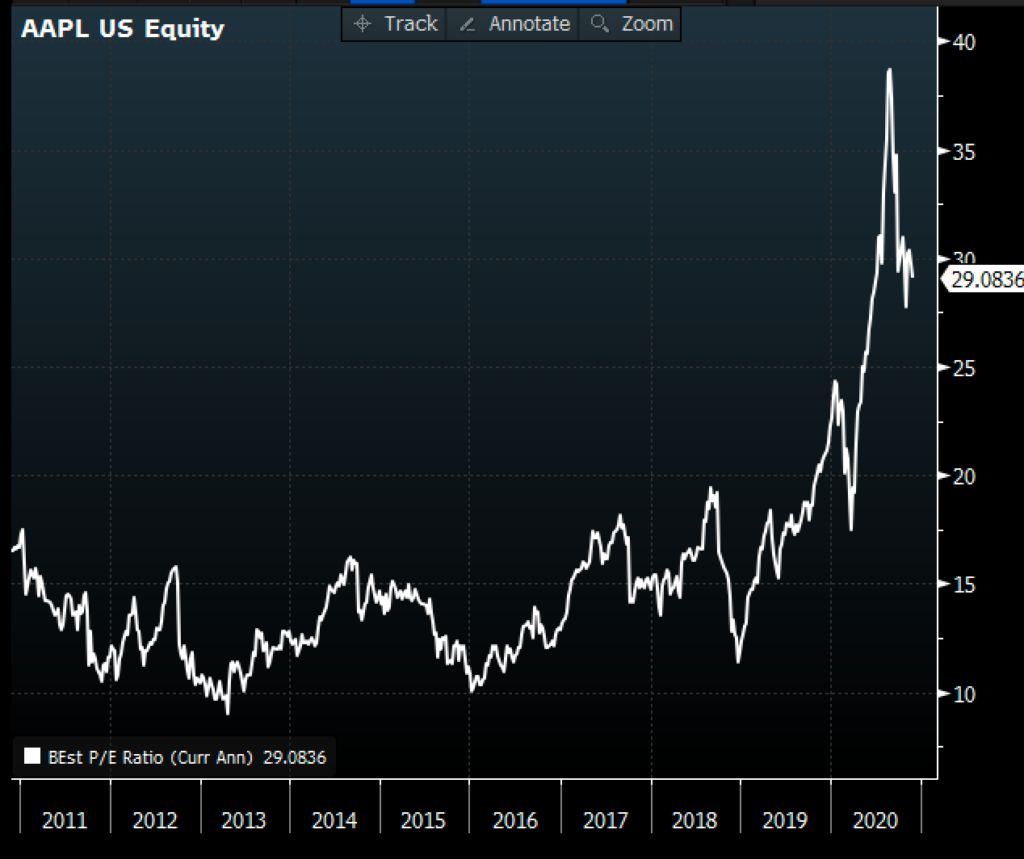 Fundamental investors comfortable with this multiple expansion are relying on the prospects for what they are calling a 5G upgrade supercycle that will cause hundreds of millions of consumers to upgrade old iPhones given the dramatic speed increases from the new technology. Further justification for the higher multiple is the increasing revenue contribution from Services or software subscriptions that have much higher margins than AAPL’s hardware products causing many investors to use a new blended multiple for the two businesses that are inexorably tied to one another. My view is somewhere in between, while AAPL has seen a benefit from the work and school from home trend this year that has seen an uptick in iPad and Macs, iPhone units have not been increasing, and the need for 5G speeds that don’t really exist at the moment might not be as necessary as most people are using wifi indoors, and we are mostly indoors these days or at least have far less travel time to work, school, ball games, movies, concerts, well basically everything. The 5G upgrade supercycle might be 2021 or 2022.

This is purely anecdotal, but I have bought every iPhone in the first month of its release since the initial one in 2007, this year was the first time that I bought the low-end model with the least amount of storage, resulting in the cheapest iPhone I have bought in a decade. Why? I don’t believe the carriers are going to have 5G service that lives up to the price point of the high-end phones and given my reliance on cloud-based storage etc I don’t need to pay an extra $100 per 128 GBs. This last bit is important, this how AAPL is able to make a good bit of their very impressive margins on the iPhone. Which might be stealing from peter to pay paul sort of situation as it relates to their services. And what about the company’s services business, last month when the DOJ slapped an antitrust suit on Google, there was some fairly astute analyst who highlighted one reason for the suit was the search company’s massive payments to secure Google as the primary search engine on Apple iPhones, per WSJ:

analysts and investors say losing that deal could be a sizable blow to Apple, given estimates that Google’s payments account for up to a fifth of the iPhone maker’s overall profit.

“There’s a risk, if you play it out, that there actually could be more financial impact to Apple than there is for Google,” said Toni Sacconaghi, an analyst for Bernstein. He estimates that Apple’s stock could fall as much as 20% if the deal with Google were to be eliminated entirely. At the same time, he and others say, any damage could be far less if Apple is able to offset it through other deals involving Google and its competitors, as many investors and analysts say could happen.

The companies have never made public the exact terms of the deal. Information about large payments from Google to Apple emerged in 2016 during an unrelated court fight involving the search giant, during which it was mentioned in court proceedings that Apple received $1 billion in 2014 as part of the arrangement.

The number grew sharply after that, analysts say, though they vary on its exact size. The government’s lawsuit points to public estimates that Google pays between $8 billion and $12 billion annually for the arrangement, and said it represents 15% to 20% of Apple’s profit.

Oh and the Upgrade Supercycle Tsunami…

The company in Sept introduced the very low-end iPhone SE, in Oct the high end 12 Pro and the 12, and in Nov the 12 Pro Max and the 12 mini (the one I bought). This staggered release schedule over 3 months, with 5 different physical sizes and 10 different colors, and 5 different storage sizes might have confused more than a few dozen million consumers, possibly not causing an initial rush before they can see them. Oh but wait, to see them means you need to make an appointment at an Apple store now that they are all available, this because we are in a pandemic.

This might make for a messy fiscal Q1 report in late January. Back in late Oct when the company issued their Q4 result and did not provide Q1 guidance investors shot first and asked questions later with the stock closing down 5.6% the next day, despite the company having generally optimistic commentary about the current quarter, per Barron’s:

Apple added 35 million paid subscribers to its service offerings on a combined basis in the quarter to 585 million, Maestri said. He said the company added 135 million subscribers from a year ago.

CEO Tim Cook noted on the call that the quarter overall was ahead of internal expectations, driven by better-than-expected performance for both the iPhone and services. He noted that the weak quarter for China was due largely to the lack of new iPhones in the period, but he added that non-iPhone hardware sales were up double-digits in China. Cook also said the company expects China sales to grow year-over-year in the December quarter.

I guess the point of this post was originally to highlight the relative underperformance of AAPL and its mega-cap tech brethren, but also to highlight some of the fundamental drivers of the AAPL story and how investors, have very recently taken a slightly cautious stance towards the stock. It is notable that options prices in AAPL are at their lowest levels since June when the stock was 30% lower, just breaking out to a new all-time high. The one year chart below shows 30-day at the money implied volatility (blue line, the price of options) at 30%, below 30-day at the money realized volatility (white line, how much the stock has been moving), above implied, suggesting that options prices appear cheap for those looking to express directionally views with defined risk: 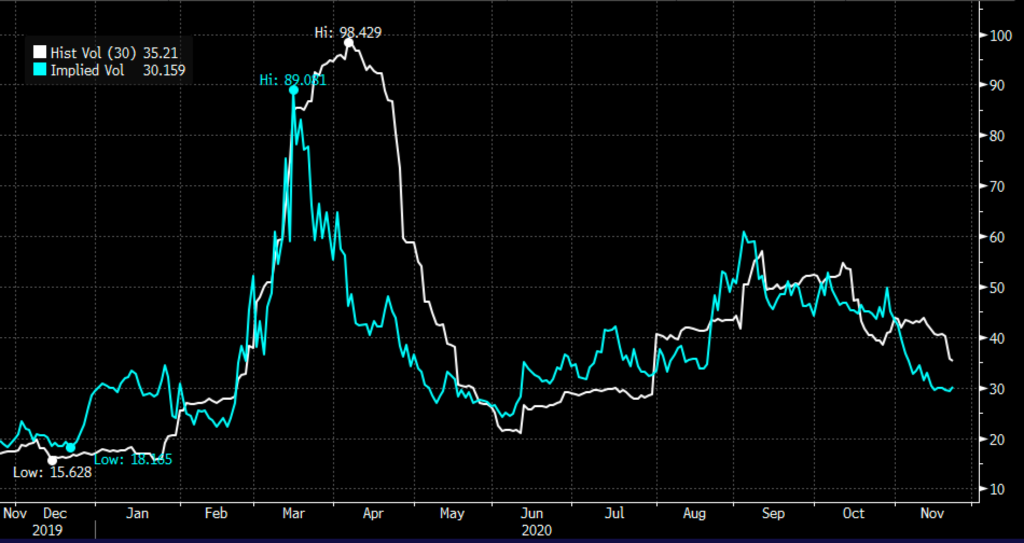 To highlight the relative cheapness, with the stock at $115 the Dec 31st quarterly 115 straddle (the call premium + the put premium) is offered at $9, $4.50 for the Dec 31st 115 call and $4.50 for the Dec 31st 115 put, implying a 7.8% move in either direction between now and Dec 31st, or a little less than 4% if you were inclined to buy an at the money put or the call possibly to hedge a long position or define one’s risk playing for the old Christmas Rally.