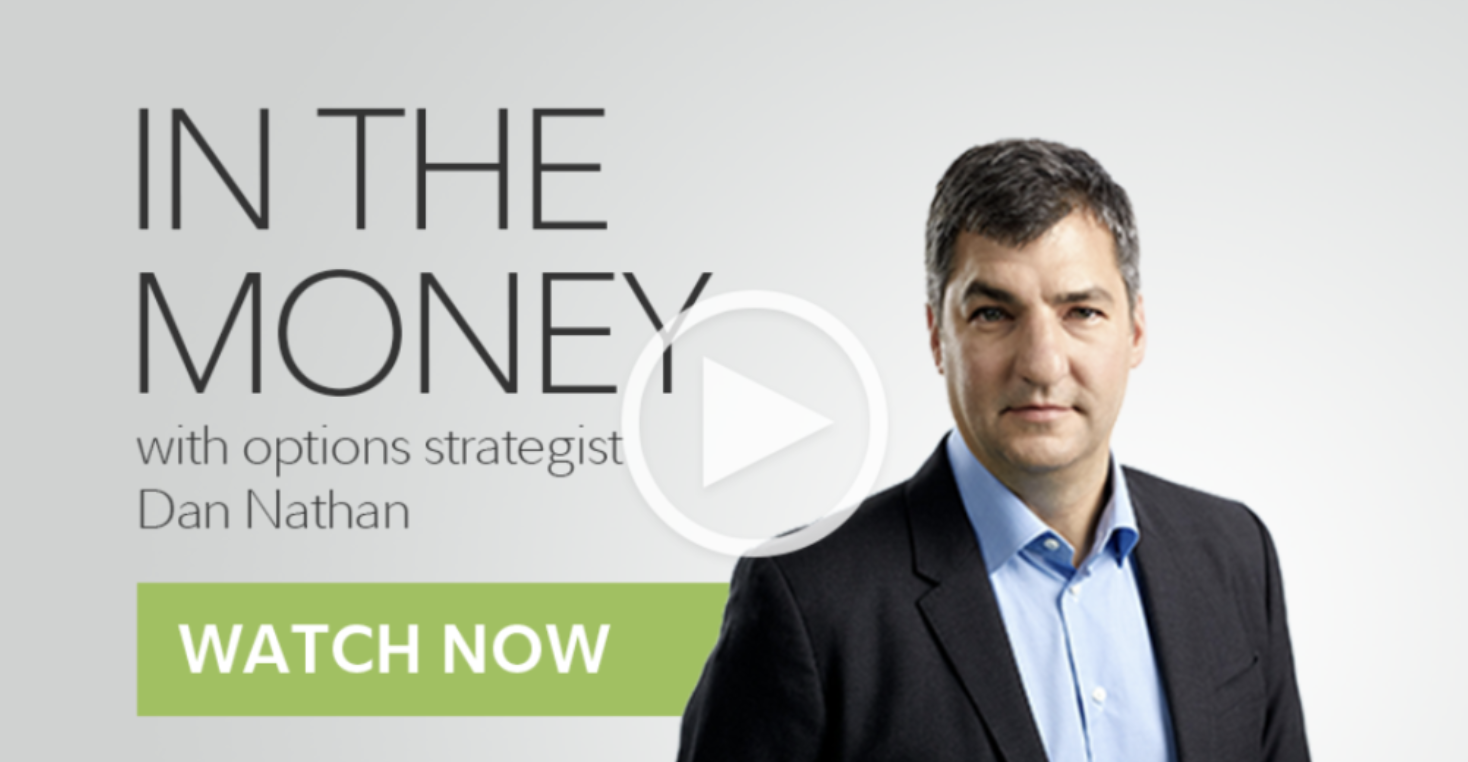 My Notes and charts:

Macro: S&P 500 up 10% in a straight line on the election result and vaccine news. The transition so far should instill little confidence in investors that the next few months will be normal and any disruption (like some sort of geopolitical mess) could push out the orderly dissemination of a vaccine, which Fauci said the other day will NOT be widely available until mid Spring / early summer.

Complacency very high, Virus is raging. death rate down, but mitigation efforts will take its toll on the economy, and there we are without further fiscal stimulus which might not come in the timing and size needed to get us to vaccine. 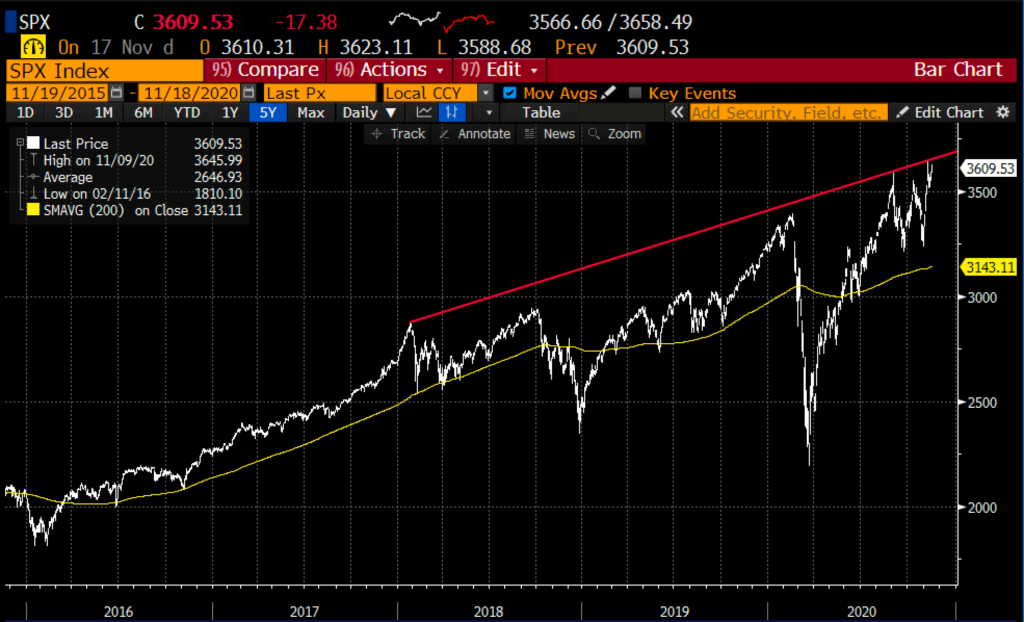 Trade Idea #1: Long Alibaba (BABA) – shares of the Chinese e-commerce behemoth are down 20% this month since Chinese regulators put the kibosh on the IPO of their digital payments arm Alipay last week. The stock is quickly approaching technical support near its early July Breakout level between $230 and $240. Aside from what is likely to be near-term regulatory issues, the Chinese consumer appears to be in good shape as it also appears that China is doing far better with the coronavirus and not suffering a second wave as we are in the U.S. If they were to I suspect the stock works either way. 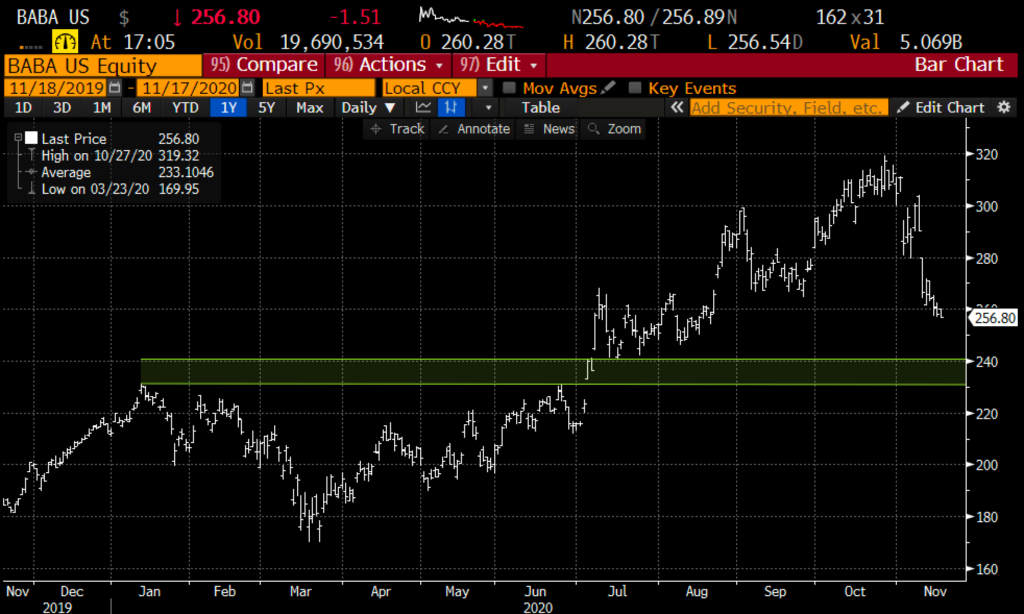 Rationale: for those looking for a good long entry in the technical support range over the next month, selling a put can be a great way to set a reminder, especially if you are willing to own the stock at the short put strike, less the premium received.

Trade Idea #2: Short US $ (UUP) etf that tracks the dollar. Back in Mid July when the UUP was trading at $26 I made a bearish case for the USD, now that it is below $25 I want to make another Bearish case for the dollar, but this time for different reasons. Rates have risen and the dollar is still weak, largely because the Euro has been rising, but so have Asian currencies and the British pound.

Break-even on March expiration, profits below $24.45

Rationale: this trade idea risks 2% of the etf price and breaks even down 2%. and allows 3 months for the idea to play out. 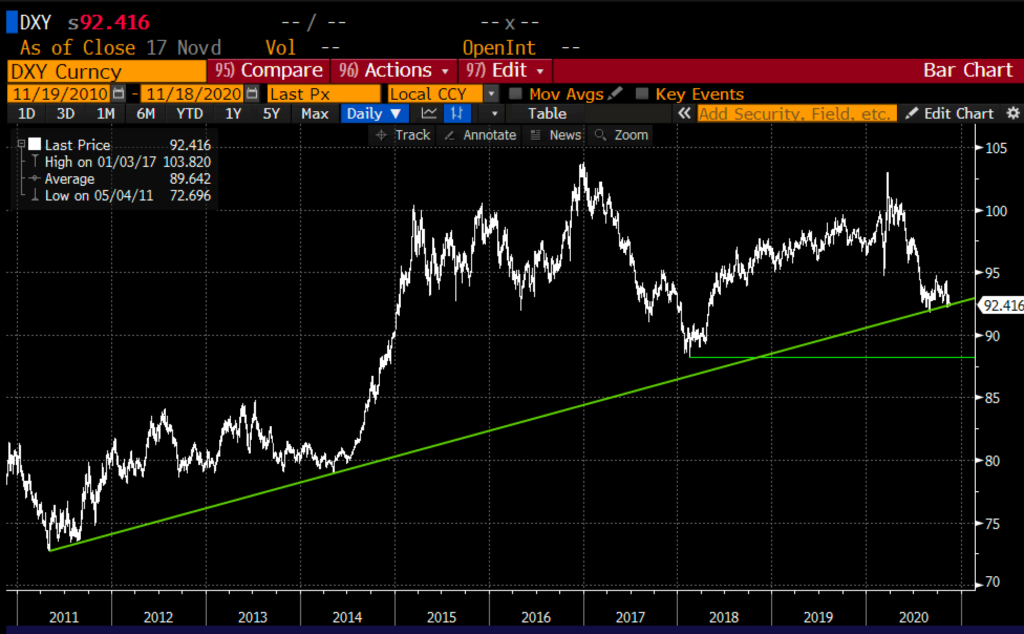 Lookback: On Oct 28th, prior to AAPL’s FQ4 earnings I detailed a hedge for long holders of the stock into the print:

Now with the stock at $119, the Dec collar is worth about 65 cents, meaning if you were to close the hedge you would pay 50 cents for it, vs paying nothing prior to earnings as the call you sold at $2.30 canceled out the premium paid for the put that you bought… the stock is $5 higher and the hedge only cost you 50 cents, it makes sense to close the short call for $80 so you don’t limit any upside between now and Dec expiration. 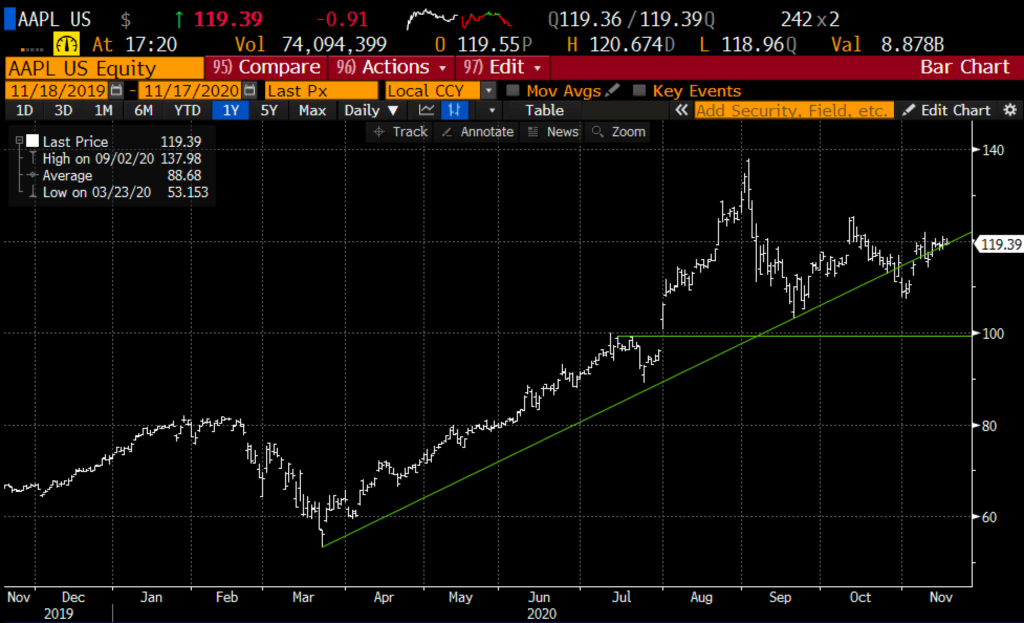