Alibaba (BABA) has concluded its Singles Day where the Chinese e-commerce behemoth registered their largest one day pull for this event even, topping $75 billion, but this week investors have been more focused on regulatory hurdles facing the company, per WSJ:

But growing regulatory pressure on a popular way that shoppers fund purchases on Alibaba’s e-commerce sites and new draft rules proposed Tuesday to curtail the influence of internet companies cast a shadow on the event—and the business model that has made the empire founded by entrepreneur Jack Ma a global force.

Since last week, when regulators halted the initial public offering of Alibaba-backed payment platform Ant Group, Alibaba’s New York-listed shares have fallen 16%—erasing $137 billion from its market value, according to Refinitiv data—reflecting in part investor concerns about a raft of regulatory actions.

In the last two weeks, shares of BABA have sold off 17% from an all-time high and are now flirting with the uptrend from its March lows. Below the uptrend, the next level of support is near $240, down about 10%, the breakout level to new highs in early July and also the stock’s 200-day moving average: 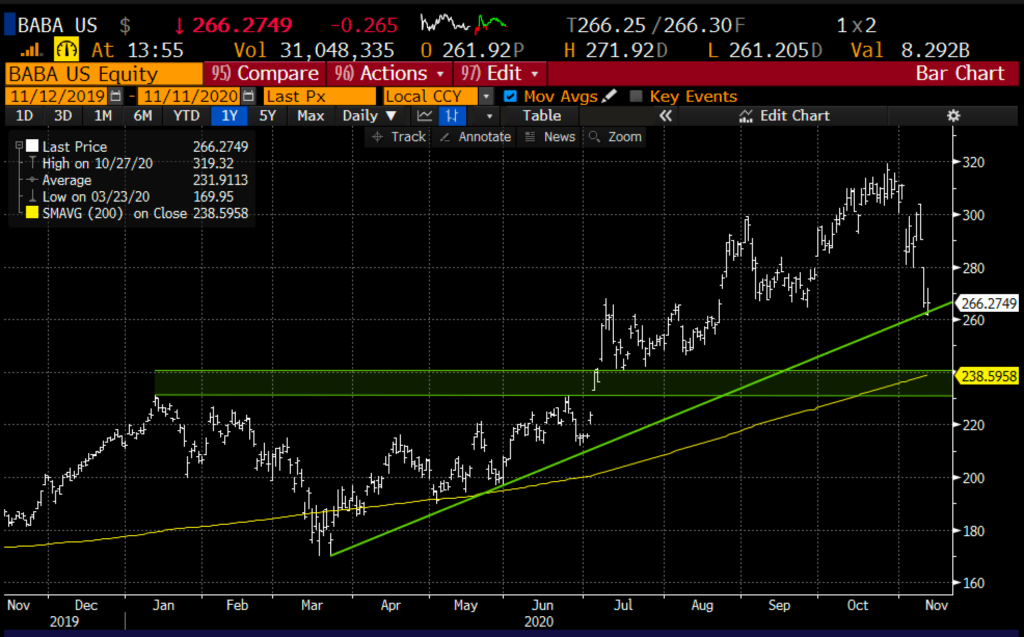 If you were of the mindset that the Chinese regulatory pressure was going to be short-lived and BABA will be able to realize their gains in Ant soon enough and that the stock might have some further downside near-term, but likely to find support near $240, then selling downside puts to finance the purchase of upside calls, a risk reversal might make sense in December expiration, for instance:

Losses below 245, put 100 shares on Dec expiration per 1 contract short below 245. can always cover to close as to avoid being put stock in this scenario.

Rationale: this trade idea makes sense for those looking to play for a bounce-back over the next five weeks to the prior highs, but are willing to suffer losses if the stock is down 8.25% on Dec expiration.