On Oct 14th on RiskReversal and In The Money with Fidelity Investments I detailed a bullish trade idea on Pfizer (PFE): 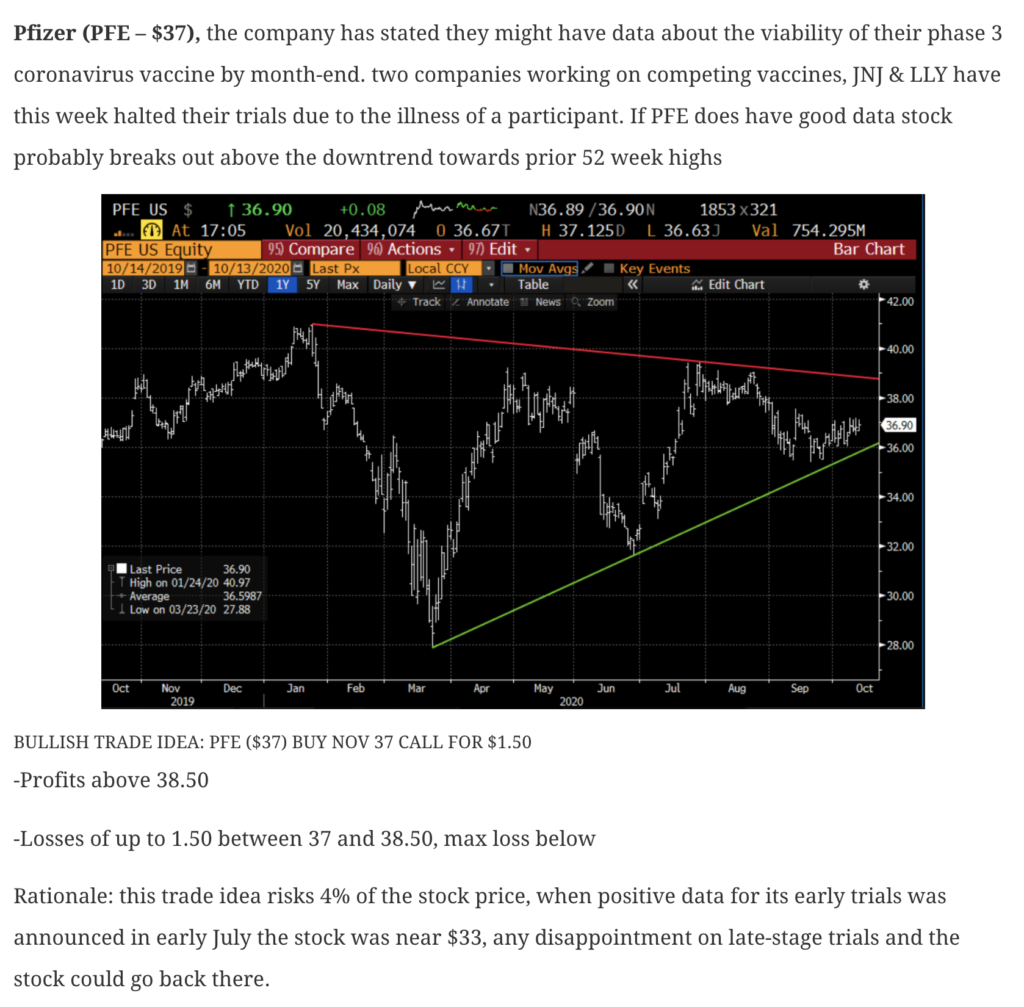 ICYMI, PFE announced some very good news on the development of their Coronvirus Vaccine that is in late-stage trials and the stock is up more than 10%, per CNBC:

Pfizer Chairman and CEO Dr. Albert Bourla told CNBC on Monday he believes the world “can see light at the end of the tunnel,” after the U.S. pharmaceutical giant announced its coronavirus vaccine was more than 90% effective in preventing Covid-19 for those who had no evidence of previously being infected.

More than 50 million coronavirus infections have been recorded worldwide since the virus emerged in China in late December, according to data compiled by Johns Hopkins University. At least 1,257,747 people have died. Nearly a fifth of all global infections and fatalities are in the U.S. The race to develop a safe and effective vaccine has been closely watched as companies accelerated a process that normally takes years.

“It is a great day for science. It is a great day for humanity when you realize your vaccine has 90% effectiveness. That’s overwhelming,” Bourla in interview with CNBC’s Meg Tirrell on “Squawk Box.” “You understand that the hopes of billions of people and millions of businesses and hundreds of governments that were felt on our shoulders. Now… I think we can see light at the end of the tunnel.”

Now with the stock near $40.40, the Nov 37 call that cost $1.50 on Oct 14th is now worth about $3.40 for a $1.90 gain. Let’s consider our options. First, you could always take the profit and move on. But, if you thought the stock could continue to move higher into year-end then you could roll up and out, for instance, sell to close Nov 37 call at $3.40 and buy to open the Dec 40 call for $1.90, equal to the profit of the original trade idea. This new trade breaks-even above $41.90 offering the potential to sell a higher strike call to make a vertical call spread in Dec if the stock were to continue to rally.