ICYMI, the S&P 500 futures had a heck of a night, with three 3% moves as investors traded the potential outcomes. 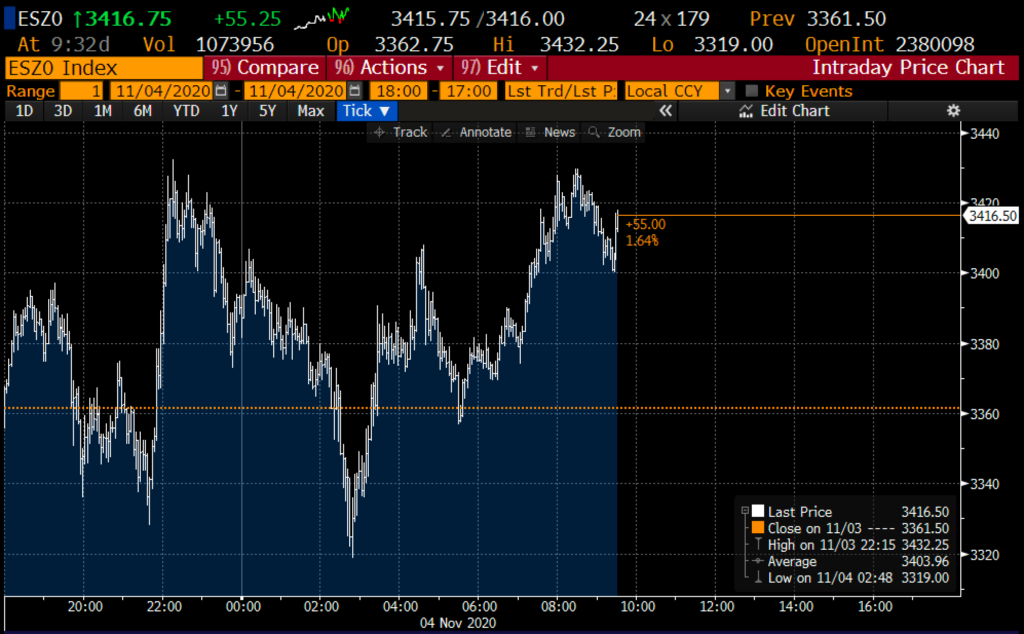 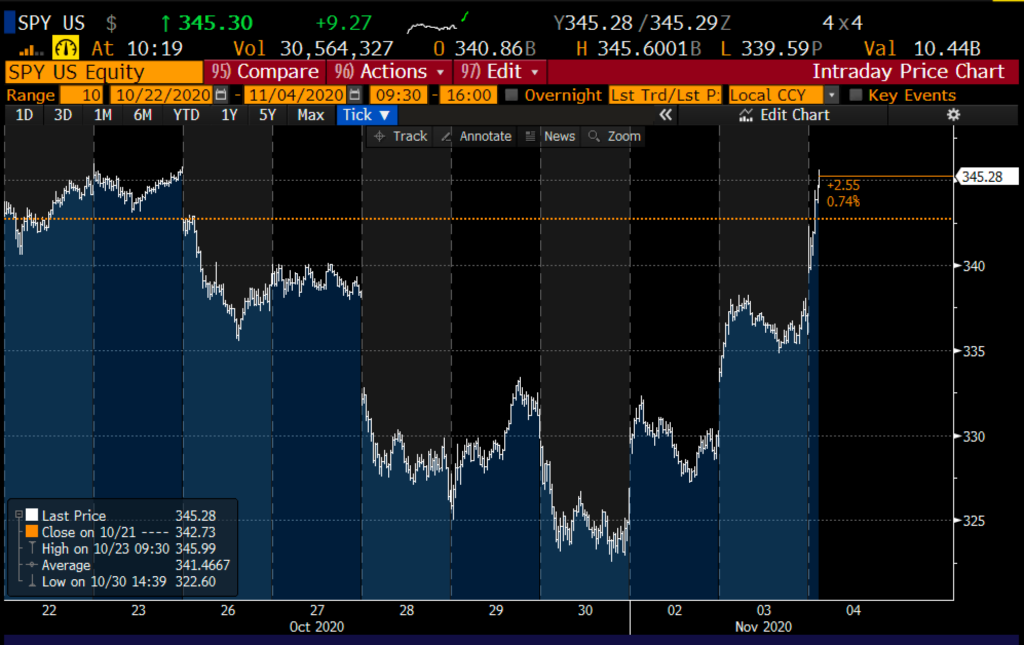 This tweet just a bit ago caught my eye from Economist David Rosenberg:

History back to 1980 shows that the initial move in the equity market after a national election proves to be the wrong move. Plus – do you think the rally in Treasuries is pricing in anything good on the economic front? The fiscal reflation wave is d-o-n-e.

This leads me to the chart of the SPX, which has been in a fairly well-defined range over the last two months between 3600 and 3200 with the Feb high near 3400 serving an important pivot point. What’s interesting to me about this morning’s gap that places the index above the intersection of 3400 and the downtrend from the Oct 12 high near 3550: 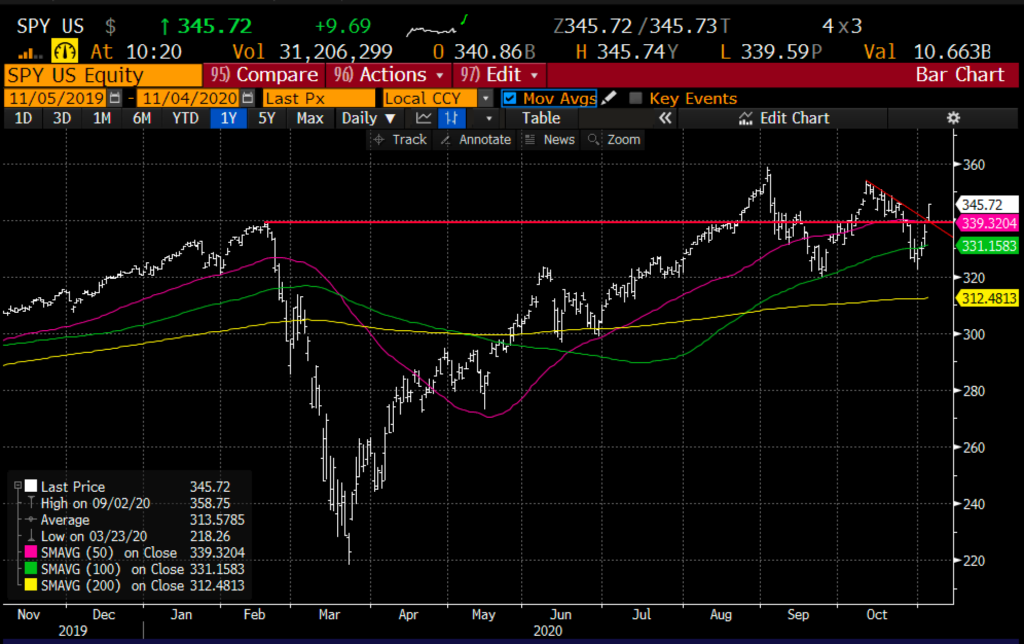 I am not a data scientist, or a political, scientist, but as it stands right now if Biden were to pick up just Wisconsin and Michigan, with the current state of the called states he would have the 270 electoral votes to win the election. trump will call for recounts, and challenge those results in court and for the race to be squarely put in Biden’s hands could take a couple of weeks.

Here is my conservative Electoral College Map assuming Wisconsin and Michigan go for Biden, he has 270, trump will not concede thie: 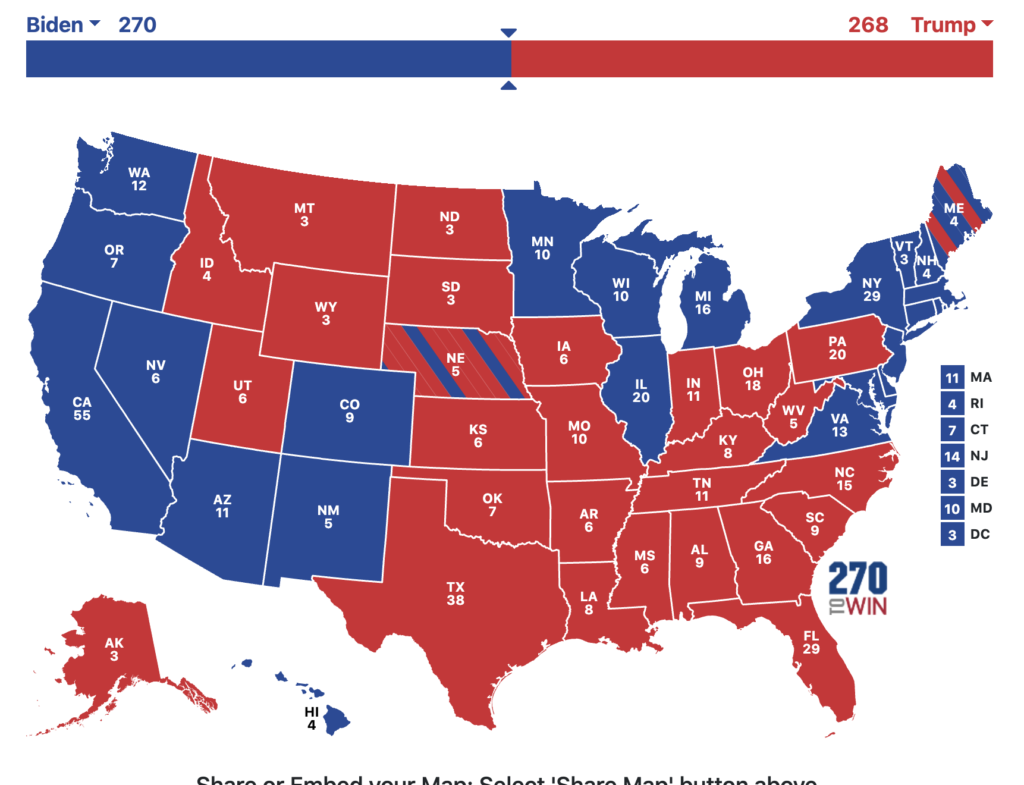 The market’s opening strength appears to be pinned on the likelihood that we will have a divided government, with the Rs keeping the Senate. Investors like the idea of a status quo. But if trump gets aggressive trying to delegitimize a Biden win (which might NOT happen legitimately), I suspect that outcome would cause the SPX to trade back towards last week’s lows near 3235.

With the VIX down 15% at 30 roundtripping its move from 30 to 40 over the last couple of weeks, this could present an opportunity to hedge short term risk of things getting really ugly in the near future: 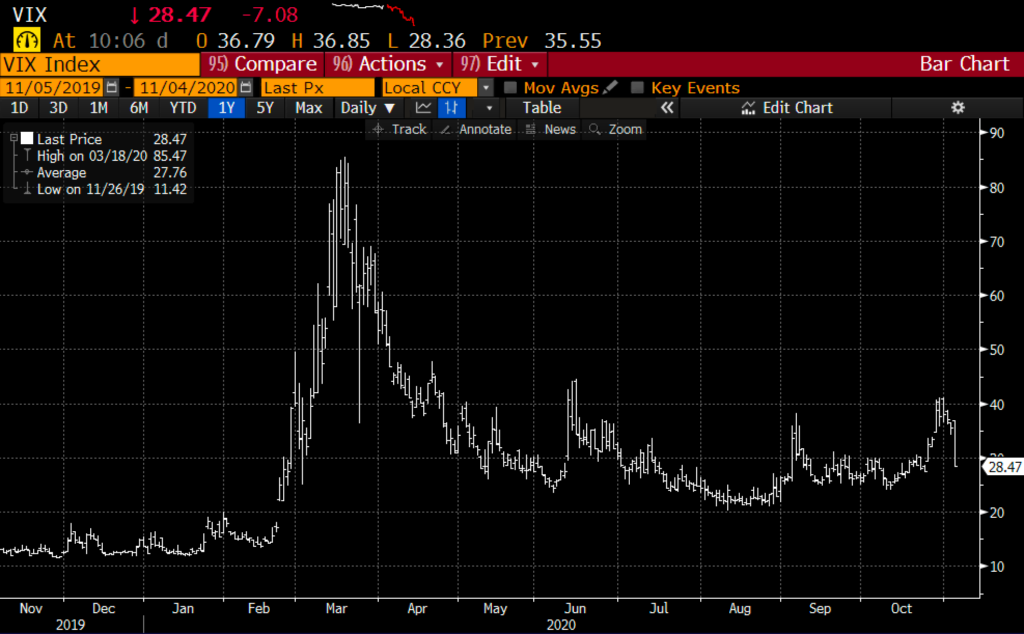 Short-dated options prices in the SPY (30-day at the money implied vol, blue below), the etf that tracks the SPX have come in hard, and nearly converging again with the 30-day at the money realized volatility (how much the etf is moving, white below) making options for those looking to pick a direction look cheap(ish).

If I were looking to play for a retest in the next few weeks of the recent lows just above 3200 I might consider a put spread in the SPY in Nov expiration: