On Thursday, Twitter reported its Q3 earnings, and the results were disappointing, to say the least with the stock closing down 21% the next day, and following through today, down another 5%, reversing all of the tock’s gains since mid-September.  You know the old stock market saying? That stocks take the escalator up and the elevator down, and that’s exactly what happened here.

Investors were particularly caught off guard by the lack of user growth, especially in comparison to Snap and Pinterest’s stunning results in the prior couple of weeks that prompted their stock’s to rip 28% and 27% respectively the day after their results.

CFO Ned Segal was on CNBC Friday morning highlighted the strength in their ads business, up 44% sequentially and up 19% year over year, and spoke to the point of investor discontent, monetizable daily active users (mDAUs) that only gained 1 million in the quarter which was horrid relative to peers like SNAP and PINS.

RBC Capital’s Mark Mahaney, who rates the stock a Hold with a $43 twelve-month price target note to clients Friday the main reason why he “remains on the sidelines” in the stock:

mDAU’s substantial slowdown despite some return of live sports and events indicates the peak may be behind us in terms of COVID-driven engagement. The question remains if TWTR can meaningfully expand its market penetration to support premium Brand Advertising growth.

On Thursday’s Fast Money on CNBC, I was less than enthusiastic about the results, but for my final trade, when the stock was trading down 17% from $52.50 to $43.50 I stated that wait until $40 if you are looking to Buy:

After a big day for earnings, the traders are looking ahead. Here’s what they’re watching first thing tomorrow. $SBUX $TWTR $TIF $CAT pic.twitter.com/Wnp5VZk3Pp

It is worth noting that in early August when the stock was $37.50 I was a buyer, for an eventual breakout above $40, which it did in a big way in Sept:

Here’s what the traders are watching first thing tomorrow. pic.twitter.com/Z1bvQNlKZq

And this came a little more than a month after I pitched the stock as a long on the show at $29.70:

.@RiskReversal says Twitter is a buy here. He lays out his case, but do you agree? $TWTR pic.twitter.com/p6O5doirg4

Ok so the stock is a mess, and has hit the level I suggested worth taking a look on the long side: 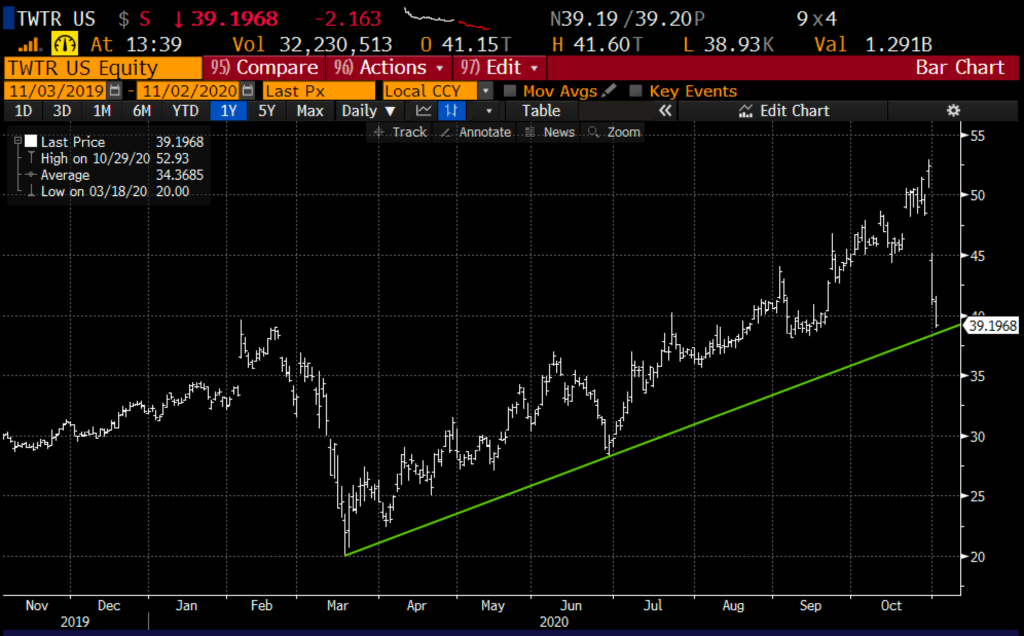 A break below that uptrend and the stock will be headed back to the mid $30s, which is why I think it makes sense if looking to be contrarian to define one’s risk. Why be contrarian? Well for one, the first half of this year saw a tremendous pull forward and users during the pandemic, despite the lack of events, these users were very engaged given the time on their hands. Second, the company has a great balance sheet and if it is product innovation they need to attract new users, with their more than $7 billion in cash, they can build and buy. Investors will be looking for product innovation guidance at their Feb 25th analyst day, which the stock could run ahead of as rumors will definitely leak prior. And third, the stock has gone too far to fast to the downside and could find support at its uptrend and ultimately fill in this weeks gap, consider defining ones risk with call spreads in Jan expiration:

Rationale: this trade idea risks 6.5% of the stock price, has a break-even up 9% and a max gain of 19% of the stock if it is up 25% in more than two and half months on Jan expiration.