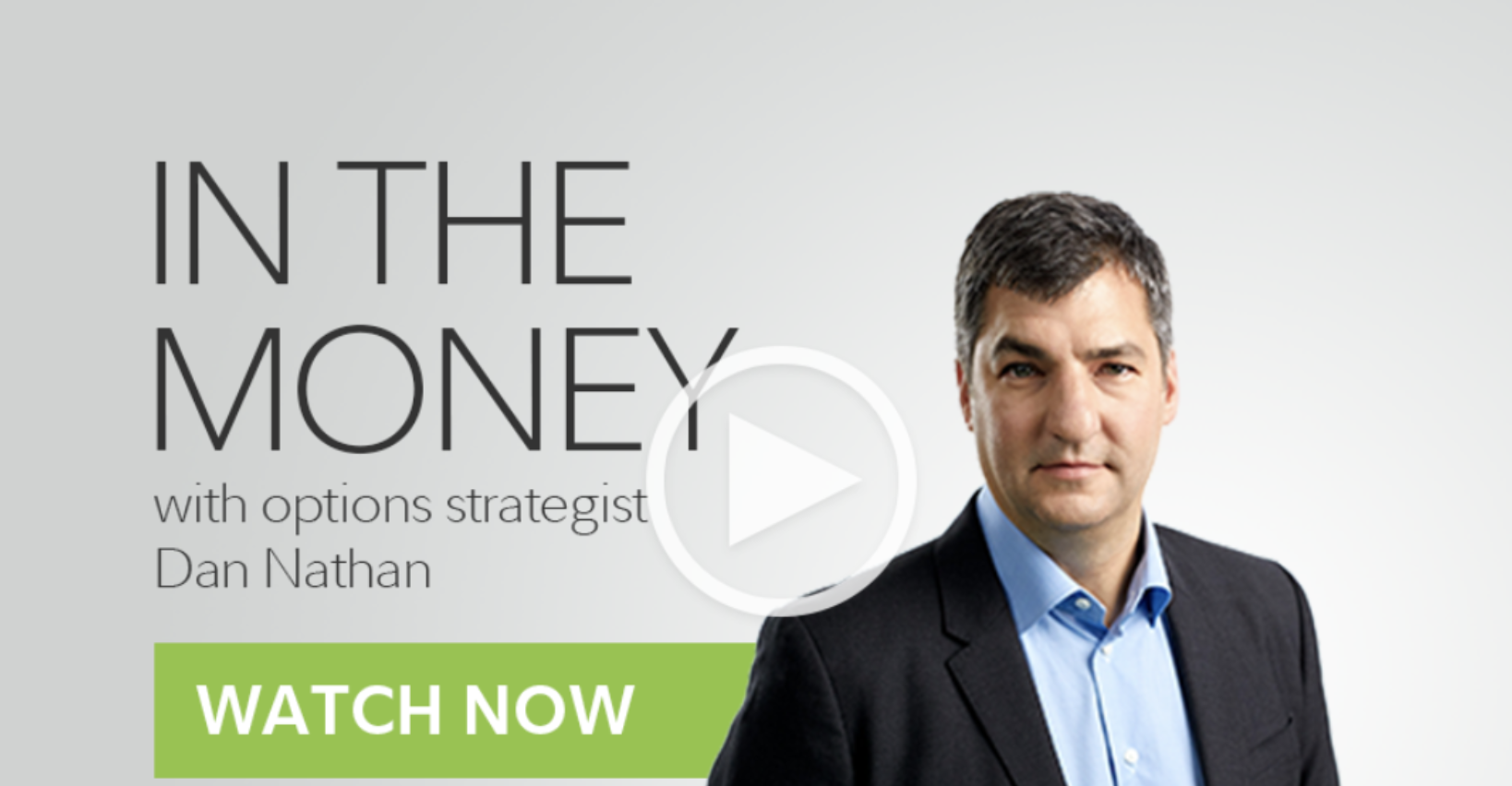 1) The election we should know the outcome by the end of next week. This should determine the speed that we get added fiscal stimulus and the likelihood of higher corporate taxes, capital gains taxes, and increased infrastructure spending.
2) Q3 Corporate Earnings will pretty much be done by the end of this week. We have seen financials, homebuilders, and Energy stocks all respond very poorly to their results. Are good results already baked into the cake for mega-cap tech stocks, on Thursday Apple, Google, Amazon & Facebook all report, or nearly 17% of the SPX and 35% of the Nasdaq 100.
3) The Virus remains unknowable that will likely be with us for some time. While there has been some encouraging news on the mortality rate of the virus of late, vaccines can not come soon enough as hospitalizations are rising rapidly with cases spiking to their highest levels since the start of the pandemic. What sort of mitigation steps will be taken as we head into the winter and what sort of drag will it be on the economy if regional lockdowns take place at a time where tens of millions of Americans are receiving some form of unemployment assistance despite the fact of no new fiscal stimulus likely until next year?
_________________________________________________________

The S&P 500 is up 3% on the year, and down about 7% from its all-time highs made on Sept 2nd, it has come a long way from its depths in March, up 52% after its one month 35% plunge from Feb to late March. The etf that tracks the SPX Index is trading today below a sort of battleground level, the Feb high before the plunge. The range is well defined the recent all-time high just below 3600 and the recent late Sept low near 3200. 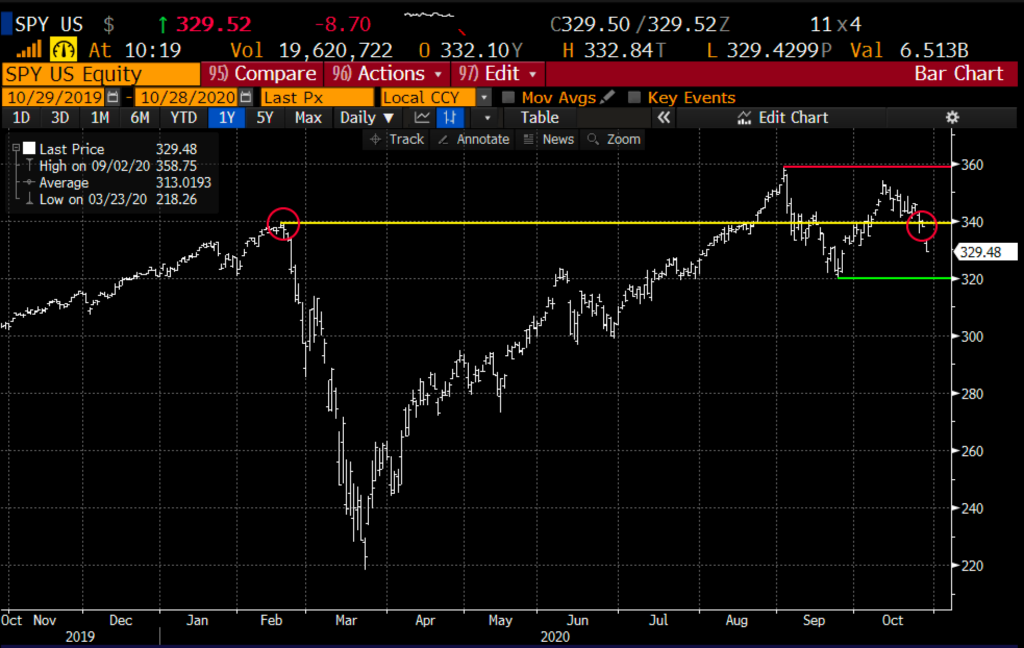 Why Hedge? So much we don’t know, about the election and the course of the virus and what it means for the economic recovery at a time when there will not be added fiscal stimulus possibly for months, which could both spook stocks no matter who wins the election.

AAPL will report fiscal Q4 results Thursday after the close. The options market is implying about a 5% move in either direction on Friday.

Long holders who do not want to sell their stock, but are more worried about downside associated with their earnings/guidance and post-election volatility should consider collars, selling 1 out of the money call (per 100 shares long), and using the proceeds of that sale to help finance the purchase of a downside put, essentially limiting potential upside in the sock between now and the chosen expiration to the short call strike, but also limiting losses in the stock down to the long put strike, for instance:

Profits of the stock up to 130, if the stock is 130 or higher on Dec expiration the investor’s stock would be called away, but the investors can always buy to cover the short call to keep the long stock position intact.

Rationale: an investor would collar their stock into an event like earnings, or into a period of uncertainty like the post-election days/weeks if they have gains they want to protect down to a certain point and they are more willing to give up potential gains in place of having defined risk to the downside. 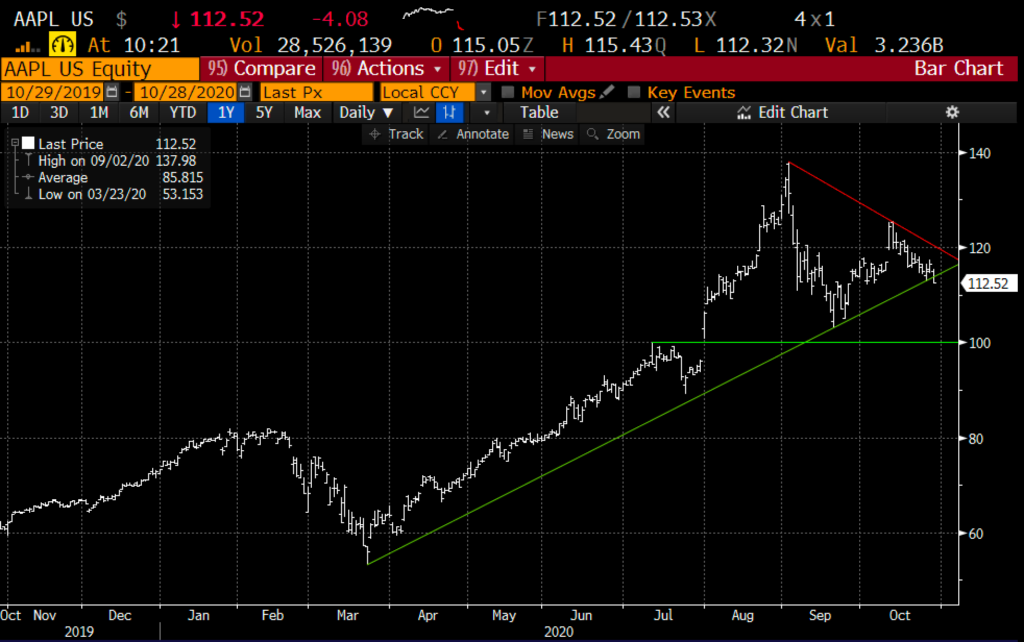 The stock broke down after disappointing earnings guidance last week, the put spread that cost $3 when the stock was $103 is now worth $7 with the stock near $93 and 3 weeks to expiration…

I would take the profit as the position can only be worth $10 on Nov expiration, or roll the position down and out playing for lower lows. 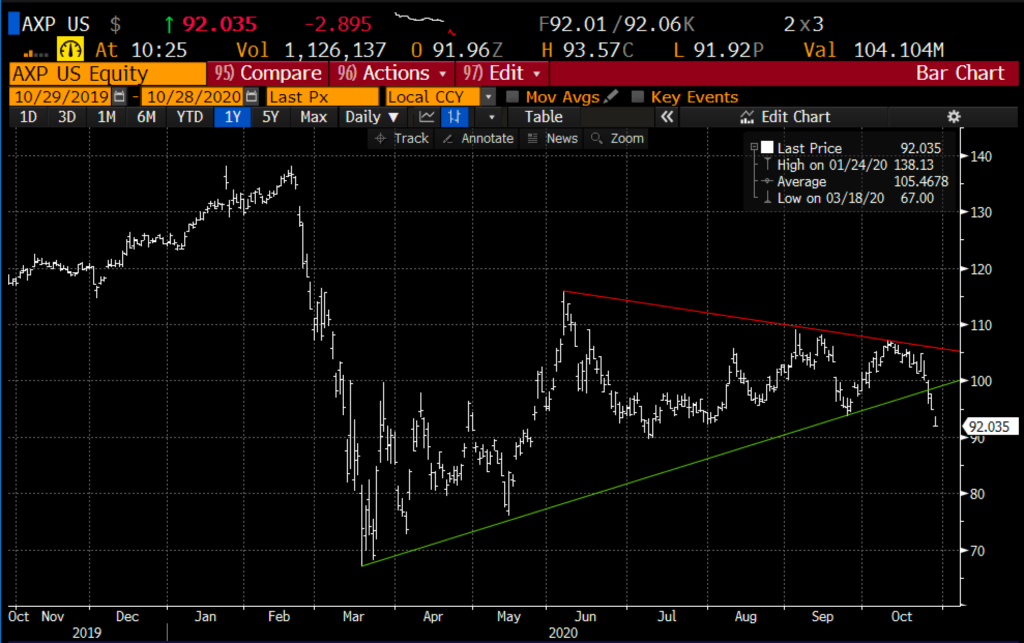