Twilio (TWLO) will report its Q3 earnings today after the close. The options market is implying about an 8% one day move tomorrow or about $25 in either direction, which is shy of its 12.5% average one-day post-earnings move as a publicly-traded company since its IPO in 2016. Looking at the far right column you can see some of the one-day post earnings price movements, the one that sticks out is the 40% gain following Q1 results in late May.

It is worth noting that the 40% rip came at a time where investors were just a tad offsides on some of the underlying trends in tech given the lack of visibility on the effects of the pandemic on consumer behavior and changes in the workplace. Near term, the stock has technical support at the intersection of the uptrend from its March lows and the downtrend from its then high in August around $260 with technical resistance near its recent all-time high of $340: 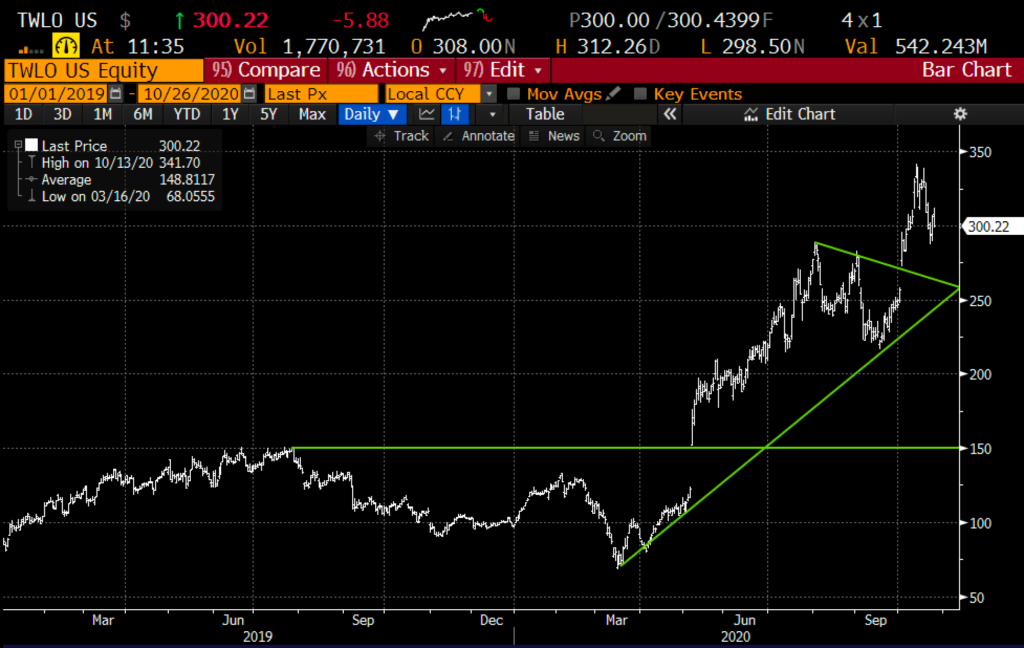 Shares of TWLO are up 200% on the year, sporting a $45 billion market cap for a company that loses money on a GAAP basis, who’s expected sales growth of 45% this year to $1.6 billion is expected to decelerate to about 28% for the next two years. TWLO trades at 28x and 22x expected 2021 & 2022 sales respectively and is not expected to reach GAAP profitability until 2024.

Wall Street analysts are overwhelmingly positive on the stock with 22 Buy ratings, 4 Holds and only 1 Sell with an average 12-month price target of $340, near its prior high.

One reason for the relatively low implied move for tomorrow’s earnings (relative to past moves) is the fact the company pre-announced better than expected Q3 results, per Barron’s:

the company expects September quarter revenue to be above its previous guidance range of $401 million to $406 million. The company also said it expects to generate organic top-line growth of at least 30% a year for the next four years. That suggests Wall Street analysts’ financial models for most of those years were far too conservative.

The company also said it expects long-term gross margins of 60% to 65%, and operating margins of 20% or better.

The focus will be on Q4 guidance and anything analysts and investors can glean about 2021.

For long holders, it might make sense to consider playing some defense. Its worth noting that Fastly (FSLY) has not seen an uptick in two weeks since its mild guidance disappointment, and this could become a trend in highflying, high valuation names, especially if next week we see that 2021 will have a Dem White House and Senate that will likely mean higher capital gains taxes going forward: 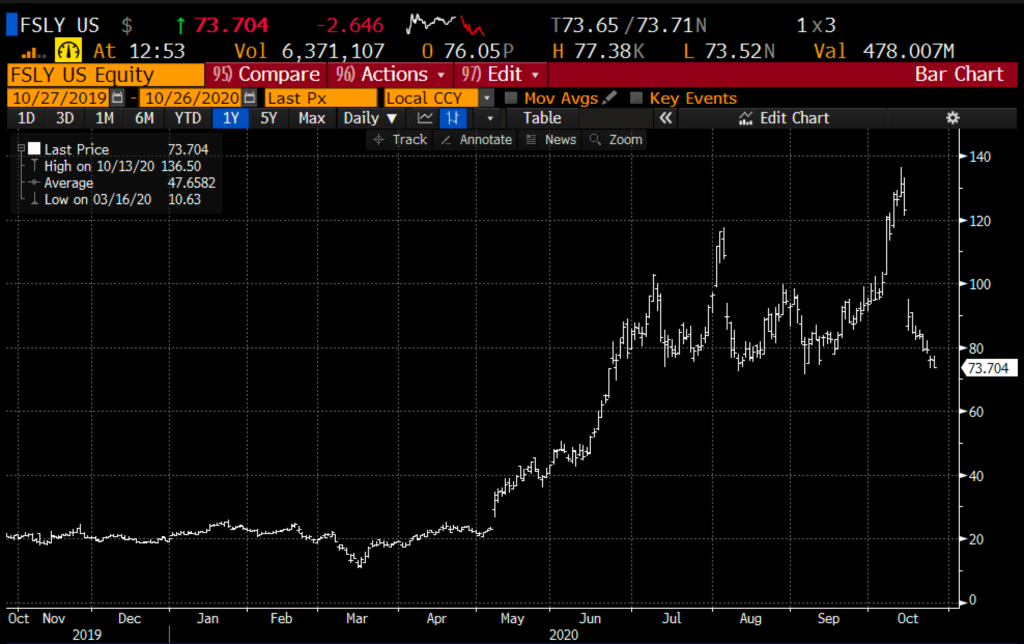 Rationale: the investor would only do this if there were looking for a dollar cheap way to define their risk to the downside for the next few weeks post earnings and were willing to give away upside above $40 from current levels to have defined risk down $30. If the stock is at or above $340 on Nov expiration the long holder could keep the long position intact by buying to cover the short call. If the stock is between 270 and 340 the collar will expire worthless and the investor will have spend $1 for the hedge. If the stock is at or below 270 on expiration the investor needs to make a decision to let their stock be matched off with the long put or sell the long put to keep the long stock position intact.

Or for those with conviction on a sharp move higher, at least in line with the implied move the at the money put or call would cost you about $12.50, or half the implied move or about 4%.  But Ill offer my normal disclaimer on weeklies, you need to get a lot of things right in a short period of time to merely breakeven, most notably direction and magnitude of the move. While the weekly at the money call or put are $12.50, the Nov 20th expiration is about $20 each, or about 6.5% of the stock price, while that allows for more time for your directional view to play out, they are also inflated in vol terms as they catch earnings…