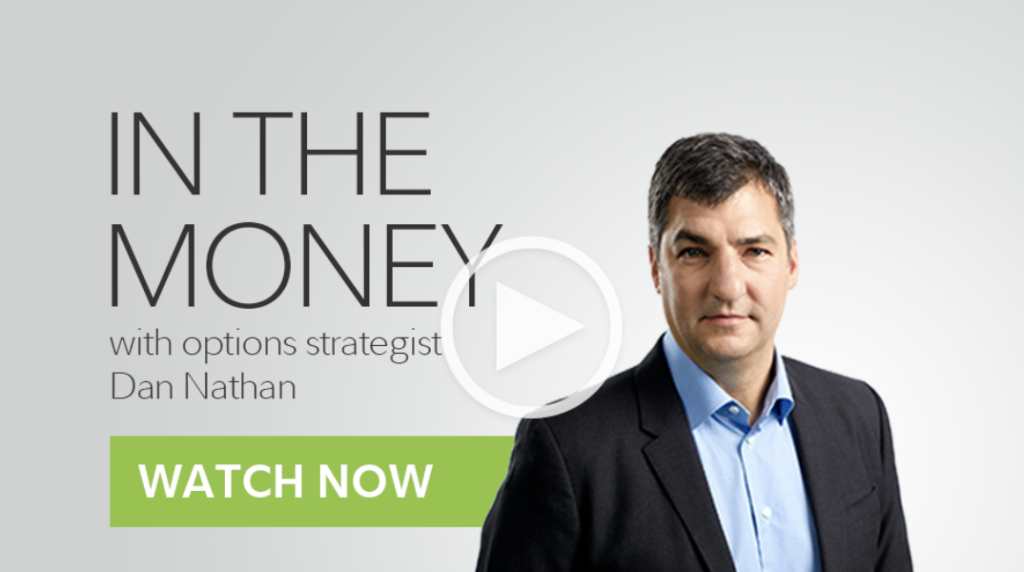 Macro: Stock market Investors clearly want Congress and the White House to agree on a fiscal stimulus deal this week or it will likely have to wait until after the election. Even if a deal were announced it would still take weeks to get to those in need and we could see a sort of “sell the news” as the focus will be right back on the election outcome. 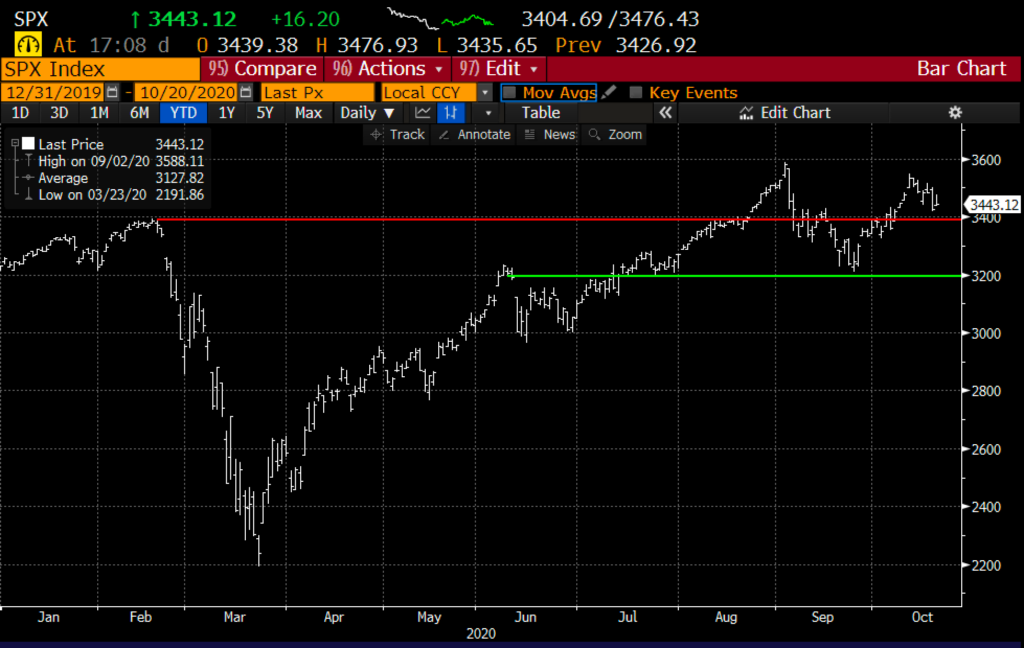 I have two defined risk trade ideas, one that works well if there i further stimulus in the weeks to come, and one that makes sense for a pushout, but each is not dependant on stimulus as they both have catalyst specific to them.

Shares of NFLX are down 7% after disappointing last night on Q3 subscriber additions, putting their Q4 guidance in doubt. the company had a record first half as it relates to gaining new subs due to the pandemic, but they have pulled forward a ton of demand. Are we likely to see the same in SPOT when they report next Thursday, Oct 29 before the open?

SPOT is up 75% on the year, and up 140% from its 52-week lows made in March. Since making a new all-time high in July after its monster breakout in June the stock has made a series of lower highs and lower lows. The downtrend would get you near the $200 breakout level which happens to be very near its 200-day moving average: 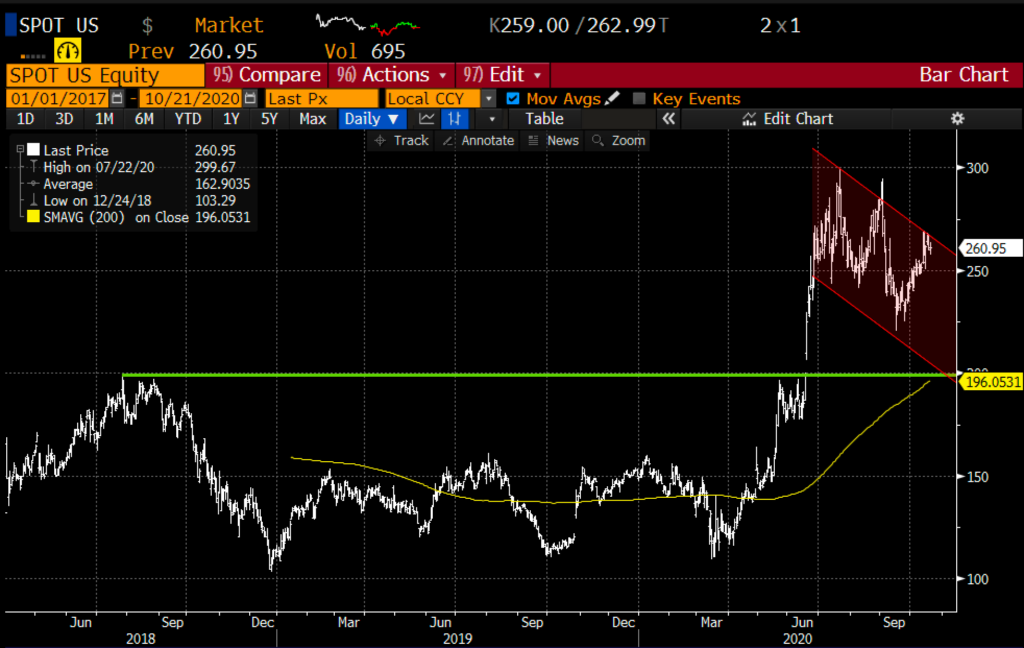 SPOT is a great company with a great product, but they still lose a lot of money, expected to lose $535 million in GAAP net income this year on $8 billion in sales, growing only 81% yoy, not expected to be profitable until 2022.

Losses of the stock below current levels but the $11.50 in premium received for call sale will serve as a 4% buffer to the downside.

AXP reports Q3 results Friday before the open. The options market is implying about a 3.5% one day move, or ~$3.85 in either direction, which is rich to the average one-day post-earnings move of about 1.5% over the last four quarters.

The stock is down about 17% on the year and about 25% from its all-time highs made in Feb.

The chart has a lot of tension building. Potential for a re-test of Sept lows if the company disappoints on earnings and guidance 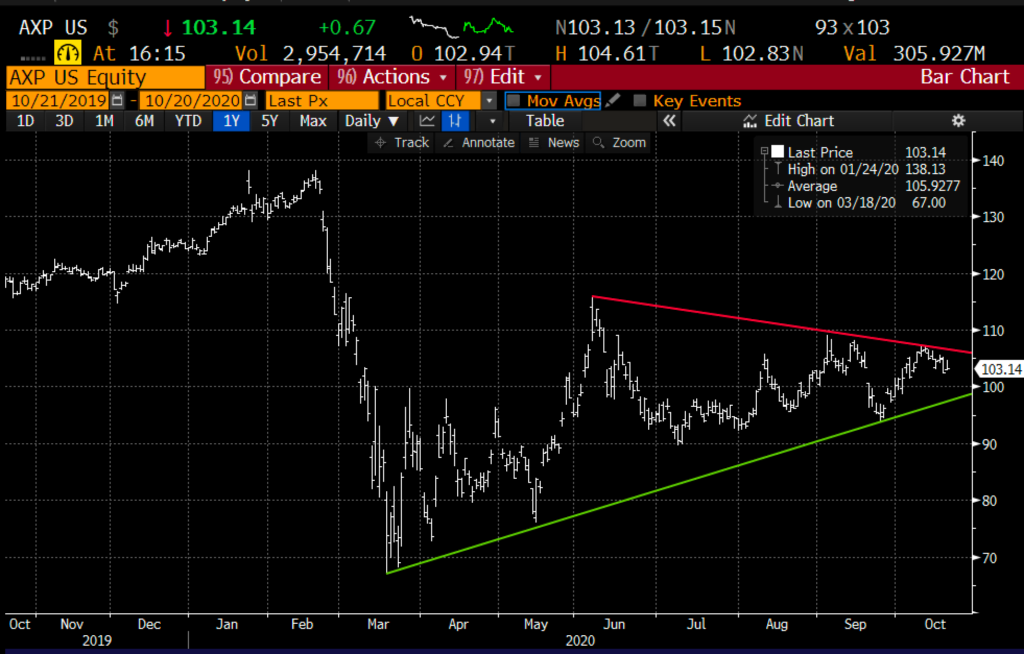 Now with the stock $151, the Nov call spread is offered at $2…  if the stock stays below 155 it will continue to decay into Nov expiration.