I highlighted the relative outperformance in Morgan Stanley (MS), the likelihood of a strong Q3, and my optimism about the closing of their E*Trade acquisition and the recent offer to buy fund manager Eaton Vance. This morning MS’s report sparked this headline in the WSJ: Morgan Stanley Powers Through Coronavirus Recession With Higher Profit, Revenue, highlighting:

a 20% rise in trading revenue and a 118% rise in stock underwriting. It is a smaller player in debt placements and big commercial loans.

The firm’s return on tangible equity, a measure of how profitably it puts shareholders’ money to use, was 15% for the quarter, hitting a target Mr. Gorman set earlier this year, before the pandemic crushed the global economy.

The firm set aside $111 million for loan losses, more than a year ago but about half of its provisions in the second quarter. Unlike peers where lending has stalled or fallen during the pandemic, Morgan Stanley’s loan book grew by 6% from a year ago, prompting one stock analyst on Thursday to ask Mr. Gorman what risk might be lurking and “how you’re getting what others are not.”

Bank stocks would certainly be perceived as beneficiaries of further stimulus as it would likely stave off a good bit of defaults and bankruptcies that banks are holding and have been increasing reserves to cover. Going forward with MS’s balances from their Etrade division and of course Eaton Vance, a steeper yield curve would certainly benefit their margins. The spread between the 2yr Treasury and the 10yr Treasury above 60bps is at the highest it has been in months, helping to give large money-center banks a slight bid. If MS is able to demonstrate tight cost controls, and their commentary regarding loan loss reserves is decent, I could see the stock breaking about above $50 on its way to the low-end of its technical resistance level near $55.

Shares of MS are up 1% in a down tape, the stock remains in its consolidation of the last few months, which I think sets up nice for a retest of the Sept highs soon and possibly a run back to its all-time just below $60 from early 2018: 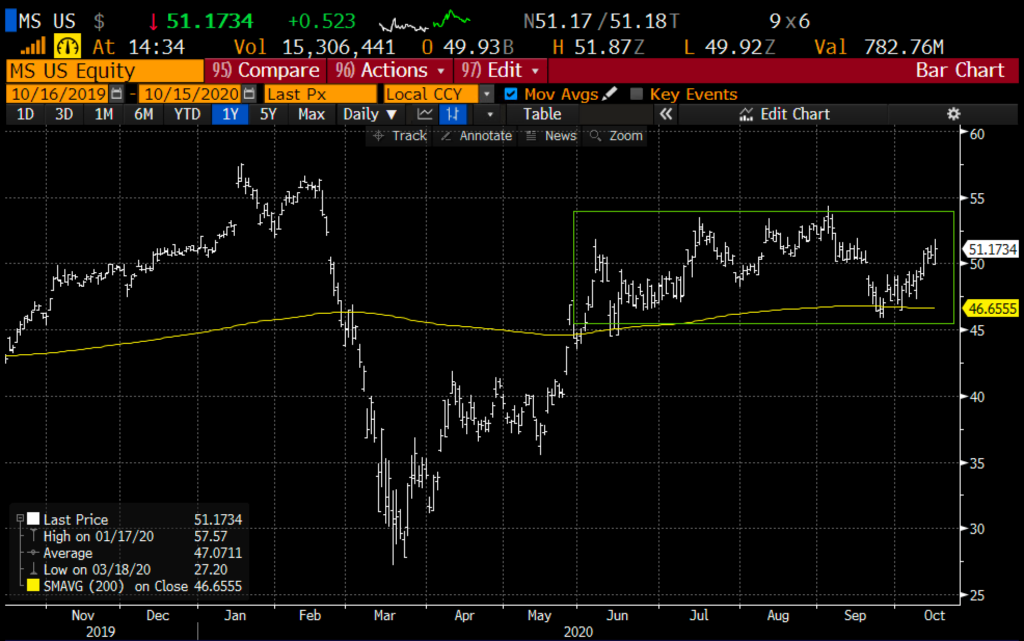 But as I highlighted in the note last week, a few things need to come together for new highs in names like MS in the coming months:

In my opinion, three main drivers for banks to play some catch up to the broad market, and then a name like MS to keep leading in the group, 1) Stimulus deal, and soon, 2) Election, clear win and not contested, 3) progress on therapies and vaccine that helps to reopen the economy, allowing banks to release some of their reserves and get back to buying back stock.

In the clip from Fast Money I also mentioned that is good as MS looks technically, BAC looks horrid. For those of you who think technical analysis is just some hocus pocus, look at the one year chart below of BAC. Since the March lows, up until mid-last month, BAC held that uptrend like a boss, making a series of higher lows. But unfortunately, the series of lower highs in June and then Aug, both times failing at the stock’s 200-day moving average suggested that upward momentum was waning. The breakdown last month was decisive, the re-test of the uptrend (which was prior support, has now become resistance) was textbook, and the failure there suggests that it might serve as meaningful technical resistance as it is also the intersection of its 200-day moving average. 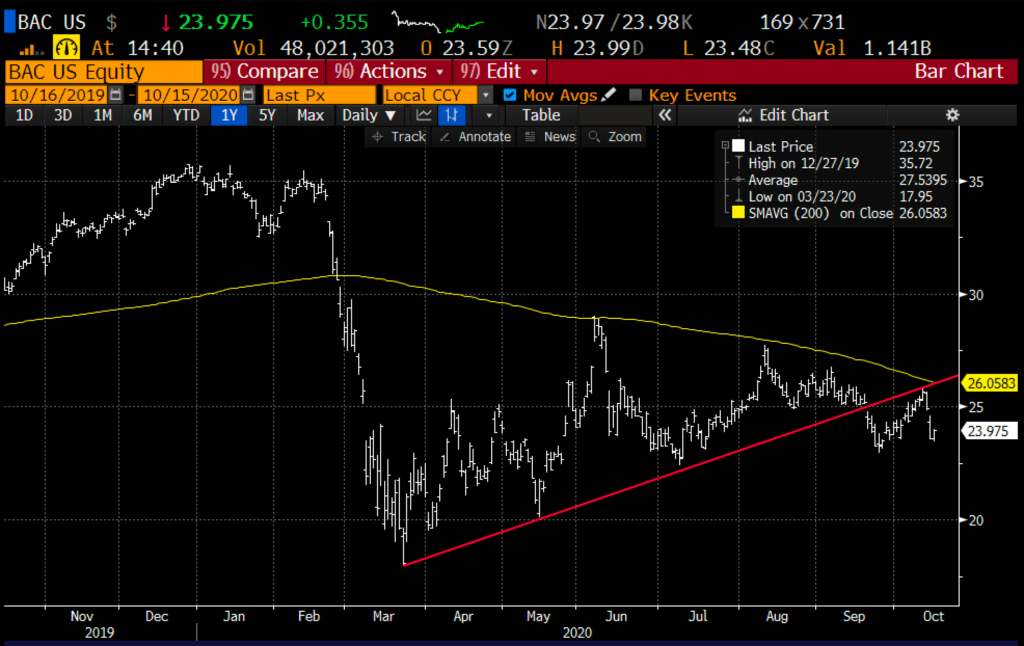 I would also add that while Citi (C) and Wells Fargo (WFC) fared just as poorly this week post-earnings as BAC, JPM, considered best of breed of the money-center banks has held its own, but also faces near-term technical resistance at its 200-day moving average just below $105: 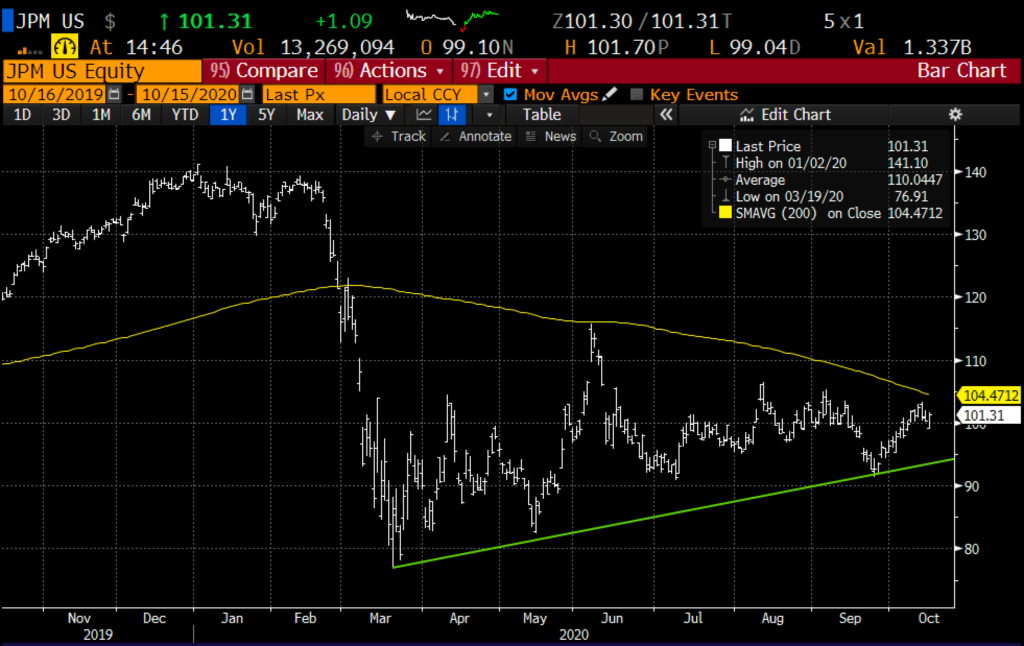 So what’s the trade? If it looks like we are going into the weekend without a stimulus deal and we are within 2 weeks to the election early next week the likelihood will not be great for a deal before the election and that could weigh on the stock’s near term possibly presenting the opportunity to buy JPM near its uptrend in the mid $90s and MS near supporting the highs $40s.

I’ll be sure to check back on the group early next week.